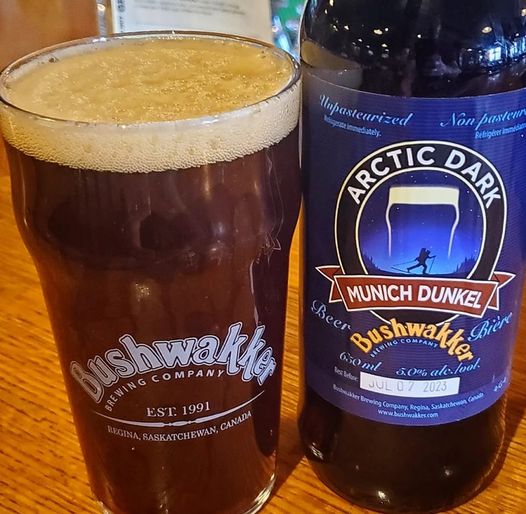 We haven’t seen this beautiful brew in a few years. (Damn pandemic!) Our ARCTIC DARK MUNICH DUNKEL is our take on the classic German dark lager style. Balanced toward the malt with a toasty caramel nuttiness. It’s rich yet approachable with a touch of chocolate and plenty of malt complexity. 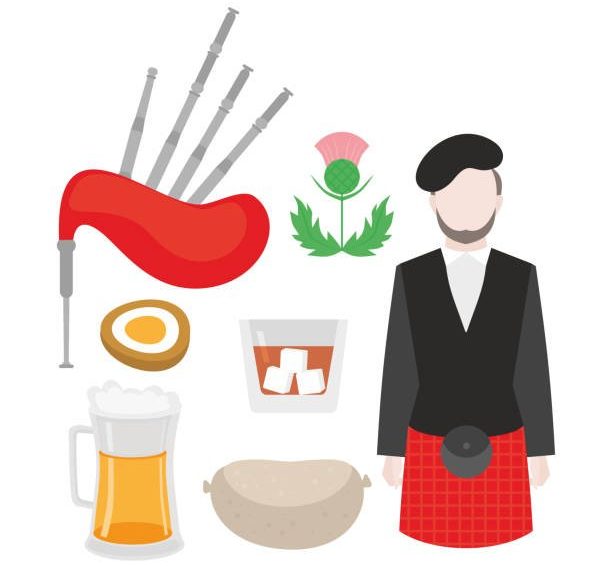 Free haggis, men in kilts,  a firkin of Scottish beer and birthday cake? After a three-year hiatus our Bushwakker & Robbie Burns combined Birthday Bash is back on Saturday, January 21st!

JANUARY PREMIUM WINE FEATURES: This month’s wine features are the LES JAMELLES wines from southern France. The white wine is their SAUVIGNON BLANC and the red is their MERLOT. Both are $7.95 for a glass and $21.95 for a half litre. 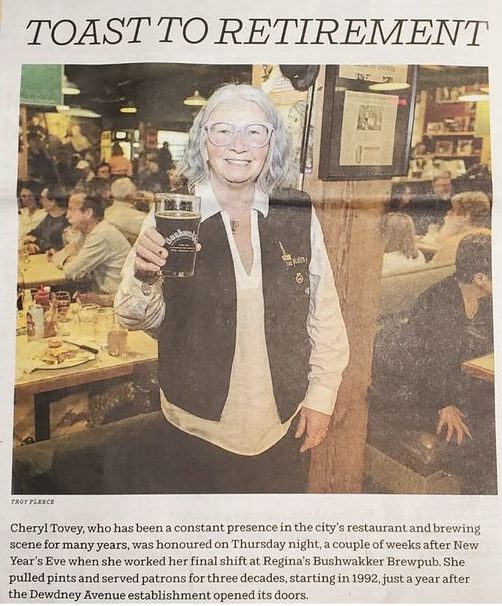 Much thanks to the Regina Leader Post for last Saturday’s front page story honouring one of our own! Congrats to floor manager, Cheryl Tovey, on your Bushwakker retirement. There is no point in having great beer and great food without great service. Your Bushwakker service protocols will be carried forward for years to come! Cheers to the most popular woman in Regina! 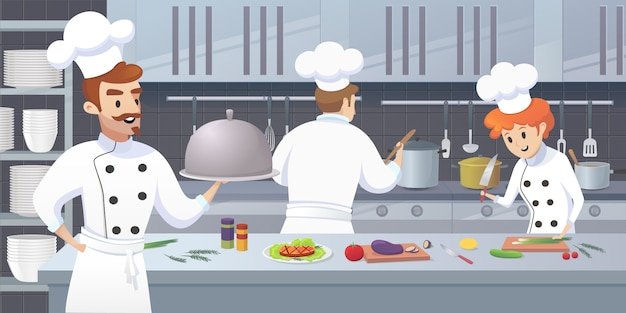 WE ARE HIRING! The busy winter season is here! We need full and part-time cooks. Stop by with your resume today or email it to kelly@bushwakker.com 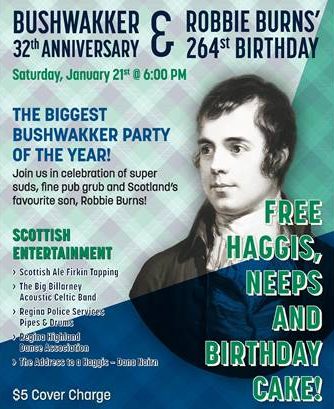 Jan. 21: BUSHWAKKER & ROBBIE BURNS COMBINED BIRTHDAY BASH. After a three-year hiatus, we are excited to bring back one of our biggest parties of the year. Come celebrate 32 years of fine pub cuisine and fine Bushwakker beers along with the 264th birthday of Scotland’s favourite son, Robbie Burns! (Psst! He’s the guy who wrote Auld Lang Syne.) Enjoy a special firkin of Scottish brew infused with oak and Robert Burns Single Malt Scottish Whisky, a performance from The Regina Police Services Pipes & Drums and The Regina Highland Dance Association as well as huge acoustic Celtic act, Billarney. Witness the Address To a Haggis from Dana Nairn complete with complimentary haggis, neeps and birthday cake! $5 cover charge in effect. Plan to arrive early to get a seat. 6:00 PM. 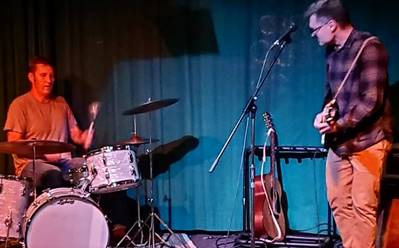 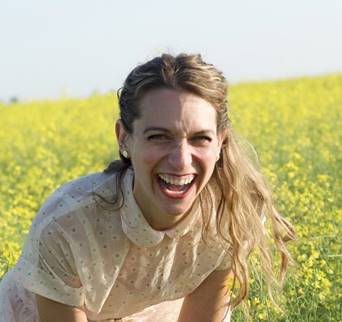 Jan. 25: Wednesday Folk Night. DARA SCHINDELKA. Described as possessing, “the voice of an angel with the power of a freight train.” Back for an encore performance. 7:30 PM – 9:00 PM.

Editor’s note: Although this article was first released one year ago, we felt it was worthy of sharing given this Saturday night we will present our Bushwakker 32nd and Robbie Burns 264th combined Birthday Bash. Free haggis, beeps and chocolate birthday cake will be served. Our Scottish beer offerings will include a firkin of Ilse of Arran Robert Burns Single Malt Scotch Whisky and Oak – infused Scottish Strong Ale as well as bottles Innis and Gunn Caribbean Rum Cask Scottish Red Ale.

World famous haggis producer, Macsween, have been making Haggis for nearly 70 years with the top secret haggis recipe having been passed down through three generations of this family run business.

Whilst the specific ingredients are a closely guarded secret James Macsween, managing director and the grandson of the founders Jean and Charlie Macsween, hand delivered a pre-mixed batch of spices, used to create this unique Haggis Spiced Pale Ale.

Macsween of Edinburgh produces 1000 tonnes of haggis annually. Around a third is eaten over Burns equating to 1.6 million portions of haggis being consumed celebrating Rabbie Burns.

The spices in haggis lend themselves perfectly to a Spiced Pale Ale and Cold Macsween Beer is a full bodied, balanced pale ale brewed with Scottish malted barley and oats alongside a pinch of the Macsween’s secret spice blend. 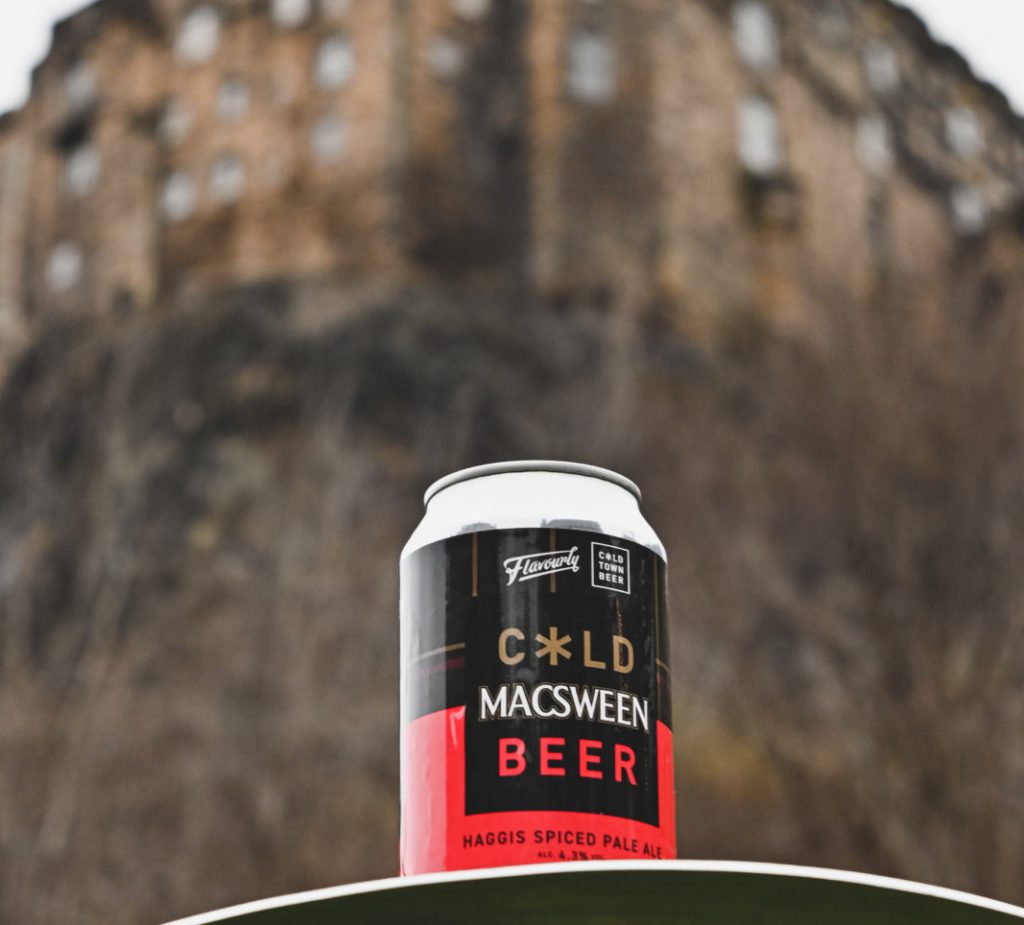 The Cold Macsween Beers will also feature in two exclusive mixed Scottish cases including beers from other notable Scottish breweries such as; Tempest Brewing Co, Loch Lomond Brewery and Glasgow Beer Works and priced at £29.95 for 20 or £59.95 for 32 beers.

My Scottish girlfriend was feeling homesick so I decided to try and make a homemade haggis to cheer her up.

I thought I had a fairly strong constitution but as soon as I starting mixing the heart, lungs and kidneys, I then realized I didn’t have the stomach for it. 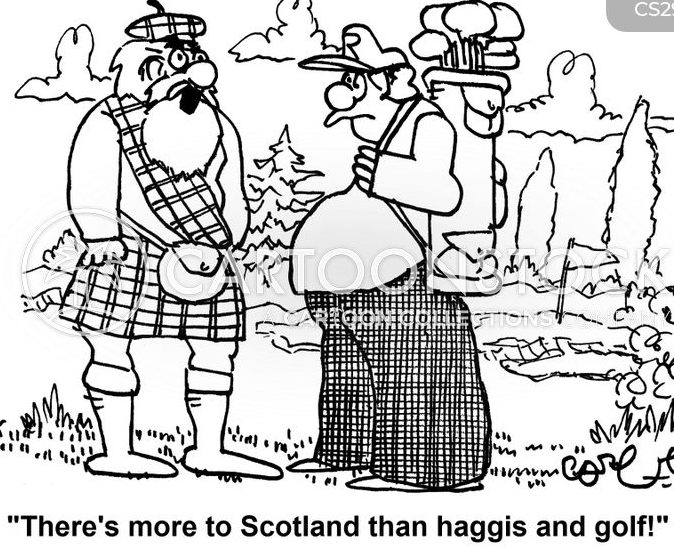 We couldn’t agree more! How could anyone forget about the delicious Single Malt Scotch Whisky?! See you at our Robbie Burns/Bushwakker Birthday Bash on Saturday, January 21st! 6:00 PM.