BREWERY “HOPP”ENINGS: Bushwakker Head brewer, Michael Gaetz, reports that our new PONCE DE LEON BLACKBERRY RASPBERRY WHEAT, SUMMER WHEAT and KAI’S MUNICH HELLES are currently available on tap, in our offsale and for growler fills too. A batch of HARVEST OKTOBERFEST LAGER as well as our GREAT PUMPKIN SPICED BROWN ALE are making their way through the brewery. In addition to taking our beer home in glass bottles and 2 litre jugs direct from our brewpub, you can find a varying selection of 650 ml bottles of Bushwakker beer in a number of REGINA SLGA stores. 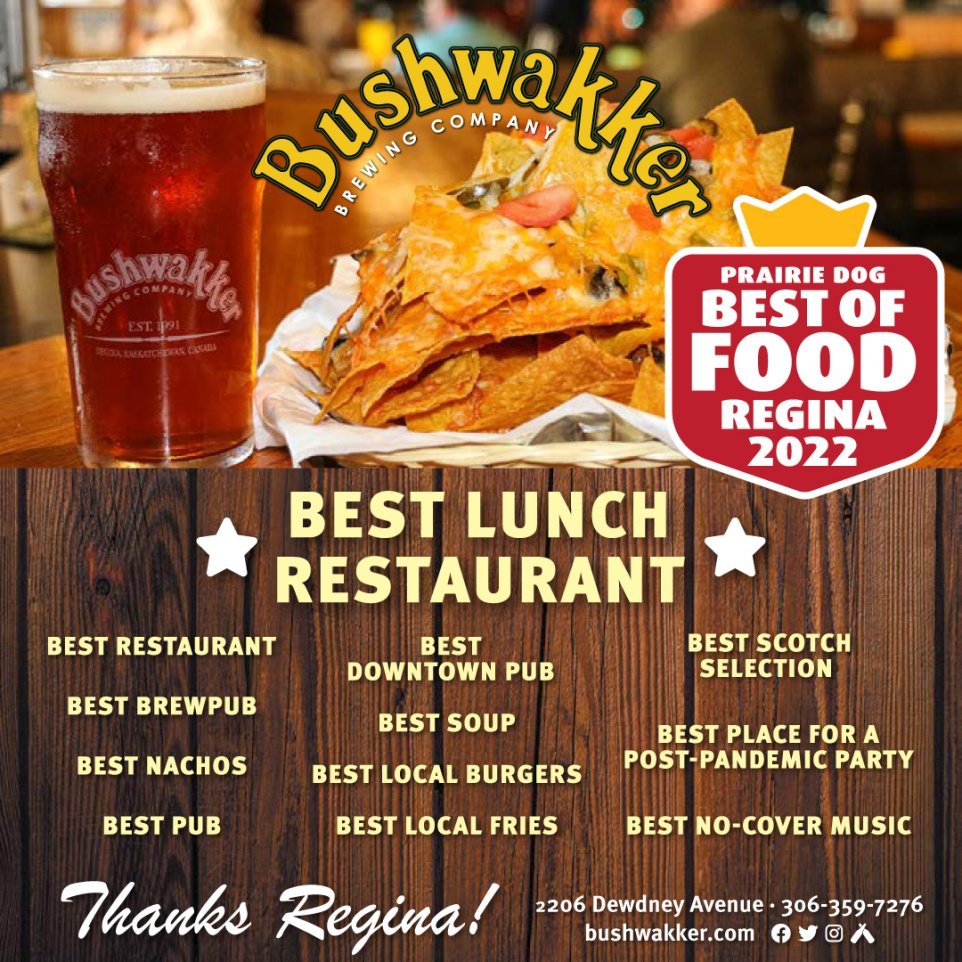 Thank you Regina! Of the dozen wins we received in the 2022 “Best of Food” Regina Awards, the BEST LUNCH RESTAURANT is a great testament to our talented kitchen team as well as to the many folks who live and work in Regina’s Warehouse District. For almost 32 years we have been serving up delicious lunches fast and fresh. The skills of our staff are put to the test when meeting the needs of our guests when they only have one hour for a lunch break. Don’t forget you can always reserve a table for lunch and we open at 11:00 AM so you can beat the crowds if you can sneak away from work early!

Our SASK CRAFT GUEST TAP is currently pouring a DOUBLE IPA from Swift Current’s Black Bridge Brewery. Next up is the SEASON OF THE WITCH New England IPA from Regina’s Malty National Brewing. 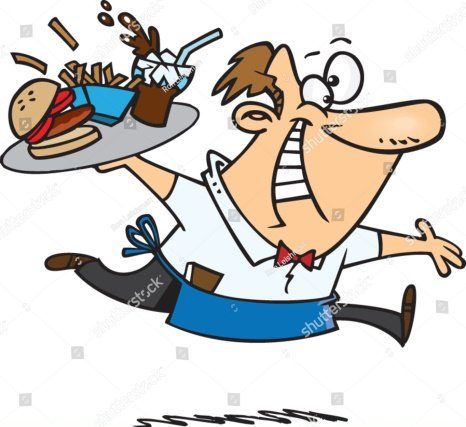 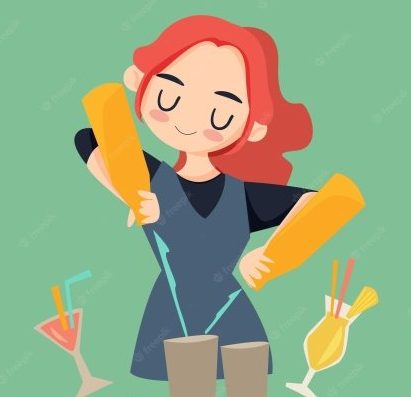 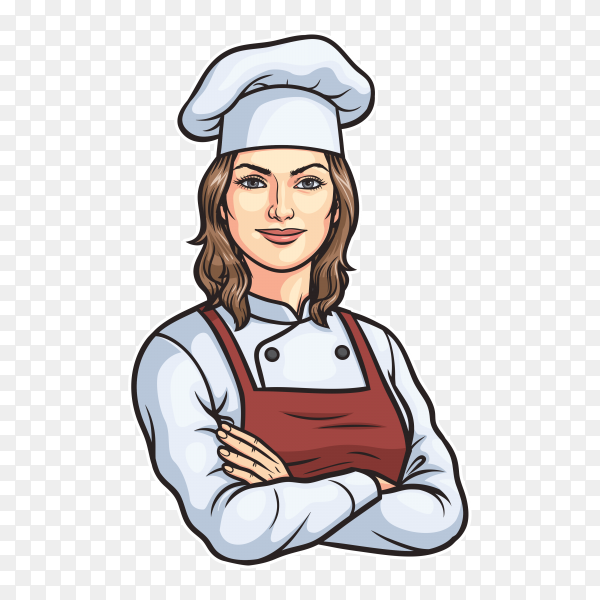 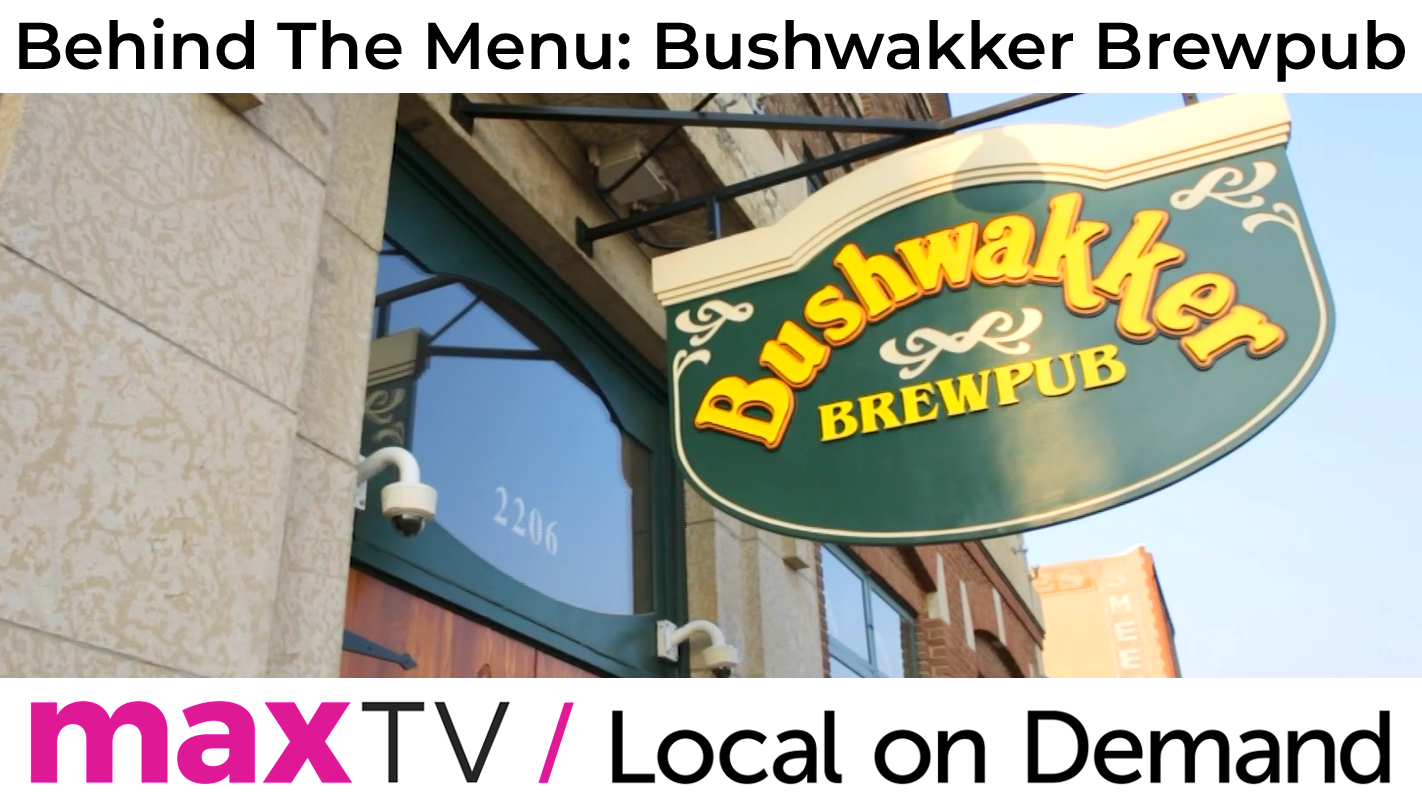 To watch the video on maxTV go to Video on Demand > Subscriptions > maxTV Local > Sk Stories.

Stay tuned to our social media for the online premier later in September. 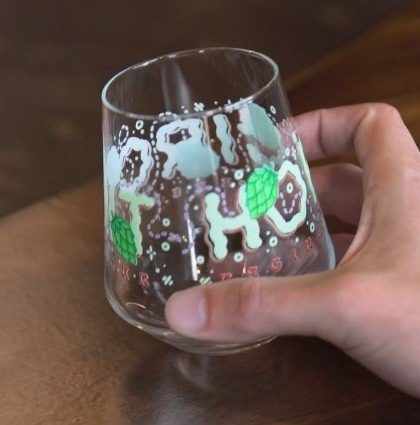 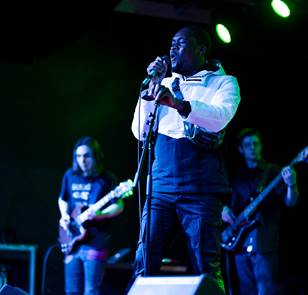 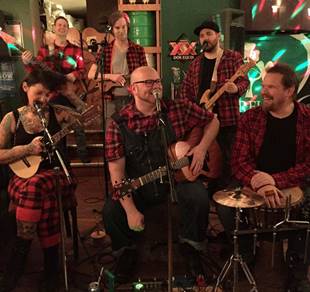 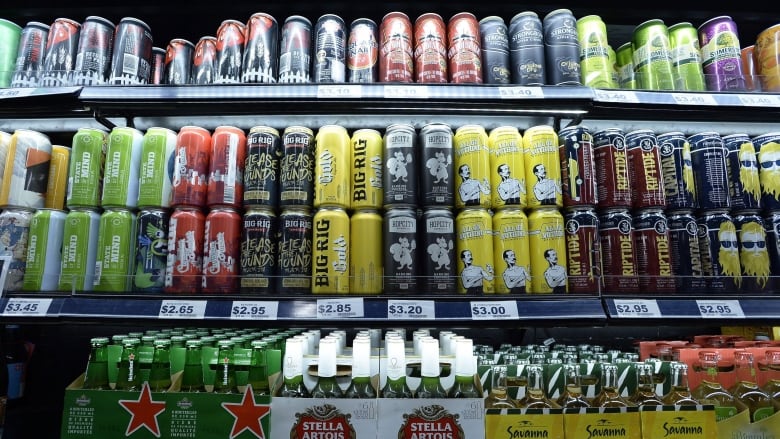 Beer, including Ontario craft beers, are shown at a grocery store in Ottawa in this August 2018 photo. Tall cans make up 80 per cent of craft beer sales in the province, according to the LCBO. (Justin Tang/The Canadian Press)

Anyone walking through the beer aisles of their local liquor shop will be familiar with the scene: rows and rows of local craft beer, swathed in distinctive and often colourful logos and art — all in tall, 473-ml (or 16-oz.) cans.

The tall can — also known as the tallboy, king can or pounder — isn’t new. Milwaukee-based Schlitz Brewing Company started selling them in the 1950s.

But it’s become an increasingly popular size for craft beer, a category that has mostly eschewed the smaller 355-ml cans and glass bottles in recent years.

According to beer brewers, the tall can’s popularity is more than just the appeal of having more to drink per can.

Haydon Dewes, co-founder of Cabin Brewing Company in Calgary, says the cost of a tall can versus a short can is “negligible,” at least in terms of the additional aluminum required to produce it.

The real reasons are more about marketing, brand awareness and craft beer trends that go back at least a decade.

“It’s us saying: we are craft beer, we’re not a macro beer. We don’t put our beer into short cans and put it into a box of 36. This is a premium product that comes in a four-pack,” Dewes told Cost of Living.

Dewes says the four-pack for tall cans has become a craft beer standard, because of long-held expectations on how much packs of beer costs.

“A four pack is about the same volume as a six pack … and the cost works out roughly the same as well,” he said.

It also helps distinguish it from non-craft brands that sell smaller cans in higher volume.

“There’s something, for better or worse, quite exclusive about a four-pack. It’s like if you see a four pack of tall cans, you know that that’s a craft beer. If you see a box of 12 short cans, your brain is telling you: ‘That’s a budget beer. That’s got to be cheaper, surely.’ ”

Tall cans are also popular among many non-craft beer brands, the LCBO noted, accounting for 60 per cent of sales in that category.

Having a larger can means more real estate to cover with distinctive art and logos that make an instant impression and tell customers exactly what they’re getting.

“We also have to tell people what’s the name of that beer, what kind of beer it is, and also our brand, all sort of on one space on the side of the cans,” said Pete Nguyen, a partner and chief creative officer at Edmonton’s Sea Change Brewing Co.

A man kills a deer and takes it home to cook for dinner. Both he and his wife decide that they won’t tell the kids what kind of meat it is, but will give them a clue and let them guess. The dad said, “Well it’s what Mommy calls me sometimes.” The little girl screamed to her brother, “Don’t eat it. It’s an asshole! 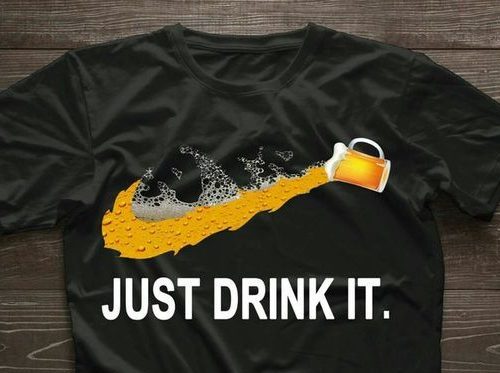