BREWERY “HOPP”ENINGS:  Bushwakker Head brewer, Michael Gaetz, reports our extremely popular seasonally available PONCE DE LEON BLACKBERRY/RASPBERRY ALE is now on tap, in our offsale and available for growler fills too! A batch of KAI’S MUNICH HELLES and a batch of JUST PEACHY BLONDE ALE are also making their way through the brewery.  In addition to taking our beer home in glass bottles and 2 litre jugs direct from our pub, you can find a varying selection of 650 ml bottles of Bushwakker beer in a number of REGINA SLGA stores.

Our SASK CRAFT GUEST TAP is currently pouring the Pile O’Bones AMERICANO COLD BREWED STOUT. Next up is the HALF DARK AMBER CZECH LAGER from Swift Current’s Black Bridge Brewery.

APRIL PREMIUM WINE FEATURES! This month’s featured wines are from South Africa. The red is BRUCE JACK SHIRAZ and the white is THE WOLFTRAP VOIGNIER/CHENIN BLANC/GRENACHE BLANC. Both are $8.50 for a glass and $22.95 for a half litre. 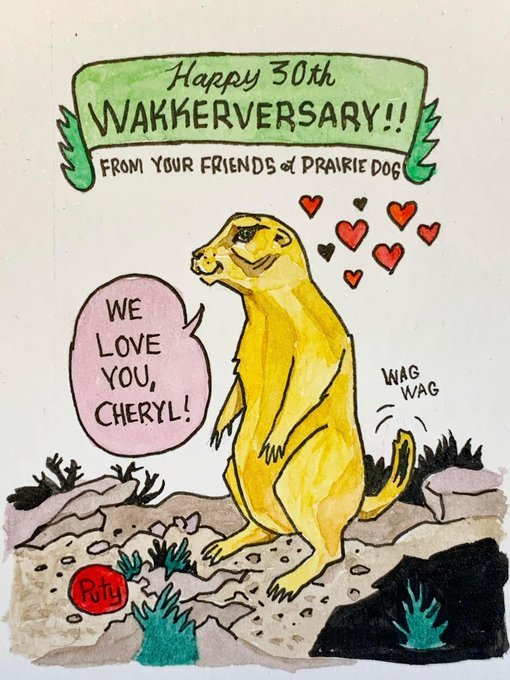 Thanks to the many of you who braved the blizzard and took part in Cheryl’s 30th Bushwakker Anniversary last week. Y’all knew how to make a girl feel plenty special! 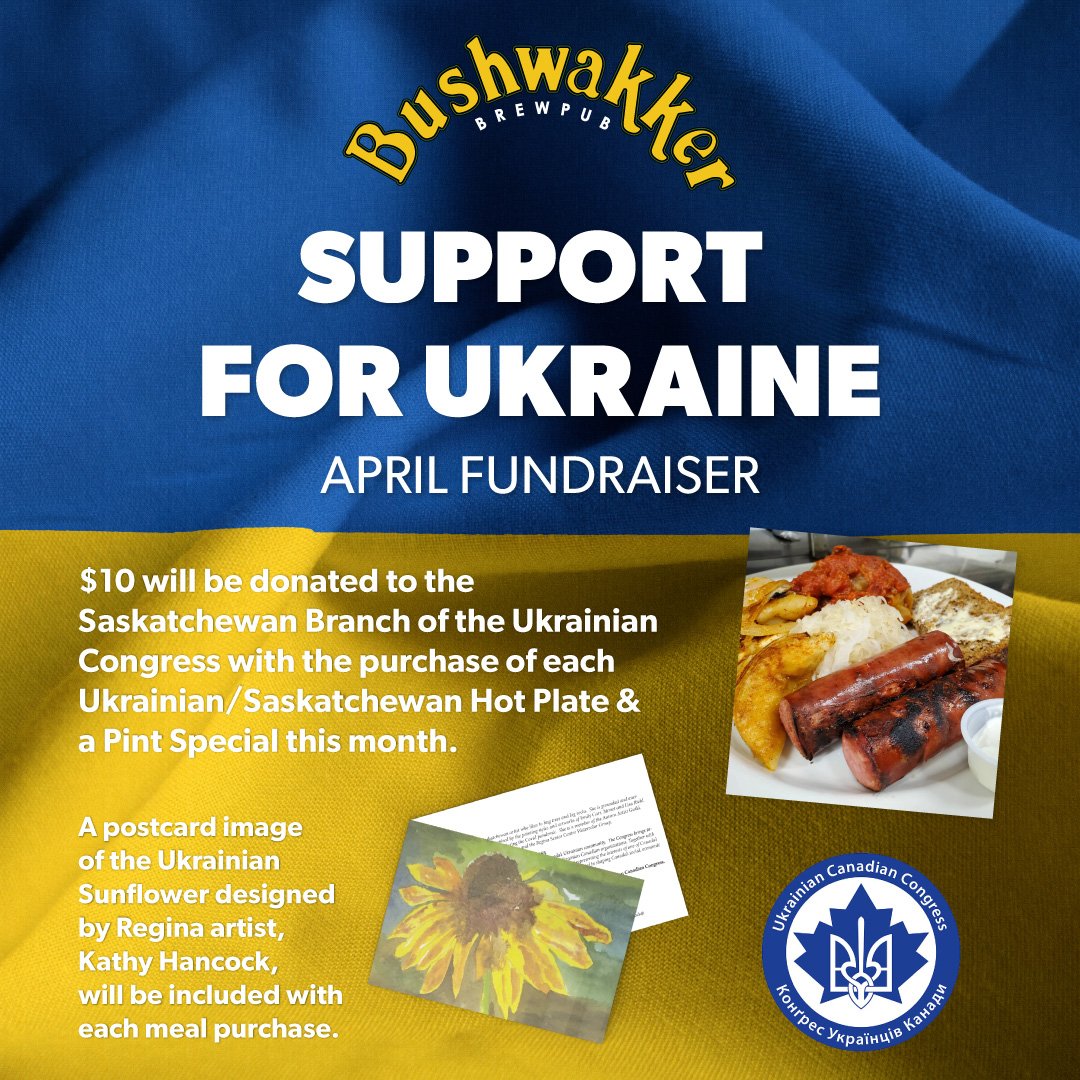 SUPPORT FOR UKRAINE APRIL FUNDRAISER. One of our longstanding Bushwakker Signature dishes is our Saskatchewan Hot Plate. We often hear our customers refer to this dish as being the Ukrainian Plate. It features perogies, house-made beer bread, house-made cabbage rolls, fresh sauerkraut and koubassa from the Ukrainian Co-op. For the month of April we will offer a Hot Plate & a Pint fundraising feature where $10 from each combo will be donated to the Ukrainian Canadian Congress of Saskatchewan to assist the Ukrainian people both here at home and in the mother country. Local artist, Kathy Hancock, has also donated postcards of her Ukrainian Sunflower (the national flower of Ukraine) which will be included with each meal purchase. Posters are also available and proceeds will be donated to the Ukrainian Congress. 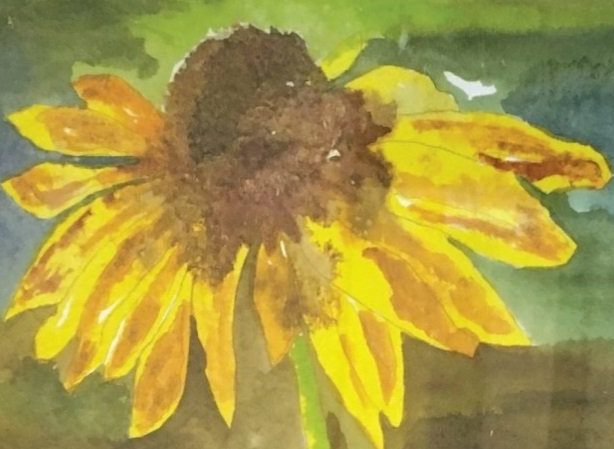 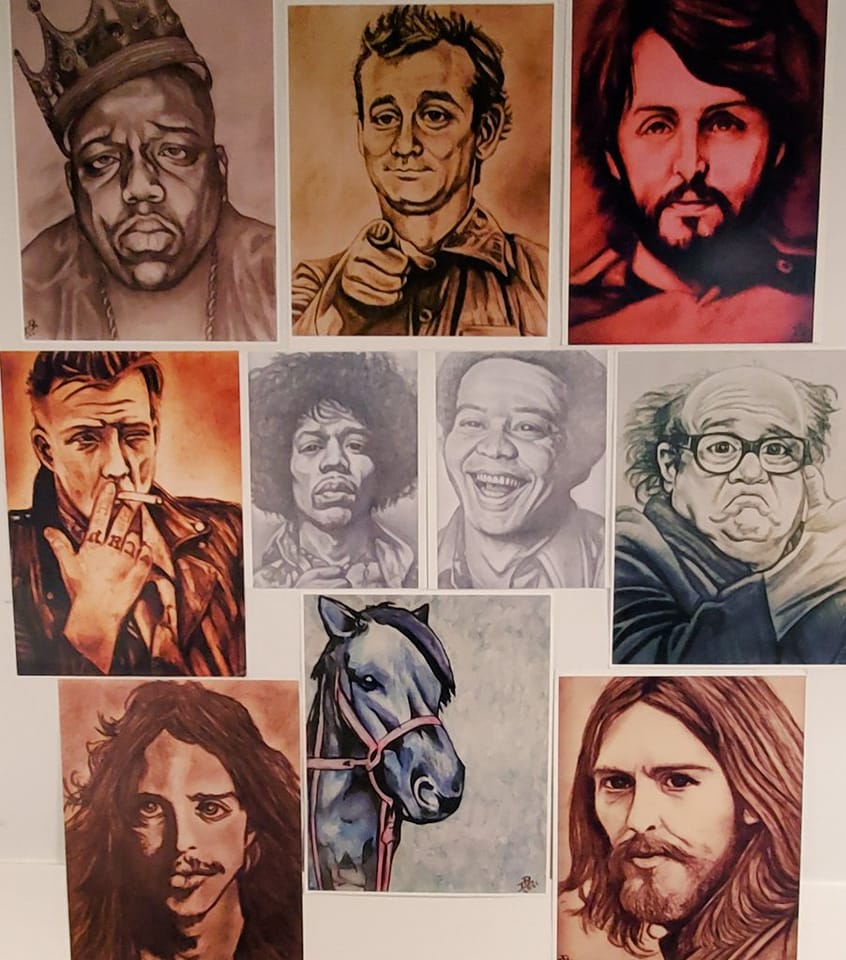 Local artists, Kathy Hancock and Dustin Ritter, are selling a selection of unframed prints for $20 each. Kathy also has 8” x 10” Sunflower For Ukraine prints for $10 and postcards for $5.00. All proceeds will go to the Ukrainian Canadian Congress of Saskatchewan. Hurry down and pick up your prints before they are all gone! 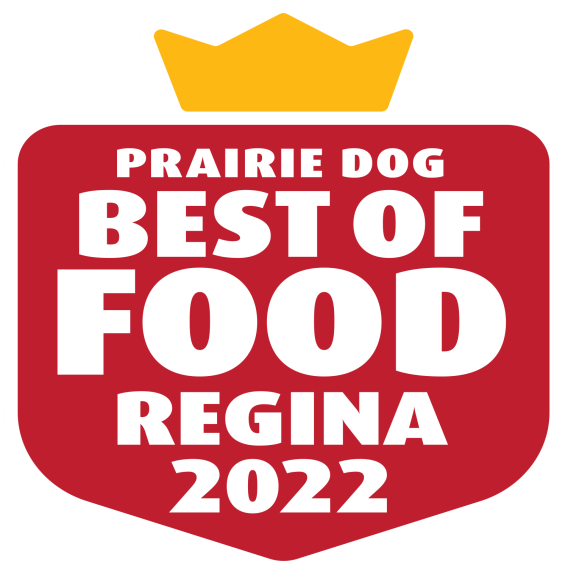 FINAL WEEK TO VOTE! The 2022 “Best of Food Regina” nominees have now been selected. Thank you for nominating your Bushwakker in 18 categories this year including BEST: Brewpub, Restaurant, Pub, Beer Selection, Scotch Selection, Happy Hour, No-Cover Music, Local Burgers, Nachos, Local Fries, Veggie Burger, Lunch Restaurant, Gourmet Pizza, Wings, Salads, Soup, Downtown Pub and Best Venue For a Post-Pandemic Party! Be sure to turn those nominations into wins by voting in the easy and fun multiple-choice ballot. Just head over to prairiedogmag.com or hit the button below. Voting is open only until May 2, so don’t delay. Best of Food 2022 | Prairie Dog (prairiedogmag.com) 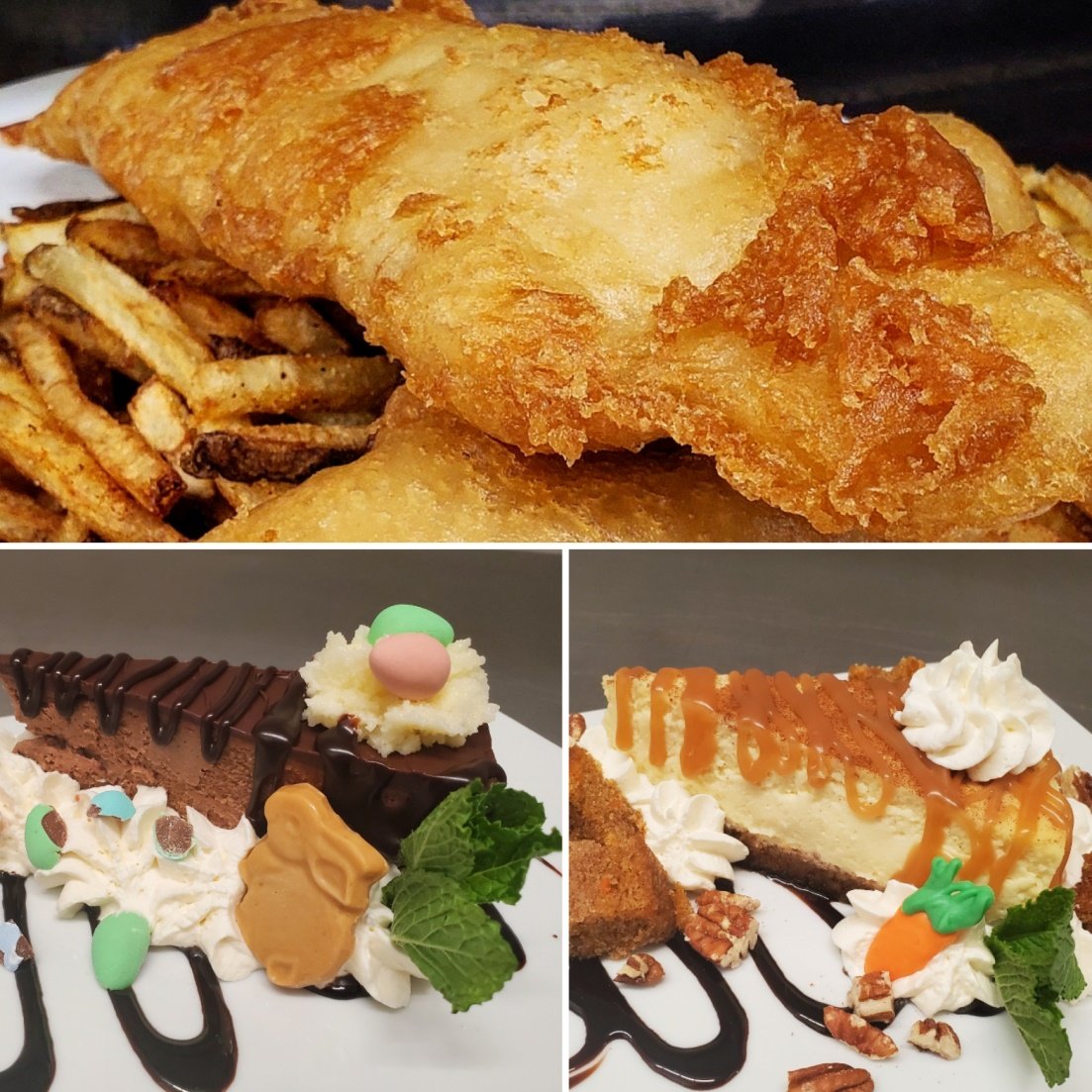 Last week’s FESTIVE FISH GOOD FRIDAY event was a fine success! Much thanks to the many of you who dined with us and much thank to those who chose our takeout option. The Carrot Cake/Chocolate Mini Egg Cheesecake Battle ended up with both desserts performing equally well. 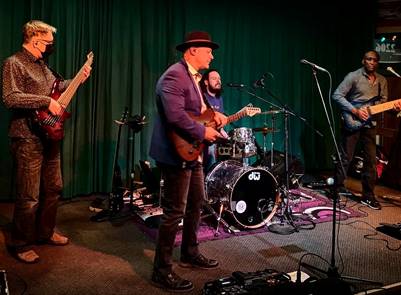 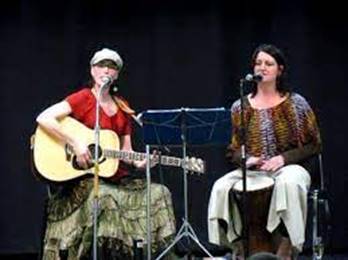 The government of Saskatchewan announced that the mandatory indoor masking health restriction will be lifted on March 1st. Bushwakker staff will continue to wear masks for the time being.

Proof of Vaccination is no longer required for restaurant dining. However, we have received many customer comments stating they will be reluctant to visit us because of the recent health restriction changes. To put our vaccinated customers who may have immunodeficiency concerns, family health concerns or simply are not comfortable with the latest easing of health restrictions somewhat at ease, we will make our Arizona Room available to them. Customers choosing to sit in this room will be required to provide Proof of Vaccination and ID. Both vaccinated and unvaccinated customers are most certainly welcome at Bushwakker and are invited to sit in the main pub area. Thank you to our legion of Bushwakker fans for your continued enthusiastic support!

Eight Metro Vancouver Breweries are Working Together to Aid Ukrainians, and You Can Help by Drinking Beer 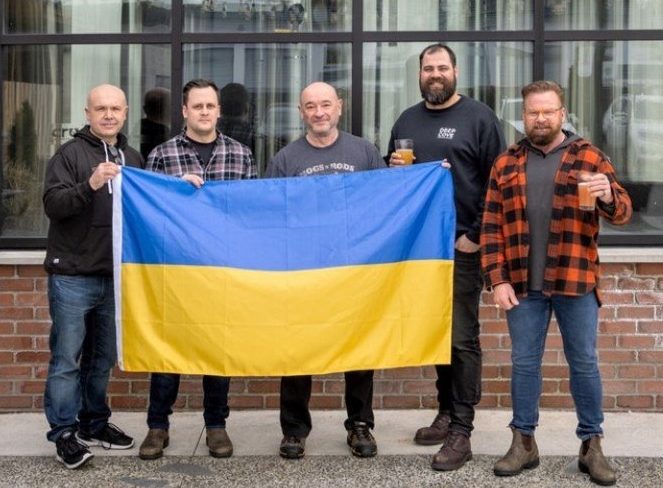 With the war continuing in Ukraine, brewers around the world are finding ways to help.

To do their part, Vancouver-area brewers gathered in late March to brew a special beer, a Ukrainian Golden Ale. The group, organized by PoCo Brothers Brewing’s head brewer Rick Dellow, tackled beer with a direct link to Ukraine.

“Rick from PoCo was instrumental in setting this up and putting the team together,” says Vancouver’s Main St. Brewing owner Nigel Pike, which also participated. “We’re really proud of what he’s done.”

It’s not just a style of beer that the group brewed, it’s a specific recipe from a brewery in the Ukrainian city of Lviv. Pravda Beer Theatre uploaded some of their best-known recipes for other breweries around the world to make and encouraged them to use the sales to make donations.

And that’s just what’ll happen with the locally brewed version. Proceeds from the Metro Vancouver brew will go to the World Central Kitchen (WCK), which is supporting and providing food to people in Ukraine during the war.

It wasn’t the easiest process, Pike notes, as the recipe they downloaded had to be deciphered.

“They were struggling to find someone to translate it because all they got was this brew sheet and half the words didn’t make sense,” he says. “They managed to narrow it down.”

He notes that the interpretations will make for a Vancouver version of the beer now being brewed globally.

“It’s like recreating a dish from another country,” Pike says. “It’s always going to take on its own little unique style; Rick’s a good brewer, he’ll do them proud.”

Dellow is getting a lot of help along the way. Joining PoCo and Main Street either in brewing or other ways are R&B Brewing and Brassneck Brewery from Vancouver; Boardwalk Brewing and Tinhouse Brewing from Port Coquitlam; Deep Cove Brewers and Distillers in North Vancouver; and Five Roads Brewing Company out of Langley.

“We like to do these collaborative things with the other breweries,” says Pike. “We’ve been able to raise a lot of money for different causes over the years; that’s one thing about the brewing community, it comes together nicely and works together as a team.”

Soon the public will be able to do their part by buying pints of the golden ale at the breweries’ tasting rooms. Each of the participating places is ordering four kegs from PoCo brothers, with proceeds from that going to the donation. On top of that, when the beer is purchased at the breweries, an additional $2 per pint will be donated.

Pike estimates they’ll raise $1,400 per brewery, plus the proceeds from the kegs, meaning over $11,000 will likely be donated. He notes there are talks going on about a second round, but they’re not sure who would have room for the batch.

“We’re thinking (it’ll be on tap) the third week of April, depending on how it turns out,” he adds.

I remembered the time I took my daughter out for her first drink. Off we went to our local bar only two blocks from the house.

I got her a Guinness. She didn’t like it, so I drank it.

Then I got her a Killian’s. She didn’t like that either, so I drank it.

I thought maybe she’d like whiskey better than beer so we tried a Jameson’s; nope!

In desperation, I had her try that 25 year old Glenfiddich. The bar’s finest scotch. She wouldn’t even smell it. What could I do but drink it!

By the time I realized she just didn’t like to drink, I was so drunk I could hardly push her stroller back home! 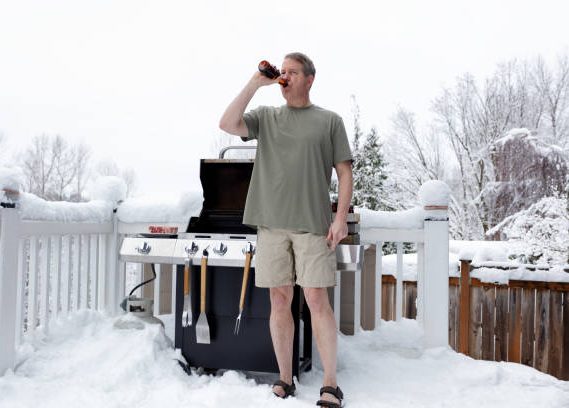