BREAKING NEWS! Thank you to the so many of you who have expressed interest in purchasing our 30th Anniversary limited edition American Barleywine bottles. We suspect we could have sold all 300 of them many times over well in advance. Because of the anticipated strong demand coupled with our aim of keeping you as safe as we can, we ask that all customers interested in purchasing bottles of our 30th Anniversary Ale come in through our back entrance at 11:00 AM. We will have a counter set up in the back common area of the building where bottle pick up and purchases can be made. Debit or credit card payment please. Please exit through the northwest exit of the building after making your bottle purchases. If you wish to re-enter the brewpub for lunch and a goblet or two (maximum of two per visit) of our 30th Anniversary Ale, please come around the building and use the front entrance. Thank you for your understanding and co-operation, for maintaining physical distancing and wearing a mask, and most importantly, thank you for your three decades of incredible support! 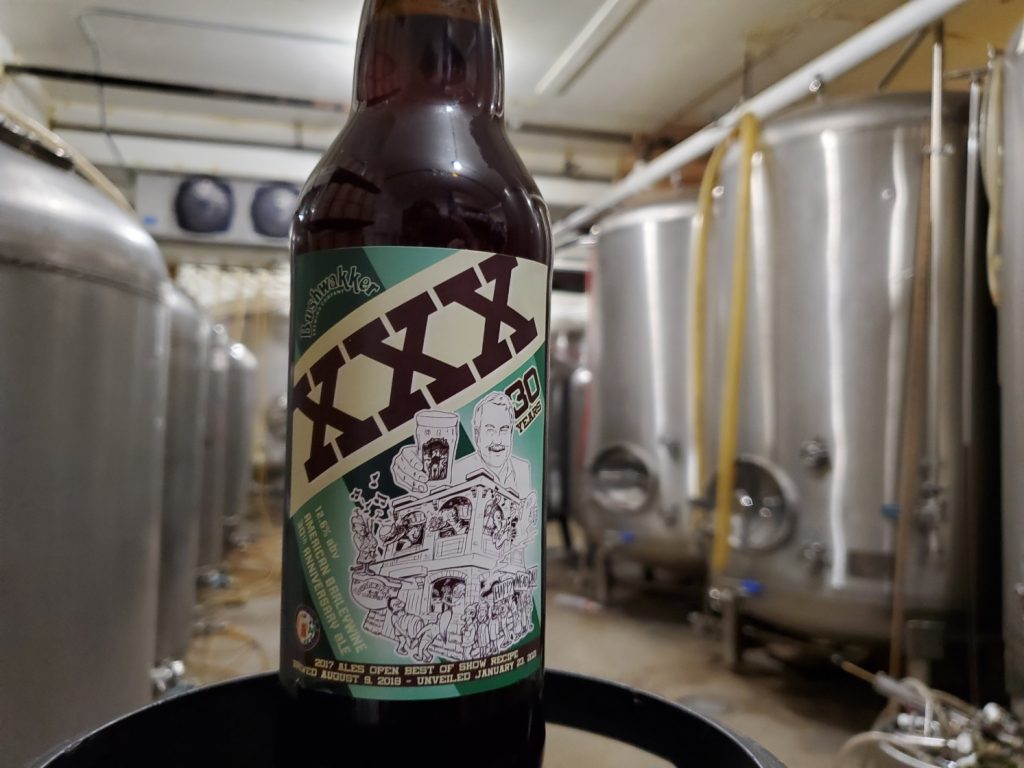 Our 30th Anniversary is finally here! On Saturday, January 23rd at 11:00 AM sharp our 30th Anniversary American Barleywine (12.6%) will be available on tap and in 300 limited edition wax-dipped bottles! Free Chocolate Beer Birthday Cake to everyone who dines with us that day! One of our most decadent locally-sourced dinner offerings will also be available. Details below.

This Friday’s Special Dining Feature on January 22nd is a CIOPPINO SEAFOOD STEW for $21.95. Our Saturday, January 23rd 30th Anniversary special is a locally sourced COFFEE-RUBBED BISON TENDERLOIN for $35.95. Our Saturday CLASSIC STEAK & A PINT SPECIAL for $21.95 will also be available. 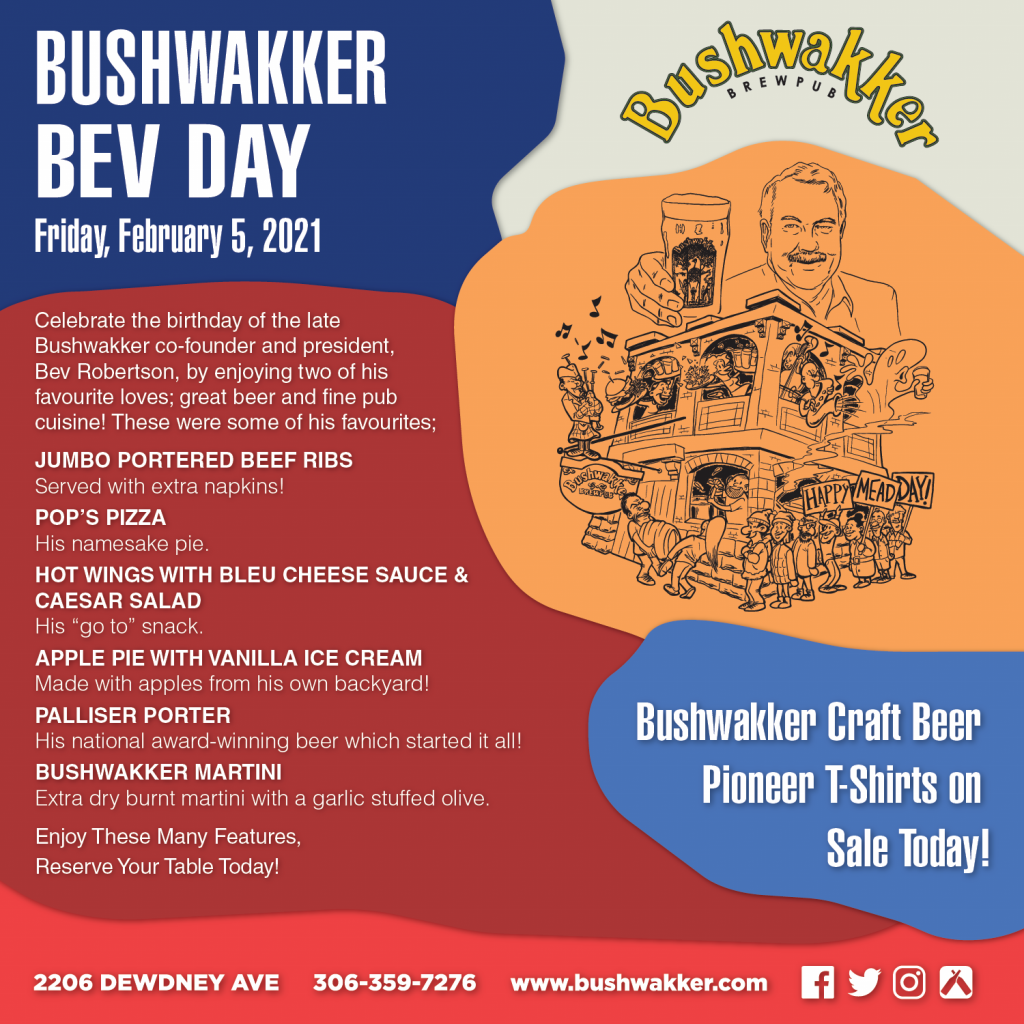 Join us as we celebrate the birthday of the late Bev Robertson. Bev was our co-founder and president as well as a Saskatchewan Craft Beer Pioneer. Join us in this day of celebration by enjoying some of Bev’s favorite dishes and drinks. Reservations accepted! 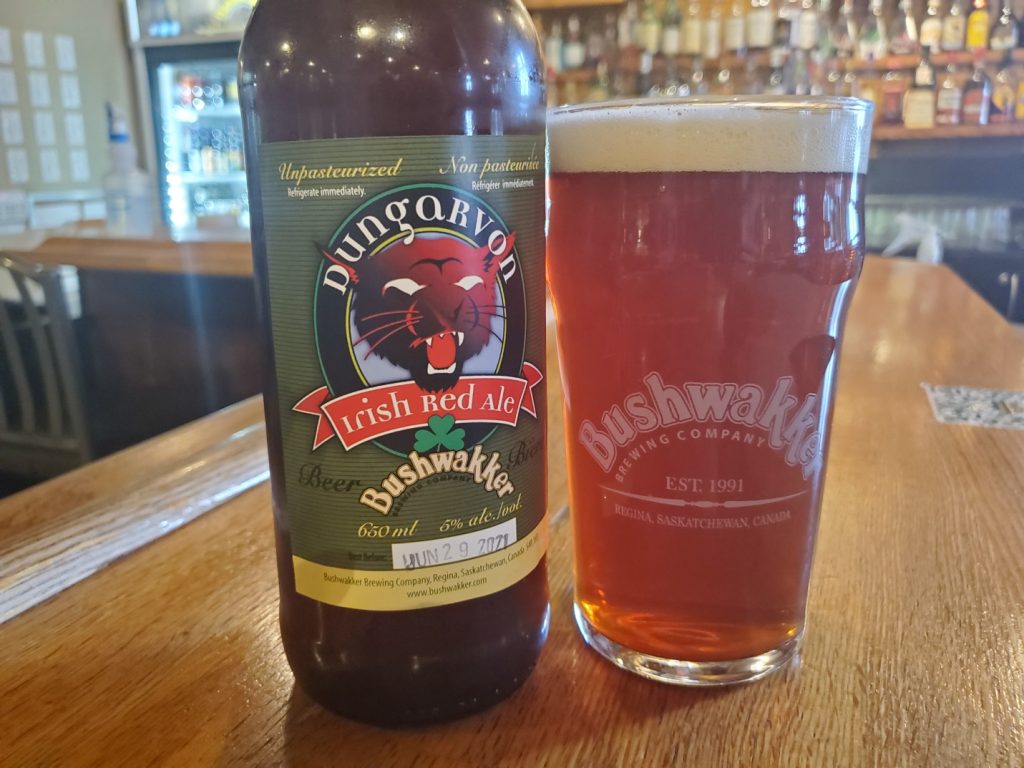 As we get ready for our 30th Anniversary on Saturday, January 23rd, we reflect on the unique circumstances which brought about our most popular beer of all time.

Back in the late 1990’s, the then serving Bushwakker head brewer was the late Brant Ross. Brant had recently wed and wished to introduce a new Bushwakker brew to commemorate the occasion. The beer was a balanced red ale and was made with a malt which was new to our brewery; honey malt. For those reasons it seemed appropriate that Brant would name his new brew, HONEYMOON ALE. Unfortunately, the beer did not resonate with Bushwakker beer drinkers and was only brewed for a short while before being discontinued. A few years later, our next head brewer; David Rudge who operates the Half Pints Brewery in Winnipeg, came across Brant’s Honeymoon Ale recipe and deemed the beer worthy of resurrection. After making some slight brewing tweaks, David and late Bushwakker co-founder, Bev Robertson, decided that the new name for this beer would be DUNGARVON IRISH RED ALE.  The beer was in the style of an Irish Red Ale and was named after the Dungarvon River found in Bev’s childhood province of New Brunswick. The label depicts an image of the elusive Dungarvon Whooper, which is rumoured to be an Eastern Puma. The blood-curdling screams heard a night along the river are said to come from either this ferocious feline or from the restless ghost of a murdered camp cook. Brant may have been ahead of his time when introducing his red ale to Reginans over 20 years ago, or perhaps one should never underestimate the importance of branding. Interestingly enough, his once forsaken brew grew to become the most popular beer in Bushwakker history!

There are many stories told on the Miramichi. The one that is best known is of the Dungarvon Whooper.

The story takes place in a lumber camp on the Dungarvon River. The Dungarvon is a part of the Renous River that runs into the Miramichi River. It is twenty miles from Newcastle. The lumbermen tell of a story of a young Irishman named Ryan. He was the cook at the Dungarvon lumber camp. All the men in his crew liked him. As well as being nice-looking, he was fun-loving and hard-working. The thing they liked best was that he could whoop and yell. He could do it better than anyone in the camp. Someone who could whoop was looked up to by the lumbermen.

Ryan was known to keep his money with him at all times. No one knew where the money had come from. They only knew that there was a lot of it. Each morning Ryan woke early in order to cook breakfast. When it was cooked, he would give a loud whoop. This would tell the men to come to eat. Ryan was then left alone for the day. The lumber crew and the camp boss went to work.

One day the camp boss stayed behind. When the lumber crew came back that day, the cook was dead. His money was gone. Some say that Ryan died from a sickness that came on him quickly. A second story tells us that the boss killed him by cutting his throat.

The men didn’t know the boss very well. They could not say if he had killed Ryan or not. No one knows what had taken place that day. The cook and the boss had been alone. There was no one to tell Ryan’s or the boss’s story. What mattered most to the men was that their friend was dead. This made them very sad.

That night it snowed very hard. It snowed so much that the men could not take Ryan far to be buried. They had to bury him by the Dungarvon Spring near the camp. After they buried him, they sadly made their way back to the camp. From the trees they heard wild yelling and whooping. This sound was not like Ryan’s happy whoops. The yells were the ones of someone being killed. It sounded like it was coming from where they had buried Ryan.

The men were driven from the lumber camp by the ghostly cries. More crews came to take their place. They were again driven away by the loud whoops. Lumber crews came and went for years at the Dungarvon Camp.

It is said that if a man answered the ghost, the sound would come closer. It would get louder as it came closer. When it was overhead, it was so loud it could deafen a man.

TIME OUT – New Bar in Town

In a small mid-western conservative town, a new bar/tavern started a building to open up their business. The local church started a campaign to block the bar from opening with petitions and prayers. Work progressed, however right up till the week before opening, when a lightning strike hit the bar and it burned to the ground.
The church folks were rather smug in their outlook after that, till the bar owner sued the church on the grounds that the church was ultimately responsible for the demise of his building, either through direct or indirect actions or means.
The church vehemently denied all responsibility or any connection to the buildings demise in its reply to the court.
As the case made its way into court, the judge looked over the paperwork at the hearing and commented, “I don’t know how I’m going to decide this, but as it appears from the paperwork, we have a bar owner that believes in the power of prayer, and an entire church congregation that doesn’t. 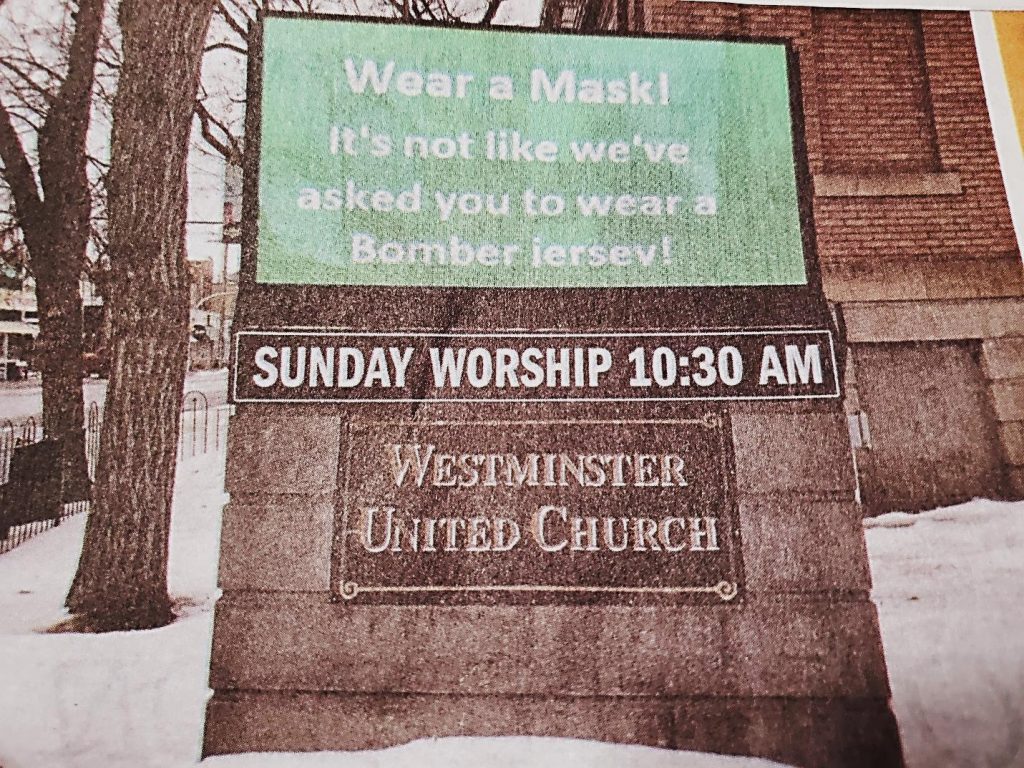 We couldn’t have said it better ourselves! How we miss the friendly pre and post home game banter with our Winnipeg friends.