Special Announcement: Effective Friday, November 6, 2020 under the Provincial Government Public Health Order for Regina, Saskatoon and Prince Albert, the use of non-medical masks is mandatory in most indoor public places including restaurants and bars, except while eating or drinking while seated in designated areas. We thank you for your continued co-operation in helping us to keep you safe and to protect our economy. 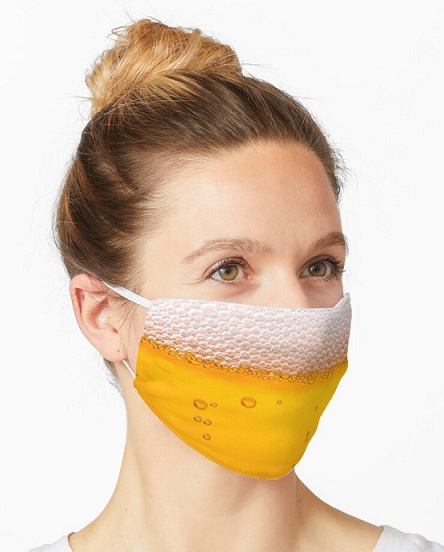 BREWERY “HOP”PENINGS! Bushwakker Head brewer, Michael Gaetz, reports our seasonally available Ponce de Leon Blackberry Raspberry Ale, Premium Pale Ale and Chinook ESB are currently on tap. There are also batches of Blackberry Mead (which will be released on Saturday, December 5th and bottles will be made available to pre-order on our website for curbside pick-up or take-out) working their way through the brewery. 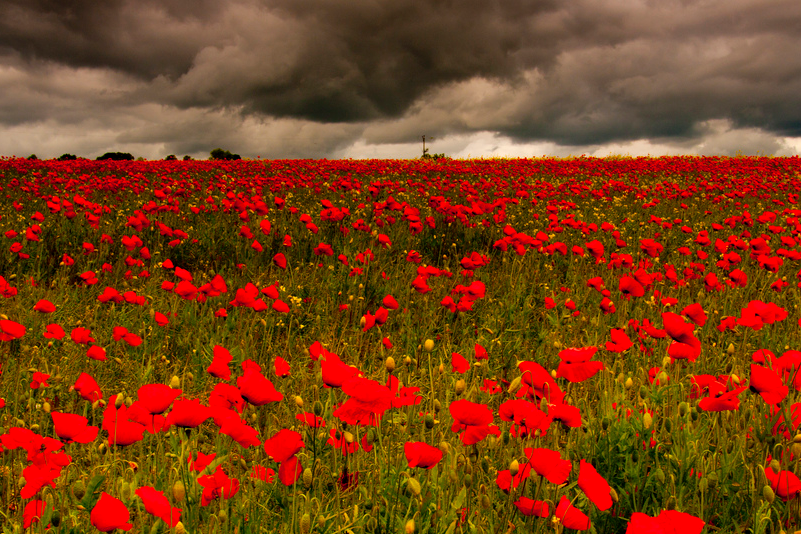 We will be open from noon to nine on Remembrance Day this Wednesday, November 11th.

This weekend’s Special Dining Feature for November 6th & 7th is Cajun Surf and Turf for $21.95. Our Saturday CLASSIC STEAK & A PINT SPECIAL for $21.95 will also be available. 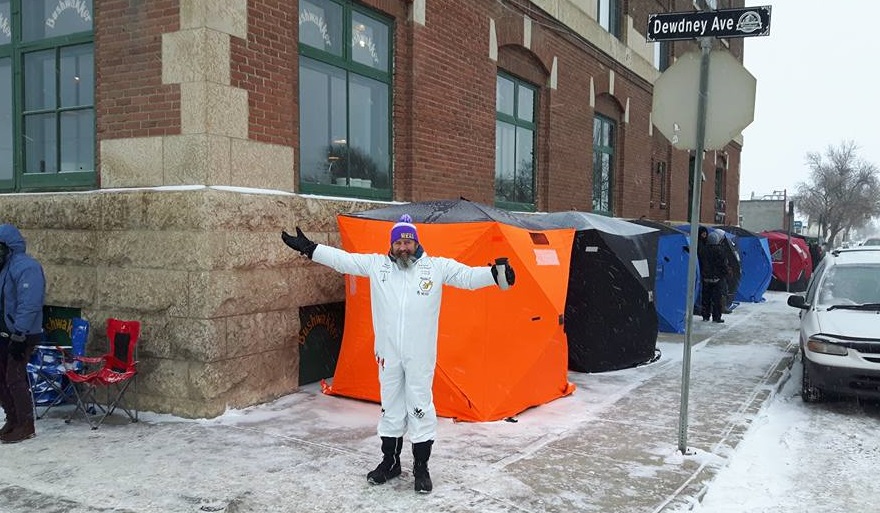 The winning entry in our MEAD MASK SLOGAN CONTEST was “BEE SAFE” submitted by Fred Sheppard of Calgary, Alberta. Fred has been a huge Bushwakker Mead fan for many years and is often the first person waiting in the mead line on the first Saturday of each December. On Mead Day he and his friends have previously dressed up as Vikings, voyagers and even astronauts as depicted in this “Mission to Mead” image. In these Covid times it is not permissible to have folks all lined up together. So this year advance mead purchases will be made available on our website. Just pick the quantity you would like and then select the time you will be at our back door. Please be sure to wear a mask when picking up your mead. Commemorative Mead Masks and T-shirts will certainly be available.

Please remember that reservations are accepted and are encouraged but we will no longer be able to accept dinner reservations on Friday and Saturday nights beginning on November 6th.  Call at 306-359-7276 to secure your table. Please note under current guidelines the maximum number of people who can be seated at the same table is limited to six. Larger reservations must occupy more than one table and maintain physical distancing between each table. 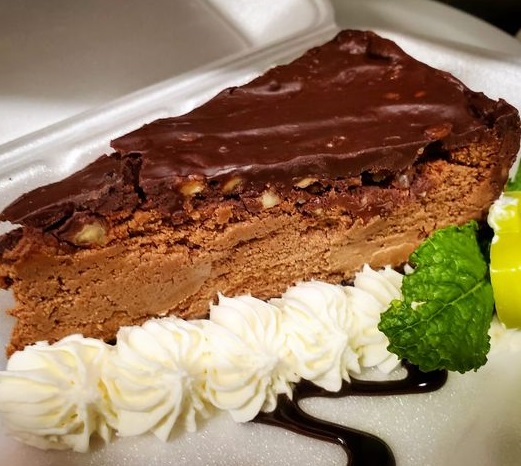 Hats off to Bushwakker assistant Pastry Chef, Justin Seitz! His Ferrero Rocher Cheesecake sold out in just over two hours. Watch for its return in the near-ish future! 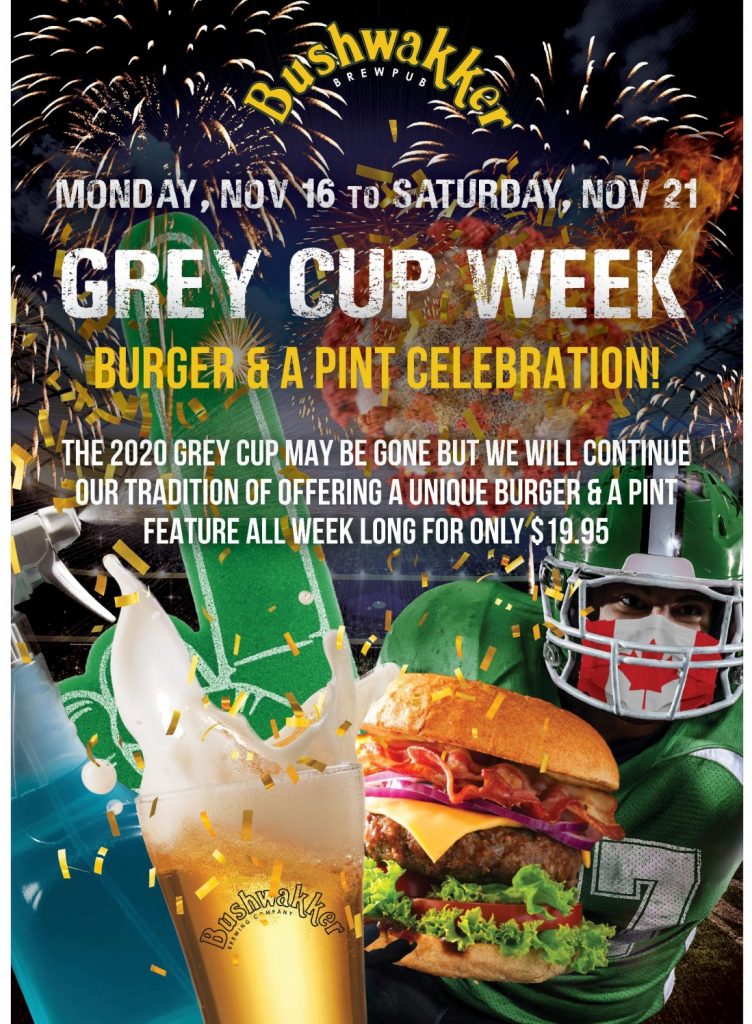 Our Football-themed Burger & a Pint Specials have been very well received this year. Can’t wait to see what our creative kitchen team will bring to the table (get it?) in mid-November!

Is Canada’s Craft Beer Industry Larger than the U.S.?

The whole world sees the American craft beer industry as both the pioneers of the movement and as the most dominant player. It is the largest, most influential and most boundary-pushing industry. It is the vanguard of craft beer around the world. Well, maybe not.

In my last post I offered up the most recent numbers on Canadian craft beer. While crunching those numbers I also compared them to the U.S. figures. And the results surprised me.

In short an argument can be made that Canada’s craft beer scene is, on average, as large or even larger than the U.S. Seem hard to believe? Stick with me for a bit.

I should mention I am sticking to conventional definitions of “craft” for simplicity sake here. I know we could spend paragraphs debating what counts as a “craft brewery”. I am not going there today (maybe another day). I am taking the Brewers’ Association at their word for the moment. Just so you know.

This isn’t new. The last time I did these calculations Canada also had more breweries per capita. But the point is worth repeating. We under-estimate the depths and breadth of craft beer in Canada.

I think we see these results because there is a great deal of divergence from state to state. We all know about the meccas of beer like Oregon, Colorado, Vermont and California. But for every bursting-at-the-seams region there is a Mississippi, Alabama and Louisiana. For example Mississippi has only 14 breweries (0.7 per capita). That moves the average. Canada also has a range, but it is without the extremes.

Even then, I think there is some propensity to over-state the strength of the U.S. industry. A case in point: California has 907 breweries. That sounds like a lot, but we need to consider its population (almost 40 million) is larger than Canada’s (37 million).

But What About Size?

A more important measure is what percentage of the beer market does craft beer hold. In the U.S. the Brewers’ Association reports that in 2019, craft beer captured 13.6% of beer sales by volume. They indicate about 19% imports and the remaining two-thirds belonging to the corporate brewers.

National figures are not available in Canada – Beer Canada does not break down domestic sales. It does report a similar level for imports – 16%. The question is what portion of the 84% is taken up by independent craft breweries.

We can make some extrapolations from provincial data. Reports suggest craft in B.C. is about 25% of the market. In Ontario is it plausibly 15%. I would expect similar numbers in Quebec, given the structure of their market and nationalist sentiments that would increase support for local breweries. Alberta is about 10% and the rest of the provinces are in single digits.

Add it all together and we can reasonably estimate that craft beer makes up about 15% of the Canadian market. So, slightly more than American craft breweries.

I recognize many American craft breweries export around the world, and most Canadian breweries do not. It is unclear whether the Brewers’ Association figures include production for export. If not, then this would increase American production figures, likely making it roughly equivalent to Canadian numbers.

The lack of reliable Canadian data makes it hard to be too vociferous in concluding that the Canadian craft beer industry is larger than the U.S. But I think the numbers we do have show that, at minimum, Canada’s craft beer scene is just as large as the Americans. At least when examined on a population basis.

You might be thinking this is largely an academic exercise. Common sense tells us that the U.S. has a much larger industry in real terms. They have more and larger breweries producing more beer than we do. The size allows for both economics of scale and greater innovation. The U.S. leadership in craft comes from the sheer size of its industry.

Maybe. To a certain extent that is true. But it might also be about who talks a bigger game. The U.S.,in general, is very good a self-promotion. And their companies (breweries included) are quite aggressive on a global scale. That, by itself, doesn’t make the beer taste better, nor does it make their industry more important. Canada’s breweries might be lower key and more domestically focussed, but I content they are every bit as innovative and attentive to quality as their compatriots to the south.

Q: What are some of the advantages of participating in a regular exercise program?
A: Can’t think of a single one, sorry. My philosophy is: No Pain-No Pain.

Q: If I stop smoking, will I live longer?
A: Nope. Smoking is a sign of individual expression and peace of mind. If you stop, you’ll probably stress yourself to death in record time.

Q: Aren’t fried foods bad for you?
A: Foods are fried these days in vegetable oil. In fact, they’re permeated in it. How could getting more vegetables be bad for you?

Q: What’s the secret to healthy eating?
A: Thicker gravy.

Q: Will sit-ups help prevent me from getting a little soft around the middle?
A: Definitely not! When you exercise a muscle, it gets bigger. You should only be doing sit-ups if you want a bigger stomach. 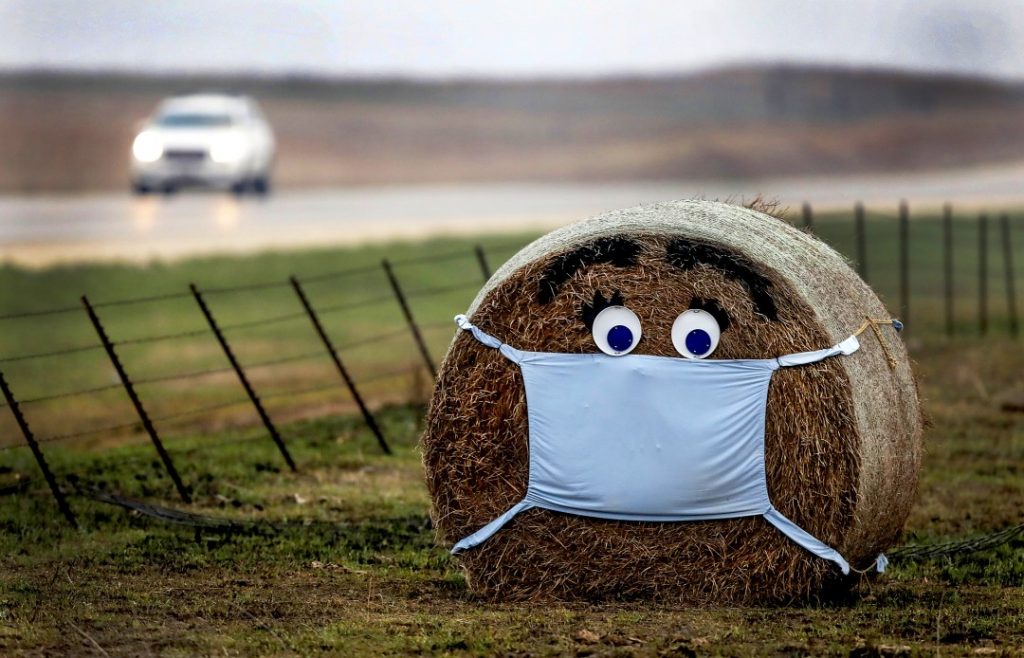 A sign of the times on the prairies this autumn. Stay safe everyone!