This weekend’s SPECIAL DINING FEATURE on August 28th and 29th is SMOKED ST. LOUIS BACK RIBS. Our Saturday CLASSIC STEAK & A PINT SPECIAL for $21.95 will also be available. 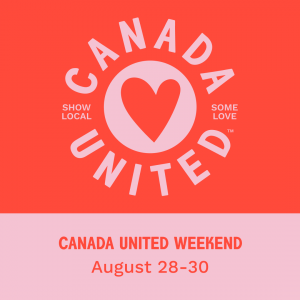 Would you like a chance to win $10,000? Canada United in an initiative to support local businesses and is giving away $250,000 in cash prizes. Dining at Bushwakker on August 28th and 29th can count as an entry! Visit gocanadaunited.ca/contestrules for more information. 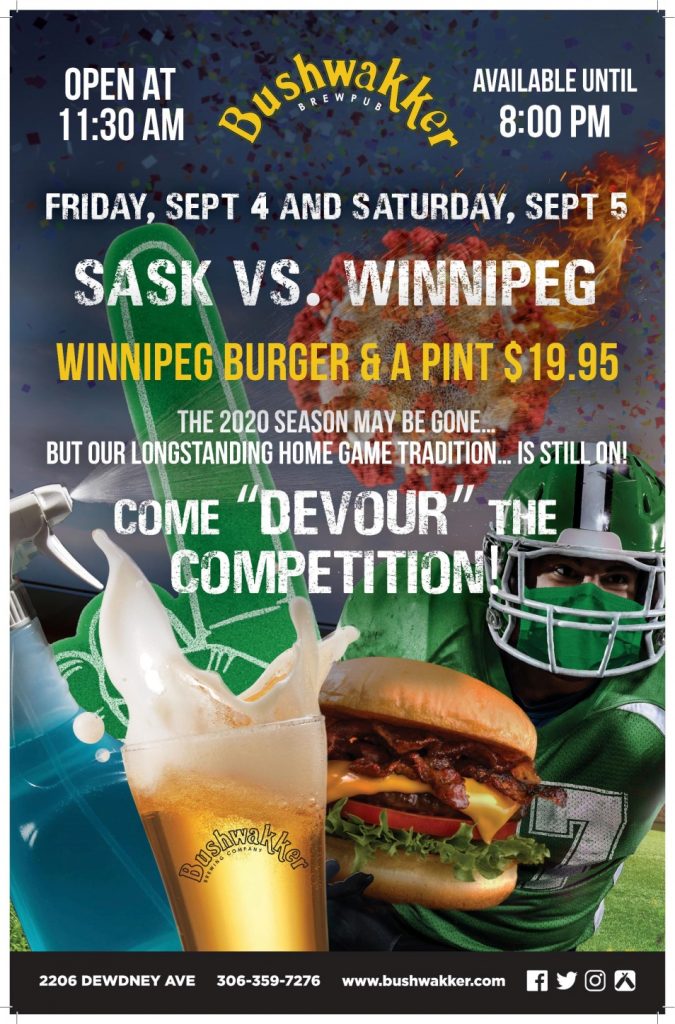 Although the Labour Day weekend will not be same, we will continue to follow the original 2020 Home Game schedule and offer a gourmet burger in honour of the scheduled visiting team. Enjoy our decadent WINNIPEG BURGER & A PINT SPECIAL on Sept. 4th and 5th for only $19.95! 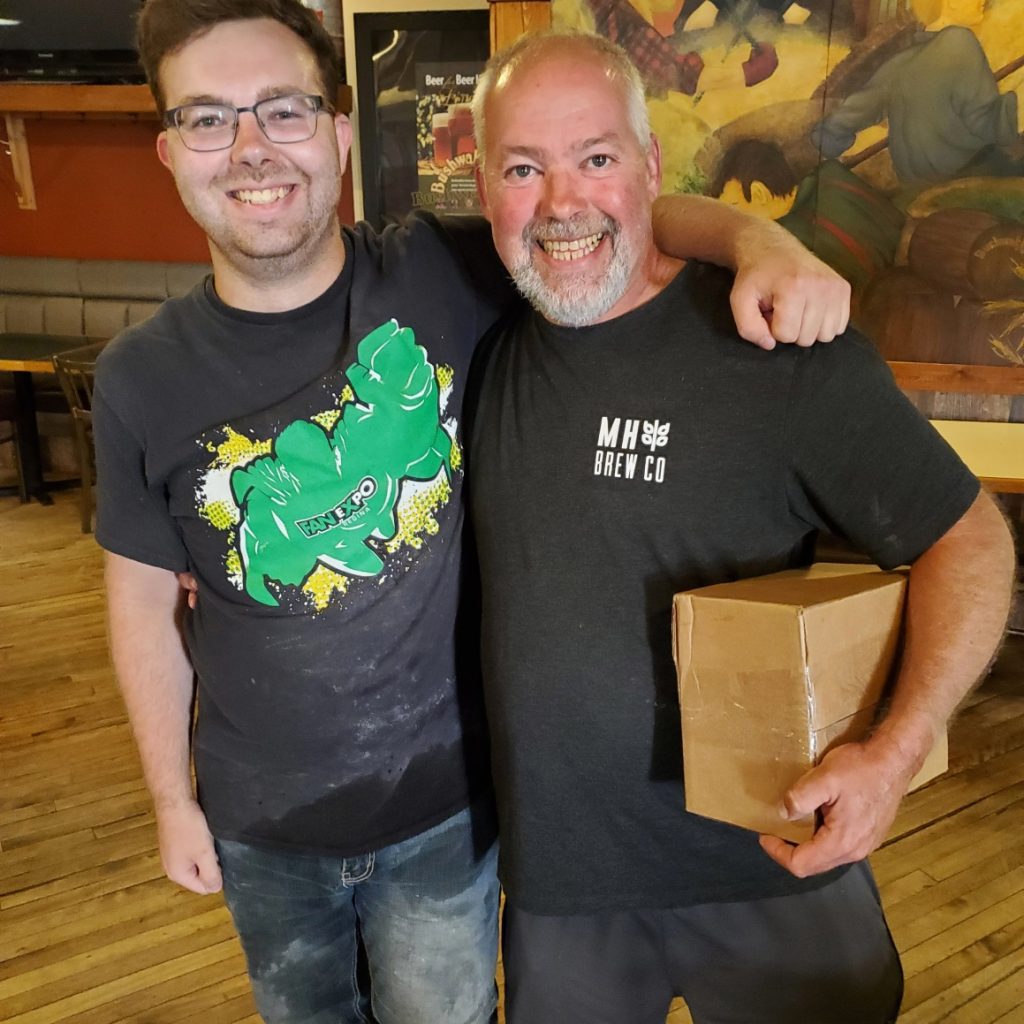 Former Bushwakker head brewer, Mitch Dalrymple, stopped in last week to check in on his son Bradley. Bradley is the current Bushwakker assistant brewer and Mitch is now the head brewer at The Medicine Hat Brewing Company. 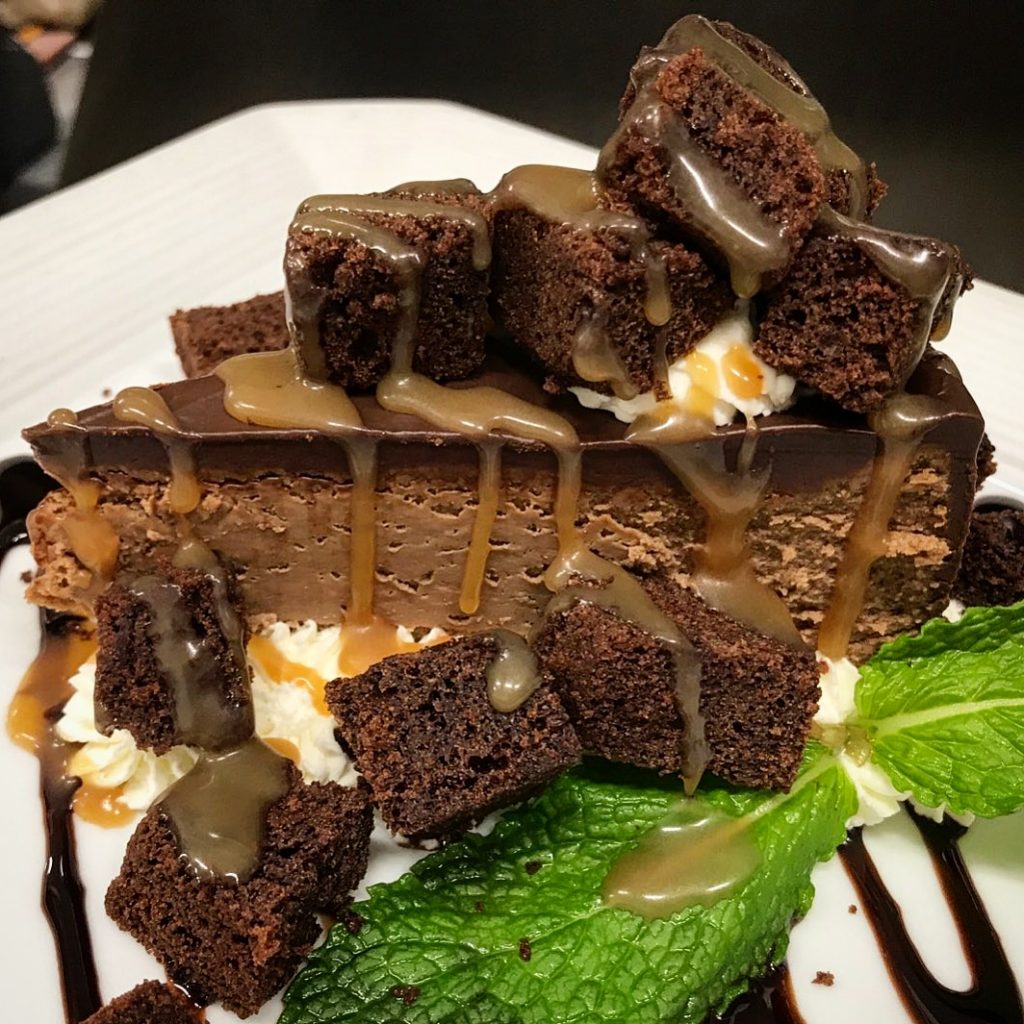 Our fastest selling cheesecake of all time was last week’s CHOCOLATE CARAMEL BROWNIE CHEESECAKE. It was all gone in less than an hour. Speedy comfort food indeed! 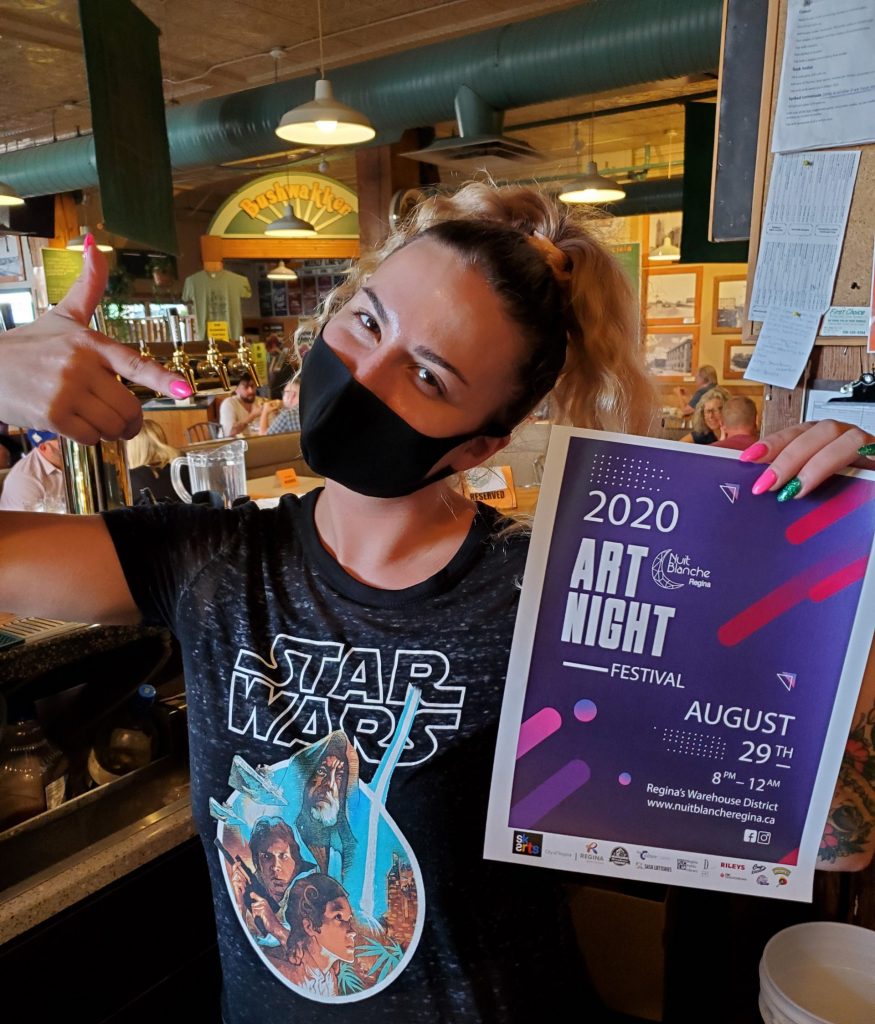 The 2020 ART NIGHT starts off outside The Bushwakker this Saturday at 8:00 PM! Bushwakker bartender, Shayla Cake (DJ Cakebaby), will be the event DJ. This is a free night time arts festival showcasing eight art installations placed throughout the Warehouse District. Bring your vehicle, follow the glowing bike and view some amazing night time art! Learn more at www.nuitblancheregina.ca

Much Ado About Seltzer

The last time I wrote about seltzers, I stated that they were here to stay, but I’m not sure that anyone would have predicted what has happened in the ten months since I wrote that analysis. Simply put, seltzers have skyrocketed, and while some of the boost seen in scans is simply the result of larger pandemic forces shifting volume into the off-premise, the trajectory behind seltzer’s rise suggests that a lot more is going on. 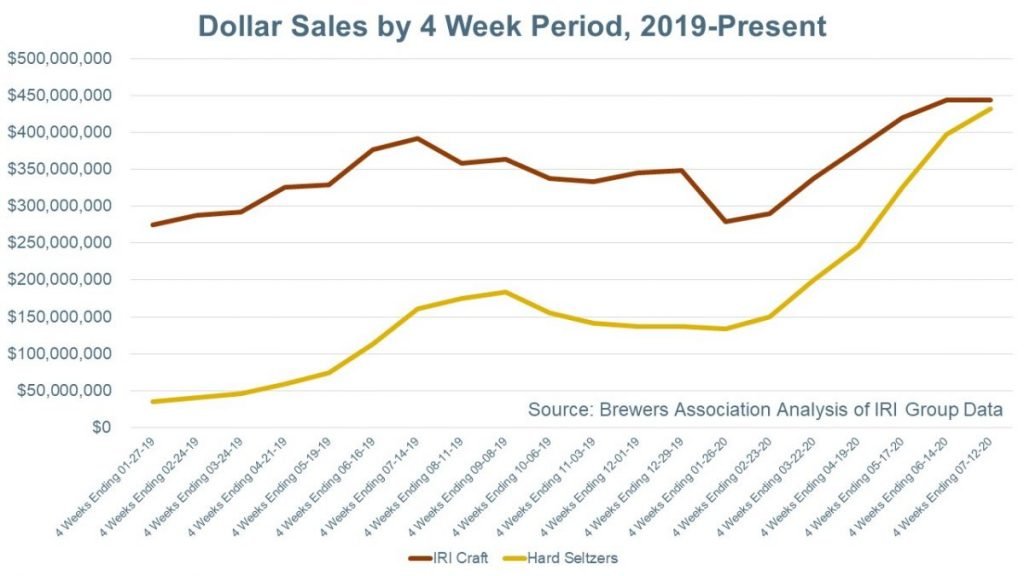 It doesn’t take a superforecaster to see that those lines are going to cross pretty soon. This isn’t meant to be a shot at craft’s performance, which has looked better than many segments of the beer industry in recent months. Unlike premium and value lagers, craft is holding share even as seltzer rises. And, craft’s numbers would certainly look better with a more complete picture – though the on-premise bump is obviously much smaller these days. Anyway, the point is that seltzer has emerged almost overnight into a huge category that may not have caught up with craft’s sales levels just yet, but is on its way.

I should note that there have been recent signs of a “slowdown” in seltzer growth. I put “slowdown” in quotes since a category that grew 140% year-over-year in the latest four week period isn’t exactly a sloth, but it does represent the slowest year-over-year (YoY) growth in the past year and a half. Some of this slowdown is certainly attributable to out-of-stocks. The most recent low point occurred in late July/early August last year as well. My sense is it’s a combination of that, bigger numbers to cycle during summer months, and the law of large numbers kicking in. If seltzer grew at 350% year-over-year for two more years it would be the majority of beer dollar sales. It might grow a lot more, but that stretches beyond even the optimist’s imagination on that timeline. 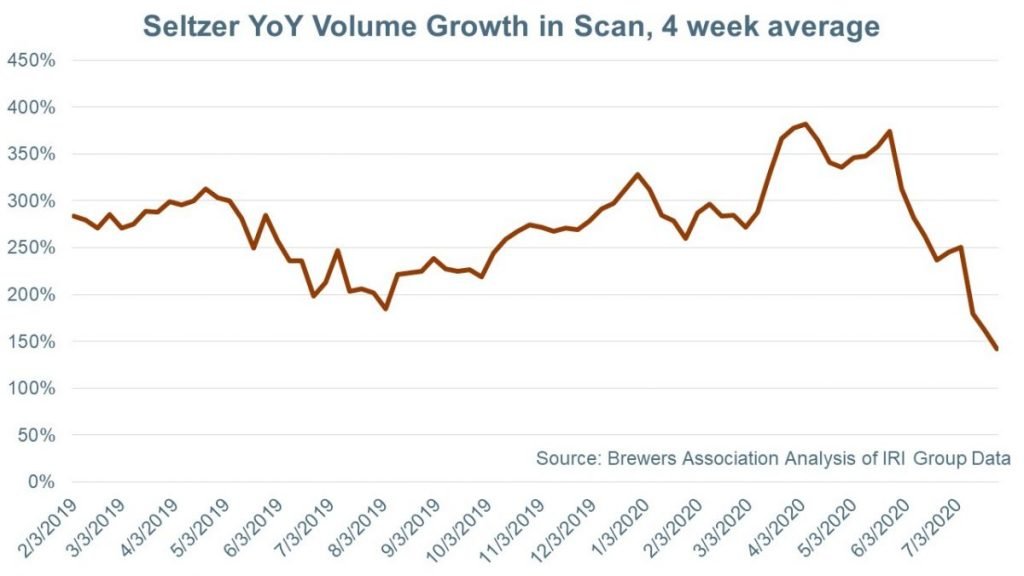 Alright, having set the stage – humongous growth, possibly slowing – I want to use the rest of this post to look at the overlap between craft and seltzer and provide some additional context and data for any craft brewers thinking about the seltzer market.

The Overlap Between Craft and Seltzer

Let’s start by looking at who seltzer drinkers are and their overlap with craft drinkers. My big upfront caveat is that the best way I have to look at this is through our annual Nielsen survey data. There are two problems with using this data:

But, are they drinking seltzer instead of craft? We know from previous years that craft drinkers drink lots of categories within beverage alcohol, so it’s entirely possible that they are drinking more seltzer and simply less of domestic lager/light lager/wine/spirits. As one data point (or a quote that I’m sure is backed by a lot of data points), Gavin Hattersley was recently quoted in Beer Business Daily as saying “the majority” of seltzer volume is “coming from outside of beer.”

I don’t have great data to definitively prove this one way or the other, but within beer the category market share numbers suggest that seltzer is eating into mainstream lagers more than craft. In IRI data, craft is basically static year-over-year in share. In contrast, imports have lost 0.7 share points, domestic sub-premium has lost 1.9 share points, and domestic premium has lost 3.4 share points (13 weeks ending July 26, 2020, MULO+C, Total U.S. versus the same time period a year ago). That’s not definitive proof that seltzer isn’t sourcing from craft (it could be and craft could be growing elsewhere to offset), but it’s decent evidence that the outflow from craft isn’t as large as it is from other parts of the beer business. Side note: chain store operators… when you’re allocating shelf sets to add more seltzers this fall and next spring, feel free to consult the share numbers above to see what should lose space.

Seltzer Drinkers Care about Local and Independent Too

Even if seltzer isn’t sourcing volume directly from craft, there is some growing evidence that seltzer drinkers – or at least those that also drink craft – care about many of the same attributes as craft beer drinkers. For example, our survey shows lots of evidence that things like “local” and “independent” are just as important to the craft drinkers that drink seltzer as those that don’t. In fact, I’d go further, and say that craft drinkers who drink seltzer care more about local and independence than those that don’t.

We can also flip this around and find that of those who think local is important in the data set, 36% are weekly seltzer drinkers. Of those who don’t think local is important, only 23% are weekly seltzer drinkers. So more evidence that preference for local correlates with the likelihood that a craft drinker also drinks seltzer.

After all of that, does that mean that you can use local as a differentiator within the seltzer market? That I have less data on (again, our “local” questions were specifically about beer), but my gut is that the same cues are going to work for many of those customers.

Finally, because this is survey data, we can overlap it with demographics. Here’s the average age for the interaction of seltzer drinking and the importance of local. To me, this zeros in on the sweet spot where consumers are both likely to drink seltzer, and might care if it’s made by their local brewer rather than opting for the brands that have dominated the space in recent ySo basically, the local/seltzer drinking sweet spot is mid to late 30s. If that’s your brewery’s consumer demographics, a local seltzer might be a hit. If your demographics are older than that, your customers might care about local, but probably don’t drink much seltzer. If you have a bunch of college students coming into your taproom, they might drink a lot of seltzer, but local probably isn’t a primary attribute they care about (at least yet). Now you might argue back that the mid to late 30s also shows up in the opposite (people who don’t drink seltzer and don’t find local important), but I have a graph for that…

Here’s a graph of two groups. Those who drink seltzer the most (multiple times a week) AND care about local (somewhat or very important), and those who drink seltzer the least (less than once a month) AND don’t care about local (not that important or not at all important). The first group is heavily concentrated in their 30s. 48% are 31-40. The other group is pretty evenly distributed across ages, with only 19% from 31-40. The craziest thing about this finding is that the average age of the groups is basically the same (38 vs 41), it’s just a totally different distribution. This has been your latest episode of “How Averages Lie.” 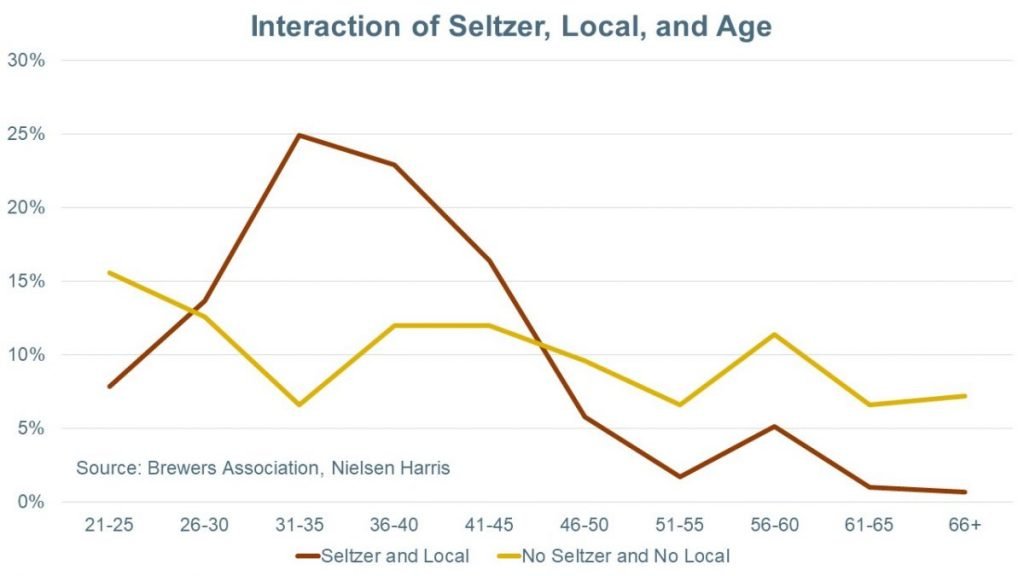 But Isn’t Seltzer Dominated by Big Brands, You Ask

I’m guessing that some of you are probably thinking of the counter to everything in the last few paragraphs, which is something like, “yeah, well just because people care about local beer doesn’t mean they care about local seltzer and this is a big brand dominated business.” At one level, that argument is correct. Here’s the share of seltzer dominated by the largest brands or other brands owned by the largest brewers (so White Claw, Truly, Bud Light Seltzer, Corona Seltzer, Vizzy, and other brands owned by the large brewers) since the start of 2019. 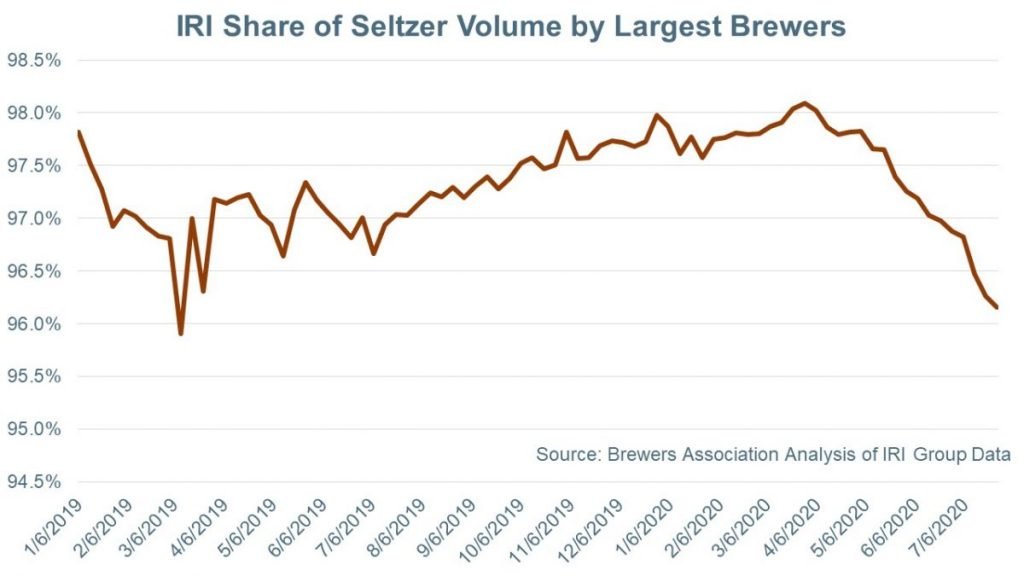 It’s dropped (from its peak) but it’s never really dipped below 96% share for the large players. I myself was saying similar things about seltzer being a big brand dominated category a few months ago. That said, a few things have changed over the past 6-12 months that make me think that debate is reopening:

Still not convinced? Then don’t make a seltzer.

If you’re still with me after nearly 2,000 words about hard seltzer, here’s a summary:

In closing, I’ll point back to my article from last year, which included a section on “should I make a seltzer?” I think those questions about how a seltzer might fit with your brewery and brand are still relevant, and so I’ll close with the same words: Brewers that build new brands that align with their existing identity are probably going to have more success in the long-run than those that completely shift gears just to chase growth.

A busy farmer needed some help with tending to the animals. His mother-in-law offered to spend some time on his farm, and being as busy as he was, the farmer had no choice but to accept her offer.

A few days later, the farmer’s mother-in-law was killed when his mule kicked her.

Thousands of people from town who had heard about the death came to the poor lady’s funeral, many that the farmer didn’t even know. A minister noticed this, came up to the farmer, and asked him, “Why are there so many people here?”

The farmer answered, “Oh, they’re not here for the funeral. They want to buy the mule.”