This weekend’s SPECIAL DINING FEATURE on August 21st and 22nd is a Edmonton Burger & a Pint for 19.95. Our Saturday CLASSIC STEAK & A PINT SPECIAL for $21.95 will also be available. 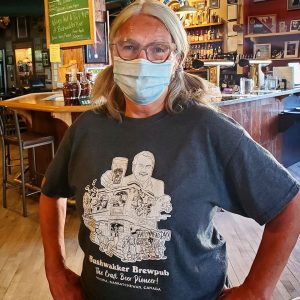 Congratulations to Bushwakker Floor Manager, Cheryl Tovey, on being voted BEST PUB SERVER in the 2020 “Best of Food Regina” Awards conducted by the Prairie Dog Magazine. This is her 11th win in this category. 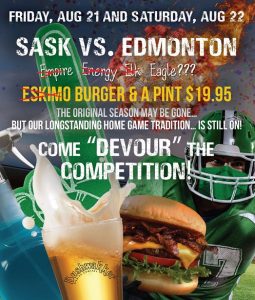 We continue our tradition of following the original 2020 Home Game schedule and offering a gourmet burger in honour of the scheduled visiting team. Enjoy our Edmonton Eskimo/Empire/Energy/Elk/Eagle? Burger & a Pint Special this weekend for only $19.95! 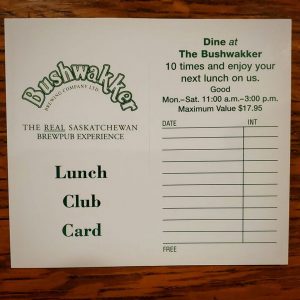 We were quite excited to be voted Best Lunch Restaurant in the 2020 Best of Food Regina Awards. Be sure to get your Bushwakker Lunch Club Card so you can enjoy your 10th lunch on us! 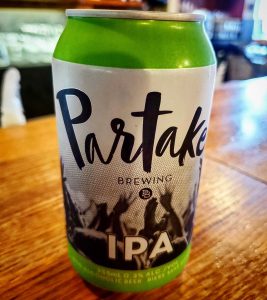 We had a feeling a non-al IPA which actually has a nice amount of hop aroma and bitterness would resonate with a number of Bushwakker customers. And only 10 calories per 355ml can. We are having difficulty keeping this one in stock!

The first half of 2020 has been like no other, both for the world at large, and at a much smaller level, for the craft brewing community.

The Brewers Association (BA) has been measuring those differences at various points since mid-March, but now that we’re halfway through the year, we’d love to get a more comprehensive view via our midyear survey.

Here’s a short recap of the data we’ve gathered so far, interspersed with some other data sets.

The first two months of the year looked to be roughly on pace with 2019. Scan data showed BA craft roughly flat, perhaps a bit weaker than the same period in 2019, though January and February are typically the two slowest selling months of the year. At the same time, at-the-brewery sales, from brewery growth statistics and Google Search data, suggested another year of growth was in order.

Every data set I have seen shows this changing during the week ending March 8, which, looking back, was a transition week to very different numbers the weeks of March 15 and 22. Here are a few data points:

These various data channels show different levels of change and in different directions, but all show that starting the week of March 8, and then rapidly accelerating the weeks of March 15 and 22, U.S. consumers changed, and the economy with them.

The BA conducted our first impact survey during the second of those two weeks. Breweries were already seeing the effects and anticipating a large impact, with a majority having slowed or stopped production, and expecting layoffs.

The next period, the depths of the economic slowdown, lasted from around mid-March through mid-April, with some weak signs of improvement through early to mid-May. From March 18 through April 21, BA craft boomed in scan, searches for “brewery near me” cratered (26% of the year before average, or a decline of 84% against what had been a rise of almost +40%), total consumer spending on accommodations and food services via credit card data stayed down more than 60%, and in person restaurant traffic was virtually non-existent (average reservation decline of greater than 99%). It was during the middle of this period that the BA conducted our second impact survey, and it captured the economic devastation and general negative sentiment that existed in many parts of the economy. The survey very accurately captured the larger economic numbers, with off-premise packaged beer up, distributed draught virtually non-existent, and at-the-brewery sales somewhere in between, with a bit of to-go keeping the numbers slightly less negative than for sit down restaurants.

From there, some consumers adjusted and started feeling more comfortable reentering the world, bringing a slow return to sales, with high levels of variation by place and demographics. This return largely took place the second half of May and throughout June, depending on what part of the economy you are looking at and where. Data from BeerBoard showed only 16% of locations open and pouring beer May 8-10, a number that had risen to 84% by June 19-21.

Throughout this rise, however, there have been steady signs that all is not returning to normal. Nielsen CGA’s survey of on-premise consumers from June 19-21 found that only 36% have been out to eat in the past two weeks, with only 11% having gone for a drinking occasion. Pre-COVID, the dining number was 82% at least once in two weeks. At the same time, the off-premise has remained elevated even as the on-premise has reopened, with BA craft sales up 16.7% by volume for the four weeks ending June 21 (Source: IRI Group, MULO+C, Total U.S.).

Our third survey, conducted at the end of May, perhaps captured the mixed messages of this tepid recovery. Breweries were on average a bit more optimistic, but with large variations. The reasons for optimism and pessimism also varied widely, suggesting a range of local and individual business outcomes.

Entering a New Phase for the Back Half of 2020

In the last weeks, as cases have once again spiked, but in new places and with different demographics, it feels that we are perhaps entering a fourth phase. What direction this phase will push economic activity remains to be seen. As with previous stages, this isn’t just an economic question. I’ve heard economists describe this downturn as a “supply-led” recession, but it’s not really in the way we typically think about supply. The idea that restaurants can’t supply you with a meal without health risks isn’t the same notion of supply you learn in Econ 101. The economic question is tied up tightly with public health, consumer psychology, not to mention government fiscal and monetary policy.

To truly recover, we need to solve (or at least contain) the public health issues, restore consumer confidence in reentering social life, not to mention repair the gaps in demand resulting from laid off workers and shuttered businesses. Solving all three of these pieces seems unlikely in the short term.

More likely is that we are entering a period of turbulent economic activity, with reduced spending levels that vary significantly place-to-place, and shifts in spending that will persist for some time. The IGM Forum and FiveThirtyEight describe the shape of this economic outlook as a “reverse radical.”

To close – the Brewers Association will continue tracking small brewer performance to better tell your story and advocate on your behalf. It’s become clear to nearly everyone that COVID is going to have an impact for months, if not years to come, and we’re committed to doing our best to help small brewers understand the changes in the economy, consumer behavior, and our industry as these challenging times unfold.

Do you know that when a woman wears a leather dress, a man’s heart beats quicker, his throat gets dry, he gets weak at the knees, and he begins to think irrationally???

It’s because she smells like a new golf bag. 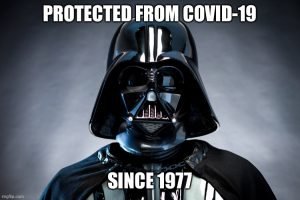