This weekend’s Special Dining Feature is a BC BURGER & A PINT for $19.95. Our Saturday CLASSIC STEAK & A PINT SPECIAL for $21.95 will also be available. 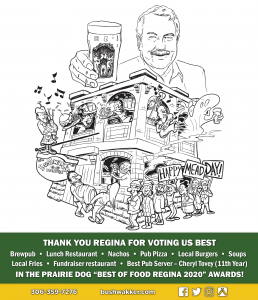 Much thanks to Regina’s Prairie Dog Magazine as well as our many loyal fans for voting us Best Brewpub in Regina in their 2020 edition of the “Best of Food Regina” annual reader’s poll. Special congratulations to Bushwakker floor manager, Cheryl Tovey, for extending her winning streak to an 11th year! See all of the Queen City winners at https://prairiedogmag.com/ 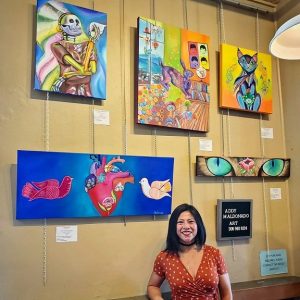 The BUSHWAKKER LOCAL ARTIST WALL for the month of August features the works of ADDY MALDONADO. Addy is a self- taught visual artist born and raised in Orizaba, Veracruz Mexico. Addy spent most of her childhood living with her grandparents in a small town in Mexico. Addy moved to Regina, SK in 2012. Addy’s love for her country, culture and roots inspired her to create her first projects here in Regina. She defines her paintings as Mexican Folk Art (Art from the heart); the art of ordinary folk to express a cultural identity.  Addy loves to paint Mexican cultural icons (Catrinas, El Corazon, Piñatas to name a few). Her love for pets and nature is also represented in her paintings. She often uses vibrant colors to always keep her Mexican style. Enjoy her vibrant and colourful works all this month! 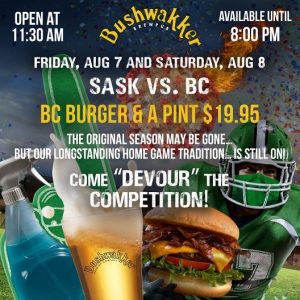 We continue our tradition of following the original 2020 Home Game schedule and offering a gourmet burger in honour of the scheduled visiting team. Chef Mike loves his BC Lions!

The Geography and Demographics of Small Brewers, Part 2

In part one of this series, I explored the demographics of craft beer drinkers and how those have changed in recent years.  It showed some sharp differences by age, income, and race/ethnicity, even when controlling for factors like income. This second post explores how those demographics might be shaped by where are breweries located.

The base for this analysis is a compilation of each of the almost 73,000 census tracts in the country and a count of how many breweries are in each. The data comes from the U.S. Census Bureau’s API. If you want to replicate my data pull, I’m happy to send you the R code I used.

Let’s start again by looking at income. Based on the indices of craft consumption by income brackets in my last post, you might expect that craft brewers would be more likely to be located in higher income neighborhoods. Well, that’s not the case. The highest breweries per capita occur in relatively low income neighborhoods. Note: in doing this in per capita terms, you exaggerate this effect, but these neighborhoods also have the highest number of breweries per tract if you cut it that way. There are 2,803 census tracts with a median household income of $10,000-25,000 (3.9% of the tracts that have an income estimate) and they have 5.8% of the breweries in the country. This gets even more exaggerated in per capita terms, since these areas only have 2.8% of the U.S. population. Putting those data points together, you may quickly figure that these are relatively low population neighborhoods, suggesting to me things like industrial and warehouse districts with relatively low residential populations.

In one sense, that’s in line with national demographics: the median household income of census tracts in this data set was $57,097, and the median for a tract with a brewery was $57,432 (it’s a bit above it now, but this data set covers 2014-2018). However, as we just saw, craft drinkers skew much higher than the total U.S. In 2017, the median household income of a craft drinker was closer to $90,000 (it was $85,052 in 2015). So breweries are located in neighborhoods that generally have incomes that are lower than the customer base of most breweries. I don’t have the geospatial chops to analyze the income of wider areas around those tracts, but my guess is that you’d find a lot of breweries in census tracts that border those with incomes that align more with craft customers.

To sum, there is a clear gap between the income of neighborhoods where breweries are located and the income of their typical customers. This may be a completely logical business decision, as neighborhoods with lower median income may be located relatively close to higher income neighborhoods and offer lower rent or better zoning opportunities. Many breweries require space that is zoned for manufacturing, so locating in residential neighborhoods may not be an option.

Want to learn more about this and the relationship between brewery location and gentrification?

I start with that to say that in total population and size, on aggregate, brewery tracts and non-brewery tracts are not clearly different, and so at the broadest possible level, clear confounds do not exist (it is almost certain that more would emerge with a deeper analysis). When we move to the race/ethnicity composition of tracts with a brewery versus those without, we begin to see clearer differences.

In short, the neighborhoods with a brewery are in general more white than those without a brewery. As I mentioned in the outset, it is very hard to draw causality from these kinds of numbers. Are breweries locating in neighborhoods that look like what they think their core demographic will be? Is their location choice shaping those demographics? Is this more related to customer income and costs than it is race or ethnicity? The answer is probably a bit of all of these and that those effects feed on each other.

First let’s look at the “Brewery Districts,” which is what I’m calling the 66 neighborhoods with the highest density of breweries. Interestingly, their racial/ethnic makeup is very similar to the total U.S. population. Again, I don’t want to push causality too much – it’s not clear whether the makeup of those neighborhoods contributes to the brewery density or if there are other characteristics (cost/urban centers, etc.) that lead to them being ideal brewery locations.

These locations look pretty much like where all U.S. breweries are located. So in general, most breweries are going into places that already match up with the typical brewery location. A note on this: these aren’t just the same neighborhoods. I didn’t include closed breweries in this analysis, but of the 1,841 neighborhoods where the most recent 2,000 breweries are located, only 520 (28%) have another brewery in them. So the vast majority of new breweries (72%) had 60,000+ neighborhoods to choose from (functionally less with zoning, etc.) but still picked neighborhoods with demographic patterns that look pretty much like what earlier breweries were doing. For me, this is a contributing factor in why the customer demographics we saw in part one of this analysis haven’t moved that much. For breweries to grow their demographic, they have to start doing new things – and while many individual breweries are, at least based on location relative to demographics, collectively new breweries are making basically the same geographic choices as the 6,000+ breweries that came before them.

Age will be the simplest analysis. Neighborhoods with breweries have very similar age distributions to the total U.S., to districts without breweries, and to the most recent 2,000 brewery locations. The only part of the analysis I did that differs significantly is for the “Brewery District” neighborhoods with 5 or more breweries. Those skew much younger than the U.S. population, again suggesting central urban neighborhoods. Across the total U.S., 21-44 equals about 44% of the 21+ population and 45+ equals about 56%. In the brewery districts, those percentages are more than flipped, with 58% from 21-44 and only 42% age 45+.

The data in this two-part series is meant to provide some benchmarks and describe aggregated information about the customers, locations, and immediate neighborhoods of breweries as a whole. As always, mileage may vary, and the central tendency of mean and median presented here should not be confused with the range of values.

The goal in writing is not to criticize the choices that hard-working and risk-seeking entrepreneurs have made for their businesses, but rather to provide some broader context about the patterns in which those decisions have previously been made, and perhaps to suggest some of the opportunities that might exist to make them differently going forward.

A 75 year old man went to his doctor’s office to get a sperm count.

The doctor gave the man a jar and said, “Take this jar home and bring back a semen sample tomorrow.

The next day the 75 year old man reappeared at the doctor’s office and gave him the jar, which was as clean and empty as on the previous day.

The doctor was shocked! “You asked your neighbor?”

The old man replied, “Yep, but no matter what we tried, we still couldn’t get that damned jar open.” 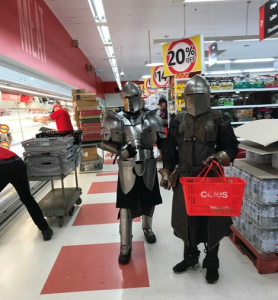