As we complete almost three weeks of service under the Phase Three guidelines in the Re-Open Saskatchewan Economic Plan, we are pleased to report that we are seeing a slow but steady increase in business. Many of our longtime customers are returning and we are seeing them on a regular basis. We are happy that many of our older Bushwakker enthusiasts are back and despite being in a higher risk category, they are telling us that they appreciate our enhanced cleaning protocols and feel very safe and comfortable. We have been able to resume our weekly specials and Chef Mike is reporting that he cannot restrain his creativity much longer and hopes to re-introduce more his amazing, fresh and delicious food specials soon. This Friday and Saturday you can enjoy his PICKEREL CHEEK PASTA as well as his WILD MUSHROOM PIZZA. We got a glimpse into such creativity with his decadent Kissel Burger & a Pint Special he released last weekend when his opportunity to create an Alouette Burger & a Pint Special was extinguished. We are pleased to announce the HOME RIDER GAME BURGER BURGER & A PINT SPECIALS will continue according to the original 2020 CFL schedule even though the entire season may be cancelled. Our next gourmet burger offering will be our BC Burger & a Pint on Saturday, July 4th. Did you know Chef Mike is a big Lions fan? Hang in there with us folks, things are getting better with each passing day and we are delighted to be making this journey with you!

Monday Night Jazz & Blues. Live music is not permitted at this time.

Wednesday Night Folk. Live music is not permitted at this time.

Super Import Beer Night – one of Regina’s largest selections of special order imported beers and ciders are all on sale.

Our new hours of operation are Monday to Saturday from 11:30 AM until 9:00 PM. Our kitchen closes at 8:00 PM. We are closed on Sundays. Our takeout food and beer services will continue to be made available.

Please continue to practice safe social distancing practices. Phase Four started on June 22nd! Remain connected to one another and to us! In addition to this weekly newsletter, we are very active on Facebook, Twitter and Instagram. Check-in with us often as we navigate this new chapter together. Try to support local businesses whenever possible. Be vigilant in your resolve to protect yourselves which in turn will protect others. Please don’t let your guard DOWN so the province can continue to open UP! 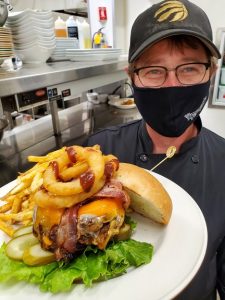 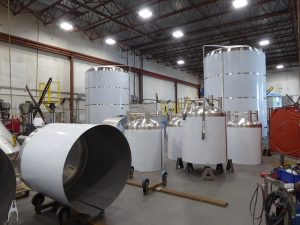 Before the pandemic hit, we were preparing for the installation of a number of new tanks from Konig Brewing Systems in our aging cellar. We are pleased to report that the tank construction is now underway and will soon be filled with fresh Bushwakker beer.

Our June Premium Wine Features are from the INVISIBULL WINERY in British Columbia. The red is a Malbec and the white is their Sauvignon Blanc. Both are $7.95 for a glass and $21.95 for a half litre.

Our GUEST TAP is currently pouring an IRISH STOUT from the O’Hara’s Brewery in Ireland. Next up is the SUMAC HAZY PALE ALE from Saskatoon’s High Key Brewing. 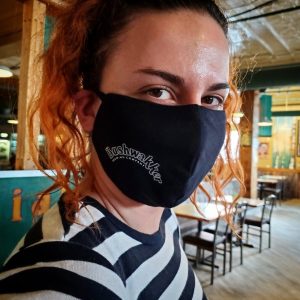 We never thought that one day we would include Bushwakker Face Masks as part of our apparel line-up. That day has come! You too can look hip and stylish in the new normal with a soft and comfy fabric mask. Only $10 each. 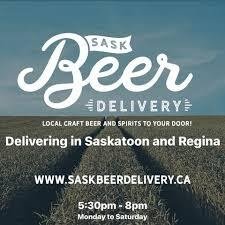 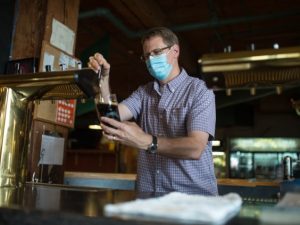 Grant Frew, who is the bar manager at Bushwakker Brew Pub, pulls a pint at the bar on Dewdney Avenue in Regina, Saskatchewan on June 17, 2020.

Unlike other bars, Regina’s Bushwakker Brew Pub has no TV screens.

“We really try to encourage people to come together and talk face to face like human beings,” said Grant Frew, Bushwakker’s bar manager.

Customers are once again interacting at Bushwakkers, but they’re a lot more spread out. As part of current regulations, restaurants and bars can only fill their venues to 50-per-cent capacity and must maintain two metres of physical distancing between dining parties.

Frew said business started off slow when the pub reopened on June 8, but steadily picked up once the weekend rolled around.

In Saskatoon, Amigos Cantina manager Jim Clarke said that while takeout orders have continued to be steady, the number of people dining in has been “mediocre.”

“There’s a lot of people that are not interested in sitting in a restaurant, I feel,” said Clarke.

Jim Bence, president and CEO of the Saskatchewan Hotel & Hospitality Association (SHHA), said those national numbers are lining up with what he’s been hearing from restaurant owners in the province.

A big sticking point for restaurants and bars has been the 50-per-cent capacity rule. Bence said right off the top, that means revenue is cut in half, while other costs such as taxes, rent and labour remain the same.

Clarke said he understands the safety reasoning behind the regulation, but it still stings financially.

“It’s a hard nut to crack. We weren’t making money hand over fist when we could be operating at 100 per cent,” said Clarke.

Operating at 50-per-cent capacity also isn’t so straightforward. For both Bushwakker and Amigos, ensuring the proper social distancing requires both to operate at actually below 50 per cent. Frew agreed it puts Bushwakker in a tough spot.

“Long-term it’s not financially feasible, but for now it will help keep us afloat,” said Frew.

Not every restaurant has resumed dine-in operations yet. Andy Yuen, owner of Odd Couple Restaurant in Saskatoon, is taking extra time to familiarize staff with the guidelines of the reopening plan. Yeun also said some staff members are in their 60s, so he wants to be extra careful.

“We also want to take the time to wait for a few weeks just to see if the COVID cases would be stable after the initial Phase 3 reopening,” said Yuen.

Vicki Leas, who owns Welsh Kitchen in Weyburn, said she’s considered the possibility of closing her dining room and switching entirely to takeout because social distancing and cleaning procedures have made it harder to process transactions quickly. In order to compete with the prices of chain restaurants, Welsh Kitchen needs a high volume of orders. To help facilitate takeout orders, the restaurant recently installed a takeout window.

“We also bake so we’re doing a lot more Facebook orders and takeout orders and that kind of thing and that’s going to help us, but it’s a tough place to be in right now,” said Leas.

Leas’ restaurant also does catering, which has dried up with the forbidding of large public gatherings. When the province announced its COVID-19 public health order, Leas had 15 weddings cancel their orders in one day.

Unlike restaurants, hotels were able to stay open during the lockdown. However, Bence described the industry as currently doing “very poorly.”

Because hotels were an allowable service during the public health order, they did not quality for the province’s Small Business Emergency Payment Program.

Bence said the SHHA has also been lobbying against the provincial government’s decision to split Phase 4 of the reopening plan into two parts. Part two includes indoor pools, which Bence said would be helpful for hotels looking to open up their waterslides in an attempt to cater to leisure travellers.

Bence expressed disappointment with the pace at which Saskatchewan’s economy is being reopened, and referred to it as “glacial.” He said decisions are being driven by chief medical health officers, who are more concerned with the public safety aspect than trying to balance the needs of the economy. Bence said a case can be made for the reopening to happen quicker given how the province has done with its number of COVID-19 cases.

“I think we’re doing really well. I think it’s time to reward the business community by saying, ‘Hey look, we can move this along faster, but in a safe way.’ It’s going to be all about social distancing for sure, but also tracking. So, let’s just move it along,” said Bence.

Clarke said he would like to see more support for restaurants, especially establishments that also relied on revenue from hosting musical performances.

“I think there has been a bit of a movement towards supporting local, which is very positive but again, if we’re not supporting local and probably through the government, we’re gonna end up with nothing but chain restaurants and no entertainment,” said Clarke. 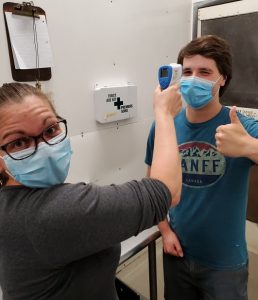 Part of our enhanced safety protocol is conducting temperature checks before every member of our staff begins their shift. Supervisor Kristy was not surprised that bartender Sean is consistently as cool as a cucumber!

TIME OUT – Bear in the Woods

Two men were walking in the woods one day, and they all of a sudden came across a bear. The bear noticed them, and started growling and generally getting really mean.

The bear started to chase one of the guys, who, as it turns out was from Czechoslovakia. The bear soon caught up with him and ate him alive. The other guy turned around and ran for his life.

A little while later, the second guy found a park ranger station and told his story. The ranger took his gun and they both went out in search of the bear in order to destroy it.

Soon they came across two bears, one male, and one female. The ranger turned to the man and said: “Quick… tell me which bear ate your friend!” The ranger leveled his gun and got ready to shoot.

“I’m not really sure,” said the man, “they both look similar.”

“QUICK! Make up your mind!” said the ranger.

The ranger promptly aimed and shot the female bear. The male ran off. Using his knife, the ranger cut open the belly of the female and found the body of the other man.

“But why didn’t you shoot the male when I thought it was the male who ate my friend?” the other man asked.

“I never trust anyone who says that the Czech’s in the male!” 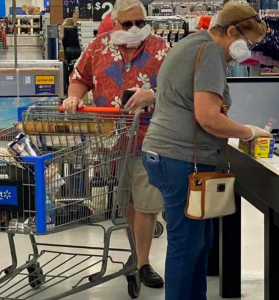 Um… those aren’t supposed to be used there, but that’s pretty resourceful.