We extend our condolences to the family and friends of former Bushwakker head brewer, Brant Ross, who passed away in late February. Brant was the Bushwakker’s first assistant brewer working with then head brewer, Scott Robertson, in the early 1990’s. When Scott left to brew in Japan and then Singapore, Brant became our head brewer for many years before moving to Brewsters Brewpub to take over their brewery operations.

Brant was a unique individual with a unique sense of humour. He loved good beer, good food, good cigars and good spirits. He enjoyed cooking at home and also dabbled in home distillation. He was very concerned about safety in the brewery and would often recite poems to help remind his brewery staff be aware of their surroundings. His most frequently recited poem was, “Sticks and stones will break my bones but temperature and pressure will kill me.” 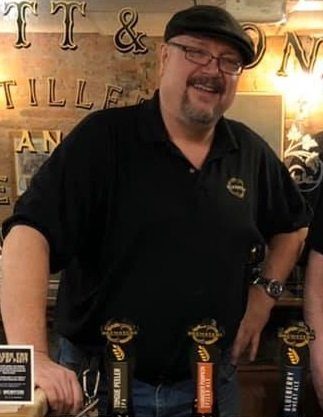 It’s with a heavy heart we’re sad to announce the passing of a great friend, colleague and bigger than life personality, Brant Ross.

Brant started with Brewsters almost 18 years ago and was a Master of his craft, brewing exceptional beers and gaining a huge following in the #YQR community and beyond. Words can’t express how shocked we all are hearing this unfortunate news. Brant was an amazing person always willing to lend a hand to those around him.

From everyone at Brewsters we send our love and prayers to his family and friends. We’ll be hosting a celebration of life for Brant in the coming weeks and hope to see many of those he touched over the years. The BrewCrew won’t be the same without you BR. You will forever be missed.

Our March Premium Wine Features are from the PONDVIEW ESTATE WINERY in Niagara-on-the-Lake, Ontario. The red is a Cabernet Sauvignon/Merlot and the white is their Dragonfly Pinot Grigio. Both are $8.50 for a glass and $23.95 for a half litre. 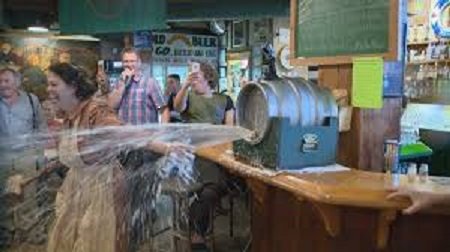 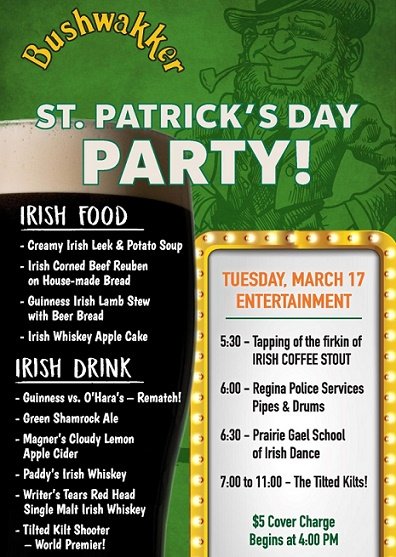 Mar. 18: Wednesday Folk Night. HOLLY POP with Brad Papp. Young singer/songwriter in her first Bushwakker headlining performance. Dear old dad will have his work cut out for him tonight! 8:00 PM.

Mar. 19: HEALTH SCIENCE PUB – “Taming the Queue, or What’s Up With Wait-lists?” Our wildly popular Science Pub Series has returned for an eighth incredible season! Enjoy lectures on scientific topics of general interest in our Arizona Room over fine craft beer and award-winning pub cuisine. The room opens at 5:00 PM. Avoid disappointment and come down early for dinner and a pint before the presentation which begins at 7:00 PM. This month’s lecture will be presented by Dr. Tom McIntosh, Professor, Politics and International Studies at the University of Regina.

The Buzzing Science Behind Cannabis Beer

By: The Beer Connoisseur

Among the existing cannabis-based products, it is becoming difficult to surprise consumers with new and interesting concepts. Still, one product managed to make the 420 society light up. Of course, we are talking about cannabis beer, and many breweries around the country released new versions.

Let us explore this product in more detail and see why it is so successful!

Even though the legislation behind the canna-business is getting less restrictive by the year, most current laws forbid mixing THC (tetrahydrocannabinol) and alcohol. That is why those producing beers infused with cannabis or its by-products need to be very careful when it comes to manufacturing.

Also, dispensaries that hold a medical cannabis license cannot sell these beers, while liquor stores cannot sell medicinal cannabis. Such rules make sales tough for both parties. On the other hand, manufacturers are free to make non-alcoholic beers that contain THC.

How Is Cannabis Beer Made?

In 2018, the Farm Bill made industrial hemp (and thus CBD or cannabidiol, the non-psychoactive cannabinoid) legal across the United States. Even though getting a license to produce CBD beer is tough, the bill encouraged many breweries across the country to give it a go. With cannabidiol being as a recognized pain reliever, anxiety reducer and insomnia management substance, the younger population that seems to have started losing interest in beer is catching up to CBD beverages and non-alcoholic cannabis beer.

Cannabis beer is a fantastic blend of ingredients, as hops and cannabis share a fair portion of phylogenetic roots. Due to their somewhat similar taste and smell, they complement each other pretty well, which is most likely to be attributed to terpenes found in both plants.

Most brewers who sell high-quality beers have already perfected their brewing process. Still, those who make cannabis beer often wonder at which point in the process they should add CBD, which is a question of choice.

The brewers looking to produce more beer at a more rapid rate tend to add CBD while the beer is boiling, which is a smart business decision. However, high temperatures often kill the terpenes and the taste they produce. Those who are a bit more experienced and remain focused on the product’s taste and quality choose to add the cannabidiol extract when the mixture cools down a bit and give it some time to soak up the soluble extract.

Infusing beer with dried cannabis requires a bit more work to deliver a clean, high-quality product. However, the final product is certainly something to rave about, as it has the richest aroma and the crispiest taste. Another option that some breweries choose is adding CBD tinctures to the product moments before bottling.

The Anti-Alcoholism Argument: CBD and Alcohol Mix Well Together

One out of eight Americans struggles with an alcohol use disorder. The staggering fact points to a seriously ignored crisis in public health, with alcohol killing nearly twice as many people as heavy opiates every year.

And while alcohol works as a central nervous system depressant, cannabidiol is a stimulant when dosed correctly. A study of a rodent model of alcoholism and the effect of CBD on neurodegeneration shed some light on the topic, possibly encouraging further research efforts.

Namely, rats that have consistently been injected with CBD or that received it transdermally prior to being given alcohol experienced up to 50 percent less detrimental effects of alcohol on the nervous system.

Alcohol is also one of the main causes of hepatic steatosis, otherwise known as the “fatty liver disease.” Even though the symptoms of a disease are reversible, it is a potential root cause of many other issues. The 2014 study by Yang et al. points out that cannabidiol certainly helps in treating alcohol-induced steatosis due to its antioxidant effects.

Even though the trend of cannabis-infused beer production is relatively young, there is a lot to expect from it.

With scientific research related to CBD flourishing more and more every day and a much looser legal status of the cannabis plant, the media will likely skyrocket cannabis beer to yet unseen heights.

Even though the processes of creating these products vary, both cannabis and beer enthusiasts have a lot to rejoice, as breweries will continue perfecting the already great mixture of ale and cannabis.

Mary was having an affair during the day while her husband was at work. One day, she was in bed with her boyfriend Ralph, when she heard her husband’s car pull in the driveway. She yelled at Ralph, “Hurry! Grab your clothes and jump out the window, my husband is home early!”

Mary cried, “If my husband catches us, he will kill us both!”

So, Ralph grabbed his clothes and jumped out the window. When he landed outside he found himself in the middle of a marathon race, so he started running alongside the others, only he was still in the nude, carrying his clothes on his arm.

One of the runners asked him, “Do you always run in the nude?”

Ralph answered, while gasping for air, “Oh yes, it feels so free having the air blow over your skin while you are running.”

Then another runner asked, “Do you always run carrying your clothes on your arm?”

Ralph answered breathlessly, “Oh yes, that way I can get dressed at the end of the run and get in my car to go home.”

Then another runner asked, “Do you always wear a condom when you run?”

Ralph answered, “Only if it’s raining.”