Our new website is up and running! Much thanks to AdSpark Communications for all their help in bringing this big project to fruition. Please visit us at www.bushwakker.com

Our GUEST TAP is currently pouring the YUPPIE IPA MONSTER TRUCKER Double New England IPA which they brewed in collaboration with Saskatoon’s Shelter Brewing. Next up is a CRANBERRY SAISON from Swift Current’s Black Bridge Brewery. This will be followed by a WINTER SOUR from Nokomis Craft Ales.

Feb. 5: MONTHLY ALES MEETING. If you are interested in learning more about the art of homebrewing then come sit in on a meeting with some of the most passionate homebrewers in the city. All skill levels are welcome from the novice to the veteran home brewer. Meetings are held on the first Wednesday of the month in the Bushwakker basement clubroom. This month’s presentation topic is X-Category – Provisional Styles. 8:00 PM.

Feb. 7: FIRST FIRKIN FRIDAY. A decades-old Bushwakker tradition! A piper from the Regina Police Services Pipes and Drums leads a keg of special brew in a procession throughout the brewpub. A guest volunteer is selected to wield the handmade wooden maul affectionately referred to as The Mighty Firkin Wakker and attempt to tap the firkin in one mighty blow. This month firkin offering is a COFFEE SASKADIAN BLACK IPA. A unique collaboration we created with Regina’s Caliber Coffee Roasters. The delicious suds-soaking experience takes place at 5:30 PM. 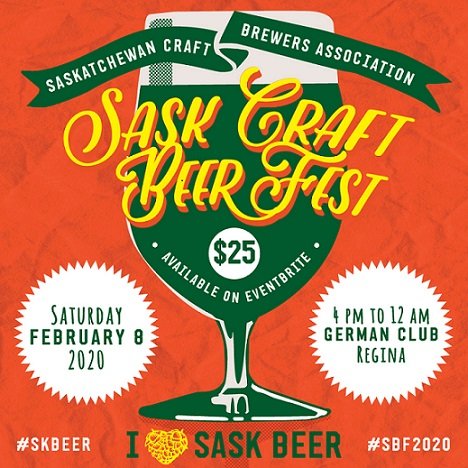 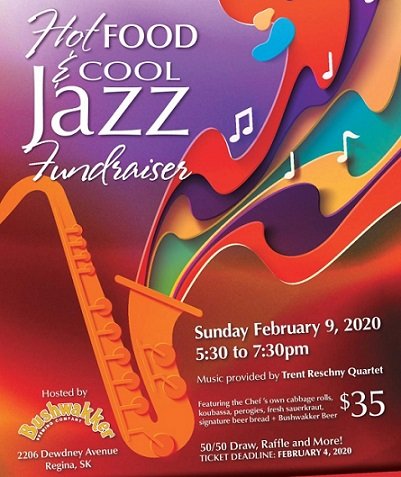 Feb. 9: CECILIAN CHAMBER SERIES STEAK NIGHT FUNDRAISER. Enjoy a small Saskatchewan Hot Plate and a half pint of any regular Bushwakker beer plus a performance from the Trent Reschny Quartet. Raffle draws and 50/50. 5:30 PM – 7:30 PM. Tickets are only $35 each and are available at www.cecilianchamberseries.ca Deadline to purchase tickets is Tuesday, February 4th. 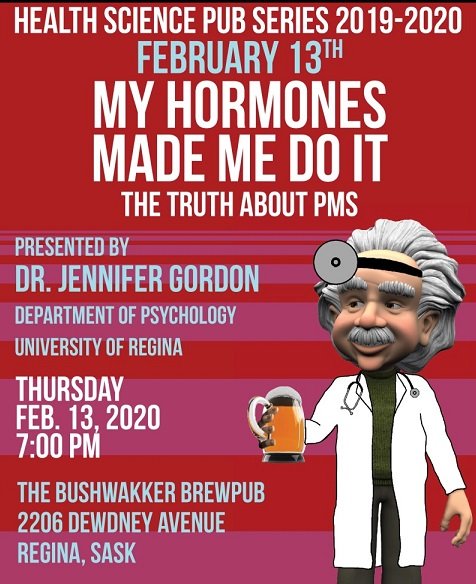 Feb: 13: SCIENCE PUB – “My hormones made me do it: the truth about PMS.” Our wildly popular Science Pub Series has returned for an eighth incredible season! Enjoy lectures on scientific topics of general interest in both our Arizona Room (main floor banquet room) and basement clubroom over fine craft beer and award-winning pub cuisine. The room opens at 5:00 PM. Avoid disappointment and come down early for dinner and a pint before the presentation which begins at 7:00 PM. This month’s lecture will be presented by Dr. Jennifer Gordon, Department of Psychology, University of Regina, CIHR Canada Research Chair in Women’s Mental Health. Popular opinion suggests that most, if not all, women suffer from moderate to severe premenstrual syndrome (a.k.a. PMS), becoming emotionally sensitive, irritable, and irrational for several days out of every month. To what extent is this view correct? How much do hormones like estrogen and progesterone really affect women’s daily mood? Come to this talk to find out what science has to say on the matter!

Feb. 22: SASK SAMPLER. The biggest Bushwakker Folk Night of the year! Up-and-coming folk artists from across the province strut their stuff are vying for a spot on the Regina Folk Festival, Ness Creek Music Festival and Gateway Music Festival stages. It’s not Folk Band Warz but it is a great night of Saskatchewan musical talent. Cover charge in effect. 7:00 PM.

Have you tried Hazy Little Thing from Sierra Nevada? Perhaps you’ve dipped into the new, health-conscious Slightly Mighty by Dogfish Head, or maybe tossed back a Jai Alai IPA from Cigar City.

If so, you’ve joined almost every current trend in consumption of IPAs, a style that continues to lead off-premises packaged sales by a wide margin as measured by IRI Worldwide, a market research firm that tracks category-wide sales trends of beer sold in numerous retail outlets and then produces a monthly report of its findings. The market has shifted its collective tongue when it comes to IPA, one that favors softer-on-the-palate, juicy IPAs where the old lines of distinction between malts and hops are less prominent.

Introduced from its bayside residence in Tampa at Cigar City Brewing, the jazzily named Jai Alai is another growth leader. An early response to the juicy craze, albeit with bitterness still in play, it has been penetrating new markets faster than a pelota hurled from a cesta. For those not familiar with its parlance, Jai Alai is a high-speed betting game imported from the Basque country and loved by generations of Florida tourists. CANarchy, the private equity-driven team that bet on a collective approach to craft brewing and counts Oskar Blues, Three Weavers, Deep Ellum, Perrin and Wasatch & Squatters in its portfolio, has scored biggest with the popularity of Jai Alai by making Cigar City beers available in widespread markets following acquisition.

The jump in Jai Alai sales underscores how the current “hazy, juicy craze” continues to drive innovation in the IPA category that enjoys nearly 40 percent of overall packaged retail sales by craft brewers in the U.S., according to IRI. Those statistics, of course, include all craft brands and not only the tighter box drawn by the Brewers Association that eliminates brands with more than 25 percent ownership by a macro brewer.

At this year’s annual migration to Denver known as the Great American Beer Festival, there was an undercurrent of disquiet, underscored by a lack of ticket sellouts the first two nights. It was as if

the trend to juicy, hazy beers has brewers preoccupied about how to deal with it at the packaged, retail level. Joining the trend would require lots of research and risk due to the less-than-stable nature of the style. Waiting for the trend to end might take a long time. And, if it ends, where will beer sales, which are closer to flat these days, go? Which way is this train headed?

Currently, there are three associated trends in the regional or super-regional craft arenas in response to the IPA trend at the local level in tasting rooms, where brewers are less concerned about packaging and shelf life.

One established trend is the “change in place” offered by Stone Brewing, which took its flagship IPA to a more citrusy profile by changing the hops in the dry hopping in 2016 (which has not led to new growth). Others may take this same approach more subtly and without necessarily announcing it. Another methodology as demonstrated by Jai Alai and Hopsecutioner, a classic bitter IPA from Terrapin concerns introducing an established IPA into new markets. This approach also includes Space Dust IPA from AB InBev’s Elysian brand. These IPAs all continue to show growth in the IRI numbers due to an expanded distribution footprint.

The remaining trend among volume craft brewers is using brand power to hitch a new line to the juicy, hazy train. On that front, witness the efforts by Sierra Nevada and New Belgium. Leading the way is the former’s Hazy Little Thing, whose success is relatively meteoric since its debut in December of 2017. Packaged sales of Hazy Little Thing grew 118 percent in year-over-year comparisons for the first 6.5 months of 2019 (which helps offset declining sales of the classic West Coast pale ale and IPAs offered by Sierra Nevada).

Dave Williams, vice-president at Bump Williams Consulting, a longtime beer analytics group, believes some of the national-level brewers have turned a corner on the “juicy, hazy” phenomenon found so often in tasting rooms, which enjoy the advantage of close-to-home distribution or no shelf life required when served across the in-house bar.

“I think those larger breweries, the more super-regional or national ones are catching up to some extent,” said Williams. “I don’t think they’ll ever get to be as nimble or prolific in terms of churning out new brands under that hazy umbrella like the smaller local guys. The larger craft brewers have been able to zero in a bit on what has stuck and what has worked underneath that umbrella. Then they went to work perfecting that and launching their own version of it in a wider footprint. It may be a bit more shelf stable and not as volatile. I think that’s where they’re catching up. They know what’s working from a profile or characteristic perspective, and they’re now rolling it out to the masses.”

Juicy and hazy beer will remain a style better suited on a local scale as demonstrated by the success of New England craft brewers who are growing rapidly through self-distribution without rapidly expanding their footprint outside their respective states. Those beers that are being targeted for national distribution by larger craft operations such as Sierra Nevada, CANarchy, New Belgium or Lagunitas (whose year-round “tropical” entry is 12th of Never) are less likely to have an arpeggio of flavors such as those found in tasting rooms. Instead, they capture the style in a more monochromatic, one-note approach that has the characteristic mouthfeel and heavier hopping and bold citrusy flavor of the juicy IPA trend, but without the complexity. Apparently, that’s where shelf-life considerations start.

There are two other trends in the wake of the haze craze, which are moving out of the beer business or severely cutting back before hard times force a company out. The owners of Boulder Beer Co., for example, have decided to stop distributing and instead will maintain a seven-barrel system and a tasting room. This after four decades of being in the forefront of craft’s Front Range phenomenon.

The biggest story in the wake of this year’s GABF had a local angle and was also a response to the question of which way beer is headed. Molson Coors will drop “Brewing” from its name in favor of “Beverages.” It will also move its headquarters to Chicago from Denver and will more aggressively pursue product lines outside of beer. Pretty heady stuff after four years of the hazy, juicy IPA trend and an ongoing decline in sales of traditional American premium beers, including those of Golden, Colorado-based Coors Brewing Company.

Perhaps we should stop here and ask, “What, precisely, is the flavor profile of a juicy, hazy IPA?” For starters, not all of them are so hazy. Some opt for an unfiltered approach that is less clear but not opaque.

Brewers have numerous ways of adding a wide variety of the popular citrusy hops in the boil or whirlpool as well as dry hopping to steer clear of bitterness. Then there’s a choice of non-flocculating yeasts that end up in unfiltered beer.

TIME OUT- YET ANOTHER DOCTOR STORY

A 90-year-old man said to his doctor, “I’ve never felt better. I have an 18-year-old bride who is pregnant with my child. What do you think about that?”
The doctor considered his question for a minute and then said, “I have an elderly friend who is a hunter and never misses a season. One day when he was going out in a bit of a hurry, he accidentally picked up his umbrella instead of his gun. When he got to the Creek, he saw a beaver sitting beside the stream. He raised his umbrella and went, ‘bang, bang’ and the beaver fell dead. What do you think of that?”
The 90-year-old said, “I’d say somebody else shot that beaver.”
The doctor replied, “My point exactly.”