Our January Premium Wine Features are from the SPIER WINERY in South Africa. The red is their Merlot and the white is their Chenin Blanc. Both are $7.95 for a glass and $21.95 for a half litre.

Our GUEST TAP is currently pouring a DRY HOPPED CHINOOK SOUR from Saskatoon’s High Key Brewing. This will be followed by the NERD RAGE COFFEE STOUT from Regina’s Malty National Brewing and then the YUPPIE IPA MONSTER TRUCKER Double New England IPA which they brewed in collaboration with Saskatoon’s Shelter Brewing. This will be followed by a CRANBERRY SAISON from Swift Current’s Black Bridge Brewery. 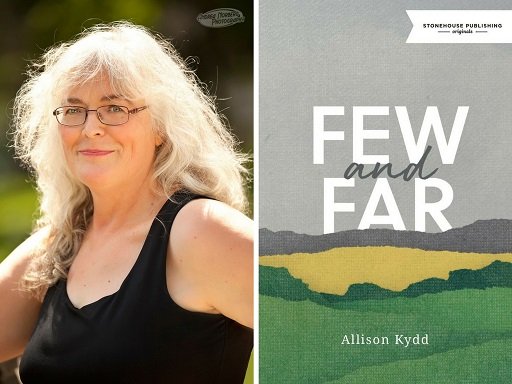 The BUSHWAKKER WRITERS CORNER current featured author is ALLISON KYDD. Allison grew up on the Saskatchewan prairies but lived in cities for much of her adult life. In 2008, she returned to rural Saskatchewan and, in 2012, Thistledown Press published her novella Emily via the Greyhound Bus, which was later shortlisted for a Saskatchewan Book Awards. Besides her novella and her recent novel, Allison has published prize-winning short stories, as well as magazine articles, newspaper articles and columns and has worked as a journalist, free-lance writer, editor and teacher. Allison is delighted to acknowledge the Alberta Foundation for the Arts and the retreats programs of both the Writers’ Guild of Alberta and the Saskatchewan Writers’ Guild (as well as the encouragement and support of family, friends and the writing community) for their assistance in completing this novel, Few and Far.

If you are interested in learning more about our province’s writers, join us in our new MONTHLY SUNDAY BOOK SIGNING SERIES which kicks off this Sunday, January 26 at 3:00 PM. More information is found in our events section below. 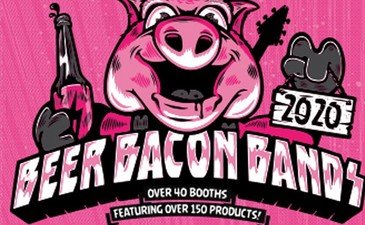 Jan. 25: BEER BACON BANDS. This popular winter celebration is now a one night affair. Be sure to stop by the Bushwakker booth. We’ll have something for hopheads, fruit beer fans and those who like to keep it light! 7:00 PM. 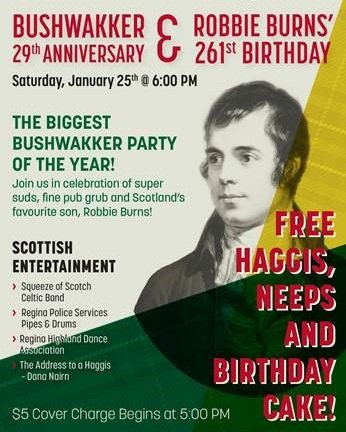 Jan 25: BUSHWAKKER 29th/ROBERT BURNS 261st BIRTHDAY BASH. Join us as we celebrate almost three decades of award-winning beer and pub cuisine as well as Scotland’s favourite son, Robbie Burns! Live rollicking reels with Squeeze of Scotch and The Regina Police Services Pipes & Drums, highland dancing, FREE HAGGIS, NEEPS and BIRTHDAY CAKE, the tapping of the “Scottish” birthday firkin, plus the Address To a Haggis from Dana Nairn. A great way to shake those January blahs. The dance floor will be open! $5 cover charge in effect. 6:00 PM.

2019 was an interesting year for craft beer, seeing it stray further than ever from the ideals of beer purity laws from a bygone Bavarian era. While hops, barley, water and yeast are as relevant as ever, adjuncts have mostly lost the purist stigma they held not long ago. In fact, additives of all kinds are largely what are fueling the latest craft beer craze. Let’s pick apart the data and see what we can extrapolate about the state of beer and where it may be headed.

Total dollar sales for all beer over the last 52 weeks rung in at more than $36 billion, which is up 2.8 percent from the previous year, while total volume sales were up just 0.4 percent, pointing to continuing customer willingness to pay more money for beer, along with gradual, consistent inflation, which has contributed to higher prices among most commodities. While the days of the $8 dollar six-pack are more or less gone, there’s more to blame than simply inflation. The styles that are commanding the most attention also require a ton of raw materials – namely massive hop, fruit and grain bills, which drive prices up considerably. Often, the selling point is more to do with the quality of a special ingredient rather than the quantity – think name-brand, designer hops or Madagascar vanilla with Ceylon cinnamon sticks.

The Numbers: As always, the data we’ve examined comes from IRI Worldwide, a market research firm that tracks category-wide sales trends of beer sold in numerous retail outlets and then produces a monthly report of its findings. These findings can be used to provide real-time insight into the ever-changing beer marketplace, both Craft and Macro. They can also help industry participants adapt to the marketplace and help you make more informed choices as a consumer. To save you the spreadsheet-trawling, we’ve pieced together the most important changes in beer sales over the year 2019 and will compare them to the prior year.

Before we delve further into this year’s data, here are a few things to keep in mind – these numbers are on an international scale and may not represent individual brewery or regional sales accurately. The numbers also do not draw a hard line between beer styles within certain categories, which could mask sales trends of smaller brewers. They track sales of packaged beer only and from a few different sources, including convenience stores (think gas stations), a general “food” category (grocery stores, etc.), and a combined multi-outlet and convenience (MULC) store category (a combination of grocery, drug, Wal-Mart/Sam’s Club, dollar stores and military stores, among others). We will focus on the MULC category. While not all-encompassing, it’s a great, well-rounded resource.

Big Styles in Craft: 2019 was another solid, stable year for Craft beer sales, which saw the segment’s dollar sales grow 2.6 percent compared to the previous year, in line with both beer’s growth as a whole and just slightly less than last year’s increase.

To the surprise of no one, IPA reigns supreme once more, with dollar sales up more than 13 percent from the previous year. This single category now comprises over 37 percent of total Craft beer sales. At around $1.6 billion of Craft’s total $4.3 billion share, it remains a force to be reckoned with, currently deriving its energy from juicy, hazy, milkshake examples of the style.

The popularity of these styles is now bona fide, well beyond a passing trend. The question is no longer “What will come next?” after milkshake brews, but “How will they evolve?” To that end, we can expect brewers to assimilate all of what is currently in vogue and follow a natural progression of creativity and technical mastery.

Whereas “hazy” may have been the selling point, you can tack on “brewed with lactose” (for mouthfeel), a variety of fruits that would make Edible Arrangements jealous, and even more adventurous grain bills. The brewers making these beers aren’t just pulling ingredients out of a hat. The beers that stand the test of time within this stylistic realm will reflect a mastery of the craft, with an enhanced focus on mouthfeel and the white rabbit of flavor balance and order, one of the most difficult elements to perfect within a brew. When the stated goal is to brew a beer with all the qualities of an apple pie, you’ll ideally taste the key flavors in the same order and proportion you would in the actual baked delicacy.

A man comes into the ER and yells, “My wife’s going to have her baby in the cab!” I grabbed my stuff, rushed out to the cab, lifted the lady’s dress, and began to take off her underwear. Suddenly I noticed that there were several cabs, and I was in the wrong one.
-Dr. Mark MacDonald, San Antonio, TX

At the beginning of my shift I placed a stethoscope on an elderly and slightly deaf female patient’s anterior chest wall. Big breaths,” I instructed. Yes, they used to be,” remorsefully replied the patient.
–Dr. Richard Byrnes, Seattle, WA

One day I had to be the bearer of bad news when I told a wife that her husband had died of a massive myocardial infarct. Not more than five minutes later, I heard her reporting to the rest of the family that he had died of a “massive internal fart.”
–Dr. Susan Steinberg, Manitoba, Canada