Our January Premium Wine Features are from the SPIER WINERY in South Africa. The red is their Merlot and the white is their Chenin Blanc. Both are $7.95 for a glass and $21.95 for a half litre.

Our GUEST TAP is currently pouring the LONDON FOG PORTER from Saskatoon’s High Key Brewing. This will be followed by a RASPBERRY WHEAT from Regina’s Pile O’ Bones Brewing and then a DRY HOPPED CHINOOK SOUR and a COFFEE STOUT. 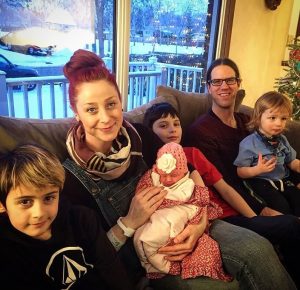 Congratulations to longtime Bushwakker server Crystal for ringing in the new year with the birth of her fourth child! Verity Broda is her first daughter and was born shortly after 3:00 AM on January 1st. Crystal claimed the title as “Mother of the First Baby Born in Regina in 2020.” If you know Crystal like we do, you’ll understand that she would have been very “strategic” in her planning nine months ago to ensure all those cash and prizes would be hers!

The BUSHWAKKER LOCAL ARTIST WALL for the month of January features the works of JENN JORDAN. Jennifer is the sister-in-law of long time Bushwakker supporter and number one local live music fan, Jeff “Redbeard” Corbett. Redbeard’s wife, Joanne Corbett, has also previously displayed her artist talents on her wall. Jeff and his family must certainly feel at home at The Bushwakker and we are pleased to showcase the works of this talented family. Jennifer’s artist bio is as follows: 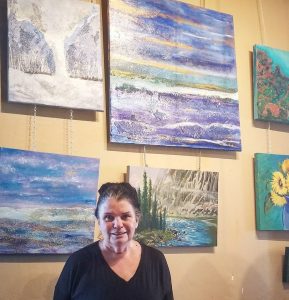 My name is Jennifer Jordan. I was born in Ottawa, Ontario and grew up in Regina. I graduated from Manitoba’s Red River College in 1982 with a degree in Interior Design. I was a floral designer at Buds & Blossoms and The Flower Gallery in Regina for many years. I lived in Bermuda for five years and was greatly influenced by the vibrancy of the culture and the people of the island. I have always been draw to rich colours; I even received an “A” in kindergarten for colour matching. I enjoy painting anything which evokes emotion in people and makes some sort of real connection with them. I have displayed my works in various shows with both The Aurora and Brushworks Arts Guilds. I hope my works will draw out some latent emotions, either good or bad, to help enhance the human experience.

For artist inquiries you can reach Jennifer at sixsigmaba@gmail.com. Enjoy her vibrant and colourful works all this month!

Jan 16: SCIENCE PUB – “The consensus is in: Evidence supporting human induced climate change.” Our wildly popular Science Pub Series has returned for an eighth incredible season! Enjoy lectures on scientific topics of general interest in both our Arizona Room (main floor banquet room) and basement clubroom over fine craft beer and award-winning pub cuisine. The main floor room opens at 5:00 PM and once it reaches capacitythe basement clubroom will then open. Avoid disappointment and come down early for dinner and a pint before the presentation which begins at 7:00 PM. This month’s lecture will be presented by Dr. Britt Hall, Department of Biology, University of Regina. Dr. Britt Hall will present three lines of evidence supporting the scientific consensus that our global climate is changing in response to increased greenhouse gas emissions released by human activities.  The overarching goal of her Pubs talk, which is also part of the Academics for Climate Community Speaking Series, is to provide concerned citizens with information that will help them to be confident participating in actions supporting our climate.

Jan. 25: BEER BACON BANDS. This popular winter celebration is now a one night affair. Be sure to stop by the Bushwakker booth. We’ll have something for hopheads, fruit beer fans and those who like to keep it light! 7:00 PM.

Jan 25: BUSHWAKKER 29th/ROBERT BURNS 261st BIRTHDAY BASH. Join us as we celebrate almost three decades of award-winning beer and pub cuisine as well as Scotland’s favourite son, Robbie Burns! Live rollicking reels with Squeeze of Scotch and The Regina Police Services Pipes & Drums, highland dancing, FREE HAGGIS, NEEPS and BIRTHDAY CAKE, the tapping of the “Scottish” birthday firkin, plus the Address To a Haggis from Dana Nairn. A great way to shake those January blahs. The dance floor will be open! $5 cover charge in effect. 6:00 PM.

When Chicago-area craft brewery Kings & Convicts Brewing Co. announced it was purchasing Ballast Point, the news caused a lot of chatter among beer fans. The sale bucks the trend of multinational corporations snatching up independent breweries. This is quite the opposite–a tiny, relatively unknown Chicago-based brewer buying a longstanding, nationwide name. Further, Kings & Convicts bought Ballast Point from Constellation Brands, owner of global brands like Corona and Modelo. Constellation had acquired Ballast Point just four years ago – for a whopping $1 billion. Terms of the new deal were not disclosed, but it did include all of Ballast Point’s locations, with the exception of the production brewery in Daleville, Virginia.

Since the news broke last month, Brendan Watters, co-founder and CEO of Kings & Convicts, has spent much of his time on the phone fielding media questions.

“The biggest reaction has been ‘What the hell?,’” Watters says. “Quickly followed by ‘Who the hell are you people?’”

Watters, an animated and outspoken fellow with a thick Australian accent, understands the confusion.

“People are unable to process how this could possibly take place,” he says. “This just doesn’t happen.”

“Whenever everyone else is zigging, we’re going to zag. That’s kind of that down under mentality from Australia,” Watters says. “When you got all this authority of people saying what you should do, we tend to go against the grain.”

To make it happen, Watters and his business partner, Christopher Bradley, brought on two new investors, in addition to themselves and two others who were already on board at Kings & Convicts.

Watters stresses that he and his business partners have been longtime fans of Ballast Point.
“We’ve always loved their beer, their quality control, and everything that made them special,” Watters says. “Our other investors are all private individuals, people I’ve worked with and have gone to the well with me before. Quite frankly, this was just an opportunistic way for us to secure this, and Chris and I will still be operating and running it ourselves.”

The Brewers Association (BA), the membership organization for U.S. craft brewers and publisher of CraftBeer.com, establishes the craft brewer definition so it can serve its members through resources and provide data. BA Chief Economist Bart Watson says the BA evaluates its craft data set each year during an annual review and, “Our initial sense is yes, it appears based on what we know about the company, the Kings & Convicts Brewing Co. will remain a craft brewer with Kings & Convicts and Ballast Point brand families.”

“Independence is not something I take for granted,” Watters says. “At Kings & Convicts, we have the seal on our cans, and proudly fly the flag.”

With a fresh perspective, Watters believes Ballast Point has a strong future.

“Kings & Convicts has always been a little roguish, a little anti-authority, and we’re going to bring back that little bit of flair that’s been lost as Ballast Point being part of a larger company,” he says.

Watters spent the majority of this week in California meeting with Ballast Point employees, and he is looking forward to tapping into their potential.

“The excitement came [Wednesday] morning at the Miramar brewery, seeing the look on the employees’ faces as they realized who we were. Seeing these employees sit there and see their shoulders perk up, as they ask questions about what we can do to get back out and engage with the community, providing focus and direction for people that are hungry for it,” Watters says.

“They’ve been doing this for ages, all they need is to know that we got their back.”

A man is in his front yard attempting to fly a kite with his son.
However, every time the kite gets up into the air, it comes crashing back down.
This goes on for a while, when his wife sticks her head out of the front door and yells, “You need more tail.
The father turns to his son and says, “Son, I’ll never understand your mother. Yesterday, I told her I needed more tail, and she told me to go fly a kite!