From the Bushwakker management and staff we wish you a peaceful holiday season filled with comfort and joy. May you enjoy good times spent with family and friends over good food and good beer!

Our December Premium White Wine feature is Smoking Loon Pinot Grigio from California. The Premium Red Wine feature is Circus Malbec from Argentina. Both are $8.50 for a glass and $22.95 for a half litre.

Our GUEST TAP is currently pouring the WEIRD FICTION Dill & Salt Kettle Sour from Regina’s Malty National Brewing. Next up is a LONDON FOG PORTER from Saskatoon’s High Key Brewing. This will be followed by a RASPBERRY WHEAT from Regina’s Pile O’ Bones Brewing. 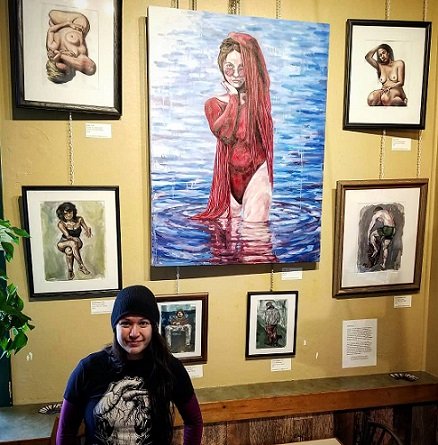 The Bushwakker LOCAL ARTIST WALL for the month of December features the works of CARMEN BEATON. Her artist biography is as follows: I was born and raised in Regina. Visual art has been a passion of mine for as long as I can remember. I’ve wanted a career as an artist ever since I was little. For a few years in university, I lost sight of that dream when I pursued my interest in science. However, after working in a microbiology lab for five years, I found myself being drawn back to my artistic roots. That was in early 2017. Since then, I have been dedicated to my rediscovered goal of being a professional artist, and I couldn’t be happier! My work focuses on portraits and the human figure. Exploring different palettes and mark-making to articulate human flesh is something that will never get old for me. I enjoy observing the endless range of emotions, facial expressions, and body language demonstrated by the people around me. I find these elements so fascinating, even those that are associated with just simple, everyday actions. It is these human qualities and behaviours that influence what I choose to paint. Enjoy Carmen’s work all this month! 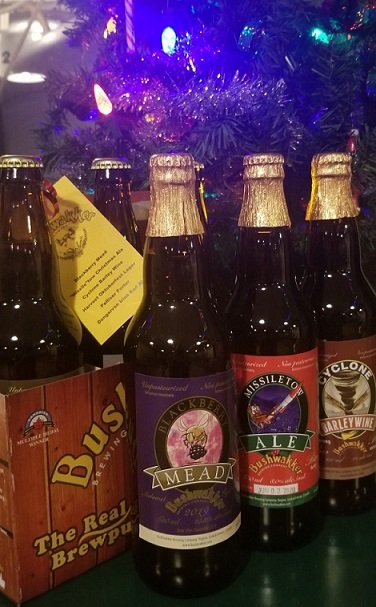 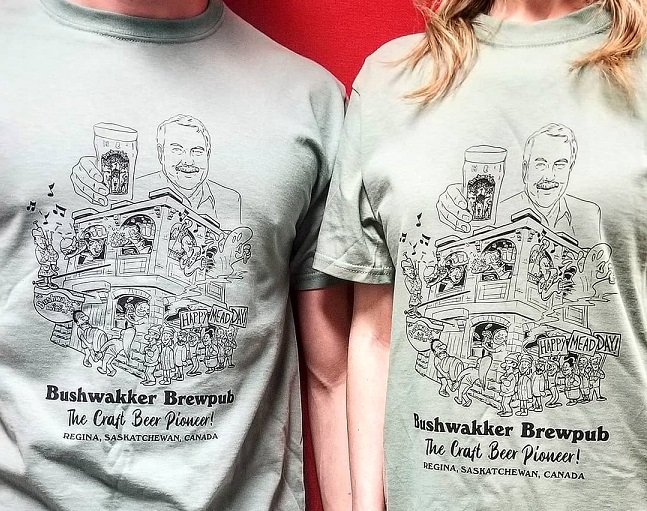 Bushwakker Gift Ideas for the Craft Beer Enthusiast on Your List.

Perhaps one of our brand new Bushwakker “Craft Beer Pioneer” T-shirts! Bushwakker Growler Gift Boxes include your choice of a glass or insulated black stainless steel Bushwakker Joe Fafard growler, two pint glasses and a gift certificate redeemable for a growler fill. Our Christmas Variety Six-Pack includes some of our seasonal and specialty offerings including bottles of Blackberry Mead and “Missile”tow Christmas Ale (available December 14th), our ornate fancy Hop Handle Growler Christmas Package with 2 Glasses and a Growler Fill is also back by popular demand…and you can’t go wrong with a Bushwakker gift card! 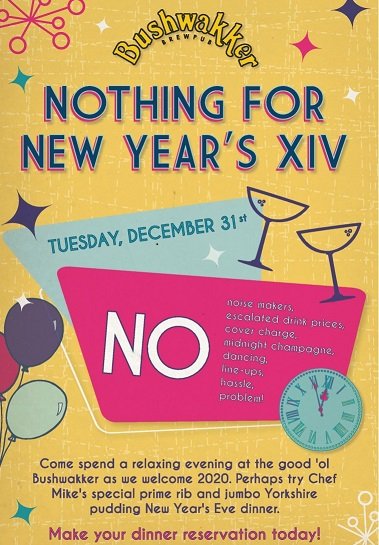 Dec. 31: Nothing For New Year’s Eve 14. Regina’s biggest non-event of the year returns! Over a decade ago we offered you a simple formulated event and you loved it. No noise makers, no escalated drink prices, no cover charge, no midnight champagne, no dancing, no line-ups, no hassle, no problem! Come spend a relaxing evening at the good ‘ol Bushwakker as we welcome 2020. Perhaps try Chef Mike’s special prime rib and jumbo Yorkshire pudding New Year’s Eve dinner. What a meal to finish off the year! Hurry and make your dinner reservation today!

Jan. 3: FIRST FIRKIN FRIDAY. Kick off your new year with a “bang!” Enjoy the pomp and circumstance of this long-standing Bushwakker monthly tradition. A keg of special beer is paraded throughout the brewpub in a procession led by a piper from The Regina Police Service Pipes & Drums. A volunteer is selected to wield the handmade wooden maul affectionately called The Mighty Firkin Wakker and attempt to tap the firkin in one mighty blow. This month’s firkin will be a brand new offering – a SPICY CHOCOLATE STOUT. 5:30 PM.

Beers to Leave for Santa on Christmas Eve

Christmas and beer go hand in hand, but what about the mythical figure that makes the season truly special? I’m speaking of Santa Claus (or jolly old St. Nicholas or Kris Kringle, etc.), who holds the unenviable task of delivering presents to all the children on his list. Though he has a tough job, perhaps one thing could make his night better: Fine craft beer. Read on to explore this list of beers to leave for Santa on Christmas Eve night.

“Christmas time is here; happiness and beer; drinks for all and adults call their favorite time of year.”

While those might not be the exact lyrics from that beautiful piece of music from Vince Guaraldi in A Charlie Brown Christmas, the message works well for beer connoisseurs when the holidays roll around, as there’s something exquisitely special about beers at Christmastime.

With that in mind, there is one person that perhaps deserves a beer more than anyone else around the holidays. You know, the guy known for his booming laugh, rosy cheeks and rotund figure with a penchant for magical abilities?

No, I’m not talking about Wilford Brimley in Cocoon, but rather Santa Claus, the man responsible for delivering gifts to children on Christmas Eve.

Certainly, all that delivering is a tall task, so Santa is often welcomed into homes by leaving cookies out at night so that the portly, hirsute, bespectacled gentleman will have nourishment as he rappels down chimney chutes with reckless abandon.

Sometimes, though, the winsome and chipper bloke might prefer to be left something that will truly keep that rosiness in his cheeks for the rest of the night.

That’s right: Maybe Santa Claus would prefer to be left some delectable beers by Christmas trees as he does his nightly rounds.

With that in mind, read on to explore a few beers that would surely bring a smile to old Sinterklaas’s lips as he sipped a hearty brew before moving onto the next house (where he would hopefully find another nice tipple).

Santa’s Little Helper Port Brewing Co.
This Imperial Stout features candi sugar and oaky notes with a finish of espresso. Sharing a name with the dog in The Simpsons, who was famously rescued around Christmastime, this offering from Port Brewing Co. shows Mr. Claus imbibing a foamy brew with an elf as well a reindeer, perhaps portending what Santa will get into with his helpers once his busiest day of the year is completed.

Though this piece is not about the logistics of Santa’s task, it is truly astonishing that Santa is able to visit all the children around the world in such a short period of time, but I suppose that’s what a magical chap like Sinterklaas can do. It also helps that his sleigh is piloted by ace pilot, Rudolph.

If you really wanted to give back to the legendary Kris Kringle, perhaps you could leave both the original Christmas Ale and Holidale to serve as a sort of double feature. Surely, Santa could imbibe one as he left presents with you and then end the night with the second one as his duties are winding down.

Samuel Adams Utopias The Boston Beer Co.
A wondrous holiday deserves a wondrous beer, and there is perhaps no more special and spectacular brew than Samuel Adams Utopias by The Boston Beer Co. This hearty and astonishing creation is so rare that a bottle of this might be a bit too much to leave for somebody as a gift. As such, a simple shot glass’s worth of this liquid gold would be plenty.

Aged in myriad barrels and ballooning to 28 percent ABV in its more recent versions, this brew would surely give Saint Nick a jolt as he moved on from your house to the next.

Samichlaus Schloss Eggenberg
Perhaps one of the most famous winter warmers in the world, this beer’s name even means Santa Claus in Swiss German. Adorned with an image of the man himself, this beer clocks in at a whopping 14 percent ABV.

Brewed on site at Eggenberg Castle in Vorchdorf, Austria, where commercial brewing has taken place since the year 1681, this beer would be perfect for Mr. Claus to collect and imbibe over the years for a (freezing) night at the North Pole, where he can tip back a vertical tasting of this silky smooth Bock beer.

Samuel Smith’s Brewery
The first-ever holiday beer imported to the U.S., Samuel Smith Brewery’s Winter Welcome would surely make Old Saint Nick feel at home were he to find this brew paired with a plate full of oatmeal raisin cookies.

A dark, roasty and full-bodied Christmas seasonal, Winter Welcome features a delectable malt bill that combines elements of smoke, roast and mild sweetness. Along with a dense earthiness courtesy of the beer’s classic English hop varietals (Fuggles, Goldings), this brew would surely support Santa as he journeyed around the globe delivering presents.