Our December Premium White Wine feature is Smoking Loon Pinot Grigio from California. The Premium Red Wine feature is Circus Malbec from Argentina. Both are $8.50 for a glass and $22.95 for a half litre.

Our GUEST TAP is currently pouring the BERRY MERINGUE IPA from Saskatoon’s High Key Brewing. Next up is the HOP CASSEROLE 4 from Regina’s Malty National Brewing. This will be followed by Regina’s Pile O’ Bones COLD BREW AMERICANO STOUT and then a LONDON FOG PORTER from High Key Brewing.

Bushwakker Gift Ideas for the Craft Beer Enthusiast on Your List.
Perhaps one of our brand new Bushwakker “Craft Beer Pioneer” T-shirts! Bushwakker Growler Gift Boxes include your choice of a glass or insulated black stainless steel Bushwakker Joe Fafard growler, two pint glasses and a gift certificate redeemable for a growler fill. Our Christmas Variety Six-Pack includes some of our seasonal and specialty offerings including bottles of Blackberry Mead and “Missile”tow Christmas Ale (available December 14th), our ornate fancy Hop Handle Growler Christmas Package with 2 Glasses and a Growler Fill is also back by popular demand…and you can’t go wrong with a Bushwakker gift card!

Dec 6: FIRST FIRKIN FRIDAY: Enjoy the pomp and circumstance of this long-standing Bushwakker monthly tradition. A keg of special beer is paraded throughout the brewpub in a procession led by a piper from The Regina Police Service Pipes & Drums. This month’s special holiday edition firkin will see the return of our very
popular Kraken Spiced Black Rum-infused “Missile”tow Christmas Ale. The suds-soaking spectacle takes place at 5:30 PM. 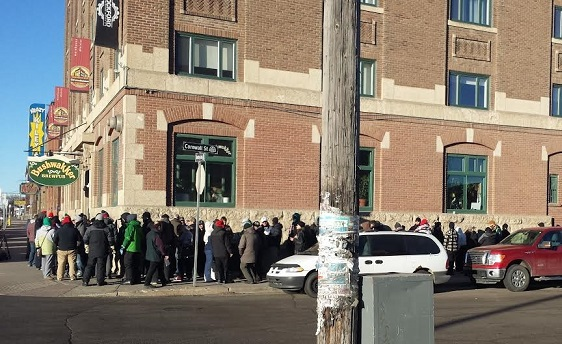 Dec. 7: THE 2019 BUSHWAKKER BLACKBERRY MEAD RELEASE – 11:00 AM SHARP! A true Saskatchewan phenomenon! There is only one Bushwakker Blackberry Mead. Our offsale inventory of bottles sells out quick! A new record was set last year when the devoted mead enthusiasts braved a Saskatchewan winter night and began forming a line over 21 HOURS before it went on sale! The line-up stretched north past the building by 10:00 AM. Experienced mead lovers come prepared with ice fishing huts and propane heaters. The annual overnight winter brewpub campout has become a strong tradition with serious mead enthusiasts. We will be serving hot chocolate to keep the chilly mead lovers warm. We have been brewing our Blackberry Mead all year long preparing for our annual kick off to the holiday season. 400 pounds of specially selected Lumsden Valley honey and over 80 pounds of blackberries in every batch. View the days remaining to Bushwakker Mead Day on our countdown clock over our brewhouse door. Catch the buzz. #MeadDay 2019 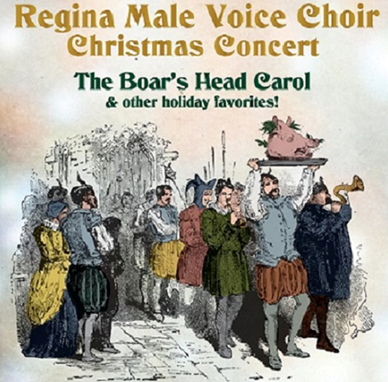 Dec. 11: Wednesday Night Folk – Special Christmas Edition. THE REGINA MALE VOICE CHOIR Christmas concert featuring The Boar’s Head Carol. Get into the holiday spirit with this one hour concert featuring Canada’s longest continuously performing male voice choir. The singing of the Boar’s Head Carol whilst a massive boar’s head is paraded throughout the pub is the highlight of the evening. 8:00 PM. 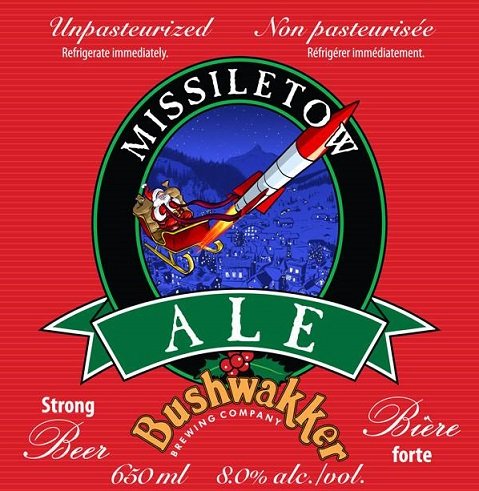 Dec. 14: “MISSILE”TOW CHRISTMAS ALE RELEASE. Avid fans of our “other” Christmas specialty brew look forward to this day every year. Rich malt flavours with plenty of depth and complexity abound. The perfect ale to sip on whilst curled up with a good book in front of a fireplace on a cold Saskatchewan winter night. See you at 11:00 AM sharp! Catch the buzz! (#MEADDAY2019)

Dec. 15: Holiday Market 2nd edition. Presented by both former and current Bushwakker staff. It is no secret that Bushwakker staff are very talented people. Enjoy their creative holiday wares in this special craft sale held in the Bushwakker Arizona Room. 1:00 PM – 5:00 PM.

From: The Beer Connoisseur

New Belgium Brewing Co. in Fort Collins, Colorado has been acquired by a Kirin subsidiary called Lion Little World Beverages. According to the Brewers Association, New Belgium was the 4th-largest craft brewery in the country last year.

The full release regarding this news is below.
• Lion Little World Beverages to acquire New Belgium Brewing, one of the leading independent craft breweries in the U.S. with a commitment to invest in innovation that fuels future growth of its brands in the U.S. and global markets.

• Both companies share a purpose-driven culture with a focus on sustainability and inclusion, with Lion Little World Beverages committed to continuing New Belgium’s “force for good” mission.

Lion Little World Beverages, the global craft beverages business of Australasian brewer, Lion and New Belgium Brewing today announced that the companies have signed a definitive agreement for Lion Little World Beverages to acquire 100% of New Belgium in an all cash transaction. The transaction is expected to close by the end of 2019, pending approvals by regulators and the Employee Stock Ownership Plan (ESOP) in addition to other customary closing conditions.

New Belgium is a pioneer of world-class beer and wood-aged sours in the United States.  Since the company was established in 1991, it has grown to become a leading craft brewer with adored brands, such as Fat Tire Amber Ale and Voodoo Ranger IPA, in addition to two state-of-the-art brewing facilities in Fort Collins, Colorado and Asheville, North Carolina, and a national distribution platform.

“We’re excited to welcome New Belgium Brewing into our global family of craft beverage brands. Since meeting the New Belgium team, we’ve been incredibly impressed not just with their commitment to world-class beer and the way they bring their brands to life, but their purpose-led business model and connection to the community – all values we share at Lion,” said Matt Tapper, Managing Director of Lion Little World Beverages.

“Our owner, Kirin, has entrusted Lion with leading its global craft beer strategy and today’s announcement is a real milestone for us. Over time, we see a great opportunity to work together with New Belgium Brewing to grow a wider portfolio of craft beverages in the U.S., and build on the great business that Kim, Steve and the entire New Belgium team have created.”

Kim Jordan, Co-Founder of New Belgium Brewing said: “If there are three things we’re known for at New Belgium, it’s our dedication to innovation and excellence in beer, our commitment to the culture and wellbeing of our co-workers, and our crazy enthusiasm for being a business role model. We were thinking about these three things as we began to explore being a part of the Little World family.”

“We’ve been pushing the boundaries of beer innovation as pioneers for almost three decades. Little World are brewers’ brewers and we have really felt their commitment to this ancient craft. We’re absolutely excited about helping to build a collective of breweries – each with their own vibe – who share the same commitment to delighting beer drinkers with great beer, great businesses, and great collaboration among us.”

Lion Little World Beverages is the global craft beverages business of Lion – a leading brewer headquartered in Australia owned by Kirin Holdings Company Limited. With nearly 4,000 people employed across Australia, New Zealand, the UK, Asia and the U.S. Lion is a leader in craft brewing. Its portfolio includes many well-known brands such as James Squire, Little Creatures, Emerson’s, and Panhead.

Lion Little World Beverages was first established as ‘Lion Global Markets’ in 2015 and entrusted with leading Kirin’s global craft beer strategy in new market expansion outside Japan, Australia and New Zealand. It has since evolved, launching pioneering Australian craft brand Little Creatures in the U.S., UK and Asia between 2017 and 2019, and recently adding UK craft brands Fourpure and Magic Rock to the family.

The Lion Little World Beverages team blends Lion’s 170 years of history with Kirin’s commitment to quality, craftsmanship and R&D expertise to create a collective of like-minded entrepreneurs who are empowered to keep doing what they do best, while benefitting from being part of a larger, scaled business. A common cultural thread binds Lion Little World Beverage’s brands and people together, with a commitment to craftsmanship, community and sustainability at the core.

New Belgium Brewing is a nationally distributed brewery recognized as a leader in sustainability and social responsibility. Founded in 1991 in Fort Collins, Colorado, the company expanded to Asheville, North Carolina, in 2016 and Denver, Colorado, in 2018, and is now the fourth largest craft brewery in the U.S. Dedicated to proving that business can be a force for good, New Belgium is a Certified B-Corp and was the first brewery to join 1% for the Planet. The brewery has donated over $26 million to charitable causes since 1991.

A woman’s husband had been slipping in and out of a coma for several months, yet she had stayed by his bedside every single day.
One day, when he came to, he motioned for her to come nearer.|
As she sat by him, he whispered, eyes full of tears, ‘You know what? ‘You have been with me all through the bad times. When I got fired, you were there to support me. When my business failed, you were there. When I got shot, you were by my side.
When we lost the house, you stayed right here. When my health started failing, you were still by my side… You know what Martha?’
‘What dear?’ she gently asked, smiling as her heart began to fill with warmth.
‘I’m beginning to think you’re bad luck.’