Our GUEST TAP is currently pouring the LOKI IMPERIAL IPA from Saskatoon’s Paddock Wood Brewing. Next up is the FAR OUT COCONUT MILK STOUT from Malty National Brewing. This will be followed by a PINK HIBISCUS IPA from High Key Brewing in Saskatoon.

Our November Premium Wine Features are the BURNT SHIP BAY from Niagara-On-The-Lake, Ontario. The red is a Cabernet Merlot and the white is a Sauvignon Blanc. Both are $7.95 for a glass and $21.95 for a half litre.

Chef Mike’s famous low and slow prime rib dinners have returned! Our Bushwakker PRIME RIB WEEKENDS will be offered every Friday, Saturday and Sunday for the next few months. Topped with rosemary red wine au jus and served with Jumbo Yorkshire Pudding, veggies and potatoes. Available in both an eight ounce and ten ounce cut.

Bushwakker Brewpub’s Writers Corner Seeks Books! Our 4rd Edition Writers Corner Launch will take place on Saturday, November 9 at 3:00 PM. We are seeking donations of recent publications (2017-2019 publication dates) from Saskatchewan authors (all genres) to help expand our library within the Writers Corner. The goal is to gradually increase the size of the library each year. More book shelves will be installed as the number of books increases. The books in the corner library will be available for patrons interested in reading works by local authors and the books are to remain in the brewpub at all times. To be considered for the library, books must be a minimum of 40 pages and professionally bound. Please drop off a copy of your recently published book (along with purchasing information which can be shared with brewpub patrons) to Grant Frew at Bushwakker. You can email Grant at bar@bushwakker.com. Rotating individual author biographies and brief book synopsis are featured in the brewpub’s weekly newsletter and social media channels on a regular basis. 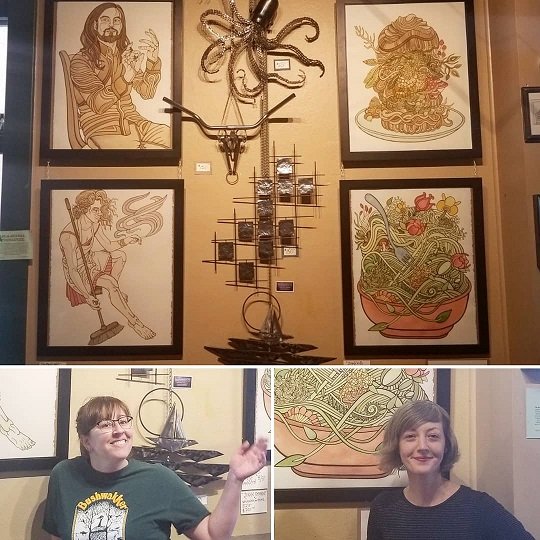 The BUSHWAKKER LOCAL ARTIST WALL for the month of November sees the return of SHAUNA PERFECT and QUIN GREIG who are two talented artists and are also Bushwakker floor staff members. Shauna’s artist biography is as follows; I was born and raised in Regina, art has always been a big part of my family in many different mediums. I grew up watching my dad make metal sculptures and decided many years ago that I wanted to give it a try. I went to school to learn the basics and am now an apprentice welder. I currently work at the Bushwakker and have also completed my third and final year of school at SIIT. Most of the material I use is scrap metal I’ve gathered from various locations or from my dad’s garage. Sometimes I’ll have an idea of what I want to create but other times I just sort of lay the pieces out in front of me and let them decide.

Quin’s artist biography is as follows: Quin C. Greig was born in Swan River, Manitoba in 1988 and was raised on a remote acreage. Now a practicing interdisciplinary artist, Quin received her Bachelor of Fine Arts with distinction from the University of Regina in 2013. While experienced working in multiple artistic mediums, she specializes in watercolor drawings. Deeply interested myth and magic, she is simultaneously, and just as importantly, influenced by the people and events she encounters in her daily life. Quin has spent years refining her signature style of line work, and has been commissioned for myriad projects on behalf of private individuals. Quin currently divides her time between her home studio and The Bushwakker Brewing Company where she has worked as a server since 2011. 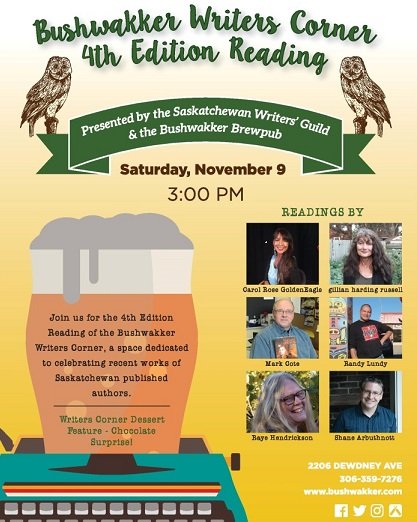 Nov. 17: Open at 11:00 AM for the RIDER HOME PLAYOFF GAME! Plenty of time to enjoy our gourmet GAME DAY BURGER & A PINT special before the 3:30 PM kickoff.

Editor’s Note: Earlier this fall The Bushwakker created two special beers in celebration of members of our local arts community. The first was Joe’s Firkin Squirrel Ale which was a dandelion and honey Pale Ale brewed to commemorate the life of Joe Fafard and the wonderful impact his artistic works made on the world as well as on The Bushwakker. The second was called the Unreliable Narrator which is an Irish whiskey and hemp Brown Ale created with the Saskatchewan Writers’ Guild to help celebrate their 50th anniversary. Although you would never hear a heavy metal band performing at one of our Monday Night Jazz & Blues or Wednesday Folk Night performances, craft beer and metal have been working some interesting magic together in other parts of the country as of late.

Three years after collaborating with Megadeth founder and front-man Dave Mustaine to make a low alcohol Belgian saison designed to appeal to craft beer newcomers with proclivities for metal music, Canadian brewery Unibroue started selling its second beer with the rock star in the United States in September. As an homage to the band’s 2011 song, TH1RT3EN, the latest brew is called Saison 13 and uses 13 different ingredients to lend notes of apricot, nectarine and spice. It clocks in at 6.1% alcohol by volume (ABV) and a low 19 International Bittering Units (IBU).

Their first collaboration, a session saison called A Tout Le Monde, still sells year-round, while Saison 13 is available in stores and bars in four-packs of 16-ounce cans and on draught while supplies last.

“Saison 13 contains a series of elements that have meaning to him and to me,” Unibroue Brewmaster Jerry Vietz says in a statement. “Over the years, all of our discussions were a major inspiration for me in the creation of this new brew; nothing was left to chance.”

In 2015, Mustaine reached out to Vietz, a voracious Megadeth fan and avid guitar player, to co-create A Tout le Monde. By both accounts Metallica’s former guitarist got deeply involved in the recipe-design process.

“He was not a passive member of the project, he’s really a partner and that was exactly what I was looking for,” Vietz told me just before they launched the beer onto the market. “It wasn’t my project it was our project.”

When they released A Tout le Monde, Mustaine said he’d consider doing another, and given that Vietz determined the singer who knew little about brewing at the time liked beers accented with fruit flavors, it comes as no surprise that the Belgian-style brewer would bring similar characteristics to their second collaboration.

“(Head brewer Jerry Vietz) takes great pleasure in what he does and we thought it was really a great union,” Mustaine said for this Forbes article in 2016.

In June, Mustaine announced he has a highly treatable form of throat cancer and cancelled most of his tour dates through the end of the year, though he’s planning a winter European tour and continues work on his 16th studio album. Between recording and undergoing cancer treatments, he may not have as much time to devote to crafting and promoting his latest beer, though based on his earlier comments to me, it may just give him a bit of the emotional boost he experienced while making and selling A Tout le Monde.

“I think it’s wrong that only one company makes the game Monopoly.” – Steven Wright