Our October Premium Wine Features are the DIABOLICA WINES from B.C. The red is a Merlot/Petit Verdot/Shiraz blend and the white is a Pinot Gris/Chardonnay. Both are $7.95 for a glass and $21.95 for a half litre.

We have received many inquiries as to when Chef Mike’s famous low and slow prime rib dinners will be back. Our Bushwakker PRIME RIB WEEKENDS will return on Friday, October 18th. Topped with rosemary red wine au jus and served with Jumbo Yorkshire Pudding, veggies and potatoes. 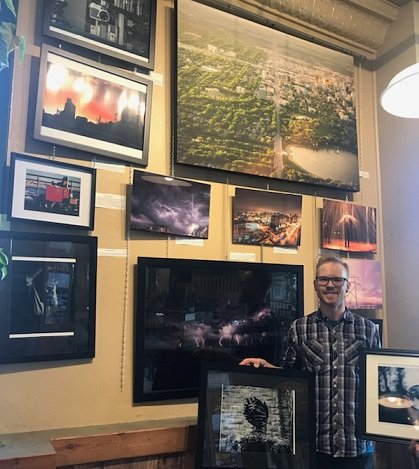 The BUSHWAKKER LOCAL ARTIST WALL for the month of October features the works of LEE HANCOCK. His artist biography is as follows; Hey everyone, my name is Lee Hancock and I am an amateur photographer residing in the Regina/Emerald Park area. I originally started photography when I was in a dark place in my life – and needed something to keep myself occupied. Eventually I nestled into my niche in the automotive photography world. However, as I age and progress I have learned to love breaking out of my own mold and exploring other forms of photography genres. These include landscape, astral, portraiture, and creative/ alternative works. I love to create imagery and show my point of view either physically in the moment or from my imagination. I take inspiration from exploring other photographers work and even from just walking around and seeing the different angles and lines that exist in our world. Thanks for viewing, and I hope you enjoy!

Oct. 13 & 14: Closed for renovations on Sunday and Monday. Happy Thanksgiving! 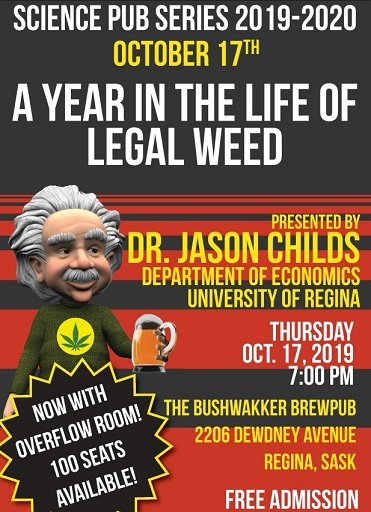 Oct. 17: NEWLY EXPANDED!!! SCIENCE PUB – A YEAR IN THE LIFE OF LEGAL WEED.  Our wildly popular Science Pub Series has returned for an eighth incredible season! To meet the growing demand we have doubled our viewing capacity by including our basement clubroom as a satellite room to view the lecture with the aid of a very large TV, Skype and a dedicated WiFi line. Enjoy lectures on scientific topics of general interest in both our Arizona Room (main floor banquet room) and basement clubroom over fine craft beer and award-winning pub cuisine. The main floor room opens at 5:00 PM and once it reaches capacity the basement clubroom will then open. Avoid disappointment and come down early for dinner and a pint before the presentation which begins at 7:00 PM. This month’s lecture will be presented by Dr. Jason Childs, Dept. of Economics, University of Regina. Reflecting on the impact and implications of legal cannabis one year on.  For legalization of cannabis to be considered a success the legal market has to replace the illicit market, yet performance on this measure has been modest at best. Come and explore the data on the legal cannabis market in Saskatchewan and across the country and the policy implications of legalization’s limited success to date. 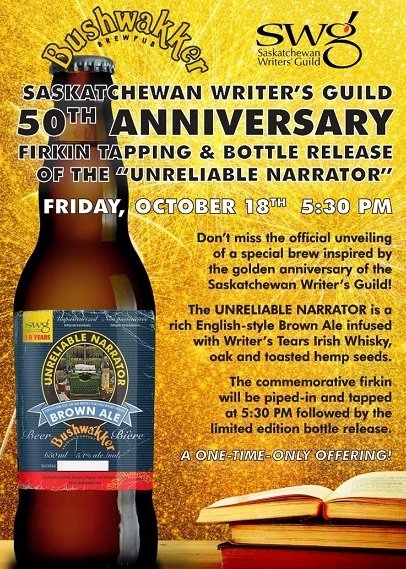 Oct. 26: THE 2019 NHL HERITAGE CLASSIC. The Winnipeg Jets play host to the Calgary Flames at Mosaic Stadium. This will be the first NHL regular season outdoor game that will be held in a neutral site territory that is not formally part of an NHL market, the first regular season game held in Regina, and the first regular season game held in Saskatchewan since 1994. Come enjoy our game day gourmet Rink Burger & a Pint specials. Choose from either our Jets Burger or Flames Burger with any regular Bushwakker pint for only $19.95. May the best burger win!

If there’s anything the craft industry loves more than talking about how craft lagers are going to be the next big trend, it’s trends in general. So far this year, the inescapable trend is hard seltzer.

If you’ve been so focused on Brexit this summer that you’ve avoided the beer news, here’s the gist: seltzer has exploded, and in peak weeks approached four percent share of volume and five to six percent share of dollar sales in scan data. Over 52 weeks, seltzer is closer to two percent share of beer by volume. If it has half that share in on-premise, that suggests seltzer could approach four million barrels this year (my back of the envelope has it as 3.8 million barrels).

Hard seltzers are typically made from fermented sugar (though methods and materials vary), and the market leading brands (White Claw and Truly) have 100 calories, five percent ABV low carbs/sugar, and are gluten free. Trend imitation is the sincerest form of trying market imitation, and an analysis of approximately 70 brands provided by former Brewbound editor Chris Furnari shows that the market appears to have coalesced around those leaders, with 100 calories, five percent ABV, one gram of sugar, and two grams of carbs as the median values in the marketplace.

Seltzers Are Here to Stay
Let me start by saying that although I can’t predict whether seltzers will still have five percent share of beer dollars in a year or two, I do think that I think seltzers (or things that look like seltzers) are here to stay. Why? To me, it starts with consumer demand. There is growing evidence that a big chunk of beer drinkers are more interested in brands that they believe fit into an active and healthy lifestyle.

As we saw in the recent Nielsen Craft Beer Insights Panel, even craft drinkers are more interested in low calorie, low carb brands that align with their fitness goals. Seltzer checks these boxes, which are undoubtedly even higher among the general beer drinking population.

What Does this Mean for Craft Brewers?
For craft brewers, the rise of seltzer probably generates two primary questions:
• What’s the interaction with craft sales?
• Should I make a seltzer?

I’ll try to answer each in turn, with the caveat that fast changing markets both lack good data and by definition shift over time and are therefore hard to predict.

Is Seltzer Drawing from Craft?
Let’s start with what little we know. Below is data from IRI covering the 52 weeks ending July 14, 2019 on where seltzer volume is coming from. It suggests that only 27 percent of seltzer volume growth is coming from beer (51 percent of 53 percent). The rest is either coming from getting new drinkers into beverage alcohol, or from increased purchases that are incremental to existing off-premise sales.

Given that per capita beverage alcohol sales don’t tend to change that much over time, I am somewhat dubious that these sales are purely incremental to beverage alcohol (though they may be to scan channels), but we’ll have to wait and see more data to see if volume is getting pulled from another channel. Regardless, this suggests that even if seltzer is sourcing share from craft in line with it’s share within beer, it’s likely not taking huge chunks of volume. Craft has about eight percent share of beer volume in scan, so at that point you’re looking at two percent of seltzer growth.

Now seltzer may have grown about 2.5 million barrels this year (using that 3.8 million barrels and current 52 week growth rate from IRI), but even with that math, you’re talking about 50,000 barrels from craft, which would lower craft growth from four percent to 3.8 percent. All of that assumes that none of the new buyers are buying craft after coming into beverage alcohol.

That back of the envelope math is backed by data from our most recent Craft Insights Panel survey. Now, I’ll caveat that a survey in May is probably not the best indicator of what went on during a summer where seltzer brands jumped exponentially, but that earlier survey data suggests not much volume flowing out of craft.
First, only 36 percent of craft drinkers said they were drinking seltzers at least once of month (compared to for example 71 percent for wine or 37 percent for hard cider). And, although 23 percent of craft drinkers said they were drinking seltzers more than a year ago (28 percent amongst 21-34 year olds), 22 percent said they were drinking them less. So there is interaction there, but it’s low level, particularly compared to other parts of beverage alcohol.

Should You Make a Seltzer?
I have no clue. But, if I were a brewery thinking about whether to fizz or not to fizz, I’d try to answer the following questions in order:
1. Do I think a seltzer fits with my overall brand identity?
2. If not, am I willing to build a separate identity for that seltzer?
3. Could a seltzer fill a part of my portfolio that is missing?
4. If so, are there other lifestyle brands that better fit my identity that can fill that gap just as well?

It’s easy to look at the eye-popping growth of White Claw or Truly and think that a seltzer brand is going to be low hanging fruit. However, as outlined above, there are some pretty clear signs that if we’re drawing a Venn diagram, seltzer demographics and craft demographics aren’t the most highly aligned.

Now, that may not entirely be a bad thing. A seltzer that authentically works with your brand and brewery might be a way to bring more people into the brewery and create some new fans. That said, if it were me, I’d be thinking about how to balance that growth opportunity with how it shifts what my brand stands for.

Think about how previous innovations have quickly diffused throughout the industry. If you’re not a first mover, there are probably going to be hundreds of options in the near future. If you’re just one of those options, do the benefits (potential new customers, learning new fermentation techniques, etc.) outweigh the costs (in terms of time figuring out how to make a seltzer, tank space, shifting identity, etc.)? For a brewery that has always tried new products, maybe the equation comes out in favor of yes. If you’re a brewer who makes only traditional German styles, maybe not.

I think an equally interesting question is number four above. Backing out from seltzer for a minute, if you spent equal time, space, and effort developing another brand – perhaps a gluten free beer or another calorie-reduced offering – could that fill the same customer space? There may be opportunities for locally-made seltzer, or seltzer with unique ingredients, but that isn’t what’s winning in the market at the moment. Brewers that build new brands that align with their existing identity are probably going to have more success in the long-run than those that completely shift gears just to chase growth.

A woman walks into a bank in New York City and asks for the loan officer. She says she’s going to Europe on business for two weeks and needs to borrow $5,000. The bank officer tells her that the bank will need some kind of security for such a loan, so the woman hands over the keys to a new Rolls Royce that’s parked on the street in front of the bank.

Everything checks out, and the bank agrees to accept the car as collateral for the loan. An employee drives the Rolls Royce into the bank’s underground garage and parks it there.

Two weeks later, the woman returns, repays the $5,000 and the interest, which comes to $15.41. The loan officer approaches her and says:

“We are very happy to have had your business, and this transaction has worked out very nicely, but we’re a little puzzled. While you were away, we checked out your accounts and found that you were a multimillionaire. What puzzles us is why would you bother to borrow $5,000?”
“Well, where else in Manhattan can I park my car for two weeks for fifteen bucks?”