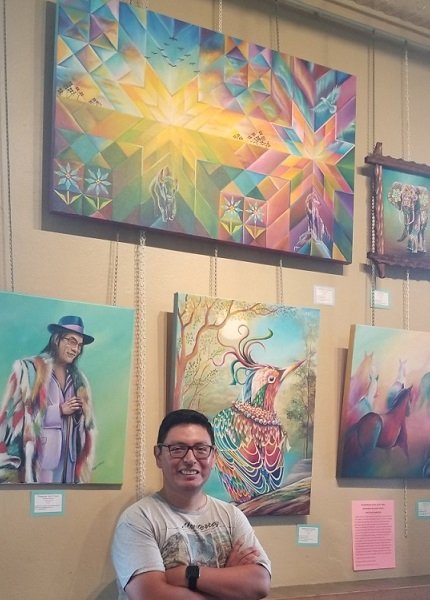 The Bushwakker LOCAL ARTIST WALL for the month of September features the works of CRISTIAN BARRENO. Cristian was born and raised in Guatemala, a country known for its deep roots with the Mayan Culture. This rich heritage has influenced and inspired Cristian since he first started painting using oils and acrylics back in the mid-nineties. Thanks to the help of his brother, Cristian moved to Canada in 2002 and pursued a Bachelor in Business Administration. Since his first weeks in Canada he continued developing his passion for painting and drawing. His themes and colors have constantly evolved, maintaining vivid colors, nonetheless. In each work he tries to achieve story telling or at least provoke a happy smile. During the past few years his wife Addy has been a great comrade in developing new ideas on blank canvases. He is very honoured to see the recognition he has gained in Regina, and plans to continue exploring this skill and encourage others to try creating art. Enjoy his vibrant, colourful works all this month!

Sept. 16: Monday Night Jazz & Blues. THE JAZZ BAND – ITS. Enjoy big band, jazz and swing from the largest band to ever grace the Bushwakker stage. 8:00 PM. 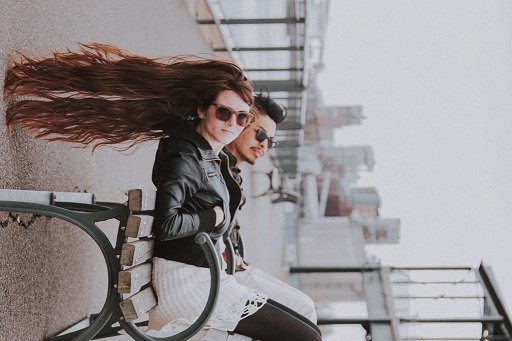 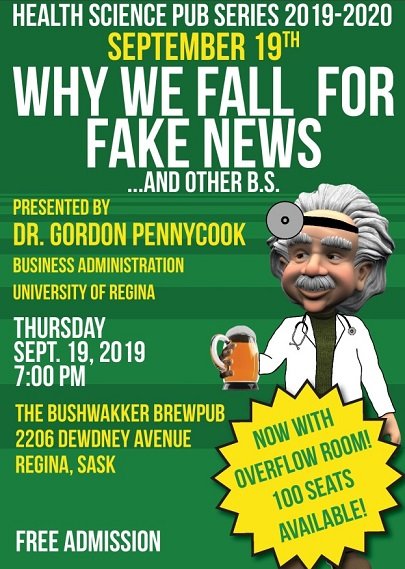 Sept. 19: NEWLY EXPANDED!!! HEALTH SCIENCE PUB – Why We Fall for Fake News (and other B.S.) Presented by the Integrated Health Research Cluster. Our wildly popular Science Pub Series has returned for an eighth incredible season! To meet the growing demand we have doubled our viewing capacity by including our basement clubroom as a satellite room to view the lecture with the aid of a very large TV, Skype and a dedicated WiFi line. Enjoy lectures on scientific topics of general interest in both our Arizona Room (main floor banquet room) and basement clubroom over fine craft beer and award-winning pub cuisine. The main floor room opens at 5:00 PM and once it reaches capacity the basement clubroom will then open. Avoid disappointment and come down early for dinner and a pint before the presentation which begins at 7:00 PM.
This month’s lecture will be presented by Dr. Gordon Pennycook, Business Administration, University of Regina. The alarming spread of “fake news” is a salient example of how human reasoning often fails. The internet and social media have made the spread of this B.S. (a technical term drawn from the literature in philosophy) ubiquitous. And this is especially true with the spread of misleading and sometimes dangerous health information. The talk will outline what the phenomenon of “fake news” (and other B.S.) tells us about the strengths and weakness of human psychology and will show how the psychology of misinformation can help us inoculate ourselves against online BS. It will also cover what to do when “alternative medicine” advocate Deepak Chopra calls you names on Twitter.

Sept. 23 – Sept. 28: BUSHWAKKER OKTOBERFEST WEEK. The official Oktoberfest celebration in Munich will be just underway as the Bushwakker weeklong Oktoberfest celebration begins. Enjoy a unique German-themed meal special every day of the week as well as a pint of our Bushwakker brewed Brew & Gold Dortmunder Export Lager. A selection of fine special order imported German and German-style bottled beers will also be available. Prosit!

Most Americans probably don’t think about barley when they crack open a cold one.

But their thirst for beer is about the only reason the once abundant crop hasn’t disappeared.

American farmers have grown barley for centuries, mostly for livestock feed but also for human consumption and for malt in beer.

Yet a steep decline in its use for feed drove annual production down by 75 percent from where it was more than three decades ago.

In the mid-1980s, farmers produced more than 600 million bushels — or 28.8 billion pounds — of barley annually, according to the U.S. Department of Agriculture.

That number plummeted to just 153 million bushels — or 7.3 billion pounds — in the most recent year ending in May.

Among the hardest hit areas between 2007 and 2017 were Kansas, Washington and North Dakota, according to the USDA’s Census of Agriculture, which is conducted every five years.

Almost all of what is produced now goes toward beer.

“Our No. 1 thing is, no barley, no beer,” said Doyle Lentz, who is on the North Dakota Barley Council board of directors.

Though a variety of grains can be used in beer, barley is the most common. And with the rise of the craft-beer culture, more consumers care about the quality and sourcing of the ingredients, industry experts say.

“People want to support small and independent local businesses,” said Bart Watson, chief economist for the BrewersAssociation. “They like understanding where the food and products they’re putting in their body come from.”

Craft beer tripled its share of the U.S. market by volume from 4.4 percent a decade ago to 13.2 percent as of last year, according to the Brewers Association. It also tends to use as much as three to four times the amount of malted grain — most often, barley — compared to non-craft beer.

“Craft brewers, almost regardless of style,” Watson said, “tend to use more malt.”

As of the latest agriculture census, Idaho and Montana — which were Nos. 2 and 3 for barley production — have surpassed the previously top-ranked North Dakota.

Those who still grow barley typically do so under contract for the malting and brewing industry.

Lentz recently planted the 121st crop of barley at his family farm on the North Dakota border with Canada. Harvest, though a few weeks behind, is just around the corner.

After the grain is malted — when it steeps, germinates and dries — it will end up in beers made by Anheuser-Busch InBev and Constellation Brands, which produces popular labels like Corona, Modelo and Ballast Point.

Lentz recently planted the 121st crop of barley at his family farm on the North Dakota border with Canada. Harvest, though a few weeks behind, is just around the corner.

After the grain is malted — when it steeps, germinates and dries — it will end up in beers made by Anheuser-Busch InBev and Constellation Brands, which produces popular labels like Corona, Modelo and Ballast Point.

Around 90 percent of North Dakota barley production goes toward malting and brewing, said Steven Edwardson, executive administrator of the North Dakota Barley Council. Approximately 95 percent of that is used for brewing, and 1 to 2 percent for distillation of whiskey.

Economists at the USDA’s Economic Research Service show use of barley in three different categories: “food, alcohol and industrial use,” “feed and residual use” and “seed use.” Feed was once the largest market for barley but has all but disappeared in recent years.

In 1986, for example, 319 million bushels — nearly 60 percent of domestic use — fed livestock. Less than 160 million bushels went toward alcohol and food for human consumption.

And while the food-and-alcohol bushel count has remained steady, barley for feed plummeted in recent years, dipping to 7 million bushels in the 2018-2019 market year.

At the same time, there’s been an increase in malt imported from Canada and Europe, driven by overall demand as U.S. barley acres have disappeared, according to Watson at the Brewers Association.

“They don’t grow barley for feed in the U.S. anymore, except out in the West,” said Scott Heisel, vice president and technical director of the American Malting Barley Association. “Feed barley has kind of disappeared.”

After beer is brewed, however, some 90 percent of spent grain generated by craft brewers in particular is disposed of and later used as animal feed, according to the Brewers Association’s estimates.

Contracts keep barley alive
As acres for the crop declined, Heisel said, more of it became contracted to maintain the industry.

Nearly all barley acres in the United States are contracted now, experts say, making them of greater value. What once was an open market for barley is no longer.

“In areas that they grow malting barley, it’s probably one of their better crops as far as income goes,” Heisel said. “Malting barley is a good crop for them to grow.”

For Lentz, barley accounts for some 15 percent of his acres. He also grows spring wheat, canola and soybeans.

“If you would’ve told me 20 years ago that one-third of my farm was going to be soybean,” Lentz said, “I would have laughed at you.”

But many barley growers have stopped planting the crop entirely. Technological advancements have made it possible for barley farmers to grow crops like corn and soybeans instead, so they made the switch.

But despite recent declines in barley throughout the country, production and malting in states that aren’t traditionally known for the crop are on the rise, said North American Craft Maltsters Guild Executive Director Jen Blair.

Ten years ago, for example, neither Connecticut nor Massachusetts produced any barley. As of the most recent agriculture census in 2017, however, farmers in those states harvested a combined 2,344 bushels.

And more breweries are interested in using local ingredients.

“Within North Carolina,” Blair said, “I can think of five breweries who either use 100 percent craft malt or very close.”

For craft maltsters in the guild, half of the grains they use must be grown within 500 miles.

When the Craft Maltsters Guild started in 2013, the organization had just seven members. Now it’s expanded to around 65, which Blair estimates as two-thirds of all the craft maltsters in the country.

The trend aligns with a growing interest in both craft beer itself and where its ingredients come from.

– Never raise your hands to your kids. It leaves your groin unprotected.
– I’m not into working out. My philosophy is no pain, no pain.
– I’m in shape. Round is a shape.
– I’m desperately trying to figure out why Kamikaze pilots wore helmets.
– I’ve always wanted to be somebody, but I should have been more specific.
– Ever notice when you blow in a dog’s face he gets mad at you, but when you take him in a car he sticks his head out the window?
– Ever notice that anyone going slower than you is an idiot, but – anyone going faster is a maniac.