Our GUEST TAP is currently pouring the LIFE’S A PEACH session ale from Saskatoon’s High Key Brewing. This will be followed by the BERRIED ALIVE Raspberry Ale from Longwood Brewery in Nanaimo, BC and then the ELDERFLOWER ALE from Saskatoon’s Paddock Wood Brewery.

The War of The Wheats Beer Tasting event final results scores (out of 50) are as follows:

If you missed this event we still have some bottles of these various brews available in our cooler.

Aug. 24: MOTHERWELL “BARNSTORMER” RED FIFE WITBIER RELEASE. The Bushwakker is pleased to once again be a proud partner with Parks Canada and the Regina Symphony Orchestra this summer and will brew a new Motherwell Homestead commemorative wheat beer! The Motherwell “Barnstormer” Red Fife Witbier incorporates the historic Red Fife wheat as well as some special ingredients which will impart plenty of delicious “barnyard earthy, grassy funk” into the brew! The beer pays tribute to the fact that the massive red barn found on the Motherwell Homestead served as an aviation beacon and was often used as a navigational training tool by Canadian military pilots. Our Barnstormer beer also acknowledges the 100th anniversary of the first flight made to Regina by the famous Roland Groome. He was the first licensed commercial pilot in Canada with the first licensed aircraft and created the first licensed “air harbour,” in what’s now south Regina’s Lakeview area. This special Belgian – style wheat  beer will be officially released at The Symphony Under The Sky event at the Motherwell Homestead national historic site on Saturday, August 24. A limited number of commemorative bottles will be produced and made available. The label will depict an original painting of the big red Motherwell barn with a Curtiss Pusher aircraft which was drawn by Shannon Sambells who is William Motherwell’s great, great granddaughter. Makes a great Saskatchewan keepsake! 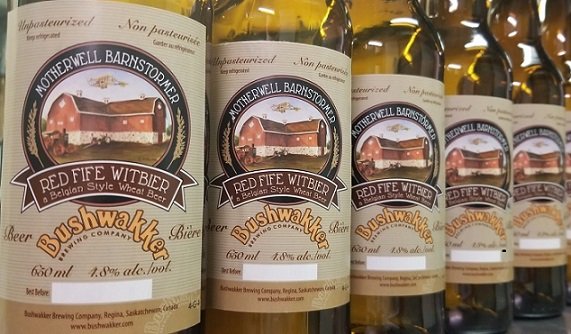 Aug. 31, Sept. 1 & 2: LABOUR DAY LONG WEEKEND RIDER/BOMBER BURGER BATTLE.  We welcome our many Manitoba friends who make their annual pilgrimage to the Bushwakker and Mosaic stadium. This is also the only weekend of the year where you can choose from either our Winnipeg Burger & a Pint feature or our Saskatchewan Burger & a Pint feature. History has shown that the burger which sells the best prior to the game is a strong indicator as to which team will win the Labour Day Classic! May the best burger win!

Sept. 1: THE LABOUR DAY CLASSIC: OPEN AT 11:00 AM. Can Team Green produce yet another Labour Day Classic win this year? Join the Sea of Green at the Bushwakker for our Saskatchewan Burger & a Pint or a Winnipeg Burger & a Pint feature and to discuss the probable outcome before the 1:00 PM kick-off. Meet “Back at the Bush” to conduct your post-game analysis. 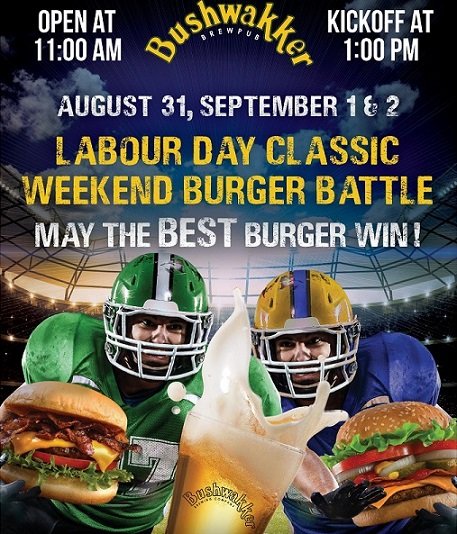 Sept. 4: ALES CLUB MONTHLY MEETING. After a two month summer break, one of North America’s top ranked homebrewing clubs is set to reconvene for another brewing season. The September meeting is historically the largest meeting of the year. This month’s topic will be FRUIT BEER. If you are interested in getting into the art of home brewing or would like to improve your skills, come to the Bushwakker basement clubroom at 8:00 PM and discover what the ALES Club can offer you.

Sept. 6: FIRST FIRKIN FRIDAY – SPECIAL EDITION. We pay tribute to the late JOE FAFARD with the release of a special commemorative brew and limited edition bottle release created in his honour. Joe was a renowned Canadian visual artist, Order of Canada recipient and designer of the Bushwakker/Fafard logo which adorns our t-shirts, beer labels, glassware and is also found on the outside of the building near our front door. After much consultation with Joe’s immediate family, we identified some symbolic ingredients found on his family’s farm which were incorporated into this English Pale Ale. Honey from his wife’s bee hives and hand-picked dandelion leaves near his creek all play a role in this most unusual, yet very balanced and approachable ale. The pomp and circumstance of this longstanding Bushwakker monthly tradition will be altered somewhat this month as an accordion player will pay tribute to Joe’s Métis roots and will lead a small keg (the firkin) of JOE’S FIRKIN SQUIRREL ALE throughout the pub in a procession. A guest volunteer tapper has been selected to attempt to tap the keg in one swift blow! The suds-soaking spectacular takes place at 5:30 PM. The limited edition bottles will be made available after the firkin is tapped.

As part of the recent human resources and salary benchmarking completed by the BA, we also completed our first benchmark of brewery owner and employee diversity, including both gender and race/ethnicity.

Before we delve into the data, it’s worth spending a few minutes discussing why we felt this benchmark was necessary, and why you should have some reasonable level of confidence in the data.

The simplest reason for benchmarking this data is that you can’t measure future change unless you know where you are to start.

The BA has launched new efforts to support and promote diversity in craft brewing, both within individual brewery businesses, as well as in the community of drinkers of small and independent beer. We view this as a set of business resources that brewery owners can choose to use if they see fit, as well as an opportunity to build the market by inviting new customers into the world of small and independent brewing. In order to measure the success of these efforts, we need to know where we are, so that we can put any future changes in context.

There is always danger in self-report surveys, particularly those that aren’t drawn randomly from a population (in this case breweries), so we need to take special care to make sure we didn’t get a “weird” (that’s a highly technical term) sample. For example, if everyone who responded to our survey was from Texas, California, and Florida, they aren’t going to have the same demographics as the country as a whole, or even the same demographics as where American breweries are located.
Although we can’t ever know 100 percent that respondents answered the survey correctly – though they have little to no incentive to lie – we can check the geographic distribution of our sample. We did this in a couple of ways.

Respondents Included from Forty Eight States
First, at a really basic level, we can look at the breakdown of the states where respondents are from. Forty eight states were covered by the survey and the missing states represent less than one percent of breweries nationally.

We can also do more sophisticated tests, such as a correlation coefficient on the percentage of breweries by state in the sample and nationally (r = .9) or a chi-squared test (chi square = 75.1, p = .012).

What these tell us is that we got a survey that looks a lot like the national distribution of breweries, but it isn’t perfect (a lower chi-squared would have been better, for example).

To do this, I used demographic data from the American Community Survey (ACS) from 2017 by zip code tabulation area (ZCTA). The table below shows the race/ethnicity of the sample of respondents, the total U.S., and the locations of U.S. breweries.

The brewery location data is cut two ways: the first is just the demographics of every ZCTA with a brewery in the U.S; the second weights this by the number of breweries in the ZCTA. Why the two approaches? The first is a better indicator of the people who live in the same immediate region as a brewery, whereas the second is a better check against our sample (since we’d expect to be more likely to get a response from a ZCTA with multiple breweries). Again, this is the data of the people who live in these places, not brewery employees.

What does this data show about our sample? I think again I’d summarize it as “good, not perfect.” The percentages are broadly in line with what we’d expect, but our sample is drawn from places that are slightly more white and African American, and slightly less Asian and Hispanic/Latino than if we’d surveyed every U.S. brewery.

A philosophy professor stood before his class of twenty senior students, about to hand out the final exam.
“I want to say that it’s been a pleasure teaching you this semester. I know you’ve all worked extremely hard and many of you are off to graduate school after summer.  So that no one gets their GPA messed up because they might have been celebrating a bit too much this week, anyone who would like to opt out of the final exam today will receive a B for the test.”
There was much rejoicing in the class as students got up, walked to the front of the class, and took the professor up on his offer.  As the last taker left the room, the professor looked out over the handful of remaining students and asked, “Anyone else? This is your last chance.”
One final student rose up and opted out of the final.
The professor closed the door and took attendance of those students remaining. “I’m glad to see you believe in yourselves,” he said. “You all get A’s.”