Our GUEST TAP is currently pouring a CITRUS WIT from Saskatoon’s Paddock Wood brewery. Next up is the MIDSUMMER’S NEIPA DREAM from Saskatoon’s High Key Brewing. This will be followed by the MOUNT PLEASANT NEIPA from Regina’s Malty National Brewing. Then a third NEIPA will be flowing from Swift Current’s Black Bridge Brewery. Try them all to discover your favourite Saskatchewan brewery’s interpretation of the style! 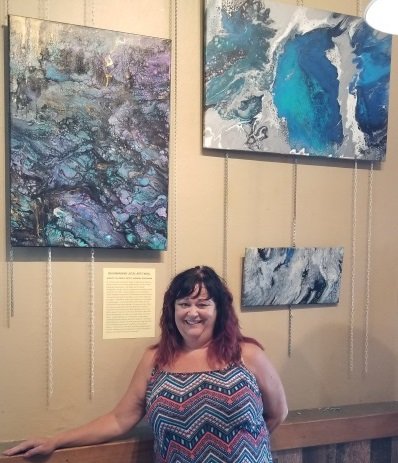 Our BUSHWAKKER LOCAL ARTS WALL featured artist for the month of August is SHAWNA GOODMAN. Her artist biography is as follows:

As a child I always loved my art classes. In high school I spent my spares in the art room finishing assignments for art class. After I graduated I dabbled with a few things, and then found photography. I bought a bunch of equipment and starting to teach myself the craft. When I moved to Regina in my mid-twenties, I joined the Regina Photography Club and learned a whole lot more to become a fairly good photographer. As I got older I longed to paint again. I attended a couple of paint nights and I was hooked on painting again. I started watching YouTube videos and was fascinated with flow acrylic painting. It is messy and a lot of fun! I am never sure exactly what the end results will be. I have to happy with my initial work rather than to gamble to see if I will like the results if I work on it even more.

Sometimes I feel I don’t like the finished results and then in a couple of days I fall in love with it. I love the abstractness of each piece. I enjoy seeing something a little bit different every time I look at it. I love what other people see in a piece. The other really neat thing about flow acrylic paintings is that there is no right way, no top and no bottom. It is totally up to the owner as to how to hang the piece. It can be a new painting just by flipping it. I hope you find the joy and your own hidden meaning in my paintings. 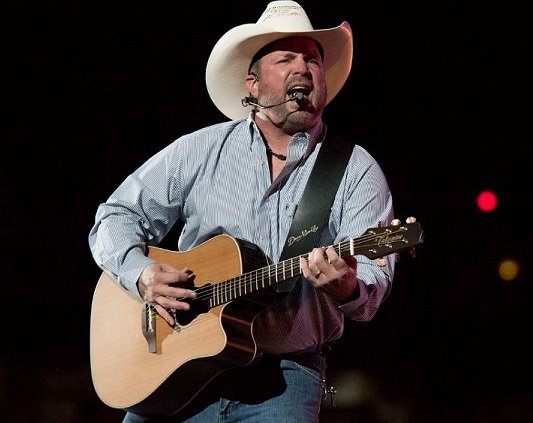 Aug 9 & 10: GARTH BROOKS AT MOSIAC STADIUM. Be sure to enjoy our gourmet BROOKS BURGER & A PINT special all weekend long!

The India Pale Ale is the darling beer style of the United States’ craft beer scene. Even if you personally prefer a sour beer or a craft lager, you can’t argue with the popularity of the IPA.

Let’s present some evidence: In this year’s “Best Beers in America” poll by Zymurgy Magazine, IPA beers made up six of the top 10 “best beers.”

Since 2011, the first Thursday of August has been recognized as IPA Day. Yes, there’s a saison day, stout day, and even barrel-aged beer day, but we guarantee none of those days have grasped Twitter trend status like IPA Day.

IPA also reigns at the Great American Beer Festival (GABF). For more than a decade, American-Style IPA was the most-entered category at the GABF competition, only to be unseated in 2018 by a newly-minted IPA substyle: Juicy or Hazy India Pale Ale (which is still, at heart, an IPA, so it was really only partially unseated, right?!)

GABF Gold Medal IPAs
GABF judges first started judging the IPA category in 1989. Rubicon India Pale Ale from Rubicon Brewing in Sacramento, California, became the first GABF gold medal IPA. In 2017, Hailstorm Brewing beat out 408 other entrants to take gold (Fun fact: 408 entries that year set a record number of entries for IPA at the GABF competition). In 2018, Root Down Brewing’s Bine claimed top honors and is also the brewery from the easternmost state to win gold for IPA.

The biennial World Beer Cup (WBC) also awards the top IPAs. Since the WBC is an international competition, grabbing top honors allows a gold medal-winning brewer to lay claim to brewing the best beer in the world.

Since its inception, the IPA beer style has gained popularity around the world. During the 2020 World Beer Cup in San Antonio, all eyes will be on this most-coveted award, and the competition has never been more fierce.

Gold Medal IPAs from 1989 to 2018
The following list tracks two decades of gold medal IPAs at GABF and WBC competitions. 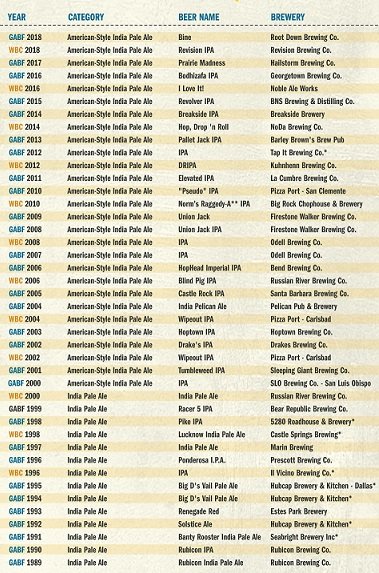 Long Live the IPA
The wide world of craft beer is an abbreviation heavy community, from ABVs and IBUs to ESBs, DDH, and if you can cover this round, I(’ll) O.U. But no three letters have become so well-known as to take on a life of their own more than the abbreviation: IPA.

TIME OUT- Insults, When They Had Class

-“He has all the virtues I dislike and none of the vices I admire.” — Winston Churchill

-“I have never killed a man, but I have read many obituaries with great pleasure” — Clarence Darrow

-“He has never been known to use a word that might send a reader to the dictionary.” — William Faulkner (about Ernest Hemingway)