Our GUEST TAP is currently pouring the SPRUCE LEE West Coast IPA from Regina’s Malty National Brewing. This will be followed by a DOUBLE IPA from Black Bridge Brewery. 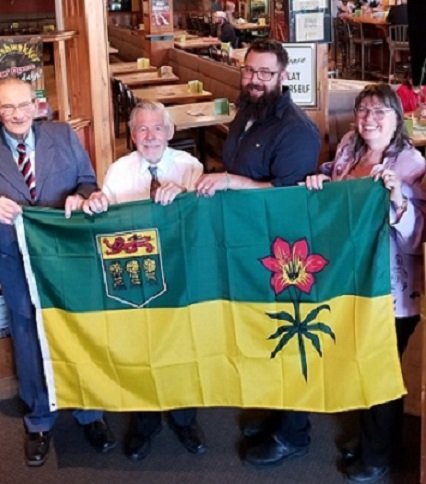 It was a great honour to have our province’s flag designer visit us at The Bushwakker! From left to right we had Percy Schmeiser (sat on the committee who chose the design in 1969), Anthony Drake (winning Saskatchewan flag designer), Josh Miller (2019 Masterchef Canada top three finalist and huge Bushwakker cheesecake fan) and Gail Hapanowicz (director of the Home of the Saskatchewan Flag Foundation) join us for a mid-afternoon lunch last Friday. Such a thrill to have these Saskatchewan history makers with us to celebrate our flag’s 50th anniversary in our VERY Saskatchewan brewpub!

Aug. 2: FIRST FIRKIN FRIDAY. Enjoy the pomp and circumstance of this longstanding Bushwakker monthly tradition! A piper from The Regina Police Services Pipes & Drums leads a small keg (the firkin) of special FRUIT WHEAT throughout the pub in a procession. A guest volunteer tapper is selected to wield the handmade wooden maul affectionately named, The Mighty Firkin Wakker, and attempt to tap the keg in one swift blow! The suds-soaking spectacular takes place at 5:30 PM.

Aug. 3: FOOD DAY CANADA 2019. We will once again participate in this national celebration of our local bounty. It is an opportunity for Canadian chefs to showcase their skills by creating delicious dishes utilizing fresh ingredients which are locally sourced. Bushwakker executive chef, Mike Monette, will offer a dish which he feels will resonate with his brewpub customers. 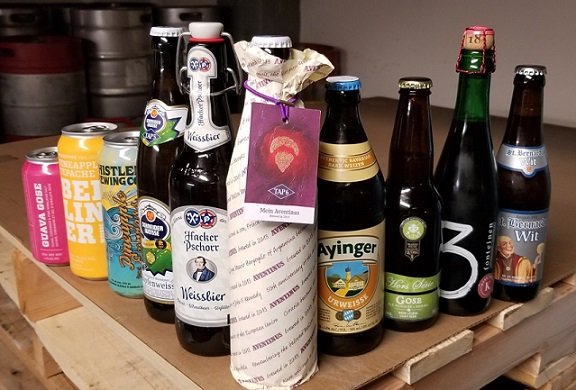 Aug 9 & 10: GARTH BROOKS AT MOSIAC STADIUM. Be sure to enjoy our gourmet BROOKS BURGER & A PINT concert day special!

How is craft doing so far in 2019? We won’t know definitively until we compile the full results from our midyear survey but we can get some early clues by looking at scan data.

As always, remember the main caveats about scan data: off-premise is only about 60 percent of craft volume (the rest being on-premise and at-the-brewery sales), scan pulls from larger channels and so may miss patterns in smaller independent stores or trends from the smallest brewers, and the coverage varies geographically. With that said, it has generally pointed in the same direction as overall craft (albeit at slower growth levels in recent years), and is a rich data source that we can analyze.

In this post, unless otherwise specified, all data is for craft brewers (as defined by the Brewers Association) from IRI Group’s broadest scan channel – multi-outlet plus convenience – for the total United States.

So 2019 is looking fairly similar, if not slightly stronger than 2018 in the first half. We’ll have to wait and see what our survey shows and what on and off-premise look like, but so far it’s looking like another year of mid-single digit growth.

Breaking Down Growth by Brand
Breaking apart the numbers at the brand level, a couple of familiar patterns emerge. I’ll highlight three below:

1. Without new brands, craft isn’t growing
New brands amount to 4.5 percent of the total 2019 first half volume, and without their contributions, craft would be down 2.8 percent (or 2.5 percent if you just look at the existing brands). What does this tell us? New still sells in the marketplace.

2. Smaller brands are growing the fastest
It won’t be a shock to anyone that smaller, local brands are out-performing the total craft category at the moment. Brands that sold 1,001 cases or more in 2018 are collectively down in 2019. That’s a shocking statement and shows how hard it is to build or even maintain volume on brands with any scale in 2019’s competitive environment.

Things improve a bit if we add in new brands. Most of the new volume is coming from brands that have some decent scale (1,001 to a million case equivalents sold so far in 2019). This suggests that regional craft brewers have opportunities to introduce new brands, which they increasingly need to do to offset existing brands. If you throw these in with the 2018 size buckets, brands below 100,000 CE’s are still growing, but anything above that point is still in the red

3. More brands are shrinking than growing
I’ve shown brand-by-brand growth rates before, and as usual the numbers aren’t super pretty. There are a wide range of outcomes in the marketplace right now, but when you look at them all together, more are on the negative side of the distribution than the positive side. The median growth rate of an existing individual craft brand right now is -27 percent. If you add in the new brands as 100 percent growth, the median “improves” to -14 percent.

What does that tell me? That it’s really hard in distribution right now, and while there can be growth in introducing new brands into the marketplace, sustaining that growth and those brands is going to be very tough, even as soon as a brand’s second year.

All other styles are down -3.6 percent. Some of this is because people are slapping the IPA label on beers that are actually somewhat tangential to the category, and some of it comes from the IPA growth in the vague “Other IPA” micro style category. Hazy or juicy IPAs have clearly leveled up both American and Imperial IPA growth, and those are the two strongest growth style categories in the data, with “Other IPA” as fourth. Not all IPA categories grew, and the darling of a few years ago, Fruit IPA, was down in the first half of the year. But let’s be honest, the lines between IPA categories are getting hazier, as many of the new “Other IPA” entrants have fruit in them. In addition, “Fruit Specialty” grew pretty strongly in the first half of the year (weighing in at ninth strongest absolute growth for a micro style), so we may also just be seeing some Fruit IPAs drop from the IPA category.

As with last year, the second broad category of growth covers a set of lighter styles: American lager, blonde ale, pilsner, sour ale, and cream ale are five of the top 11 growth styles. I don’t want to overstate their growth – collectively they grew the same amount as Imperial IPA and Other IPA, and about one-third as much as American IPA. However, we’re seeing lots of growing interest in consumer trends around both low calorie and “crisp” flavors, so these styles may be poised for more, although I wouldn’t count out low-cal IPAs as a competitor.

What Scan Data Indicates in ABV
Given the percolating interest in health and wellness, you might think that broadly low ABV beers would be growing a lot in the marketplace – but that’s really not the case from this data. I took all of the style categories and assigned them an ABV. Yes, there are low ABV styles and brands that are doing well in the marketplace. But when you look at the group collectively, that growth disappears. In addition, beers with an ABV of more than seven percent are growing the fastest in percentage terms. This isn’t just imperial IPA. Barrel-aged, tripels, and imperial versions of other styles are also showing growth.

The consumer data on ABV is split. Yes, some percentage of consumers want lower ABV, but a big chunk are clearly still looking for flavor and higher ABV. In addition, the low-cal, low ABV category has a new behemoth this year in seltzers, pulling calorie- and carb-conscious consumers away from beer altogether. There are going to be some craft consumers where low ABV, low-cal (which generally correlates with low ABV), and even non-alcoholic is important.

That said, I think there’s ample evidence that just lowering the ABV isn’t really going to resonate with craft consumers, who generally come to the category wanting something more. Ninety six percent of craft respondents said that “flavor” was important when choosing a craft beer to purchase. So as ABV enters into the conversation more, for craft, it’s going to be a balance with other functional attributes, such as flavor. Brewers shouldn’t lose the key attributes of why people drink craft in the first place just to chase ABV trends. Unlock both – flavor and the new health attributes that younger legal drinking age consumers appear to be looking for – and we may see more craft success in this space.

Craft Drinkers Demand New and More
I’ve used variations on this line a lot over the past year, but I think my closing statement would be something like the following: demand for the craft category as a whole is healthy and growing, but that increasingly has little relation to the health or success of individual brands. The fracturing of the marketplace with so many players has created a hyper-competitive marketplace, where new and small have a chance, and everyone else is struggling just to tread water. I’d expect the onsite sales numbers to come back much stronger, and those can be an offsetting balance for some breweries due to their higher margins, but that’s cold comfort to companies that rely primarily on distribution.

In terms of styles and what’s growing, craft drinkers continue to demand more. More hops, more functionality in terms of flavor at the right ABV point for that occasion, and still more variety. Brewers that don’t just chase trends but incorporate the ever evolving consumer into what they do well will have the best shot at maintaining growth in a cluttered market.

A blind man was describing his favorite sport, parachuting. When asked how this was accomplished, he said that things were all done for him:
“I am placed in the door and told when to jump”
“My hand is placed on my release ring for me, and out I go”
“But how do you know when you are going to land?” he was asked.
“I have a very keen sense of smell and I can smell the trees and grass when I am 300 feet from the ground” he answered.
“But how do you know when to lift your legs for the final arrival on the ground?” he was again asked.
He quickly answered “Oh, the dog’s leash goes slack”