Our GUEST TAP is currently pouring the GIN & LIME PILS from Richmond, BC’s Fuggles and Warlock Craftworks brewery. Next up is the LET’S GOSE TO THE PEACH fruit gose from Saskatoon’s High Key Brewing. 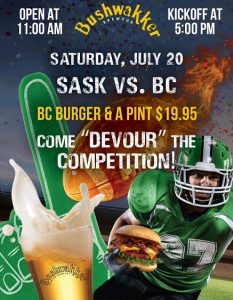 Aug. 2: FIRST FIRKIN FRIDAY. Enjoy the pomp and circumstance of this longstanding Bushwakker monthly tradition! A piper from The Regina Police Services Pipes & Drums leads a small keg (the firkin) of special ale throughout the pub in a procession. A guest volunteer tapper is selected to wield the handmade wooden maul affectionately named, The Mighty Firkin Wakker, and attempt to tap the keg in one swift blow! The suds-soaking spectacular takes place at 5:30 PM.

Aug. 3: FOOD DAY CANADA 2019. The Bushwakker will once again be participating in this national celebration of our local bounty. It is an opportunity for Canadian chefs to showcase their skills by creating delicious dishes utilizing fresh ingredients which are locally sourced. Bushwakker executive chef, Mike Monette, will offer a dish which he feels will resonate with his brewpub customers. 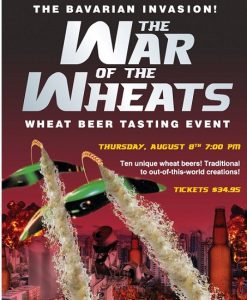 Aug. 24: MOTHERWELL “BARNSTORMER” RED FIFE WITBIER RELEASE. The Bushwakker is pleased to once again be a proud partner with Parks Canada and the Regina Symphony Orchestra this summer and will brew a new Motherwell Homestead commemorative wheat beer! The Motherwell “Barnstormer” Red Fife Witbier incorporates the historic Red Fife wheat as well as special ingredients which will impart plenty of delicious “barnyard earthy, grassy funk” into the brew!
Aug. 26: Monday Night Jazz & Blues. CALL ME MILDY pumps out melodic blues rock with a dash of reggae. 8:00 PM.

Dunkel Weissbier
Modern craft beer enthusiasts who focus on extreme beers and the latest trends may dismiss classic German-style wheat beers, known as weissbier or weizen, as boring and passé, but one visit to a picturesque Munich biergarten in the springtime to sip a cloudy, spicy, exquisite weissbier from a tall, traditional wheat beer glass will put an end to such iniquitous thoughts.

German wheat beers employ ancient strains of top-fermenting ale yeasts that work best at temperatures around 65 to 72 degrees Fahrenheit. These microbes produce spicy, clove, vanilla, and nutmeg flavor and aroma nuances that were probably found in many ales in the Bavarian region in the middle ages. Until the mid-1800s, German wheat beers were brewed in limited quantities by monks and royal nobility and did not make up a substantial quantity of the daily beer intake of the region.

The  current popularity of  Bavarian  wheat beers can be traced back to Georg Schneider, who opened a Munich weissbier brewery in the 1850s, then expanded  production  to  a  facility  in  nearby  Kelheim in 1872. Surrounded by the rural Hallertau hop growing region, the Kelheim brewery survived the bombs of World War II to supply Schneider Weisse to a new generation of thirsty post-war citizens. The fame of the somewhat dark and “old school” weissbier of Schneider led many Bavarian breweries to start production of weissbiers with more golden hues during the last half of the 20th Century.

Once weissbiers solidified their place in Bavarian beer culture, brewers began to experiment once again with wheat beer recipes made with darker malts as in the early days of weissbiers. These Dunkel Weissbiers contained all the refreshing complexity of golden weissbiers but offered more of a brown color along with a multi-faceted, rich malt profile of toasted bread crust and caramel.

Malted wheat usually makes up 50 to 70 percent of the grain bill of a typical Dunkel Weissbier, with Munich, Vienna, pilsner and dark wheat making up what’s left. Many think of the rich complexity of a Dunkel Weissbier as providing the refreshing fermentation character of a weissbier along with the dark malt complexity of a Munich dunkel lager. Weissbier “hefe” versions are unfiltered, with yeast sediment in the bottle that is often stirred up and poured with the beer.

Bubblegum notes should be restrained, along with any traces of spicy or floral hop fragrance and flavor. Clove-like fermentation compounds, bready wheat character and caramel-like malt complexity should be focal points of this style – all backed by a medium-light mouthfeel and spritzy effervescence.

A man enters a barbershop for a shave. While the barber is foaming him up, he mentions the problems he has getting a close shave around the cheeks.

“I have just the thing,” says the barber taking a small wooden ball from a drawer. “Just place this between your cheek and gum.”

The client places the ball in his mouth and the barber proceeds with the closest shave the man has ever experienced. After a few strokes, the client asks in garbled speech, “And what if I swallow it?”

“No problem,” says the barber. “Just bring it back tomorrow like everyone else does.”