Our GUEST TAP is currently pouring a small keg of POMEGRANTE PALE ALE from Saskatoon’s High Key Brewing. This will be followed by a GIN & LIME PILS from Richmond, BC’s Fuggles and Warlock Craftworks brewery. 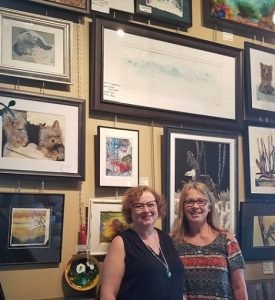 The Bushwakker LOCAL ARTIST WALL for the month of July features the works of KATHY HANCOCK and KELLIE FOX. Kathy Hancock is a Regina watercolour and multimedia artist who likes to hug trees and big rocks. She is grounded and energized by nature. She loves and is inspired by the painting styles and artworks of Emily Carr, Monet and Lisa Riehl, B.C. Kathy is a member of the Aurora Artist Guild, MacKenzie Art Gallery, Art Gallery of Regina and the Regina Senior Centre Watercolor Group.

Kellie Fox was born in Windsor, Ontario. Her family relocated a few times before eventually settling in Regina. Throughout school, Kellie loved art. During high school, Kellie’s teacher encouraged her to pursue an art career. However, life took over and she got busy raising her children. In 2016, she went for a vacation in northern Ontario and while there participated in an alcohol ink tile art class. Since then Kellie’s love of this medium has blossomed from tiles to metals to Yupo paper painting. Enjoy their vibrant works all this month! 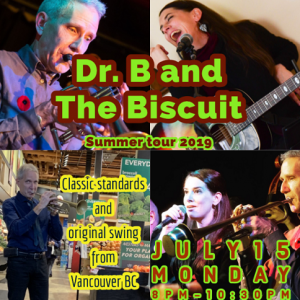 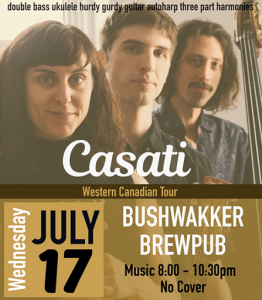 The Rise of Rosé Beers

Rosé isn’t just brunching gossip fuel. The once ignored blush beverage, known for its light, flowery and fruity qualities, is now a staple at most restaurants. It was only a matter of time before rosé found its way into a beer can. Over the past year, rosé-inspired brews have been tapped in breweries across the country like some out-of-hand gender reveal. But for good reason-the qualities of rosé wine blended with beer’s effervescence appeal to many and make for suitable summer swill.
Incorporating wine flavors into beer is nothing new. Trailblazers in the field, Firestone Walker, launched their operation in California’s Central Coast wine country in Paso Robles. Their proximity to grape vines and the brewers’ winemaking history inevitably inspired their brewing process. Firestone’s 1996 debut, the Double Barrel Ale (DBA), was aged in chardonnay oak barrels. At the time, they were one of the few using the technique.

“Now you would be hard-pressed to find a brewery that doesn’t utilize barrel-aging,” said Firestone Walker Brewmaster Matt Brynildson.

Adding years of unique flavors and aromas into beer through old wine—or spirit—barrels is a magnetic draw for craft brewers. What started as experimental has become standard, so it’s unsurprising that rosé joined the party.

Last summer, New York’s famed Brewery Ommegang released Saison Rosé, a vivacious blend of an oak barrel-aged saison mixed with a hibiscus saison co-fermented with chardonnay grape juice. Victory Brewing Co. out of Pennsylvania will soon release Rosé Monkey made with their famous Golden Monkey Belgian-style beer aged in chardonnay oak barrels and finished with cherries. Even Shiner, in collaboration with Kiepersol Vineyards out of Tyler, Texas, released a Rose Palé Ale made with fermented grape must and aged in white wine oak barrels.

Not all rosé-inspired suds are aged in wine barrels, though. In January, Firestone released Rosalie, a beer-wine hybrid co-fermented with chardonnay and other aromatic grape varietals. (Rosé wine is tinted by the skins of red grapes.)

Brynildson said working with grape juice on a large scale has its challenges. Grapes are harvested in one month and the juice has to be stored year-round. Firestone harvested 180 tons of white wine grapes from their neighbor in Paso Robles, Castoro Winery. There are very little sulfur additions, which is typical in a winery. The juice was chilled and cross-flow filtered at the winery. The juice is stored in near-freezing temperatures at the brewery until they are ready to use it. They’ve utilized about half so far. Brynildson said he is constantly tasting grape juice. A major difference between the wine and beer is the alcohol percentage: Rosalie weighs in at 5 percent, while rosé wines are around 10 to 14 percent.

Hibiscus is also a key ingredient Rosalie. The flower is a common addition in rosé brews because it adds a floral characteristic that is common in rosé wines. Brynildson said the flower’s citric acid contributes a wine-like acidity to beer and creates the signature hue. The vibrant visual undoubtedly adds to the drink’s appeal.

“Back when I went to brewing school, we were told early on that people drink with their eyes first and foremost,” Brynildson said. He added that people will judge a beer by its clarity—this was before the haze craze—foam and color before they taste it.

TIME OUT- Life on the Farm

Farmer John lived on a quiet rural highway. But, as time went by, the traffic slowly built up at an alarming rate. The traffic was so heavy and so fast that his chickens were being run over at a rate of three to six a day.

So one day Farmer John called the sheriff’s office and said, “You’ve got to do something about all of these people driving so fast and killing all of my chickens.”
“What do you want me to do?” asked the sheriff.

“I don’t care, just do something about those crazy drivers!” So the next day he had the county workers go out and erected a sign that said: SLOW–SCHOOL CROSSING

Three days later Farmer John called the sheriff and said, “You’ve got to do something about these drivers. The ‘school crossing’ sign seems to make them go even faster.”

So, again, the sheriff sends out the county workers and they put up a new sign: SLOW: CHILDREN AT PLAY

That really sped them up. So Farmer John called and called and called every day for three weeks. Finally, he asked the sheriff, “Your signs are doing no good. Can I put up my own sign?” The sheriff told him, “Sure thing, put up your own sign.” He was going to let the Farmer John do just about anything in order to get him to stop calling everyday to complain.

The sheriff got no more calls from Farmer John. Three weeks later, curiosity got the best of the sheriff and he decided to give Farmer John a call. “Did you put up your sign?”

“Oh, I sure did. And not one chicken has been killed since then. I’ve got to go. I’m very busy.” He hung up the phone.

The sheriff was really curious now and he thought to himself, “I’d better go out there and take a look at that sign… it might be something that WE could use to slow down drivers…” So the sheriff drove out to Farmer John’s house, and his jaw dropped the moment he saw the sign. It was spray-painted on a sheet of wood:

NUDIST COLONY – GO SLOW AND WATCH OUT FOR THE CHICKS!