Our GUEST TAP is pouring a small keg of CIDER & BLACK apple and black currant cider from Saskatoon’s Crossmount Cidery. Next up is the RHUBARB CRUMBLE GOSE from High Key Brewing. This will be followed by CACTUS JOOSE New England IPA from Regina’s Malty National Brewing.

June 30: CYCLONE BARLEYWINE RELEASE:  On June 30, 1912, the infamous Regina Cyclone tore through the heart of the Queen City and destroyed the original building where The Bushwakker now stands. 107 years later to the exact day, we pay tribute to this incredible force of nature with the release of one of our strongest ales. Our Cyclone Barleywine is an English-style barleywine which packs a big malty punch with plenty of alcohol warmth and complexity. Limited bottles available. See you at noon on Sunday! 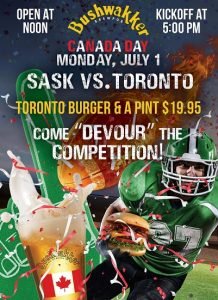 July 1: Open from Noon to Nine on Canada Day! SASK VS. TORONTO. Our beloved Saskatchewan Roughriders play host to the Toronto Argonauts at 5:00 PM for a special Canada Day contest at Mosaic Stadium. Be sure to enjoy our gourmet TORONTO BURGER & A PINT SPECIAL and discover for yourself why we were recently voted as the best place in Regina for local burgers and local fries! Come down and “devour” the competition! 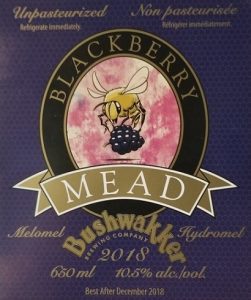 July 5: SASKATCHEWAN SUMMER TOURIST BLACKBERRY MEAD RELEASE. We see hundreds of tourists come through our doors every summer and many of them are looking for our famous Blackberry Mead Christmas specialty melomel. For the first time in our 28 year history, we will make available approximately 100 bottles which will be sold individually. How long will they last? We have no idea! See you at 5:30 PM. 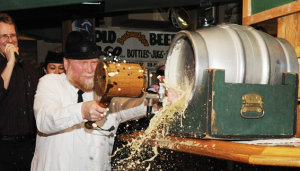 July 5: FIRST FIRKIN FRIDAY. To acknowledge today’s summer tourism release of a limited number of Bushwakker Blackberry Mead bottles, we will present a never-before-attempted firkin offering. Our MANGO MEAD is a braggot which blends both our famous Blackberry Mead with our new Mango Blonde Ale to create one incredible fruity summer experience. This once-in-a-lifetime firkin will be piped out by a member of the Regina Police Services Pipes & Drums and tapped at 5:30. Plan to arrive early in order to get a good seat!

July 6: SASK VS. CALGARY. The Riders will be looking for redemption after the pre-season thumping they received from the Stampeders. Help fuel their fire by “devouring” the competition with our gourmet CALGARY BURGER & A PINT SPECIAL for only $19.95! Kickoff is at 8:00 PM.

A famed painter on television made a career touting, “We don’t make mistakes, just happy little accidents.” The origin of smoked beers has been recorded as an accident, but it took several hundred years before the style, and resulting beers, made most beer drinkers happy. As smoked beer styles advanced it did not take long to realize their compatibility with other smoked goods – specifically barbecue.

Smoked beers, known originally as Rauchbier (German for “smoked beer”), started in Bamberg, Franconia, Germany in the early 15th century. Two breweries there, Schlenkerla and Spezial, were founded in 1405 and 1536, respectively. Today these two breweries still exist and produce Rauchbier in the old way: drying malt over an open fire.

Unlike the Sumerians and ancient Egyptians who lived in arid places where drying could be done via the sun, in Bamberg brewers needed to create a heat source, hence making fire. Early materials used for drying malted barley included straw, a variety of woods and even coal. As wood became scarce in 16th century Europe, burning straw became the norm, as coal was heavily taxed (and incredibly impure). Beechwood was always used and is still the preferred wood today, with both aforementioned Bamberg breweries using it exclusively for their malting process. For drying their barley, these breweries will smoke the grains for 18-2 In those early days of fire-drying, and along with the problems of inconsistency of sourcing materials and unpredictability of temperature control, Daniel Wheeler came along to change the game entirely.  He invented an innovative device for kilning offered brewers a way to remove smoke from heat, as well as moisture from malted barley. Nearly anything could be used as a fuel source and the temperature could be controlled. Why would anyone want smoked beers anymore?

Overall Impression: A smoke-enhanced beer showing good balance between the smoke and beer character, while remaining pleasant to drink. Balance in the use of smoke, hops and malt character is exhibited by the better examples.

A Specialty Smoked Beer is either a smoked beer based on something other than a Classic Style, or any type of smoked beer with additional ingredients (fruits, vegetables, spices) or processes employed that transform the beer into something more unique.

Overall Impression: A smoke-enhanced beer showing good balance between the smoke, the beer character, and the added ingredients, while remaining pleasant to drink. Balance in the use of smoke, hops and malt character is exhibited by the better examples.

To understand how smoked beers might work with smoked meats, we turn to Beer Pairing: The Essential Guide from the Pairing Pros by Julia Herz and Gwen Conley. In this excellent read the authors state, “While you might get lucky searching for contrasting taste elements, it’s much easier to search for places where beer and food flavors will work together, the intersections where they complement each other.” Further along in the book the authors note, “For pairing beer and food, the goal is almost always to have the overall beer and food intensities match. You don’t want any one element to barrel over all the others.”

There are two things here that favor pairing smoked beers with smoked meat. First, it’s often easier to pair complementary flavors, not just with the smoke aromas and taste, but with attention to the maltiness present in many prominent smoked beers, especially in the traditional smoked Märzen lager, and some of the richer barbecue cuts and sauces.

Secondly, barbecue can vary in intensity, depending on the type and cut of meat, dry rub used (if any), length of time it was smoked and which woods were used (Mesquite, for example, burns hot and fast, and produces a lot of smoke and a strong flavor. Oak, on the other hand, burns slow and even and has a mild flavor).

The variety of smoked beers available today also vary in their intensity. Some beers only contain about 10 percent smoked grains in their mash bill while others may have up to 100 percent.

For this guide it will be helpful to cover the four major regional styles of barbecue. They are generally accepted as:

Kansas City: Kansas City style is characterized by a wide variety in meat, particularly including beef, pork, and lamb, and is rubbed with spices, slow-smoked over a variety of woods and served with a thick tomato-based barbecue sauce.

Memphis: Memphis barbecue is primarily two different dishes: ribs, which come “wet” and “dry”, and barbecue sandwiches. Wet ribs come with sauce that’s been added while still smoking and dry is when only a dry rub seasoning has been applied.

In church one Sunday morning, a preacher said, “Anyone with special needs who wants to be prayed over, please come forward to the front by the altar.”

With that, Leroy got in line, and when it was his turn, the Preacher asked, “Leroy, what do you want me to pray about for you?”

Leroy replied, “Preacher, I need you to pray for help with my hearing.”

He prayed a “blue streak” for Leroy, and the whole congregation joined in with great enthusiasm.

After a few minutes, the preacher removed his hands, stood back and asked, “Leroy, how is your hearing?”

Leroy answered, “I don’t know. It ain’t ’til Thursday.”