Our May Premium Wine Features are from New Zealand. The white is a Sauvignon Blanc from the Riverlore Winery and the red is a Pinot Noir from the Matua Winery. 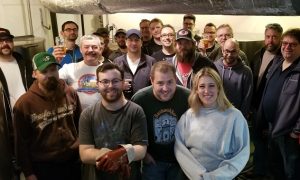 One of the biggest editions of BIG BREW DAY in Bushwakker history took place last Saturday! The ALES Club and The Bushwakker continue the longstanding tradition of celebrating craft beer at the grassroots level. Members of the club joined the Bushwakker brewing team in creating a massive Belgian Quadrupel!

May 17- 20: MAY LONG WEEKEND KEG EVENT. What better way to celebrate the year’s first warm long weekend than with a Bushwakker keg? Receive free ice, cups, coasters and the use of a keg chiller tub with any May long weekend keg order. Four sizes of kegs are available for any gathering big or small.

May 18: ANNUAL SCREAMIN’ MOSQUITO CHILI BEER RELEASE. Our hot pepper-infused blonde ale makes its annual return this weekend. We have partnered with local businessman Tony Matharu at the India Food Centre in Regina to provide us with fresh spicy peppers. Hurts so good! 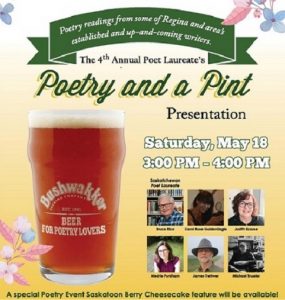 May 18: THE POET LAUREATE’S 4TH ANNUAL POETRY & A PINT PRESENTATION. The Saskatchewan Poet Laureate Program was the first provincial program of its kind in Canada. The Saskatchewan Arts Board, partners in the program, which is under the patronage of the Lieutenant Governor. Enjoy a Saturday afternoon of poetry readings from some of Regina and area’s established and up-and-coming writers including: Bruce Rice (Poet Laureate of Saskatchewan), Carol Rose GoldenEagle, Judith Krause, Medrie Purdham, James Trettwer and Michael Trussler. Perhaps enjoy a slice of our special limited edition Saskatoon Berry Cheesecake Poetry Dessert! 3:00 PM.

May 20: Open from noon to nine on Victoria Day.

May 29: Wednesday Night Folk. THE RED WAGON GYPSIES. Acapella/ acoustic harmonies from Angela Ell and Tamara Scrimbit. It doesn’t get “folkier” than this! 8:00 PM.

June 6: SASK VS. WINNIPEG. The first and only 2019 season home exhibition game will see Team Green play host to the Bombers. Kickoff is at 7:00 PM. Enjoy our WINNIPEG BURGER & A PINT game day feature. Think of it as “devouring” the competition!

When I paid a visit to Dogfish Head Craft Brewery in early 2016, one of the questions I asked founder Sam Calagione was why so many of his beer peers were selling out to large conglomerates like Anheuser-Busch InBev and Molson Coors. His response: “It was inevitable.”

“The patriarchs and matriarchs of our [craft] movement are coming to retirement age,” said Calagione, as we stood in his brewery in Milton, Delaware. “I don’t fault those that are choosing to sell the majority or all of their company.” Calagione had sold a 15% stake in his company to private equity firm LNK Partners in 2015 to bring more business acumen to Dogfish, but told me that he was holding out on a full sale so his children—then aged 13 and 16—could one day potentially run the business he and his wife Mariah built.

Inevitability came earlier than Calagione anticipated. On Thursday, Dogfish Head announced it would merge with Sam Adams brewer Boston Beer Company in a $300 million cash-and-stock transaction, combining two of the nation’s top 15 brewers to better take on competition from Big Beer and a crowded craft beer landscape that’s put pressure on the smaller players’ sales. Calagione has agreed to take a seat on Boston Beer’s board of directors.

“Together, we’ll be better positioned to compete with larger international beer conglomerates that are more than 50x our size, despite our combined company’s volume representing less than 2% of the beer sold in the U.S.,” wrote Calagione in a blog post announcing the deal. Calagione wasn’t immediately available for an interview with Fortune.

The deal comes at a time when craft brewers have faced tough growing pains. Craft beer sales only grew by 3.9% in volume in 2018, according to the Brewers Association, capturing just 13.2% of the total $114 billion beer market. There had once been aspirations that craft beer would make up 20% of the market by 2020, but a number of factors have led to a slowdown. Consumers are drinking less beer, replacing it with more spirits and wine. They are discovering a number of alternatives like cannabis drinks, “hard” alcoholic versions of soda and seltzer, and even nonalcoholic drinks.

The industry was also hurt by takeovers by AB InBev, Molson Coors, Constellation Brands, and Heineken—the “Big Four” that dominate the beer aisle. Every time a Lagunitas, or a Goose Island, or a Ballast Point was acquired, it removed their volume from the beers that the Brewers Association deemed “craft.” Craft brewers also started to merge to better compete.

The Dogfish Head-Boston Beer marriage seems to come from a place of mutual respect. Both of the founders—Calagione and Boston Beer’s Jim Koch—have separately spoken highly of each other to me during past interviews. Each was part of the earlier waves of the craft beer movement: Boston Beer started in 1984 and  Dogfish Head debuted  in 1995.

But both are facing pressure as they face a squeeze from Big Beer and smaller, niche craft brewers that generate greater buzz with drinkers today. Boston Beer’s Sam Adams brand last posted annual growth in 2014—putting pressure on the company’s overall sales, which have had to depend on non-beer brands for growth. In 2018, depletions— or distributor sales to retailers—climbed about 13% from the prior year thanks to increases for Truly Hard Seltzer, Angry Orchard cider, and Twisted Tea. But the Sam Adams brand declined again.

Dogfish Head has also been stuck of late. It became a top 20-selling craft brewer as of 2009, according to the Brewers Association’s annual statistics ranking breweries by volume. But it has muddled between 16th and 11th ever since—ranking 13th in 2018. (Boston Beer was #2.)

A deal between the two will help them combine forces as it pertains to marketing, purchasing of ingredients, bottles, labeling, and other input costs, while also giving the combined company heft to better negotiate with wholesale distributors, who sell beer to retailers.

One interesting aspect of the deal is that it combines two brewers that are regionally strongest in the northeast near their home bases: Boston Beer from Massachusetts and Dogfish Head from Delaware. That differs from the regionally diverse acquisition strategy pursued by the likes of AB InBev and Molson Coors, who have bought craft brewers from all across the United States. It remains to be seen if that will be beneficial or a hinderance.

“This combination is the right fit as both Boston Beer and Dogfish Head have a passion for brewing and innovation, we share the same values and we will learn a lot from each other as we continue to invest in the high-end beer category,” said Koch in a statement on Thursday.

So perhaps, this deal isn’t entirely strategic. There’s an emotional element at play when two craft founders realize the landscape has changed so drastically they need to make a bold move before being gulped up by that Big Beer boogeyman.

I went to the shop the other day. I was only in there for about 5 minutes and when I came out, there was a traffic officer writing a parking ticket for over-running the meter. So I went up to him and said, “Come on, how about giving a man a break?” He ignored me and continued writing the ticket. So I called him a pencil-necked jerk. He glared at me and started writing another ticket for also having parked partially on the pavement!  So I called him a son of a mutant pig. He finished the second ticket and put it on the car with the first. Then he started writing a third ticket! This went on for about 20 minutes and the more I abused him, the more tickets he wrote. I didn’t give a damn. My car was parked around the corner.