Our GUEST TAP is pouring the Neapolitan Milk Stout from Regina’s Malty National Brewing. Next up is their Star Crossed Starfuit and Peach Kettle Sour. This will be followed by a Citra Dry Hopped Cider from Crossmount Cider in Saskatoon. 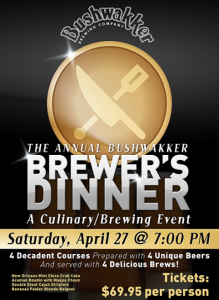 TIME IS RUNNING OUT! Tickets to the April 27th BUSHWAKKER BREWER’S DINNER are now over 85% sold! Don’t miss out on the signature event of the Bushwakker Brewpub. A four-course meal in which each dish utilizes a unique beer as an ingredient and is paired with a unique beer to enhance the flavours of the food.  This year’s fun and festive dinner theme will be MARDI GRAS! This is one of Chef Mike’s favourite culinary styles. Tickets only $69.95 each. Decadent beer cuisine awaits! 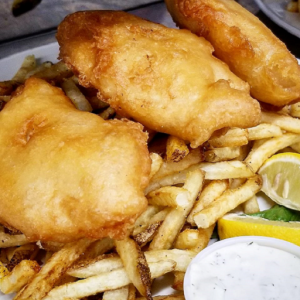 Apr. 19: Open at noon on Good Friday. This is our biggest day of the year for fish dish sales! In addition to our extremely popular STUBBLEJUMPER PILS beer battered Fish & Chips we will also offer a Grilled Salmon Ciabatta sandwich and Halibut & Chips too. Will be a grand Good Friday Fish Feeding Frenzy!

Apr. 27: ANNUAL BUSHWAKKER BREWER’S DINNER. The signature event of The Bushwakker Brewpub! A four-course meal in which each dish utilizes a unique beer as an ingredient and is paired with a unique half pint of beer  to enhance the flavours of the food.  This year’s fun and festive dinner theme will be MARDI GRAS! This is one of Chef Mike’s favourite culinary styles. Tickets only $69.95 each. Don’t delay. This event sold out last year.

The Truth About Brewing Beer with Corn Syrup

All the hubbub surrounding this controversy revolves around the fact that AB InBev differentiates Bud Light by not using corn syrup, which implies that corn syrup is in some way a negative ingredient in beer.

What Are the Facts Behind this Controversy?
Now that it’s in the news, it is a good time to discuss what corn syrup actually is to get a better understanding of why it is a commonly used ingredient in the brewing process, particularly when brewing American Light Lagers (Category 1A in the 2015 BJCP Style Guidelines).

There are a multitude of beer styles currently recognized by the Beer Judge Certification Program as well as by the Brewers Association, with new styles continually being recognized due to the creative nature of brewers. Regardless of the style, beer is made through fermentation by yeast (and/or certain bacteria in certain styles). Fermentation is simply the process in which yeast (or bacteria) grow and multiply by utilizing sugar and nutrients in the fermentation broth (or wort) with byproducts of this process being typically alcohol and carbon dioxide. Among those styles is the Standard American Beer style family, and a subcategory of that family is American Light Lager. Bud Light, Miller Lite and Coors Light all fit within that subcategory. American Light Lager is, as the name suggests, a beer that is subtle in most respects – low in flavor, aroma and, in particular, quite light in body – delivering a light, refreshing and thirst-quenching brew.

A typical wort is traditionally composed of sugars (glucose, maltose and potentially others, all derived from processing the starch in barley or wheat malt) with nutrients either coming from the malt or through direct addition during the brewing process. Various aroma, flavor and taste components come from hops and water. The type and amount of sugar is the key to determining both the strength and body of a beer. This is typically dialed in by the brewer through the use of different temperatures being used during the mash, where enzymes coming from the malt convert starch into sugars. A typical brewing yeast strain can utilize simple sugars like dextrose, fructose or maltose for fermentation, but not larger more complex sugars. The higher amount of complex sugar left in the wort, the higher the body of the resulting beer. A rule of thumb is the greater the ratio of simple sugar, like dextrose, to complex sugars is in the wort, the greater the alcohol content and the thinner the body of the beer.

Since American Light Lagers have a very thin body, the ratio of simple sugars to complex sugars must be high. While other processes, like the use of enzymes, may be used to more completely break down the starch in malt to dextrose, it is typically easier to add adjuncts (or alternative sugar sources) to substitute for some of the malt in the process in order to boost the simple sugar ratio. Typical adjuncts could be alternative grains, like rice, which are mostly all starch, which are then easily converted to dextrose during the mashing process. Another typical adjunct would be the direct addition of a sugar such as corn syrup.

Corn syrup is, simply, the starch from corn that has been broken down into nearly pure dextrose. Different breweries might have their own favorite adjuncts to use in their process. AB InBev uses rice in their mash to make Bud Light. MillerCoors adds corn syrup directly into the boil for Miller Lite and Coors Light. Either way, the result is the same – yeast use the sugar supplied to them for their fermentation process.

A hallmark of the American Light Lager style is a very clean taste and low levels of overall flavor. The key to this is having a simple sugar like dextrose as the sugar source for fermentation. The dextrose derived from rice starch is identical to that found in corn syrup, and each deliver the same clean taste without distracting off-flavors.

The controversy in this case seems to arise from confusion between corn syrup and other similar-sounding ingredients. In the food industry, there is a product that has become rather controversial over the past few years called High-fructose corn syrup or HFCS. HFCS is a hydrolysate of corn starch, but the process allows for a higher level of fructose to be present in the resulting syrup. Fructose is naturally sweeter than dextrose (about 1.5x sweeter) and about 10% sweeter than sucrose (table sugar), so a HFCS can be used to replace table sugar as a sweetening system for cost savings. This is particularly popular for use in soft drinks. HFCS, due to its fructose content, has been implicated in some studies as causing health issues, such as diabetes and obesity, though there is conflicting data. The corn syrup being used in brewing is *not* HFCS – it is simply dextrose.  However, even if HFCS were used for brewing, yeast would metabolize fructose just like they would dextrose and no fructose would be present after fermentation.

Corn syrup may also be confused with another ingredient (corn meal) that may be used in certain beer styles such as Pre-Prohibition Lager (formerly known as Classic American Pilsner). Corn meal is in essence a coarse corn flour that contains other components along with starch and delivers a “corny” flavor and aroma to a beer. Corn syrup, on the other hand, being just dextrose, does not deliver any corn character to the resulting brew.

So, if you are a fan of the American Light Lager style, all you need to know is that there is no difference between the use of corn syrup or the use of rice when it comes to the finished product. Each is meant to deliver the exact same thing – to give more dextrose for the yeast to metabolize in order to make a clean-tasting, refreshing and thirst-quenching light beer.

Boudreaux went into the fish market to apply for a job. The boss thought to himself – I’m not hiring that lazy Cajun, so he decided to set a test for Boudreaux hoping he wouldn’t be able to answer the questions and he’d be able to refuse him the job without getting into an argument.

The first question was, “Without using numbers, represent the number 9.”

The boss says, “What in the world is that?”

Boudreaux stares into space, then makes a smudge on each tree.

The boss scratches his head and asks, “How on earth do you get that to represent 99?”

The boss is getting worried he’s going to have to hire Boudreaux so he says, “All right, question number 3. Same rules again, but this time represent the number 100.”

Boudreaux stares into space again, then he shouts, “I got it!” He makes a little mark at the base of each tree and says, “Der ya go sir – 100.”

The boss looks at Boudreaux’s attempt and thinks, “Ha! got him this time.” He then tells Boudreaux, “Go on, Boudreaux, you must be crazy if you think that represents a 100.”