Our GUEST TAP is pouring the “No Power” Mandarin Sour from Regina’s Pile O’ Bones Brewing. Next up is a Honey Hemp Ale from Saskatoon’s Prairie Sun Brewing.

Deadline to vote is April 8th! We are pleased to announce that you have nominated your Bushwakker in an unprecedented 20 categories in the 2019 edition of the Prairie Dog Magazine’s Best of Food Regina reader’s poll. Those nomination categories include Regina’s Best: brewpub, pub, pub server (Cheryl), bartender (Troy), chef (Mike), nachos, appetizers, soup, pub pizza, wings, business lunch, lunch restaurant, sandwich, burger, local fries, happy hour, caesar, restaurant for a first date, restaurant for a party AND restaurant for a fundraiser! Visit the voting site at http://www.prairiedogmag.com/best-of-food-2019/#// before April 8th and turn those nominations into victories! If you vote in at least 20 categories, you have a chance to win a $500 prize package from the Prairie Dog. 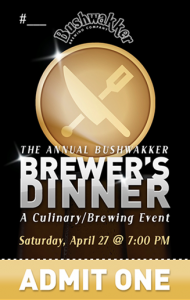 Tickets to the April 27th BUSHWAKKER BREWER’S DINNER are on sale now! Don’t miss out on the signature event of the Bushwakker Brewpub. A four-course meal in which each dish utilizes a unique beer as an ingredient and is paired with a unique beer to enhance the flavours of the food.  This year’s fun and festive dinner theme will be MARDI GRAS! This is one of Chef Mike’s favourite culinary styles. Tickets only $69.95 each. Cutting-edge beer cuisine awaits! This year’s menu is as follows:

What a start! This “amuse-bouche” features an IPA Rock and Lump crabmeat cake with zesty remoulade aioli and garnished with micro greens.
Prepared with: Chico IPA

Apr. 5: FIRST FIRKIN FRIDAY. Enjoy the pomp and circumstance of this longstanding Bushwakker monthly tradition! A piper from The Regina
Police Services Pipes & Drums leads a small keg (the firkin) of special ale throughout the pub in a procession. A guest volunteer tapper is selected to wield the handmade wooden maul affectionately named, The Mighty Firkin Wakker, and attempt to tap the keg in one swift blow! This month’s firkin will be Vanilla Creamsicle Blood Orange Blonde. The suds-soaking spectacular takes place at 5:30 PM. 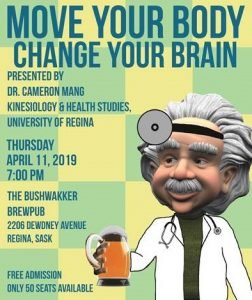 Apr. 11: HEALTH SCIENCE PUB – Move Your Body, Change Your Brain. The monthly Science Pub will take place one week this month. Our wildly popular Science Pub Series has returned for a seventh incredible season! Enjoy lectures on scientific topics of general interest in our Arizona Room (main floor banquet room) over beer and snacks. The room opens at 5:00 PM and quite often is full by 6:00 PM. Avoid disappointment and come down early for dinner and a pint before the presentation which begins at 7:00 PM. This month’s lecture will be presented by Dr. Cameron Mang. Whether texting on a phone, swinging a golf club, or drinking a beer, movement allows humans to interact with the world around us. With relatively little effort, we learn new movement skills and adapt existing ones to specific situations every day. The complexity of our movements is only surpassed by that of the intricate and ever-changing brain networks that support it. The ability of the brain to change, or undergo neuroplasticity, is at the heart of our capacity to learn new movements and even recover movement skills lost due to brain damage. But sometimes our movement skills still leave something to be desired. So, what can we do to make the brain learn faster, learn more or recover quicker? How can we leverage a seemingly good system to work even better?

Apr. 15: Monday Night Jazz & Blues. THE JAZZ BAND-ITS. The biggest band to grace the Bushwakker stage plays big band, jazz and swing. 8:00 PM.
Apr. 17: Wednesday Night Folk. THE RED WAGON GYPSIES. Acapella/ acoustic harmonies from Angela Ell (who will be celebrating her birthday) and Tamara Scrimbit. It doesn’t get “folkier” than this! 8:00 PM.
Apr. 19: Open at noon on Good Friday.

Whether you’re a brewer forecasting what might be viable in the near future, a merchandiser aiming to please the masses, or just want to be the cool person at the company mixer: If you want to know where craft beer is headed, look no further than the imported beer segment.

There are two reasons imports are directly charting the course of craft consumption. First, imported beer sales are largely anchored in traditional lager styles that truly boast tradition and the trappings of authenticity that come with it. The main exception to this rule from a market share segment is Belgian beer, but the idea of tradition and authenticity remains every bit as valid for these legendary brewers. A fledgling craft brand without a seed of authenticity is almost guaranteed to be washed away in today’s tide of SKUs.

Second, as oft stated, these overseas and cross-border counterparts in beer production are already doing what American brewers are just now catching on to, namely forsaking the molasses-laden stouts and enamel- stripping hop bombs reminiscent of the American frontier mentality that has defined craft beer for the last decade.

Doing away with these “training wheels” is like going on a date without makeup or playing an electric guitar without reverb; there’s nowhere to hide your imperfections. And that’s now okay, because America is learning to brew better. The future of American craft is here, and it is already written in the light, refined styles European and Mexican beer brewers have championed for ages. Let’s check the numbers.

Within total beer sales for the year of 2018, imported beer is playing an increasingly large and dynamic role. 2017 saw sales increase considerably for the category, and 2018 saw those numbers continue their upward trend. Dollar sales for the calendar year of 2018 rung in at about $7 billion, which was an increase of roughly $488 million compared to 2017 or more than 7 percent.

This puts imported beer at almost exactly 20 percent of the entire beer market share, and second to only Domestic Premium Budweiser, Miller Coors…) in total sales. While Domestic Premiums still comprise about 36 percent of total market share, sales for that category dropped by over half a billion this past year, which can be interpreted as a one-two punch from Imports and Craft. Imports are a mixed bag of high-margin, lower-volume segments like Belgian beer and higher-volume, lower price-point powerhouses a la Mexican beer, which combine into an alluring set of new experiences for the drinker that still retain an air of comfort and familiarity. They share similarities with both Craft and Domestic categories, but simply by virtue of being from elsewhere they boast a competitive edge – at least in the current state of the market.

While the defined Import category is flourishing, not all its segments are faring equally as well.

In a modern clime of escapism where everyone is seeking to “find their beach” and stay healthy with lighter beer styles that retain an element of style, Mexican beer is likely the first choice.

A very attractive young lady was sitting in a fine restaurant one night.

Waiting for her date as she was, she wanted to make sure everything was perfect. So, as she bends down in her chair to get the mirror from her purse, she accidentally farts quite loudly just as the waiter walks up.

Sitting up straight now, embarrassed and red faced, knowing everyone in the place heard her, turns to the waiter and demands, “Stop That!”

The waiter looks at her dryly and says “Sure lady, which way was it headed?”