Our GUEST TAP  will be pouring the O’Hara’s Irish Stout from Bagenalstown, Ireland as part of our big St. Patrick’s Day Weekend Celebration on March 16 and 17th. Next up is a Double IPA from Swift Current’s Black Bridge Brewery. This will be followed by Paddock Wood’s  Xocolatl Porter which is made with three types of chocolate malt and real chocolate.

Our March premium wine features are the DUPLICATE WINES from Australia. The white is a Sauvignon Blanc and the red is a Shiraz. Both are $7.95 for a glass and $21.95 for a half litre.

650 ml glass bottles of our number one selling DUNGARVON IRISH RED ALE are currently available at ALL SIX SLGA stores including the Normanview, Quance Street, Broadway Avenue, North Albert Street, Dewdney & Lewvan and South Albert locations! ATTENTION SASKATOON RESIDENTS! You can now find our Dungarvon in bottles as well as on tap at the Growler Filling Station in the Saskatoon Metro Liquor store! 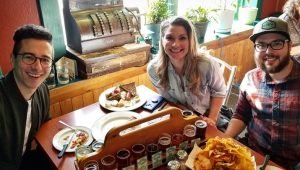 We had a great time at Bushwakker last Saturday devouring a Saskatchewan Hot Plate, a Pop’s Pizza and a famous Bushwakker nachos and then washing it all down with a complete beer sampler tray with former Saskatchewanders;  Ashlyn George, Andrew Hiltz and Kevin Dunn. Their challenge was to visit six Queen City craft beer zones in only six hours! No small feat. They will soon release a story on Regina’s vibrant craft brewing culture called, “A Guide to Regina’s Craft Breweries by Three Saskatchewanderers”. You can catch their experiences on Facebook, Twitter and Instagram. Much thanks to Tourism Regina for spearheading this exciting initiative!

Mar. 15: CHERYL TOVEY TURNS 60! Longtime Bushwakker floor manager, Cheryl Tovey, winds up six decades on the planet and invites you to join her in a pint during Happy Hour today. She would love to see you and reminds everyone that she has everything a girl could possibly need so please don’t bring her any presents. However, if you wish to donate to her charity bin, she will be collecting donations for the Regina Food Bank, Souls Harbour Rescue Mission, Carmichael Outreach and the Regina Humane Society. She is giving the love back to our community! 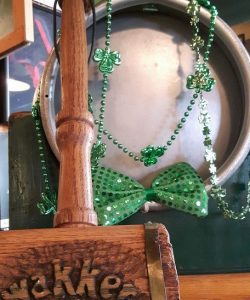 Our two day St. Patrick’s Day Weekend kicks off with the tapping of a firkin of Irish Coffee Stout on Saturday, March 16 at 5:00 PM.

Mar. 21: SCIENCE PUB. Virtual Reality: Past failures, Current Hype, and Future Vision. Our wildly popular Science Pub Series has returned for a seventh incredible season! Enjoy lectures on scientific topics of general interest in our Arizona Room (main floor banquet room) over beer and snacks. The room opens at 5:00 PM and quite often is full by 6:00 PM. Avoid disappointment and come down early for dinner and a pint before the presentation which begins at 7:00 PM. This month’s lecture will be presented by Dr. David Gerhard, Dept. of Computer Science, University of Regina.Virtual reality has long been the dream of science fiction, education, and entertainment.  The ability to craft a world entirely of your own making, beyond the frustrating real-world constraints of gravity, physics, and consequences, would allow people to go anywhere, do anything, or be anyone.  We have been working on ways to record and represent reality since antiquity, and our first attempts to simulate reality were decades ago. What makes this new generation of VR headsets different? Is it another tech trend destined to fail, or is it the start of a new generation of believably immersive simulated experiences?

Mar. 23: SASK SAMPLER. The biggest Bushwakker Folk Night of the year! Up-and-coming folk artists from across the province strut their stuff for a spot on the Regina Folk Festival, Ness Creek Music Festival and Gateway Music Festival stages. This year’s line-up includes: Marissa Burwell, ygretz, West of Mabou, Anna Haverstock, Dagan Harding Band, and The Won’ts. It’s not a Folk Band Warz but it is a great night of Saskatchewan musical talent! Plan to arrive early in order to get a good seat! $10 cover charge. 7:00 PM.

Everything You Need to Know About Guinness

Guinness: the iconic black pint with the creamy white clerical collar and a flash of ruby in its depths. Who doesn’t know it? Who hasn’t drunk it?

But while Guinness is famed and drunk around the world, half the world knows a very different kind of Guinness to the drink the other half swallows. In Ireland, the drink’s original home, North America and Europe, Guinness Draft—which celebrates its 60th anniversary this year—is the familiar friend to lovers of creamy stout. Served in a pint glass, with its initial surge of bubbles that gradually settle out into the familiar deep, dark body and blond head.

In Africa and Asia, drinkers are much more familiar with an older style of Guinness, known as Foreign Extra Stout, or FES, which comes in bottles, is almost twice as strong as draft Guinness and has a powerful, tart flavor that’s surprisingly refreshing in a hot climate.

The story of Guinness is the tale of how one small and run-down brewhouse on a street lined with other breweries grew into what became, for a long time, the biggest brewery in the world.

Arthur Guinness acquired the brewery at St. James’s Gate in 1759 and was likely brewing his famed porter a few years later.

The brewery at St James’s Gate passed to Mee’s son-in-law, Mark Rainsford, and then to a Huguenot family of French settlers called Espinasse. But in 1750 the then owner, John Espinasse, was thrown from his horse near Drogheda, some 30 miles north of Dublin, and—depending on which newspaper report you read—either fractured his skull or dislocated his neck, dying immediately.

Although St James’s Street was a popular thoroughfare with brewers, thanks to the several watercourses that ran across it down to the Liffey, Dublin’s main river (even in 1804 a city directory listed eight breweries on the street), the St James’s Gate premises appear to have remained empty for nine years after John Espinasse’s death, until Arthur Guinness came along in 1759 to sign his now-famous 9,000-year lease.

The drinks that Dublin’s breweries were making at the time were table beer, and a strong, lightly hopped brown ale. But they were suffering increasing competition from imports of English Porter, the aged, well-hopped brown-black beer that had originally been developed to appeal to the working classes of London, but which had found a market around the world. Dublin’s brewers responded by brewing porters themselves from the 1760s onward. Exactly when Arthur Guinness first made porter is not known, but he was probably doing so by 1779, when he was appointed one of the two official suppliers of ale and beer to Dublin Castle, seat of the Irish government, and definitely by 1784, when he was specifically fingered as the supplier of porter to the castle.

Guinness was still making the traditional Dublin brown ale as well. But early in 1799 the decision was made to stop brewing ale completely. From then on, Guinness would be a porter and stout specialist. Arthur Guinness I died four years later, in 1803, aged 78, and the brewery was continued by his second son, Arthur Guinness II. Already a special, stronger, more heavily hopped West India porter was being brewed, which eventually developed into what became known as Foreign Extra Stout.

TIME OUT- Even More Actual Writings on Hospital Charts

21. Both breasts are equal and reactive to light and accommodation.

22. Examination of genitalia reveals that he is circus sized.

25. The pelvic exam will be done later on the floor.

27. Patient has two teenage children, but no other abnormalities

28. When she fainted, her eyes rolled around the room

29. The patient was in his usual state of good health until his airplane ran out of gas and crashed.

30. Between you and me, we ought to be able to get this lady pregnant.