NEWS FROM THE BREWERY! Head brewer, Michael Gaetz, reports our seasonally available TWO SON'S MILK STOUT, BOW PROJECT AMARILLO S.M.A.S.H., FLEK’S CZECH DARK LAGER, CHINOOK ESB, and BLOOD ORANGE BLONDE ALE are currently on tap. There are batches of PICKARD’S OATMEAL STOUT and PONCE DE LEON FRUIT ALE working their way through the brewery. Our GUEST TAP is currently pouring a Bourbon Barrel-Aged Dunkel from Regina’s District Brewing. Next up is the Heartstopper Hot Chocolate Stout from Saskatoon’s Paddock Wood Brewing. Our March premium wine features are the DUPLICATE WINES from Australia. The white is a Sauvignon Blanc and the red is a Shiraz. Both are $7.95 for a glass and $21.95 for a half litre. 650 ml glass bottles of our number one selling DUNGARVON IRISH RED ALE are currently available at ALL SIX SLGA stores including the Normanview, Quance Street, Broadway Avenue, North Albert Street, Dewdney & Lewvan and South Albert locations! ATTENTION SASKATOON RESIDENTS! You can now find our Dungarvon in bottles as well as on tap at the Growler Filling Station in the Saskatoon Metro Liquor store!

We are pleased to announce that you have nominated your Bushwakker in an unprecedented 20 categories in the 2019 edition of the Prairie Dog Magazine’s Best of Food Regina reader’s poll. Those nomination categories include Regina’s Best: brewpub, pub, pub server (Cheryl), bartender (Troy), chef (Mike), nachos, appetizers, soup, pub pizza, wings, business lunch, lunch restaurant, sandwich, burger, local fries, happy hour, caesar, restaurant for a first date, restaurant for a party AND restaurant for a fundraiser! Visit the voting site at http://www.prairiedogmag.com/best-of-food-2019/#// before April 8th and turn those nominations into victories! If you vote in at least 20 categories, you have a chance to win a $500 prize package from the Prairie Dog. After a five year run, it is time to release a brand new Bushwakker website. Final touches are being made and the shiny new site should be launched in just a few more weeks. Be sure to visit www.bushwakker.com and let us know what you think!

Mar 1: FIRST FIRKIN FRIDAY. Enjoy the pomp and circumstance of this long standing Bushwakker monthly tradition. A piper from the Regina Police Services Pipes and Drums leads a keg of special brew in a procession throughout the brewpub. A guest volunteer is selected to wield the handmade wooden maul affectionately referred to as The Mighty Firkin Wakker, and attempt to tap the firkin in one mighty blow. This month’s offering will be a BUTTERSCOTCH BROWN ALE. The delicious beer and suds-soaking experience takes place at 5:30 PM. Mar. 2: SATURDAY AFTERNOON BLUES SHOWCASE. Presented in conjunction with The Regina Delta Blues Association and The Mid-Winter Blues Festival Week, our Saturday afternoon showcase is a great way to warm up for the festival finale later that evening. Enjoy two exciting blues bands beginning at 1:30 PM including: The AZ Paris Band as well as Billy Hughes & the Instigators who will deliver a special tribute to the Plains Hotel famous Saturday jams. Hosted by Jeff ''Redbeard" Corbett of 91.3FM CJTR. Be sure to try a slice of Redbeard’s signature chocolate caramel cheesecake too! We will also be presenting live blues music at 8:00 PM on the Monday and Wednesday evening earlier that week. 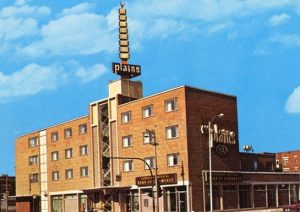 The famous Saturday afternoon blues jams at Good Time Charlies in Regina’s Plains Hotel will receive a special tribute at Bushwakker March 2nd. Mar. 4: Monday Night Jazz & Blues. ‘ROUND MIDNIGHT. Veteran act delivers great jazz standards and adult contemporary tunes. 8:00 PM. Mar. 6: Wednesday Night Folk. REGINA SINGER/SONGWRITER ASSOCIATION & SASK MUSIC PRESENTS: Scott Anthony Andrews, Annie MacLeod, and James Gates. 8:00 PM. Mar. 6: MONTHLY ALES MEETING. If you are looking to improve your skills as a homebrewer or just want to sit in a room filled with people who have a passion for creating great beer in the basement, then the ALES Club is for you! This month’s discussion topic will be Sours. Meetings are held in the Bushwakker basement clubroom on the first Wednesday of each month at 8:00 PM. New members are always welcome. Mar. 11: Monday Night Jazz & Blues. CHRIS WALLACE. Toronto quartet plays original modern jazz. 8:00 PM. Mar. 13: Wednesday Night Folk. SUN ZOOM SPARX. Funk, jazz fusion, psychedelia and mid-70’s ambience. 8:00 PM. Mar. 15: CHERYL TOVEY TURNS 60! Longtime Bushwakker floor manager, Cheryl Tovey, winds up six decades on the planet and invites you to join her in a pint during Happy Hour today. She would love to see you and reminds everyone that she has everything a girl could possibly need so please don’t bring her any presents. However, if you wish to donate to her charity bin, she will be collecting donations for the Regina Food Bank, Souls Harbour Rescue Mission, Carmichael Outreach and the Regina Humane Society. She is giving the love back to our community! Mar. 16 & 17: ST. PATRICK’S DAY WEEKEND. A two-day Irish celebration! Enjoy traditional Irish food, drink and entertainment Saturday night as well as Sunday afternoon and early evening too! The weekend kicks off with the tapping of a firkin of the extremely popular IRISH COFFEE STOUT at 5:00 PM and will be followed by Irish dancing, pipes & drums and a special Celtic performance from WEST OF MABOU. We open at noon on Sunday and The Prairie School of Irish Dance will perform at 1:00 PM followed by music act, THE HIGHLANDERS, pipes & drums and a suppertime performance from massive acoustic Celtic act, BILLARNEY. Enjoy Corned Beef & Cabbage, Belfast Breakfast Burger, O’Hara’s Stout Lamb Stew, Irish Whiskey Bread Pudding, Guinness, Green Shamrock Ale, Green Spot Single Pot Still Irish Whiskey and more this Saturday and Sunday! $5 cover charge. Mar. 18: Monday Night Jazz & Blues. THE U OF R JAZZ BAND. Come hear this huge act comprised of local future jazz starts! 8:00 PM. Mar. 20: Wednesday Night Folk. CHRIS SPAKE. Australian singer/songwriter delivers lush acoustic pop and tells stories that burn a memorable experience. 8:00 PM. Mar. 21: SCIENCE PUB. Virtual Reality: Past failures, Current Hype, and Future Vision. Our wildly popular Science Pub Series has returned for a seventh incredible season! Enjoy lectures on scientific topics of general interest in our Arizona Room (main floor banquet room) over beer and snacks. The room opens at 5:00 PM and quite often is full by 6:00 PM. Avoid disappointment and come down early for dinner and a pint before the presentation which begins at 7:00 PM. This month’s lecture will be presented by Dr. David Gerhard, Dept. of Computer Science, University of Regina.

"Illusion of choice" is no Mirage

1. The patient refused autopsy. 2. The patient has no previous history of suicides. 3. Patient has left white blood cells at another hospital. 4. Patient's medical history has been remarkably insignificant with only a 40 pound weight gain in the past three days. 5. She has no rigors or shaking chills, but her husband states she was very hot in bed last night. 6. Patient has chest pain if she lies on her left side for over a year. 7. On the second day the knee was better and on the third day it disappeared. 8. The patient is tearful and crying constantly. She also appears to be depressed. 9. The patient has been depressed since she began seeing me in 1993. 10. Discharge status: Alive, but without my permission.
This Weekend’s Special Dining Feature: 1/2 Rack Memphis BBQ Ribs. $19.95
Soup & Sandwich Special is $13.95.  All hot specials are $16.95, except where noted, & include a serving of soup du jour, house, or Caesar salad.