NEWS FROM THE BREWERY! Head brewer, Michael Gaetz, reports our seasonally available BOW PROJECT AMARILLO S.M.A.S.H., FLEK’S CZECH DARK LAGER, CHINOOK ESB, and BLOOD ORANGE BLONDE ALE are currently on tap. There are batches of PICKARD’S OATMEAL STOUT, TWO SON'S MILK STOUT and PONCE DE LEON FRUIT ALE working their way through the brewery. Our GUEST TAP is currently pouring the Andromeda Imperial IPA from Saskatoon’s Paddock Wood Brewery. Next up is a Bourbon Barrel Aged Dunkel from Regina’s District Brewing. Our February premium wine features are the ENIGMA WINES from California. The white is a Chardonnay and the red is a Cabernet Sauvignon. Both are $7.95 for a glass and $21.95 for a half litre. 650 ml glass bottles of our number one selling DUNGARVON IRISH RED ALE are currently available at ALL SIX SLGA stores including the Normanview, Quance Street, Broadway Avenue, North Albert Street, Dewdney & Lewvan and South Albert locations! ATTENTION SASKATOON RESIDENTS! You can now find our Dungarvon in bottles as well as on tap at the Growler Filling Station in the Saskatoon Metro Liquor store! It is that time of the year again to nominate The Bushwakker in the various categories found in the annual Prairie Dog Best of Food Regina reader’s poll. If you like our beer, food, events and service, then please share your enthusiasm with you nomination. Let’s help Cheryl get that 10th win as Best Server in Regina by visiting: https://www.prairiedogmag.com/best-of-food-2019/#//. And perhaps Troy can be “three times lucky” and finally win Regina’s Best Bartender after his two second place showings! 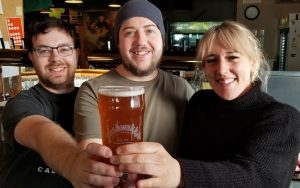 The Bushwakker brewing team is very excited about our first ever Single Malt and Single Hop beer which was released on February 8th. The BOW PROJECT AMARILLO S.M.A.S.H. features Saskatchewan developed, grown and malted Bow barley. Bready and biscuity malt flavours with plenty of fresh tropical and orange Amarillo hop character. For more information on The Bow Project, visit http://makersmalt.com/the-bow-project/. Congratulations to GORD HUNTER! He was the winner of our Bushwakker 28th Birthday Quiz Draw and received a $100 Bushwakker gift card. After a five year run, it is time to release a brand new Bushwakker website. Final touches are being made and the shiny new site should be launched in just a few more weeks. Be sure to visit www.bushwakker.com and let us know what you think! 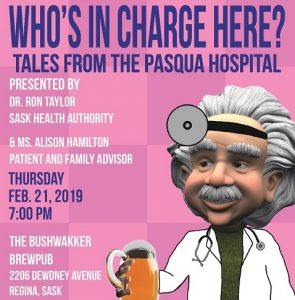 Feb. 21: HEALTH SCIENCE PUB – Who’s in Charge Here? Tales from the Pasqua Hospital. Our wildly popular Science Pub Series has returned for a seventh incredible season! Enjoy lectures on scientific topics of general interest in our Arizona Room (main floor banquet room) over beer and snacks. The room opens at 5:00 PM and quite often is full by 6:00 PM. Avoid disappointment and come down early for dinner and a pint before the presentation which begins at 7:00 PM. This month’s lecture will be presented by Dr. Ron Taylor from the Saskatchewan  Health Authority and  Ms. Alison Hamilton who is a Patient and Family Advisor. Ron and Alison will describe how the Pasqua Hospital became the Canadian leader in a transformative care model that addresses the chaos of standard in hospital ward care. Accountable Care Units(ACUs) were developed in the USA and have been implemented in Australia but never in Canada... until now. Come and find out what an ACU is and why it has patients standing shoulder to shoulder with clinicians advocating for the adoption of this model throughout hospitals in Saskatchewan.  Feb. 25: Monday Night Jazz & Blues - special Mid-Winter Blues Festival edition. TERRAPLANE. Talented blues band lead by Regina’s friendliest bluesman, Shane Reoch, returns for a long overdue performance. 8:00 PM. Feb. 27: Wednesday Night Folk – special Mid-Winter Blues Festival edition. A STORRY WITH HUGHES. Talented rockin’ acoustic blues duo featuring Jeff Storry and Billy Hughes. 8:00 PM. Mar. 2: SATURDAY AFTERNOON BLUES SHOWCASE. Presented in conjunction with The Regina Delta Blues Association and The Mid-Winter Blues Festival Week, our Saturday afternoon showcase is a great way to warm up for the festival finale later that evening. Enjoy two exciting blues bands beginning at 1:30 PM including: The AZ Paris Band as well as Billy Hughes & the Instigators who will deliver a special tribute to the Plains Hotel famous Saturday jams. Hosted by Jeff "Redbeard" Corbett of 91.3FM CJTR. Be sure to try a slice of Redbeard's signature chocolate cheesecake too! We will also be presenting live blues music at 8:00 PM on the Monday and Wednesday evening earlier that week. Mar. 4: Monday Night Jazz & Blues. ‘ROUND MIDNIGHT. Veteran act delivers great jazz standards and adult contemporary tunes. 8:00 PM. Mar. 6: Wednesday Night Folk. REGINA SINGER/SONGWRITER ASSOCIATION & SASK MUSIC PRESENTS. Scott Anthony Andrews, Annie MacLeod, and James Gates. 8:00 PM. Editor’s note. The following article written by Canadian beer guru, Stephen Beaumont, illustrates the commitment the Bushwakker brewery has made to craft brewing. We have been producing “true-to-style” craft beers for almost three decades. Many of the beers we first introduced in 1991 are still found on tap today. Signature brews like Palliser Porter, Regina Pale Ale, Last Mountain Lager, Stubblejumper Pils and Northern Lights Lager have never left our beer menu – and for good reason! Although we love our 25 + seasonal and specialty brews as well as the continuous new beers we introduce every year, we agree that craft beer lovers should not be continually distracted by the next hot beer style. This month, take time to revisit an old favourite which perhaps first introduced you to the craft brewing world. Chances are it will taste just as delicious as ever and will certainly reaffirm your love of craft!

By Stephen Beaumont What sometimes gets lost amid the constant stream of special releases are the beers that paved the way for today’s remarkable global beer market, or in other words, the flagship beers that got us here. There are, by some estimates, in excess of 22,000 operating breweries in world today. At a very conservative count of only a dozen brands per brewery, that makes in excess of a quarter million different beers being sold around the globe, plus, of course, the multitude of special releases that for some breweries number in the hundreds per year. That’s a lot of beer! While we, like any sane beer drinker, are thrilled by this. Increasingly, it seems to us that what leads people to drink a beer is less whether or not it’s good than it is whether it’s new or, better still, rare. While this is not necessarily a bad thing – new brands and styles keep it all exciting, after all! – what sometimes gets lost in the special release noise this produces are the beers that paved the way for the remarkable global beer market we presently have at our disposal, or in other words, the flagship beers that got us here. And so, we created #FlagshipFebruary. The idea of Flagship February – the hashtag, the website and the movement – is not to try to shore up sales of the flagship beers of various breweries – that’s the job of the marketing and sales divisions of those breweries. Our thinking is that flagship beers have much to teach new drinkers and remind older drinkers, and if they fall off the radar so far that they disappear completely, we will all be that much poorer for it. To cite but a few examples: Samuel Adams Boston Lager normalized what we used to call ‘microbrews’ in the United States, opening up markets like sports and airport bars to beers with character, and it is still a very fine lager. Cantillon Gueuze was the vanguard for the lambic revival in Belgium, aided in large part by the legendary beer writer Michael Jackson, and in some ways provided the spark for today’s ‘sour beers.’ Without question, it remains a stellar example of spontaneous fermentation. Hobsons Champion Mild was introduced when mild ales were experiencing their steep decline in Britain, and helped to re-popularize the style, earning its ‘Champion’ moniker in 2007 when it beat out the fashionable golden bitters of the time to be named Champion Beer of Britain. And it, too, remains a classic. Since it is easy to overlook these and many other still-great flagship beers when beer store shelves and barroom taps heave with new and special edition brews, #FlagshipFebruary is about taking a pause to reconsider flagship beers that might have slipped off your radar, or never occurred to you to try! We are not suggesting that people only drink flagship brands all month long – that’s not what we will be doing and is, in fact, the sort of approach to drinking that the flavourful beer renaissance was developed to combat! What we are recommending is that this would be a good month to try a bottle or glass or pint of old school flagship ale or lager from time to time, in between samples of the latest hazy IPA or fruit-fueled gose. Who knows? It may turn into a very tasty and enjoyable habit!

Three women: one engaged, one married and one a mistress, are chatting about their relationships and decided they needed to spice up their love lives. All three agreed to wear black leather bras, stiletto heels and a mask over their eyes that evening with their respective lovers. After a few days they meet up for lunch and compared notes. The engaged woman: "The other night when my boyfriend came over he found me with a black leather bodice, tall stilettos and a mask. He saw me and said, 'You are the woman of my life. I love you.' Then we made love all night long." The mistress: "Me too! The other night I met my lover at his office and I was wearing the leather bodice, heels, mask over my eyes and a raincoat. When I opened the raincoat he didn't say a word, but we had sex all night." The married woman: "I sent the kids to stay at my mother's house for the night when my husband came home I was wearing the leather bodice, black stockings, stilettos and a mask over my eyes. As soon as he came in the door and saw me he said, 'What's for dinner, Batman?'"