NEWS FROM THE BREWERY! Head brewer, Michael Gaetz, reports our seasonally available MISSILETOW ALE, ARCTIC DARK, CHINOOK ESB, and MANGO CHERRY FRUIT BEER are currently on tap. There are batches of PICKARD’S OATMEAL STOUT, TWO SON'S MILK STOUT, FLEK’S CZECH DARK LAGER, and THE BOW PROJECT AMARILLO S.M.A.S.H. working their way through the brewery. Our GUEST TAP is currently pouring the brand new Black Bridge Winter Warmer which will be followed by the Andromeda Imperial IPA from Saskatoon’s Paddock Wood Brewery. Our February premium wine features are the ENIGMA WINES from California. The white is a Chardonnay and the red is a Cabernet Sauvignon. Both are $7.95 for a glass and $21.95 for a half litre. 650 ml glass bottles of our number one selling DUNGARVON IRISH RED ALE are currently available at ALL SIX SLGA stores including the Normanview, Quance Street, Broadway Avenue, North Albert Street, Dewdney & Lewvan and South Albert locations! ATTENTION SASKATOON RESIDENTS! You can now find our Dungarvon in bottles as well as on tap at the Growler Filling Station in the Saskatoon Metro Liquor store! It is that time of the year again to nominate The Bushwakker in the various categories found in the annual Prairie Dog Best of Food Regina reader’s poll. If you like our beer, food, events and service, then please share your enthusiasm with you nomination. Let’s help Cheryl get that 10th win as Best Server in Regina by visiting: https://www.prairiedogmag.com/best-of-food-2019/#//. And perhaps Troy can be “three times lucky” and finally win Regina’s Best Bartender after his two second place showings! 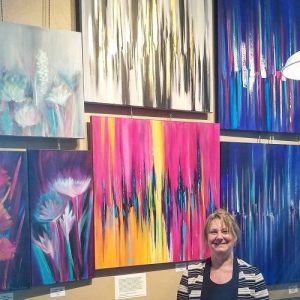 Our BUSHWAKKER LOCAL ARTIST WALL features the works of TRACY BJORGAN for the month of February. Tracy is an emerging abstract painter from Regina. She began experimenting with acrylics on canvas in 2015 and quickly discovered her love of creating bold and dramatic abstract and floral paintings. Tracy’s paintings are in numerous private collections. Her paintings are featured at the yearly Alzheimer’s Society’s Fall Gala A Night to Remember and her artworks were used on the movie set Welcome to Nowhere filmed in Regina in 2017. Tracy is very proud to be represented by the Ripplinger Fine Art Gallery and has numerous framed and unframed paintings available for sale in the gallery and in Henry’s Cafe. Tracy can be contacted through her website www.tracybjorgan.ca. Enjoy her vibrant and colourful work all this month! 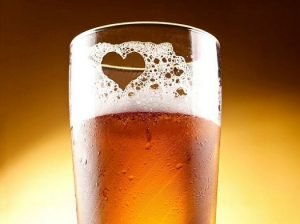 Feb. 14: BUSHWAKKER VALENTINE’S SWEETHEART DINNER. Fancy-schmancy restaurants may be the choice destination for some young lovers. Others who prefer great value and delicious food in a comforting and cozy setting often prefer to enjoy their Valentine’s experience with us. Bushwakker executive chef, Mike Monette, will offer a Classic Valentine Dinner Feature which is sure to impress. This year we will offer BEEF WELLINGTON with an optional CRÈME BRULEE dessert feature. Reservations accepted! Feb. 18: FAMILY DAY. Open from noon to nine. Feb. 20: Wednesday Night Folk. TONGUE JUNGLE. Regina duo featuring two part harmonies, fun times and memorable songs. 8:00 PM. Feb. 21: HEALTH SCIENCE PUB – Who’s in Charge Here? Tales from the Pasqua Hospital. Our wildly popular Science Pub Series has returned for a seventh incredible season! Enjoy lectures on scientific topics of general interest in our Arizona Room (main floor banquet room) over beer and snacks. The room opens at 5:00 PM and quite often is full by 6:00 PM. Avoid disappointment and come down early for dinner and a pint before the presentation which begins at 7:00 PM. This month’s lecture will be presented by Dr. Ron Taylor from the Saskatchewan  Health Authority and  Ms. Alison Hamilton who is a Patient and Family Advisor. Questions which may be addressed include: what is normal hospital care, what is an ACU and why should anyone care, what did the Pasqua do, what does this mean to patients/ families and where might this all go? Feb. 25: Monday Night Jazz & Blues - special Mid-Winter Blues Festival edition. TERRAPLANE. Talented blues band lead by Regina’s friendliest bluesman, Shane Reoch, returns for a long overdue performance. 8:00 PM. Feb. 27: Wednesday Night Folk – special Mid-Winter Blues Festival edition. A STORRY WITH HUGHES. Talented rockin’ acoustic blues duo featuring Jeff Storry and Billy Hughes. 8:00 PM. Mar. 2: SATURDAY AFTERNOON BLUES SHOWCASE. Presented in conjunction with The Regina Delta Blues Association and The Mid-Winter Blues Festival Week, our Saturday afternoon showcase is a great way to warm up for the festival finale later that evening. Enjoy two exciting blues bands beginning at 1:30 PM including: The AZ Paris Band as well as Billy Hughes & the Instigators who will deliver a special tribute to the Plains Hotel famous Saturday jams. Hosted by Jeff ``Redbeard` Corbett of 91.3FM CJTR. Be sure to try a slice of Redbeard's signature chocolate cheesecake too! We will also be presenting live blues music at 8:00 PM on the Monday and Wednesday evening earlier that week.

Brewery Growth is Both Urban and Rural

By Bart Watson As the number of farm and rural breweries has grown, I’ve recently gotten several inquiries about whether rural breweries have increased in popularity in recent years. In absolute terms, the answer is an unqualified yes, but that answer is fairly unsatisfying, since breweries have simply increased everywhere. So prompted by a sharp question on Twitter, I decided to look at the number of breweries based on the population of various places over time. To do this, I’m using the Census Bureau’s data on urbanized areas and clusters. Urbanized areas are regions of 50,000 people or more, and urban clusters run from 2,500 to 50,000 people. Anything else is considered outside an “urban” area – so this definition of rural will include small towns less than 2,500 people that aren’t associated with a larger urban area. (The U.S. Census Bureau has a fun story map series to illustrate these definitions.) Rural Breweries Have Increased Overall But Decreased as a Percentage The results are fascinating, and show that as a percentage, the number of breweries in rural areas and the smallest towns under 2,500 people has actually decreased as a percentage of all breweries since 2013, despite a growth of 129% in the number those breweries overall (note that total brewery growth has been 142% since 2013). I’ve used the 2010 Census population data for both time periods – if there were updated data by place and year, it might shift the results slightly. One big caveat: a different method of analysis gives a higher number of rural breweries. Although the results are very highly correlated, the GIS analysis found that a much higher percentage (15.6%) of breweries fall outside of Census Bureau defined urban places. The difference is likely due to the higher sensitivity of the GIS analysis, and that many breweries are just outside city limits, but still within zip codes covered by those cities. Because I can’t create a comparable 2013 GIS analysis, I’ll be focusing on the zip code analysis. That said, the GIS map is cool (that’s a technical term). Number of Breweries Per Capita Is Inversely Related to Urban Population Compiling this data leads to a very interesting secondary finding – that the number of breweries per capita is actually inversely related to the urban population. For the largest urban areas – this makes a great deal of sense. Not only are those places typically pretty expensive, they are already going to have a very competitive landscape of food and beverage options. Currently there are only 100 more breweries in the most populated urban areas (5M+) as there are in rural areas/the smallest towns. What I find more interesting is that the per capita numbers continue to increase as you move down in population, and that urban clusters with 2,500 to 10,000 people actually have the most breweries per capita. Those areas have 7.6% of the breweries in the country, despite only representing 3.5% of the U.S. population (although their population may be larger if you included outlying rural areas that use those clusters for commercial services). I won’t pretend to have a great explanation for this finding, but I’d bet its combination of lower costs, easier entry (via zoning/regulation), and lower competition. For some places, I could also see tourism playing a role, but I doubt a high percentage of towns that size are tourist destinations. Finally, as the difference between the GIS analysis and the zip analysis, it’s possible that many small towns are “bigger” than their defined population, and may actually draw on a bigger population base from outlying rural areas. All that said, I’m still open to other explanations for this finding. State Is Still a Better Predictor than Population One note of caution for any would-be brewery entrepreneurs looking for a location: these population findings are much weaker than state effects. Although this analysis is a bit messy since some urban areas cut across state lines, the size of an urban area is no longer a statistically significant explanatory variable for breweries per capita when included in a multiple linear regression that controls for state (the state variable is highly significant). Translated back into English – knowing what state an urban area is in is going to be a much better predictor of how many breweries per capita a city has than how many people it has (population of course matters for the total number of breweries). So to sum, although the number of rural breweries has certainly increased, that increase is in line with the overall growth of breweries in the U.S. It will be interesting to watch those patterns in this more competitive environment. As the data show, those areas still have fewer breweries per capita, but obviously far less density to draw on. It will also be interesting to watch closing patterns. As one Twitter user suggested, it’s possible that the smallest towns will be brewery “canaries in the coalmine” due to their smaller population bases. Certainly something I’ll be delving into as we compile the final 2018 opening and closing figures.

A man was walking down the street when he was accosted by a particularly dirty and shabby-looking homeless man who asked him for a couple of dollars for dinner. The man took out his wallet, extracted ten dollars and asked, "If I give you this money, will you buy some beer with it instead of dinner?" "No, I had to stop drinking years ago," the homeless man replied. "Will you use it to gamble instead of buying food?" the man asked. "No, I don't gamble," the homeless man said. "I need everything I can get just to stay alive." "Will you spend this on greens fees at a golf course instead of food?" the man asked. "Are you NUTS!" replied the homeless man. "I haven't played golf in 20 years!" "Will you spend the money on a woman in the red light district instead of food?" the man asked. "What disease would I get for ten lousy bucks?" exclaimed the homeless man. "Well," said the man, "I'm not going to give you the money. Instead, I'm going to take you home for a terrific dinner cooked by my wife." The homeless man was astounded. "Won't your wife be furious with you for doing that? I know I'm dirty, and I probably smell pretty disgusting." The man replied, "That's okay. It's important for her to see what a man looks like after he has given up beer, gambling, golf, and sex."