NEWS FROM THE BREWERY! Head brewer, Michael Gaetz, reports our seasonally available BLACKBERRY MEAD is almost gone! MISSILETOW ALE, ARCTIC DARK, CHINOOK ESB, and MANGO CHERRY FRUIT BEER are now on tap. There are batches of PICKARD’S OATMEAL STOUT, TWO SON'S MILK STOUT, FLEK’S CZECH DARK LAGER, and THE BOW PROJECT AMARILLO S.M.A.S.H. are working their way through the brewery. Our GUEST TAP is currently pouring a very small keg of Duchesse de Bourgogne Flanders Red Ale from Belgium. Next up is the brand new Black Bridge Winter Warmer which will be followed by the Andromeda Imperial IPA from Saskatoon’s Paddock Wood Brewery. Our February premium wine features are the ENIGMA WINES from California. The white is a Chardonnay and the red is a Cabernet Sauvignon. Both are $7.95 for a glass and $21.95 for a half litre. 650 ml glass bottles of our number one selling DUNGARVON IRISH RED ALE are currently available at ALL SIX SLGA stores including the Normanview, Quance Street, Broadway Avenue, North Albert Street, Dewdney & Lewvan and South Albert locations! ATTENTION SASKATOON RESIDENTS! You can now find our Dungarvon in bottles as well as on tap at the Growler Filling Station in the Saskatoon Metro Liquor store! 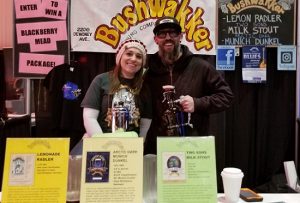 Much thanks to our staff who took care of the Bushwakker booth at last weekend’s Beer Bacon Bands Festival. Interesting to see how our summertime light and refreshing Lemon Radler was such a popular brew in the dead of winter!

Feb. 1: FIRST FIRKIN FRIDAY. A decades-old Bushwakker tradition! A piper from the Regina Police Services Pipes and Drums leads a keg of special brew in a procession throughout the brewpub. A guest volunteer is selected to wield the handmade wooden maul affectionately referred to as The Mighty Firkin Wakker, and attempt to tap the firkin in one mighty blow. Our February Valentine’s month firkin offering will be a Chocolate Raspberry Milk Stout. The delicious suds-soaking experience takes place at 5:30 PM. Feb. 4: Monday Night Jazz & Blues. THE MINISTRY OF GROOVE. 1970’S jazz funk and more. Love that horn section! 8:00 PM. Feb. 6: Wednesday Night Folk. BRADFORD. Talented acoustic duo featuring Brad Papp and Mark Radford. Please note that due to the Sask Archives event, the show will start at 9:00 PM rather than 8:00 PM. 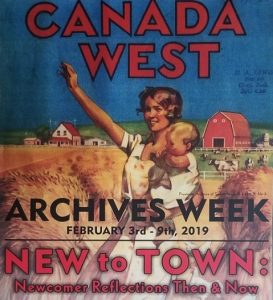 Feb. 6: SASK ARCHIVES NIGHT - ‘New to Town: Newcomer Reflections Then & Now.’ Presented by the Provincial Archives of Saskatchewan as part of Archives Week 2019. Join us for a "Spotlight on the Past" evening where guest speakers reflect on their transitions to life in Saskatchewan including readings on the Settler Experience, the Regina College Campus, and other stories. CJME’s Sarah Mills will be event MC. Presenters include: Frank Korvemaker, Livia Castellanos and Faycal Haggul. Archives Week showcases the role that archives and archivists play in preserving and making available Saskatchewan's documented heritage. 7:00 PM. Feb. 6: MONTHLY ALES MEETING. If you are looking to improve your skills as a homebrewer or just want to sit in a room filled with people who have a passion for creating great beer in the basement, then the ALES Club is for you! This month’s discussion topic will be European Lagers. Meetings are held in the Bushwakker basement clubroom on the first Wednesday of each month at 8:00 PM. New members are always welcome. Feb. 11: Monday Night Jazz & Blues. THE JAZZ BAND-ITS. The largest band to ever grace the Bushwakker stage plays big band, jazz and swing – loud and proud! 8:00 PM. Feb. 13: Wednesday Night Folk. THE STRANGE VALENTINES. A special pre-Valentine’s Day show featuring an Australian and a Nova Scotian who sing about the jerks in the world. Strange love indeed! 8:00 PM. Feb. 14: BUSHWAKKER VALENTINE’S SWEETHEART DINNER. Fancy-schmancy restaurants may be the choice destination for some young lovers. Others who prefer great value and delicious food in a comforting and cozy setting often prefer to enjoy their Valentine’s experience with us. Bushwakker executive chef, Mike Monette, will offer a Classic Valentine Dinner Feature which is sure to impress. This year we will offer BEEF WELLINGTON with an optional CRÈME BRULEE dessert feature. Reservations accepted! Feb. 18: FAMILY DAY. Open from noon to nine. Feb. 20: Wednesday Night Folk. TONGUE JUNGLE. Regina duo featuring two part harmonies, fun times and memorable songs. 8:00 PM. Feb. 21: HEALTH SCIENCE PUB – Who’s in Charge Here? Tales from the Pasqua Hospital. Our wildly popular Science Pub Series has returned for a seventh incredible season! Enjoy lectures on scientific topics of general interest in our Arizona Room (main floor banquet room) over beer and snacks. The room opens at 5:00 PM and quite often is full by 6:00 PM. Avoid disappointment and come down early for dinner and a pint before the presentation which begins at 7:00 PM. This month’s lecture will be presented by Dr. Ron Taylor from the Saskatchewan  Health Authority and  Ms. Alison Hamilton who is a Patient and Family Advisor. Questions which may be addressed include: what is normal hospital care, what is an ACU and why should anyone care, what did the Pasqua do, what does this mean to patients/ families and where might this all go? Feb. 25: Monday Night Jazz & Blues - special Mid-Winter Blues Festival edition. TERRAPLANE. Talented blues band lead by Regina’s friendliest bluesman returns for a long overdue performance. 8:00 PM. Feb. 27: Wednesday Night Folk – special Mid-Winter Blues Festival edition. A STORRY WITH HUGHES. Talented rockin’ acoustic blues duo featuring Jeff Storry and Billy Hughes. 8:00 PM.

Cannabis and the Beer Industry

TIME OUT– the skill testing question

You are driving in a car at a constant speed. On your left side is a valley and on your right side is a fire engine traveling at the same speed as you. In front of you is a galloping pig which is the same size as your car and you cannot overtake it. Behind you is a helicopter flying at ground level. Both the giant pig and the helicopter are also traveling at the same speed as you. What must you do to safely get out of this highly dangerous situation? Don't ride the kiddie Merry-Go-Round when you are drunk!