NEWS FROM THE BREWERY! Head brewer, Michael Gaetz, reports our seasonally available BLACKBERRY MEAD, MISSILETOW ALE, ARCTIC DARK, CHINOOK ESB, and MANGO CHERRY FRUIT BEER are now on tap. There are batches of PICKARD’S OATMEAL STOUT, TWO SON'S MILK STOUT, FLEK’S CZECH DARK LAGER and AMARILLO S.M.A.S.H. are working their way through the brewery. ABSOLUTE LAST CHANCE FOR BUSHWAKKER PRIME RIB WEEKENDS! Our melt-in-your-mouth, low-and-slow roasted prime rib dinners with jumbo Yorkshire pudding will only be here until January 27th! Available all day and night Friday and Saturday and beginning at 5:00 PM on Sunday. Choose from either an 8 oz. or a 10 oz. cut. Prime rib is definitely one of Bushwakker executive chef Mike’s specialties. Our GUEST TAP is currently pouring a very small keg of Duchess de Bourgogne Flanders Red Ale from Belgium. Next up is the brand new Black Bridge Winter Warmer which will be followed by the Andromeda Imperial IPA from Saskatoon’s Paddock Wood Brewery. Our January premium red wine feature is the Johnny Q Cabernet Sauvignon from Australia. The premium white wine is the Ventiquero Root 1 Sauvignon Blanc from Chile. Both are $7.95 for a glass and $21.95 for a half litre. 650 ml glass bottles of our number one selling DUNGARVON IRISH RED ALE are currently available at ALL SIX SLGA stores including the Normanview, Quance Street, Broadway Avenue, North Albert Street, Dewdney & Lewvan and South Albert locations! 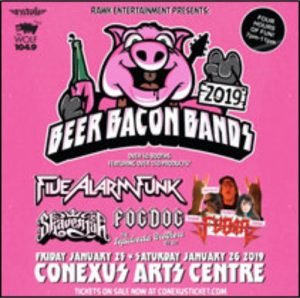 Jan 25 & 26: BEER BACON BANDS. If you enjoy beer and great live music then don't miss out on one of the biggest parties of the winter! Three of the greatest things in life rolled up into one sudsy, salty night - a beer fest, a bacon fest and a music festival all in one! Be sure to stop by the Bushwakker booth and try this year’s festival offerings! 7:00 – 11:00 PM. Jan 26: BUSHWAKKER 28th - ROBERT BURNS 260th BIRTHDAY BASH. Join us as we celebrate well over a quarter century of award-winning beer and pub cuisine as well as Scotland’s favourite son, Robbie Burns! Live rollicking reels with Squeeze of Scotch and The Regina Police Services Pipes & Drums, highland dancing, FREE HAGGIS, NEEPS and BIRTHDAY CAKE, the tapping of the “Scottish” birthday firkin, plus Burns poetry and historical overview from Saskatchewan author and playwright, Ken Mitchell. A great way to shake those January blahs. The dance floor will be open! $5 cover charge in effect. 6:00 PM. 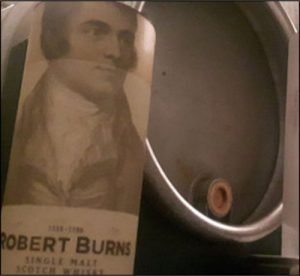 A very special firkin of Ilse of Arran Distillery Robert Burns single malt scotch whiskey – infused Robertson Strong Scottish Ale will be piped in and tapped at 6:00 PM to kick off the annual Bushwakker/Robbie Burns Birthday Bash. Jan. 28: Monday Night Jazz & Blues. HENDRICKSEN n’ SON. Jazz standards and Broadway show tunes from father and son act. 8:00 PM. Jan. 30: Wednesday Night Folk. JAMES IRVING. Frontman from veteran local act, Nickletree, delivers roots rock. 8:00 PM. Feb. 1: FIRST FIRKIN FRIDAY. A decades-old Bushwakker tradition! A piper from the Regina Police Services Pipes and Drums leads a keg of special brew in a procession throughout the brewpub. A guest volunteer is selected to wield the handmade wooden maul affectionately referred to as The Mighty Firkin Wakker, and attempt to tap the firkin in one mighty blow. Our February Valentine’s month firkin offering will be a Chocolate Raspberry Milk Stout. The delicious suds-soaking experience takes place at 5:30 PM. Feb. 4: Monday Night Jazz & Blues. THE MINISTRY OF GROOVE. 1970’S jazz funk and more. Love that horn section! 8:00 PM. Feb. 6: SASK ARCHIVES NIGHT - ‘New to Town: Newcomer Reflections Then & Now’ Presented by the Provincial Archives of Saskatchewan as part of Archives Week 2019. Join us for a "Spotlight on the Past" evening where guest speakers reflect on their transitions to life in Saskatchewan including readings on the Settler Experience, the Regina College Campus, and other stories. CJME’s Sarah Mills will be event MC. Presenters include: Frank Korvemaker, Livia Castellanos and Faycal Haggul. Archives Week showcases the role that archives and archivists play in preserving and making available Saskatchewan's documented heritage. 7:00 PM. Feb. 6: Wednesday Night Folk. BRADFORD. Talented acoustic duo featuring Brad Papp and Mark Radford. Please note that due to the Sask Archives event, the show will start at 9:00 PM rather than 8:00 PM. Feb. 11: Monday Night Jazz & Blues. THE JAZZ BAND-ITS. The largest band to ever grace the Bushwakker stage plays big band, jazz and swing – loud and proud! 8:00 PM. Feb. 13: Wednesday Night Folk. THE STRANGE VALENTINES. A special pre-Valentine’s Day show featuring an Australian and a Nova Scotian who sing about the jerks in the world. Strange love indeed! 8:00 PM. Feb. 14: BUSHWAKKER VALENTINE’S SWEETHEART DINNER. Fancy-schmancy restaurants may be the choice destination for some young lovers. Others who prefer great value and delicious food in a comforting and cozy setting often prefer to enjoy their Valentine’s experience with us. Bushwakker executive chef, Mike Monette, will offer a special Valentine Dinner Feature which is sure to impress. Reservations accepted! Feb. 18: FAMILY DAY. Open from noon to nine. Feb. 20: Wednesday Night Folk. TONGUE JUNGLE. Regina duo featuring two part harmonies, fun times and memorable songs. 8:00 PM.
2019 Trends in Craft - By: Jim Dykstra
Craft beer in 2018 was largely defined by consolidation. While the consolidation of craft brands is not a new story, the past year saw many brands consolidate product lines and distribution footprints. This is a more conservative tack than we’ve seen in years past, and it can be seen as a direct result of increased competition. Many brands were forced to scale back ambitious growth plans, lest they end up like Green Flash, which went from a Brewers Association Top 50 brewery to foreclosure in a matter of months. Though this means less large-scale regional and national brewing operations, the general implications for the craft ecosystem are positive. For one, breweries are resorting less to clogged and monopolized retail channels in favor of taproom sales, which will encourage the community aspect at the heart of craft. Further, reducing SKUs will allow for more focused production and, ideally, better beer. Given the surplus of brands versus shelf space, the consumer won’t notice a difference in the number of brands to choose from. Demographically, things are looking up for craft. No longer just a sanctuary for real-life versions of The Simpsons’ Comic Book Guy, women now comprise 32 percent of the overall craft beer market, with the 21-34 subset representing 15 percent of total craft drinking volume, according to a Revel Systems report. Further, the report indicates that craft beer drinking among the Hispanic demographic is projected to grow by 31 percent this year. The coming year’s potential to focus on lighter, more palatable styles should serve to bring in more new beer drinkers, as well as the growth of hard soda and seltzer categories. With these demographic shifts come new ideas, new taste preferences and new drinking attitudes, which we may see filter back into the entirety of the craft drinking population. Breweries are resorting less to clogged and monopolized retail channels in favor of taproom sales, which will encourage the community aspect at the heart of craft. Millennials remain firm as craft’s strongest proponents, comprising 58 percent of the craft drinking constituency. As the majority, this group will largely dictate what styles become popular and what methods of packaging, branding and sales are successful. So, for those in the industry, this is an important group to consider when making business decisions. As we have seen, A-list hop brands have been on the rise as consumers clamor for juicy, tropical Hazy IPAs. Overall hop production is up slightly from last year, but the race for the big names like Ekuanot or Galaxy makes it tough for smaller breweries to acquire them at an affordable rate. So, when shelling out for these marquis bits of lupulin, be confident that the end product will justify the cost. Given the highly competitive nature of a 7000+ brewery climate, knowing what you do and don’t do well will go a long way. Last year’s industry outlook emphasized the value in focusing on specific styles and learning to do more within their stylistic confines, if not redefining them entirely. 2019 will weed out breweries producing anything less than great, consistent product, and having a focused stylistic wheelhouse will increase the odds of standing out.
Branding in 2019 Speaking of standing out, there is simply no excuse for anything less than stellar branding at this stage in the game.

We are delighted to have Squeeze of Scotch return to perform at the Bushwakker/Robbie Burns Birthday Bash after a long hiatus.

A man was sitting on the edge of the bed, observing his wife, looking at herself in the mirror. Since her birthday was not far off he asked what she'd like to have for her Birthday. "I'd like to be six again", she replied, still looking in the mirror. On the morning of her Birthday, he arose early, made her a nice big bowl of Lucky Charms, and then took her to Six Flags theme park. What a day! He put her on every ride in the park; the Death Slide, the Wall of Fear, the Screaming Monster Roller Coaster, everything there was. Five hours later they staggered out of the theme park. Her head was reeling and her stomach felt upside down. He then took her to a McDonald's where he ordered her a Happy Meal with extra fries and a chocolate shake. Then it was off to a movie, popcorn, a soda pop, and her favorite candy, M&M's. What a fabulous adventure! Finally she wobbled home with her husband and collapsed into bed exhausted. He leaned over his wife with a big smile and lovingly asked, "Well dear, what was it like being six again?" Her eyes slowly opened and her expression changed, "I meant my dress size, you dumb ass!"