NEWS FROM THE BREWERY! Head brewer, Michael Gaetz, reports our seasonally available BLACKBERRY MEAD, MISSILETOW ALE, ARCTIC DARK, CHINOOK ESB, and MANGO CHERRY FRUIT BEER are now on tap. A batch of PICKARD’S OATMEAL STOUT, TWO SON'S MILK STOUT and FLEK’S CZECH DARK LAGER are working their way through the brewery. LAST CHANCE FOR BUSHWAKKER PRIME RIB WEEKENDS! Our melt-in-your-mouth, low-and-slow roasted prime rib dinners with jumbo Yorkshire pudding will only be here until January 27th! Available all day and night Fridays and Saturdays and beginning at 5:00 PM on Sundays. Choose from either an 8 oz. or a 10 oz. cut. Prime rib is definitely one of Bushwakker executive chef Mike’s specialties. Our GUEST TAP is currently pouring the Cranberry Kettle Sour from Regina’s Pile O’ Bones Brewing. Next up we will tap a very small keg of Duchess de Bourgogne Flanders Red Ale from Belgium. Following that the brand new Black Bridge Winter Warmer will be flowing. Our January premium red wine feature is the Johnny Q Cabernet Sauvignon from Australia. The premium white wine is the Ventiquero Root 1 Sauvignon Blanc from Chile. Both are $7.95 for a glass and $21.95 for a half litre. 650 ml glass bottles of our number one selling DUNGARVON IRISH RED ALE are currently available at ALL SIX SLGA stores including the Normanview, Quance Street, Broadway Avenue, North Albert Street, Dewdney & Lewvan and South Albert locations! The BUSHWAKKER LOCAL ARTIST WALL for the month of January features the works of ALEX BEITZ. Alex is a local visual artist whose work varies in medium and subjects. His “Pet Portraits” have been very popular. He obtained his art education by taking many classes at the Neil Balkwill Civic Arts Centre and participation with various art guilds. Over the past seven years Alex has been working as a picture framer where he is fortunate to work with a variety of artists and collectors from Regina and southern Saskatchewan. Alex has shown his work with the Regina Federation of Artists, Brushworks Art Guild and the Art Gallery of Regina and is happy to be returning to the Local Artists Wall at Bushwakker. 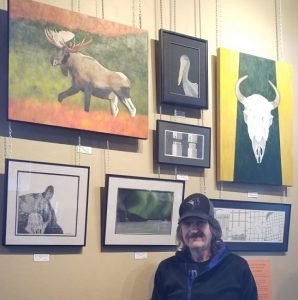 Jan. 14: Monday Night Jazz & Blues. THE JAZZ BAND-ITS. The largest band to grace the Bushwakker stage plays big band, jazz and swing. 8:00 PM. Jan. 16: Wednesday Night Folk. LADIES OF THE PRAIRIE AND THE MALE ORDER BAND. Three part female harmonies, guitar, banjo, steel guitar, mandolin and more! 8:00 PM. Jan. 17: SCIENCE PUB - Water in a Dry Land: Prairie Aquatic Ecosystems Under a Changing Climate. Our wildly popular Science Pub Series has returned for a seventh incredible season! Enjoy lectures on scientific topics of general interest in our Arizona Room (main floor banquet room) over beer and snacks. The room opens at 5:00 PM and quite often is full by 6:00 PM. Avoid disappointment and come down early for dinner and a pint before the presentation which begins at 7:00 PM. This month’s lecture will be presented by Dr. Kerri Finlay from the Faculty of Science at the University of Regina. The Canadian prairies are defined by a landscape of grasslands and few aquatic resources. As such, the potential impacts of climate change on water quantity and quality is of great concern. Intriguingly, prairie water bodies may also play a role in regulating climate change, as they have been demonstrated to act as carbon sinks. In this talk, I will discuss the potential impacts of climate change on aquatic ecosystems in the prairies, but also how prairie lakes and reservoirs may be in turn mitigating climate change. 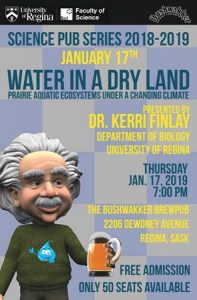 Jan. 21: Monday Night Jazz & Blues. A STORRY WITH HUGHES. Rockin’ acoustic blues duo featuring Jeff Storry & Billy Hughes. 8:00 PM. Jan. 23: Wednesday Night Folk. THE ACCOMPLICE. Innovative one-man band delivers Grammy recognizable rock songs. 8:00 PM. Jan 25 & 26: BEER BACON BANDS. If you enjoy beer and great live music then don't miss out on one of the biggest parties of the winter! Three of the greatest things in life rolled up into one sudsy, salty night - a beer fest, a bacon fest and a music festival all in one! Be sure to stop by the Bushwakker booth and try this year’s festival offerings! 7:00 – 11:00 PM. Jan 26: BUSHWAKKER 28th/ROBERT BURNS 260th BIRTHDAY BASH. Join us as we celebrate well over a quarter century of award-winning beer and pub cuisine as well as Scotland’s favourite son, Robbie Burns! Live rollicking reels with Squeeze of Scotch and The Regina Police Services Pipes & Drums, highland dancing, FREE HAGGIS, NEEPS and BIRTHDAY CAKE, the tapping of the “Scottish” birthday firkin, plus Burns poetry and historical overview from Saskatchewan author and playwright, Ken Mitchell. A great way to shake those January blahs. The dance floor will be open! $5 cover charge in effect. 6:00 PM. Jan. 28: Monday Night Jazz & Blues. HENDRICKSEN n’ SON. Jazz standards and Broadway show tunes from father and son act. 8:00 PM. Jan. 30: Wednesday Night Folk. JAMES IRVING. Frontman from veteran local act, Nickletree, delivers roots rock. 8:00 PM. Feb. 1: FIRST FIRKIN FRIDAY. Enjoy the pomp and circumstance of this long standing Bushwakker monthly tradition. A piper from the Regina Police Services Pipes and Drums leads a keg of special brew in a procession throughout the brewpub. A guest volunteer is selected to wield the handmade wooden maul affectionately referred to as The Mighty Firkin Wakker, and attempt to tap the firkin in one mighty blow. The delicious suds-soaking experience takes place at 5:30 PM. Feb. 4: Monday Night Jazz & Blues. THE MINISTRY OF GROOVE. 1970’S jazz funk and more. Love that horn section! 8:00 PM. Feb. 6: SASK ARCHIVES NIGHT - ‘New to Town: Newcomer Reflections Then & Now’ Presented by the Provincial Archives of Saskatchewan as part of Archives Week 2019. Join us for a "Spotlight on the Past" evening where guest speakers reflect on their transitions to life in Saskatchewan including readings on the Settler Experience, the old Regina Campus, and other stories. Archives Week showcases the role that archives and archivists play in preserving and making available Saskatchewan's documented heritage. Activities in communities across the province include celebrity reading events, film nights, open houses, exhibits and more. 7:00 PM.

By Julia Herz I need only type these words for BrewersAssociation.org visitors to know exactly what and who I mean. Maybe you’ve even said the words directly to him. On January 23, 2018 Charlie Papazian announced his planned exit from the Brewers Association (BA), which will occur on January 23, 2019 on the occasion of his 70th birthday and National Pie Day, which he founded. (You knew that, didn’t you?) We were given one year’s time to digest this transition. Woe is me—the year went by too quickly. Charlie’s role as a visionary, homebrewing advocate, author, speaker, beer historian, beer and food guru, and all-around beer sage have had a profound impact on beer. Just Google his name to see. Words in one web post cannot do his contributions justice, although I’m excited to try. His work and presence have shaped association staff thinking, mine included. This is significant because we at the BA, beginning in 2019, will merely follow in his footsteps as opposed to walking the same halls with him. No longer will we regularly get to look across the conference room table or BA bar and into that ever-adventurous glint in his eye. No longer will we get to see his ever-curious smile as he asks questions about our projects, pitches, and communications. This is a big change. Very big. A Living Legend As founder and past president of the Brewers Association, Charlie’s accomplishments surpass those of most living legends, and I don’t type those words lightly. At the base of it all is his joy and his love for homebrewing, which helped jump-start, advance, and grow the U.S. craft brewing movement. In 1978 he founded the American Homebrewers Association (AHA), along with Charlie Matzen, which today has more than 45,000 members. He’s brewed an exponential number of beers, authored hundreds of recipes and articles centric to homebrewing, given many, many beer reviews, written infinite magazine articles and web posts, and granted tens of thousands of interviews. Surely many of you have a copy of The Complete Joy of Homebrewing or one of his other brewing books on your bookshelf, likely dog-eared and creased like mine, riddled with handwritten notes. Examples of his accomplishments include… The National Homebrew Competition (NHC), which over its 40-year history—and still going strong—has evaluated 143,240 beers. The NHC is an annual holy grail, largest beer competition in the world, amazing-to-bag-a-medal event that has allowed homebrewers, many of whom end up becoming professional brewers, to test and up their brewing game. I will always consider bagging a bronze medal for my and my husband’s Old Ale in the 2003 NHC as a career highlight. We all have Charlie and the AHA to thank for that competition and beer feedback opportunity. Charlie also started Zymurgy magazine, which has influenced the brewing approaches and techniques of tens of thousands of homebrewers. What about the Great American Beer Festival? Founded by Charlie. The World Beer Cup? Another Charlie innovation. Via the world-class judging panels at these competitions, the U.S. and world brewing scene is light years beyond where it was in the 1980’s. Simply put, the BA beer competitions have truly advanced brewing and brewers. Ahead of His Time Now as we take a few more sips from the glass of BA history, we can’t help but notice that Charlie has been there in some form or another at most junctures since the 70’s. For example, did you know that Charlie is the person who started the Beer City USA tag that helped put Asheville, N.C. and Grand Rapids, Mich. on the craft beer map, fueling an advance beer culture in many towns that still allows them to tout their Beer City status to this day? This project came along when he was tapped as the national beer examiner for Examiner.com. The website (now defunct) is yet another example of where Charlie was ahead of the curve about what’s next of next with the early use of social media and crowd sourcing to help emerging beer cities gain street cred. It inspired many other current crowdsourced awards, including the present Great American Beer Bars published by CraftBeer.com, the BA beer lover-facing website. He was behind the start of The New Brewer magazine, the journal of the Brewers Association. Haven’t seen it? It’s mailed every other month, not via subscription, but via membership to the BA. The New Brewer has inspired and informed tens of thousands of professional brewers since 1983. Charlie has been penning his magazine column from almost the very beginning. Well, batten down the hatches, because starting in 2019 BA members and the twenty thousand plus readership are going to have to get used to not reading his words on the pages. This is just the tip of the iceberg, one of the many voids we will notice when he steps away. Thank you, Charlie.

Did you ever wonder why there are no dead penguins on the ice in Antarctica? Where do they all go? Wonder no more! It is a known fact that the penguin is a very ritualistic bird and lives an extremely ordered and complex life. Penguins are extremely committed to their family and will mate for life, as well as maintain a form of compassionate contact with their offspring throughout the remainder of their life. If a penguin is found dead on the ice surface, other members of the family and their social circle have been known to dig holes in the ice, using only their vestigial wings and beaks, until the hole is deep enough for the dead bird to be rolled into, and buried. After packing the ice back in the hole, the male penguins then gather in a circle around the fresh grave and sing: "Freeze a jolly good fellow. Freeze a jolly good fellow."