The Bushwakker management and staff would like to thank  you for your incredible enthusiastic support over the past years and wish you good health, success and happiness in 2019! 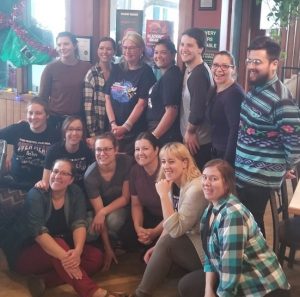 NEWS FROM THE BREWERY! Head brewer, Michael Gaetz, reports our seasonally available BLACKBERRY MEAD, MISSILETOW CHRISTMAS ALE, ARCTIC DARK LAGER and CHICO LIGHT SESSION IPA are now on tap. A batch of, CHINOOK  ESB and FLEK’S CZECH MUNICH DUNKEL are working their way through the brewery. Bushwakker Prime Rib Weekends Have Returned! Our melt-in-your-mouth, low-and-slow roasted prime rib dinners with jumbo Yorkshire pudding are back for the winter season! Available all day and night Fridays and Saturdays and beginning at 5:00 PM on Sundays. Choose from either an 8 oz. or a 10 oz. cut. Prime rib is definitely one of Bushwakker executive chef Mike’s specialties. Our GUEST TAP is currently pouring a Sherry Barrel-Aged Dunkel from Regina’s District Brewing. Next up is the CooCoo Cocoa Milk Stout from Regina’s Malty National Brewing. This will be followed by a very small keg of Duchess de Bourgogne Flanders Red Ale from Belgium. Our December premium red wine feature is the Santa Julia Reserva Malbec from Argentina; $9.50 for a glass and $26.95 for a half litre. The premium white wine is the Bree Riesling from Germany; $8.50 for a glass and $23.95 for a half litre. 650 ml glass bottles of our number one selling DUNGARVON IRISH RED ALE are currently available at ALL SIX SLGA stores including the Normanview, Quance Street, Broadway Avenue, North Albert Street, Dewdney & Lewvan and South Albert locations!

Dec. 31: Nothing For New Year's 13. Regina’s biggest non-event of the year returns! Over a decade ago we offered you a simple formulated event and you loved it. No noise makers, no escalated drink prices, no cover charge, no midnight champagne, no dancing, no line-ups, no hassle, no problem! Come spend a relaxing evening at the good 'ol Bushwakker as we welcome 2019. Perhaps try Chef Mike's special prime rib and jumbo Yorkshire pudding New Year's Eve dinner. What a meal to finish off the year! Hurry and make your dinner reservation today! 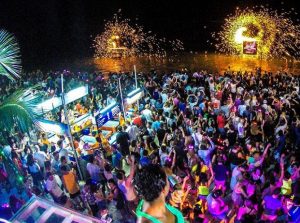 If you are expecting the 13th Annual Bushwakker Nothing For New Year’s event to resemble this scene, you will be sorely disappointed. But if you are looking for a relaxing evening to bring in 2019, come join us!   Jan. 1: CLOSED FOR THE HOLIDAY. Happy New Year! Best wishes for good health and happiness in 2019! Jan. 2: Wednesday Night Folk. THE RED WAGON GYPSIES. Acapella/acoustic harmonies from Angela Ell and Tamara Scrimbit. It doesn’t get “folkier” than this! 8:00 PM. Jan. 2: MONTHLY ALES MEETING. So you received a shiny new home brewing kit for Christmas but want to make sure you produce some top quality suds? Be sure to sit in on a meeting with some of the most enthusiastic homebrewers in the city and learn a thing or two on how to take your homebrewing skills to the next level. New members are always welcome. This month’s presentation topic will be Stouts. Meetings are held in the Bushwakker basement clubroom on the first Wednesday of the month at 8:00 PM. Jan. 4: FIRST FIRKIN FRIDAY. Kick off your new year with a “bang!” Enjoy the pomp and circumstance of this long-standing Bushwakker monthly tradition. A keg of special beer is paraded throughout the brewpub in a procession led by a piper from The Regina Police Service Pipes & Drums. A volunteer is selected to wield the handmade wooden maul affectionately called The Mighty Firkin Wakker and attempt to tap the firkin in one mighty blow. This month’s firkin will be a brand new offering – a Centennial dry-hopped Arctic Dark Lager. 5:30 PM. Jan. 6: CLOSED FOR OUR STAFF CHRISTMAS PARTY Jan. 7: Monday Jazz & Blues. WHITEBOY SLIM. We received the sad news that this talented national award-winning blues artist and fine gentleman passed away on December 19th. Our sincere condolences to Maurice's family and friends. Jan. 9: Wednesday Night Folk – special edition. WINTER SINGER/ SONGWRITER SHOWCASE. Veteran wordsmith, Neil Child, is joined by David Malloy, Dustin Ritter, Devon Floyd, Trent Leggott and Albert Strangeman! 8:00 PM. Jan. 14: Monday Night Jazz & Blues. THE JAZZ BAND-ITS. The largest band to grace the Bushwakker stage plays big band, jazz and swing. 8:00 PM. Jan. 16: Wednesday Night Folk. LADIES OF THE PRAIRIE AND THE MALE ORDER BAND. Three part female harmonies, guitar, banjo, steel guitar, mandolin and more! 8:00 PM. Jan. 17: SCIENCE PUB - Water in a Dry Land: Prairie Aquatic Ecosystems Under a Changing Climate. Our wildly popular Science Pub Series has returned for a seventh incredible season! Enjoy lectures on scientific topics of general interest in our Arizona Room (main floor banquet room) over beer and snacks. The room opens at 5:00 PM and quite often is full by 6:00 PM. Avoid disappointment and come down early for dinner and a pint before the presentation which begins at 7:00 PM. This month’s lecture will be presented by Dr. Kerri Finlay from the Faculty of Science at the University of Regina. Jan. 21: Monday Night Jazz & Blues. A STORRY WITH HUGHES. Rockin’ acoustic blues duo featuring Jeff Storry & Billy Hughes. 8:00 PM. Jan 26: BUSHWAKKER 28th/ROBERT BURNS 260th BIRTHDAY BASH. Join us as we celebrate well over a quarter century of award-winning beer and pub cuisine as well as Scotland’s favourite son, Robbie Burns! Live rollicking reels with A Squeeze of Scotch and The Regina Police Services Pipes & Drums, highland dancing, FREE HAGGIS, NEEPS and BIRTHDAY CAKE, the tapping of the “Scottish” birthday firkin, plus Burns poetry and historical overview from Saskatchewan author and playwright, Ken Mitchell. A great way to shake those January blahs. The dance floor will be open! $5 cover charge in effect. 6:00 PM. Jan. 28: Monday Night Jazz & Blues. HENDRICKSEN n’ SON. Jazz standards and Broadway show tunes from this father and son act. 8:00 PM. Jan. 30: Wednesday Night Folk. JAMES IRVING. Frontman from veteran local act, Nickletree, delivers roots rock. 8:00 PM.

2018 year in craft beer highlighted by milestone brewery numbers, economic impact Boulder, Colo. – As craft brewers continue to make waves in an evolving market, the Brewers Association—the not-for-profit trade association dedicated to small and independent American brewers—looked back on the craft brewing community’s contributions, highlights, and defining beer moments of the past year. “The brewing landscape is shifting, yet small and independent breweries continue to find market success,” said Julia Herz, craft beer program director, Brewers Association. “Brewers are finding ways to differentiate themselves in a competitive market, become pillars of communities, and embrace new experiences and occasions to connect with beer lovers.” Continued Growth: 5% growth. With stable and steady mid-year growth, craft beer sales by volume will once again reach a new high in 2018. Economic Impact: 500,000 Jobs. Craft beer’s job impact. A 9% increase over 2017. $76.2 Billion. Craft brewers’ contribution to the U.S. economy in 2017. An 11% increase of 2016. Brewery Record Count: More than 7000 breweries operated in the United States in 2018, on pace for a 20% increase over 2017. Certified Independent: 4000+ Brewing Companies. Adopted the independent seal, representing more than 85% of the craft beer brewed in the U.S. Community Hubs: 85% of 21+ adults live within 10 miles of a brewery. It’s easier than ever to tour or visit a local brewery. Investing in the Future: 95% Reinvesting. Craft brewers are reinvesting their tax savings from a recalibrated federal excise tax on beer to; purchase new equipment, hire new employees, increase employee benefits and increase charitable contributions. The Haze Craze: 391 Beer Entries. The most entered category in the 2018 Great American Beer Festival competition was the Juicy or Hazy IPA. Just Brew It: 1.1 Million Homebrewers. Over 1 million homebrewers produced more than 1.4 million barrels of beer, equal to 1% of total U.S. beer production. Of note in 2018: • Stable and Steady: The craft brewing industry continues to grow. The Brewers Association’s mid-year survey measured 5 percent growth by volume, and although there have been signs of slightly slower growth in the second half of the year, it is clear that craft beer sales will once again reach a new high in 2018. • Big Impact from Small Breweries: As craft’s market share has grown, so has its economic impact, which totals more than $76 billion. The craft brewing community is responsible for 500,000 jobs, with more than 135,000 of those directly at breweries and brewpubs. • 7,000 Strong and Growing: The number of breweries in the United States hit yet another all-time high in 2018, eclipsing 7,000 at the end of October. Although the final numbers are still being compiled, there will potentially be 1,000 openings in 2018. • #SeektheSeal: More than 4,000 craft brewing companies have adopted the independent craft brewer seal since its inception in June 2017, representing 85 percent of the volume of craft beer brewed. Beer lovers are encouraged to #SeektheSeal via the Brewers Association’s first-ever national advertising campaign That’s Independence You’re Tasting. • Community Hubs:85 percent of 21+ adults live within 10 miles of a brewery. The continued growth in breweries means that more communities have a local brewery and it is easier than ever to tour or visit one. • Investing in the Future: Craft brewers are putting their savings from a recalibrated federal excise tax to work through economic development, new hires, increased employee benefits and pay, and increased charitable contributions. • The Haze Craze: The Brewers Association added three juicy or hazy styles to its Beer Style Guidelines and Great American Beer Festival® competition in 2018, resulting in a record number of entries.  Additionally, brewers continue to innovate and create emerging styles that offer new opportunities to connect with a diverse audience of beer lovers. • Just Brew It: It’s estimated that 1 million homebrewers in the U.S. brewed 1.4 million barrels of beer, equal to 1 percent of U.S beer production.

- A New Year's resolution goes in one year and out the other. - My new year's resolution is to be more optimistic by keeping my cup half-full with either rum, whiskey or beer. - My New Year's resolution is to stop hanging out with people who ask me about my New Year's resolutions. - If you’re born in September, it’s pretty safe to assume your parents started out the New Year with a Bang! - May all your troubles last as long as your New Year resolutions. - Dear creator, my prayer for 2018 is a FAT bank account and a THIN body. Please don't mix it up like you did this year. - My 2019 resolution is for everyone else to gain the 50 pounds I refuse to lose. - People treat New Year's like some sort of life-changing event. If your life sucked last year, it's probably still going to suck tomorrow.
Our Weekend Prime Rib & Giant Yorkie Special Returns: 8 oz - $22.95 & 10 oz - $26.95.
Soup & Sandwich Special is $13.95.  All hot specials are $16.95, except where noted, & include a serving of soup du jour, house, or Caesar salad.     We strive to ensure all weekly specials and soups are made available. Product shortages or unforeseen circumstances may result in modification or even substitution of certain featured menu items.