NEWS FROM THE BREWERY! Head brewer, Michael Gaetz, reports our seasonally available BLACKBERRY MEAD, MISSILETOW CHRISTMAS ALE, KAI’S MUNICH HELLES and CHICO LIGHT SESSION IPA are now on tap. A batch of CHINOOK ESB and FLEK’S CZECH MUNICH DUNKEL are working their way through the brewery. Bushwakker Prime Rib Weekends Have Returned! Our melt-in-your-mouth, low-and-slow roasted prime rib dinners with jumbo Yorkshire pudding are back for the winter season! Available all day and night on Fridays and Saturdays and beginning at 5:00 PM on Sundays. Choose from either an 8 oz. or a 10 oz. cut. Prime rib is definitely one of Bushwakker executive chef Mike’s specialties. Our GUEST TAP is currently pouring the Brier Park New England Pale Ale from the Medicine Hat Brewing Company. This is the new home of former Bushwakker head brewer, Mitch Dalrymple. Next up is the Fallen Angel Belgian Golden Strong frim Saskatoon’s Paddock Wood Brewery which will be followed by a Sherry Barrel-Aged Dunkel from Regina’s District Brewing. Our December premium red wine feature is the Santa Julia Reserva Malbec from Argentina; $9.50 for a glass and $26.95 for a half litre. The premium white wine is the Bree Riesling from Germany; $8.50 for a glass and $23.95 for a half litre. 650 ml glass bottles of our number one selling DUNGARVON IRISH RED ALE are currently available at ALL SIX SLGA stores including the Normanview, Quance Street, Broadway Avenue, North Albert Street, Dewdney & Lewvan and South Albert locations! Much thanks to Taryn Snell at Picturesk Media for creating a fun video which covered our 2018 Blackberry Mead Release Day festivities. Follow the link to view the video or you can view it on the Bushwakker website homepage or Facebook page.  https://www.facebook.com/TheBushwakker/videos/307898759819610/ 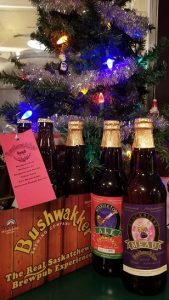 Bushwakker Gift Ideas for the Craft Beer Enthusiast on Your List. We still have some 2018 Bushwakker Blackberry Mead commemorative t-shirts left. Bushwakker Growler Gift Boxes include your choice of a glass or insulated black stainless steel Bushwakker Joe Fafard growler, two pint glasses and a gift certificate redeemable for a growler fill. Our Christmas Variety Six-Pack includes some of our seasonal and specialty offerings including bottles of Blackberry Mead and Missiletow Christmas Ale (available December 9th), our ornate fancy Hop Handle Growler Christmas Package with 2 Glasses and a Growler Fill is also back by popular demand…and you can’t go wrong with a Bushwakker gift card!

Dec. 17: Monday Night Jazz & Blues: THE MINISTRY OF GROOVE. Powerful 1970’s jazz funk and more including a performance their original tune, Blackberry Mead! 8:00 PM. Dec. 19: Wednesday Night Folk – special HOME FOR THE HOLIDAYS SASKATCHEWAN SONGWRITERS EDITION. SaskMusic and the Regina Songwriter’s Association present Glenn Sutter, Jaecy Bells and Wanda Gronhovd delivering holiday favourites and original compositions. 8:00 PM. Dec. 24: CHRISTMAS EVE. Open from 11:00 AM – 5:00 PM. Be sure to pick up your Bushwakker Holiday Six-Pack. Dec. 25: CLOSED. Merry Christmas! Dec. 26: Wednesday Night Folk. BUSHWAKKER BOXING DAY ROCKIN’ BLUES BASH! CALL ME MILDY delivers powerful blues/rock, slide & harmonica blues peppered with reggae-laden melodies. 8:00 PM. Dec. 31: Nothing For New Year's 13. Regina’s biggest non-event of the year returns! Over a decade ago we offered you a simple formulated event and you loved it. No noise makers, no escalated drink prices, no cover charge, no midnight champagne, no dancing, no line-ups, no hassle, no problem! Come spend a relaxing evening at the good 'ol Bushwakker as we welcome 2019. Perhaps try Chef Mike's special prime rib and jumbo Yorkshire pudding New Year's Eve dinner. What a meal to finish off the year! Hurry and make your dinner reservation today! Jan. 1: CLOSED FOR THE HOLIDAY. Happy New Year! Best wishes for good health and happiness in 2019! Jan. 2: Wednesday Night Folk. THE RED WAGON GYPSIES. Acapella/ acoustic harmonies from Angela Ell and Tamara Scrimbit. It doesn’t get “folkier” than this! 8:00 PM. Jan. 2: MONTHLY ALES MEETING. So you received a shiny new home brewing kit for Christmas but want to make sure you produce some top quality suds? Be sure to sit in on a meeting with some of the most enthusiastic homebrewers in the city and learn a thing or two on how to take your homebrewing skills to the next level. New members are always welcome. This month’s presentation topic will be Stouts. Meeting are held in the Bushwakker basement clubroom on the first Wednesday of the month at 8:00 PM. Jan. 4: FIRST FIRKIN FRIDAY. Kick off your new year with a “bang!” Enjoy the pomp and circumstance of this long-standing Bushwakker monthly tradition. A keg of special beer is paraded throughout the brewpub in a procession led by a piper from The Regina Police Service Pipes & Drums. A volunteer is selected to wield the handmade wooden maul affectionately called The Mighty Firkin Wakker and attempt to tap the firkin in one mighty blow at 5:30 PM. Jan. 7: Monday Jazz & Blues. WHITEBOY SLIM. The largest band to ever grace the Bushwakker stage plays big band, jazz and swing. 8:00 PM.

The BA Insider The rumors of craft’s demise are much exaggerated. Although much of the press in the past year has focused on negative trends or headwinds, broadly craft is still a growing industry well-positioned to provide value for all three tiers. Let’s break down some of the commonly referenced headwinds and why the craft beer category may actually be in a much more positive position than many people realize. Craft Retail Value Although it’s true that craft is no longer growing at the double-digit rates of a few years back, craft has been a consistent growth engine for retailers’ beer sales in an era where the category has remained more static. In the first 40 weeks of 2018 (through Oct. 8, 2018), small and independent craft sales were $2.44 billion in IRI Group scan data (MULO+C, Total U.S.). Even though craft’s growth rate has been slower than in years past, independent craft has still accounted for 20% of total beer dollar sales growth YTD. Taking a longer view shows the incredible value that craft has created at retail. A similar set of craft brands sold $1.99 billion during the same 40 -week period of 2015. So in three years, craft sales have increased in measured off-premise retail channels by more than $450 million dollars! Craft Growth Expected as Consumers Age One common refrain in the beer media these days is that millennials, or the subsequent generation (Gen Z), is going to drink at significantly lower rates than previous generations. These fears stem from growing interest in health and wellness, not to mention the growing prominence of social media chatter about dry January or Sober September. Despite these fears, there is little evidence that legal drinking age adults are enjoying beverage alcohol at lower rates than in the past, and if anything, the demographics suggest that millennials will likely consume more craft as they age. On the first point, the annual Gallup poll found that 63% of adults drink alcoholic beverages in 2018, slightly up from 2017 (62%; margin of error is +/- 4%). Looking back historically at the average since 1985? 63%. If anything, demographics suggest that craft is in a spot to grow in the future as millennials age and have a bit more income in their pockets. Unlike overall beer, craft’s performance improves as consumers age, and 25-34 year-olds have a higher index (consumption relative to their percentage in the population) than 21-24 year-olds. Even 35-44 year-olds have a similar index to 21-24. That suggests that craft has years of growth potential as millennials look to trade up. Cannabis A similar fear is that the growing availability of legalized cannabis is going to cut into beer sales and craft specifically. Again, although there is plenty of chatter about this occurring, and an occasional overly bold headline based on consumer surveys rather than sales data, to date, there is little evidence that cannabis has affected beer sales. In fact, in 2018, looking at state shipments through September versus the previous year, beer shipments are actually the strongest in states where cannabis is recreationally legal, worst in states where cannabis is still fully illegal, and in the middle in states with medicinal cannabis. That holds true whether or not you control for population growth. This is not to say that cannabis won’t have an effect on beverage alcohol in the longer-run, or that it couldn’t already be having some effect now that is being offset by another variable not being controlled for, but there isn’t sharp evidence that recreational legalization is a huge drag on sales. To close, despite a variety of challenges, and growing competition from the large brewers as well as wine and spirits, craft beer remains a growth category built on new flavors, more variety, and a group of loyal consumers. With openings that still far outnumber closings and thousands of breweries-in-planning, future brewers still see opportunities in the space and are willing to bet on it with their businesses. Craft has been a strong driver of a category that has long been a source of profit and foot traffic for retailers of all sizes, and those trends look set to remain in the coming years. 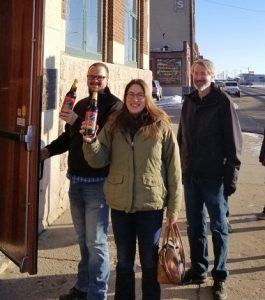 We brewed a double batch of our “Missile”tow Christmas Ale this year! The first people to arrive on release day were Jason and Jamie who were back for their fifth year in a row! The bottles sold out in just a few hours. Fear not!  We will be releasing a second run of “Missile”tow bottles very soon.

What did Santa sing when he went down the chimney? "Chestnuts roasting over an open fire." What do you call a bunch of chess players bragging about their games in a hotel lobby? “Chess nuts boasting in an open foyer.” What do you call Santa if he also lives in the South Pole? Bi-Polar. What do you call buying a piano for the holidays? Christmas Chopin. How many reindeer does it take to change a light bulb? Eight! One to screw in the light bulb and seven to hold Rudolph down!
Our Weekend Prime Rib & Giant Yorkie Special Returns: 8 oz - $22.95 & 10 oz - $26.95.
Soup & Sandwich Special is $13.95.  All hot specials are $16.95, except where noted, & include a serving of soup du jour, house, or Caesar salad. We strive to ensure all weekly specials and soups are made available. Product shortages or unforeseen circumstances may result in modification or even substitution of certain featured menu items.