NEWS FROM THE BREWERY! Head brewer, Michael Gaetz, reports our seasonally available KAI’S MUNICH HELLES, CHICO LIGHT SESSION IPA and BLACKBERRY MEAD are now on tap. A batch of CHINOOK ESB is working its way through the brewery and a double batch of MISSILETOW ALE will become available on tap and in our offsale on Saturday, December 8 at 11:00 AM sharp! Bushwakker Prime Rib Weekends Have Returned! Our melt-in-your-mouth, low-and-slow roasted prime rib dinners with jumbo Yorkshire pudding are back for the winter season! Available all day and night on Fridays and Saturdays and beginning at 5:00 PM on Sundays. Choose from either an 8 oz. or a 10 oz. cut. Prime rib is definitely one of Bushwakker executive chef Mike’s specialties. Our GUEST TAP is currently pouring the Peanut Butter Milk Stout from Regina’s Pile O’ Bones Brewing. Next up is a New England Pale Ale from the Medicine Hat Brewing Company. This is the new home of former Bushwakker head brewer, Mitch Dalrymple. Our December premium red wine feature is the Santa Julia Reserva Malbec from Argentina; $9.50 for a glass and $26.95 for a half litre. The premium white wine is the Bree Riesling from Germany; $8.50 for a glass and $23.95 for a half litre. 650 ml glass bottles of our number one selling DUNGARVON IRISH RED ALE are currently available at ALL SIX SLGA stores including the Normanview, Quance Street, Broadway Avenue, North Albert Street, Dewdney & Lewvan and South Albert locations! Bushwakker Gift Ideas for the Craft Beer Enthusiast on Your List. We still have some 2018 Bushwakker Blackberry Mead commemorative t-shirts left. Bushwakker Growler Gift Boxes include your choice of a glass or insulated black stainless steel Bushwakker Joe Fafard growler, two pint glasses and a gift certificate redeemable for a growler fill. Our Christmas Variety Six-Pack includes some of our seasonal and specialty offerings including bottles of Blackberry Mead and Missiletow Christmas Ale (available December 9th), our ornate fancy Hop Handle Growler Christmas Package with 2 Glasses and a Growler Fill is also back by popular demand…and you can’t go wrong with a Bushwakker gift card! Bushwakker Christmas Six-Packs. This popular gift item will return on Sunday, December 9th. Includes a bottle of our famous Blackberry Mead and Missiletow Christmas Ale as well as four other seasonal and popular brews! Limited quantities available.

The Bushwakker LOCAL ARTIST WALL for the month of December is another Bushwakker staff member father - daughter show. Bushwakker supervisor, Shauna Perfect, and her father John, will undoubtedly sell every piece adorning our wall in short order. John Perfect: I was born and raised in Regina. I studied art and attended university extension art classes during my high school years. I apprenticed with metal artist, Jabazzo, in my twenties learning about technique and design. I have worked in many mediums, however I prefer metal, turning found objects and scrap metal into art. I am retired from my day job and am now enjoying working together with my daughter, Shauna Perfect, creating metal art. Shauna Perfect: Born and raised in Regina. Art has always been a big part of my family in many different mediums. I grew up watching my dad make metal sculptures and decided many years ago that I wanted to give it a try. I went to school to learn the basics and am now an apprentice welder. I currently work here at the Bushwakker and am waiting to start my third year of school.  Most of the material I use is scrap metal I've gathered from various locations or from my dad's garage. Sometimes I'll have an idea of what I want to create but other times I just sort of lay the pieces out in front of me and let them decide.

Dec 7: FIRST FIRKIN FRIDAY: Enjoy the pomp and circumstance of this long-standing Bushwakker monthly tradition. A keg of special beer is paraded throughout the brewpub in a procession led by a piper from The Regina Police Service Pipes & Drums. A volunteer is selected to wield the handmade wooden maul affectionately called The Mighty Firkin Wakker and attempt to tap the firkin in one mighty blow. This month’s special holiday edition firkin will see the return of our very popular Kraken Spiced Black Rum-infused “Missile”tow Christmas Ale. The suds-soaking spectacle takes place at 5:30 PM. Dec. 8: “MISSILE”TOW CHRISTMAS ALE RELEASE. Avid fans of our “other” Christmas specialty brew look forward to this day every year. Rich malt flavours with plenty of depth and complexity abound. The perfect ale to sip on whilst curled up with a good book in front of a fireplace on a cold Saskatchewan winter night. A double batch was created this year in order to meet the growing demand of our “second most popular” holiday brew. See you at 11:00 AM sharp! Dec. 10: Monday Night jazz & Blues. A STORRY WITH HUGHES. Rockin’ acoustic blues duo featuring Jeff Storry and Billy Hughes. 8:00 PM. Dec. 12: Wednesday Night Folk - Special Christmas Edition. THE REGINA MALE VOICE CHOIR Christmas concert featuring The Boar’s Head Carol. Get into the holiday spirit with this one hour concert featuring Canada’s longest continuously performing male voice choir. The singing of the Boar’s Head Carol whilst a massive boar’s head is paraded throughout the pub is the highlight of the evening. 8:00 PM. 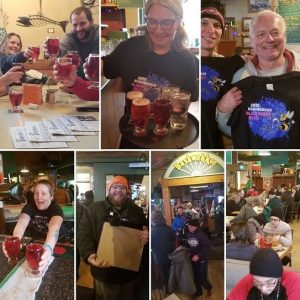 Another successful Mead Day took place on Saturday, December 1st. Another record was broken when the first folks to form the line-up arrived over 21 hours before it went on sale!