NEWS FROM THE BREWERY! Head brewer, Michael Gaetz, reports our seasonally available KAI’S MUNICH HELLES, and CHICO LIGHT SESSION IPA are now on tap. A batch of CHINOOK ESB, BLACKBERRY MEAD and a double batch of MISSILETOW ALE are also currently working their way through the brewery. Bushwakker Prime Rib Weekends Have Returned! Our melt-in-your-mouth, low-and-slow roasted prime rib dinners with jumbo Yorkshire pudding are back for the winter season! Available all day and night on Fridays and Saturdays and beginning at 5:00 PM on Sundays. Choose from either an 8 oz. or a 10 oz. cut. Prime rib is definitely one of Bushwakker executive chef Mike’s specialties. Our GUEST TAP is currently pouring Midge's Pecan Pie Red Ale from Regina’s Pile O’ Bones Brewing. Next up is the brand new Double Drops double IPA from Black Bridge Brewery. This will be followed by the Nokomis Craft Ales Winter Sour. Our November premium wine features are from Australia. The white is the MALLEE ROCK WINERY Pinot Grigio and the red is the BERTON METAL LABEL Black Shiraz. Both are $7.95 for a glass and $21.95 for a half litre. 650 ml glass bottles of our number one selling DUNGARVON IRISH RED ALE are currently available at ALL SIX SLGA stores including the Normanview, Quance Street, Broadway Avenue, North Albert Street, Dewdney & Lewvan and South Albert locations! 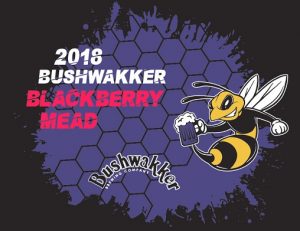 As a special reward for braving the Saskatchewan winter, the first 50 people waiting in line on December 1st will receive a FREE 2018 BUSHWAKKER BLACKBERRY MEAD T-SHIRT! Dec. 1: THE 2018 BUSHWAKKER BLACKBERRY MEAD RELEASE – 11:00 AM SHARP! A true Saskatchewan phenomenon and Tourism Regina and Tourism Saskatchewan will be with us this year in celebration! There is only one Bushwakker Blackberry Mead. Our offsale inventory of bottles sells out quick! A new record was set last year when the devoted mead enthusiasts braved a Saskatchewan winter night and began forming a line over 20 HOURS before it went on sale! The line-up stretched north past the building by 9:00 AM. Experienced mead lovers come prepared with ice fishing huts and propane heaters. We will be serving hot chocolate to keep the chilly mead lovers warm and have A SPECIAL TREAT FOR THE FIRST 50 PEOPLE WAITING IN LINE! We have been brewing our Blackberry Mead all year long preparing for our annual kick off to the holiday season. 400 pounds of specially selected Lumsden Valley honey and over 80 pounds of blackberries are in every batch. View the days remaining to Bushwakker Mead Day on our countdown clock over our brewhouse door. Catch the buzz! (#MEADDAY2018) Dec. 3: Monday Night jazz & Blues. ‘ROUND MIDNIGHT. Popular veteran Regina group plays popular jazz tunes. 8:00 PM. Dec. 5: Wednesday Night Folk. BRADFORD. Talented acoustic guitar folk duo featuring Brad Papp and Mark Radford. 8:00 PM. Dec. 5: MONTHLY ALES MEETING. New members are always welcome! Come down to the Bushwakker basement clubroom and sit in on a meeting with other homebrewers of all skill levels. Discover what the Ale & Lager Enthusiasts of Saskatchewan Homebrewing Club can offer you. This month’s topic: How to Brew a Mead. 8:00 PM. Dec 7: FIRST FIRKIN FRIDAY: Enjoy the pomp and circumstance of this long-standing Bushwakker monthly tradition. A keg of special beer is paraded throughout the brewpub in a procession led by a piper from The Regina Police Service Pipes & Drums. A volunteer is selected to wield the handmade wooden maul affectionately called The Mighty Firkin Wakker and attempt to tap the firkin in one mighty blow. This month’s special holiday edition firkin will see the return of our very popular Kraken Spiced Black Rum-infused “Missile”tow Christmas Ale. The suds-soaking spectacle takes place at 5:30 PM. Dec. 8: “MISSILE”TOW CHRISTMAS ALE RELEASE. Avid fans of our “other” Christmas specialty brew look forward to this day every year. Rich malt flavours with plenty of depth and complexity abound. The perfect ale to sip on whilst curled up with a good book in front of a fireplace on a cold Saskatchewan winter night. A double batch was created this year in order to meet the growing demand of our “second most popular” holiday brew. See you at 11:00 AM sharp! Dec. 10: Monday Night jazz & Blues. A STORRY WITH HUGHES. Rockin’ acoustic blues duo featuring Jeff Storry and Billy Hughes. 8:00 PM. Dec. 12: Wednesday Night Folk - Special Christmas Edition. THE REGINA MALE VOICE CHOIR Christmas concert featuring The Boar’s Head Carol. Get into the holiday spirit with this one hour concert featuring Canada’s longest continuously performing male voice choir. The singing of the Boar’s Head Carol whilst a massive boar’s head is paraded throughout the pub is the highlight of the evening. 8:00 PM. Dec. 17: Monday Night Jazz & Blues: THE MINISTRY OF GROOVE. Powerful 1970’s jazz funk and more including a performance their original tune, Blackberry Mead! 8:00 PM. Dec. 19: Wednesday Night Folk – special HOME FOR THE HOLIDAYS SASKATCHEWAN SONGWRITERS EDITION. SaskMusic and the Regina Songwriter’s Association present Glenn Sutter, Jaecy Bells and Wanda Gronhovd delivering holiday favourites and original compositions. 8:00 PM. Editor’s note: This edition marks the one year passing of Bushwakker co-founder and president, Dr. Beverly Robertson. This past year has seen much reflection amongst Bushwakker management where we found we were often asking ourselves, “What would Bev do?” when faced with a new situation. We have experienced validation time and again when adhering to the governing principals Bev had instilled in our company philosophy from day one. In 2018 we have continued to see much success and fulfilment both in business and in giving back to the community we serve. The following article is a few years old but is still a testament to the pioneering work Bev provided in creating our province’s vibrant craft brewing culture; a culture to be embraced and celebrated!

By Joe Wiebe Everyone knows beer is made from barley. Farmers grow a lot of barley on the Prairies. So beer must be a big deal in Saskatchewan, right? The problem is Canada’s beer bigwigs—Labatt and Molson—haven’t brewed beer in Saskatchewan since 1989, meaning there hasn’t been much local production in decades. Happily, that’s all changing. Renewed interest in local brewing over the last three years has given rise to seven new Saskatchewan microbreweries. These rookies join a pair of pioneers who paved the way long before anyone even used the term “craft beer.” The origins of Saskatchewan’s beer culture date to the mid-1970s when University of Regina physics professor Bev Robertson spent a sabbatical year in Stuttgart, Germany. There, he cultivated a taste for proper German bräu, but upon returning home was hard-pressed to find suds of similar quality. So, he tried his hand at home brewing. Before long, Robertson and a couple of pals found themselves prepping big batches on a weekly basis. As avid cross-country skiers who liked to “bushwhack” new trails, they dubbed themselves the Bushwhacker Brewers. The contemporary North American microbrewery movement began taking hold in the 1980s, but Saskatchewan’s liquor laws didn’t yet permit brewpubs. Robertson worked with the provincial government to modernize the outdated rules and, in 1991, he opened the doors to the Bushwakker Brewpub in the Strathdee Building, a heritage structure in Regina’s Warehouse District. No beer-soaked stay in Saskatchewan is complete without visiting Bushwakker. Try to catch a monthly First Firkin Friday, a bagpiper-led cask-tapping procession that gives a willing customer the honour of tapping the firkin (a.k.a. keg)—and getting soaked in beer as a result. Bushwakker’s annual Blackberry Mead release every December is another highlight: Patrons line up overnight for the coveted bottles. The Saskatoon side of the beer pioneer story is best described as an “accidental brewery.” Steve Cavan was an avid home brewer, but had trouble sourcing ingredients locally. In 1995, he began a home-based mail-order business to secure supplies for himself and other home brewers. This evolved into a storefront operation, where he found himself mashing and boiling grains and hops to save customers time. When tax officials required Cavan to register as a brewery in 2004, he made the leap and Paddock Wood Brewing was born. Over the next decade, Paddock was the province’s de facto craft brewery—its bottles were available in Saskatchewan and beyond; Bushwakker’s were only available at its brewpub. The local beer biz really picked up steam in 2013. First out of the gate was Prairie Sun Brewing in Saskatoon, which boasts an eclectic tasting room, kitchen and outdoor patio. Brewmaster Cameron Ewen, who previously worked at Paddock Wood, produces a variety of craft beer styles, including Crazy Farm, a spicy Belgian farmhouse ale with a citrus twist. You may not know Nokomis (pop. 436), about halfway between Regina and Saskatoon, but craft beer is quickly putting the small community on the map. Nokomis Craft Ales opened here in 2014, when founder Jeff Allport and his wife relocated from Vancouver. The brewery is a modest affair, open only on Thursday and Friday afternoons, but the beer is delicious, making it a perfect road-trip diversion. Swift Current also welcomed its own hometown beer in 2014: Black Bridge Brewery. Co-owners and long-time residents Clayton and Kari Stenson grew tired of the lack of good local beer options. With a relatively large capacity, Black Bridge packages and distributes its brews throughout the Prairies. Back in Regina, Rebellion Brewing grew out of that city’s original brewpub’s supportive community—founders Mark Heise and Jamie Singer became friends after competing against each other in a Bushwakker-sponsored home-brew contest. Among Rebellion’s offerings are lentil cream ale, sour and barrel-aged beers, gluten-free amber ale and seasonal Tripel brewed with Saskatchewan-grown Haskap berries. Saskatoon’s 9 Mile Legacy joined the fray in 2015. In true Prairie style, the name refers to the distance between the family farms of founders Shawn Moen and Garrett Pederson. Technically a “nanobrewery” due to its very small batch production, the brewery will soon expand into the artsy Riversdale neighbourhood. Rounding out the boom is Malty National Brewing, which opened in Regina’s Heritage ‘hood earlier this year and shares its building with a coffee roaster and a vintage vinyl shop. Malty National focuses on variety, releasing a new beer each week—mostly hop-forward styles with the occasional stout mixed in for good measure. With such diverse, thirst-quenching libations, now is the time to enjoy a pint of local, independently produced, made-in-Saskatchewan beer. 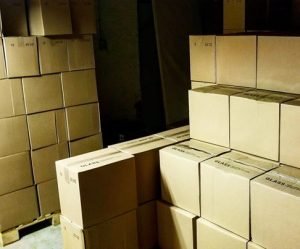 A year-long labour of love! The mountains of cases filled with 2018 Bushwakker Blackberry Mead continue to grow higher in our special mead aging cellar. 6000 hand-filled bottles will be released on Saturday, December 1st at 11:00 AM sharp!