NEWS FROM THE BREWERY! Head brewer, Michael Gaetz, reports our seasonally available KAI’S MUNICH HELLES, and CHICO LIGHT SESSION IPA are now on tap. A batch of CHINOOK ESB, BLACKBERRY MEAD and a double batch of MISSILETOW ALE are also currently working their way through the brewery. Bushwakker Prime Rib Weekends Have Returned! Our melt-in-your-mouth, low-and-slow roasted prime rib dinners with jumbo Yorkshire pudding are back for the winter season! Available all day and night on Fridays and Saturdays and beginning at 5:00 PM on Sundays. Choose from either an 8 oz. or a 10 oz. cut. Prime rib is definitely one of Bushwakker executive chef Mike’s specialties. Our GUEST TAP is currently pouring the Eclectic Mix Dry Hop offering from Swift Current’s Black Bridge Brewery. Next up is Midge's Pecan Pie Red Ale from Regina’s Pile O’ Bones Brewing. Our November premium wine features are from the MALLEE ROCK WINERY in Australia. The red is a SHIRAZ/CABERNET and the white is a PINOT GRIGIO. Both are $7.95 for a glass and $21.95 for a half litre. 650 ml glass bottles of our number one selling DUNGARVON IRISH RED ALE are currently available at ALL SIX SLGA stores including the Normanview, Quance Street, Broadway Avenue, North Albert Street, Dewdney & Lewvan and South Albert locations! You can also find our Palliser Porterat the Quance Street SLGA store Growler Filling Station. Our current Bushwakker Writers Corner featured author is Anne Campbell. Be sure to browse her latest book as well as the many local authors’ works displayed on our jam-packed shelf in the northwest corner of the brewpub! 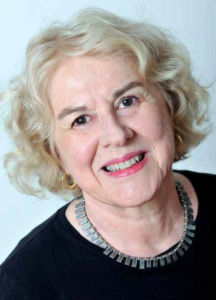 Anne Campbell is an award winning Canadian writer, editor and arts advocate. Her works include six collections of poetry, the most recent, The Fabric of Day, new and selected poems, from Thistledown Press, 2017, nominated in 2018 for Sask Book Awards: the Poetry and City of Regina awards; co-edited works, including Regina’s Secret Spaces: love and lore of local geography, and Biblio Files, a history of the Regina Public Library, from the U of R Press; the extensive Dunlop Art Gallery catalogue, Mind the Gap; magazine and journal anthologized stories, nonfiction and poetry , as well as musical compositions performed internationally. Anne has supported the arts, cultural heritage and multi-cultural relationships through conference presentations, service on public Boards, and through readings, residencies, workshops, and arts advocacy. Her many awards include the City of Regina Writing award, the Mayor’s Heritage Award, the Mayor’s Writing Award, as well as local and national writing and community awards. Her Archives are located at the University of Regina Library Archives. Biblio Files – Synopsis: From the effort of the first librarian who ensured immigrants could access books in their own languages, to the present day as an active community hub, the library has been responsible for many ground-breaking Canadian firsts. The Regina Public Library implemented the country’s first fully automated library system, established the first writer-in-residence program, pioneered English as a Second Language classes, hosted Indigenous storytelling circles, and was instrumental in developing a single on-card system for all of Saskatchewan. With contributions from community members, Biblio Files: A History of the Regina Public Library covers the library’s entire history and demonstrates why it is such a beloved and necessary institution. 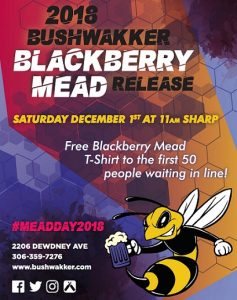 Dec. 1: THE 2018 BUSHWAKKER BLACKBERRY MEAD RELEASE – 11:00 AM SHARP! A true Saskatchewan phenomenon! There is only one Bushwakker Blackberry Mead. Our offsale inventory of bottles sells out quick! A new record was set last year when the devoted mead enthusiasts braved a Saskatchewan winter night and began forming a line over 20 HOURS before it went on sale! The line-up stretched north past the building by 9:00 AM. Experienced mead lovers come prepared with ice fishing huts and propane heaters. We will be serving hot chocolate to keep the chilly mead lovers warm and have A SPECIAL TREAT FOR THE FIRST 50 PEOPLE WAITING IN LINE! We have been brewing our Blackberry Mead all year long preparing for our annual kick off to the holiday season. 400 pounds of specially selected Lumsden Valley honey and over 80 pounds of blackberries are in every batch. View the days remaining to Bushwakker Mead Day on our countdown clock over our brewhouse door. Catch the buzz! (#MEADDAY2018) Dec. 8: “MISSILE”TOW CHRISTMAS ALE RELEASE. A double batch was brewed this year to meet the growing demand of our “other” seasonal specialty brew.

Armoury Brewing Striving for Positive, Homegrown Impact on the Battlefords

By Brady Lang A little taste of the Battlefords. That’s what Armoury Brewing is setting out to do, as they prepare to open up their new brewing company in the area. The company is working out of the Armoury building in the city, which was built in 1913 and to date they’ve been working on a lot getting ready to open up in the near future. A variety of questions have come up to the owners lately on when the doors will officially open at the Armoury. One of the owners, Brennan Lampitt, says that they have six individuals working around the clock; making sure the vision behind the brewery comes to full fruition. They were brewing all of last week, and have five half-batches on the go that will dictate their timeline for their much anticipated opening. “We’re trying not to rush it, we want to come out of the gate with a good product,” said Lampitt. “We definitely are extremely eager to open and share with the public just what we’ve been doing here. We’re as excited to show them, as they are to see it.” Lampitt says throughout the process, they’ve received nothing but positive feedback on the business from not only people around the Battlefords, but also other breweries around the province. Their five owners Brad Taylor, Gregg and Jackson Tady, Wade Voigt, and Lampitt himself, alongside brew master Logan Dommett, pride themselves on being yet another positive aspect of the Battlefords having been born and raised in the area. “I just hope that this is what we want it to be as a positive thing for the Battlefords,” said Lampitt. “(Personally) I can’t see a negative thing about it.” Ownerships ultimate vision behind the business was to create something that people of the Battlefords are proud to have, and also a place where people from the surrounding communities can come in and enjoy. During an interview, Lampitt mentioned that he was watching brew master Dommett cleaning kegs in front of him and how excited he was when it came to the project finally becoming a reality. One of the major parts of their end vision was incorporating the rich history of the Battlefords and the Armoury within their business and what they create in the craft brew. “We tried to do it justice,” Lampitt said. “When you come in, you get to see a little bit of our community’s history when you’re here. There was a lot of scare off the hop of a bar, or a tavern, and all night parties. That’s not what this place is.” Lampitt singled out the view of what they want to be known for within the community. With visitors being able to come into their tap room and sit down, enjoy the view and try something that visitors of the Armoury will enjoy in the form of what they’re creating. He hopes that other establishments within the city also take note of what they’re doing, and catch on to their craft beer. Being able to enjoy what they created around the city, or if people come in and fill up a growler to take home, it’s all about getting that taste of the Battlefords in the hands of the public. It hasn’t all been sunshine for the local owners, though. Lampitt admits that they have had some naysayers, but upon looking and checking out what they’re doing at the Armoury, people’s tones change quite quickly. “We had a few people in tears when they came in and saw what we were doing,” he said. “Guys that used to work here back in the day, when they were using this as a drill hall. They were blown away with the use of the space.” A huge impact on Armoury’s business is keeping everything local. Provincially, Saskatchewan has grown to be a big part of the craft beer industry. The thing that Lampitt didn’t expect was the way that the craft brewing community didn’t shun the new competitor; it was all positive and trying to help when it came to visits from established brewers in Saskatchewan. They’ve had visits from 9 Mile Legacy, Makers Malt and Rebellion, and Lampitt says it’s surreal. Having other “artists” come together continues to help the industry grow as a whole. Getting that positive feedback from the community keeps the wind in their sails in terms of pushing through until opening day. Saskatchewan continues to grow in the industry, as more people continue to utilize resources around the province to make the industry Saskatchewan’s own and Saskatchewan grown. Lampitt hopes the idea becomes something that grows itself, and people embrace it. “We’re in the neck of land for it,” he said. “If we can keep it as local as we can with the grains, and everything that goes into making the beers is in abundance here (in the province). Everything’s super local, for local people. It’s something we all can be proud of, but we also get to be the spokespersons for it.” Even though the doors haven’t opened up at the brewery yet, Lampitt hopes to put their own stamp on the industry as a whole and when asked where he sees the company in five years, he did struggle to find a specific goal that they can strive for. Instead, he had a more holistic approach to the Armoury. “We hope to continue to grow as a business as well as a craft,” he said. “Trying new things and hopefully down the road that allows us to bring more craft knowledge to the Battlefords. We just hope to grow that way so we continue to stay relevant, and stay new.”

Man: "What sign were you born under?" Woman: "No Parking." Man: "Hey, baby, what's your sign?" Woman: "Do not Enter" Man: "I know how to please a woman." Woman: "Then please leave me alone." Man: "Hey, come on, we're both here at this bar for the same reason" Woman: "Yeah! Let's pick up some chicks!" Man: "How do you like your eggs in the morning?" Woman: "Unfertilized"