NEWS FROM THE BREWERY! Head brewer, Michael Gaetz, reports our seasonally available KAI’S MUNICH HELLES, CHICO LIGHT SESSION IPA, and MAKER’S MALT PREMIUM BROWN ALE are now on tap. A batch of BLACKBERRY MEAD and a double batch of MISSILETOW ALE are also currently working their way through the brewery. Bushwakker Prime Rib Weekends Have Returned! Our melt-in-your-mouth, low-and-slow roasted prime rib dinners with jumbo Yorkshire pudding are back for the winter season! Available all day and night on Fridays and Saturdays and beginning at 5:00 PM on Sundays. Choose from either an 8 oz. or a 10 oz. cut. Prime rib is definitely one of Bushwakker executive chef Mike’s specialties. The first 120 tickets to our annual Single Malt Scotch Tasting Event  sold in just 23 minutes! All 150 are now gone. Much thanks for your continued enthusiasm and support fellow scotch lovers! Our GUEST TAP is currently pouring a Sour IPA from Nokomis Craft Ales. Next up is an Eclectic Mix Dry Hop offering from Swift Current’s Black Bridge Brewery. Our November premium wine features are from the MALLEE ROCK WINERY in Australia. The red is a SHIRAZ/CABERNET and the white is a PINOT GRIGIO. Both are $7.95 for a glass and $21.95 for a half litre. 650 ml glass bottles of our number one selling DUNGARVON IRISH RED ALE are currently available at the Quance Street, Broadway Avenue, North Albert Street, Dewdney & Lewvan and South Albert SLGA stores! You can also find our Palliser Porter at the Quance Street SLGA store Growler Filling Station. 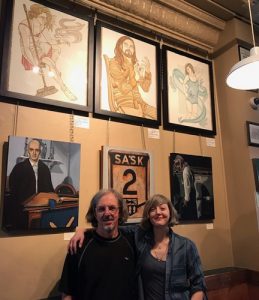 Our  LOCAL ARTIST WALL for the month of November features the works of father and daughter artists, Quin and Tim Greig. Their stories are as follows: Tim Greig obtained a Bachelor of Fine Arts and Certification in Education from the University of Manitoba in 1977/78 and went on to teach art in Saskatchewan middle schools during the late 1970’s and early 80’s. In 1988, he made a career change after completing a diploma in healthcare administration at the University of Saskatchewan. Tim and his family moved to the RM of Dauphin in 2002 and he became a member of the local art group, returning to painting and drawing again with passion. He has participated in several group shows in Manitoba and a few in Saskatchewan, with one solo exhibition to date. Although he currently resides in Manitoba, the majority of his colleagues, friends and patrons in the art world are from Saskatchewan. For this joint exhibition with his daughter Quin, Tim has created 3 acrylic paintings inspired by photographs he took while visiting a Saskatchewan museum this year.  The artist was intrigued by complicated shadow play in the environment and also the weathering present on old highway signage. Quin C. Greig was born in Swan River, Manitoba in 1988 and was raised on a remote acreage. Now a practicing interdisciplinary artist, Quin received her Bachelor of Fine Arts with distinction from the University of Regina in 2013. While experienced working in multiple artistic mediums, she specializes in watercolor drawings. Deeply interested myth and magic - She is simultaneously, and just as importantly, influenced by the people whom she encounters in her daily life. In previous works, she has cast her friends, family and co-workers into roles made traditional to others through fairy tales, fables and allegory. This is representative of the ways in which she feels she has encountered mystery, synchronicity, and archetypes from the Jungian “collective unconscious” in her own unfolding narrative. Keeping in close relationship to the broader themes of her prior work, in this series of drawings Quin explores the intersection of her personal life with idioms and turns of phrase. Quin has spent years refining her signature style of line work, and has been commissioned for myriad projects on behalf of private individuals. She has also participated in several group shows, with this exhibition being the second she has coordinated with her father Tim. Quin currently divides her time between her home studio and The Bushwakker Brewing Company where she has worked as a server since 2011.

Nov. 11: OPEN AT 11:30 on Remembrance Day Sunday. Enjoy our Winnipeg Burger & a Pint special for only $18.95 both Saturday and Sunday. Nov. 12: Monday Night Jazz & Blues. SUFFICIENT CONDITION. Regina blues rock band returns for an encore performance. 8:00 PM. Nov. 14: Wednesday Night Folk. THE STRANGE VALENTINES. An Australian and a Nova Scotian sing about the jerks in the world. 8:00 PM. Nov. 15: HEALTH SCIENCE PUB - Forgetting What we Know About Alzheimer's Disease. Our wildly popular Science Pub Series has returned for a seventh incredible season! Enjoy lectures on scientific topics of general interest in our Arizona Room (main floor banquet room) over beer and snacks. The room opens at 5:00 PM and quite often is full by 6:00 PM. Avoid disappointment and come down early for dinner and a pint before the presentation which begins at 7:00 PM. This month’s lecture will be presented by Maria Alejandra Castilla Bolanos from the Faculty of Science at the University of Regina. Memory is important not only for the setting of future actions, but also emotional connections to others. In diseases such as Alzheimer's disease (AD), and other related dementia diseases (e.g. Parkinson's), individuals are slowly robbed of this important aspect of our brain physiology. AD is the most common type of dementia, increasing by 10 individuals every 24 hours in Saskatchewan. AD results from progressive neuronal cell death which ultimately leads to memory loss in the individual due to destruction of memory centres in the brain. While disease development and symptoms are well known, the cause of AD remains elusive. Currently there is no cure for AD, and current therapies just slow down the disease progression. Our lab has developed several techniques to investigate how AD damages neurons. Some of our findings reverse what we know of AD disease and may help to develop pharmacological interventions in the future. 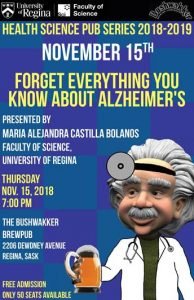 Original story from Indiana University  More and more breweries are investing in practices to save energy and reduce greenhouse gases. Will it pay off? A study by Indiana University researchers suggests it may. Drawing on survey research, they find that a majority of U.S. beer drinkers would be willing to pay more for beer produced with sustainable practices. On average, they would pay about $1.30 more per six-pack. "The takeaway for the brewing industry is that it is financially feasible to introduce energy-saving practices into the brewing process," said Sanya Carley, associate professor in the IU Bloomington School of Public and Environmental Affairs and the first author of the paper. "Even if it ends up adding costs, more than half of all beer consumers are willing to absorb those extra costs." The study, "Willingness-to-Pay for Sustainable Beer," was published by the journal PLOS ONE. Lilian Yahng, director of research and development for IU's Center for Survey Research, is a co-author. The research highlights potential for energy savings and sustainability in an energy-intensive industry that is growing rapidly, especially in the craft-beer segment. The number of craft breweries grew by over 200 percent between 2005 and 2015, and their production increased by over 12 percent each year. The industry has considerable potential for reducing energy use and mitigating its impact on climate change. Some breweries have already added solar panels, installed onsite wastewater treatment plants, insulated brewing vessels and recaptured steam from the brewing process. But those kinds of measures require upfront investments that are likely to increase prices. To determine whether consumers would be willing to pay more for sustainably brewed beer, the researchers drew on a survey of over 1,000 self-reported beer drinkers, all over age 21. They found that 59 percent said they would pay more. Consumers who already pay more for their beer were most likely to be willing to pay a premium for sustainability. Also, those who said they would pay more for sustainable beer were likely to report lifestyle activities associated with the common good. For example, they spent time in volunteer work or engaged in recycling, composting, and buying locally produced food and products. Surprisingly, however, there was no significant correlation between the type of beer that consumers preferred and their willingness to pay more for sustainability, after controlling for differences in price. Consumers of traditional American lagers -- think Budweiser and Coors -- were as likely to be willing to pay more as those who prefer craft beers, a category that includes such exotic brews as avocado honey ale and a wild ale brewed with yeast cultured from the brewmaster's beard hairs. That said, the proliferation of beer varieties suggests that brewers will have to find new ways to distinguish themselves in an increasingly crowded market. Carley said the research suggests that going green could be a way for beer companies to do just that.