NEWS FROM THE BREWERY! Head brewer, Michael Gaetz, reports our seasonally available CHICO LIGHT SESSION IPA, HARVEST OKTOBERFEST LAGER, MAKER’S MALT PREMIUM BROWN ALE, and GREAT PUMPKIN SPICED BROWN ALE are now on tap. A batch of KAI’S MUNICH HELLES, BLACKBERRY MEAD and MISSILETOW ALE are also currently working their way through the brewery. Bushwakker Prime Rib Weekends Have Returned! Our melt-in-your-mouth, low-and-slow roasted prime rib dinners with jumbo Yorkshire pudding are back for the winter season! Available all day and night on Fridays and Saturdays and beginning at 5:00 PM on Sundays. Choose from either an 8 oz. or a 10 oz. cut. Prime rib is definitely one of Bushwakker executive chef Mike’s specialties. Tickets to our November 24th Single Malt Scotch Tasting Event go on sale Sunday, October 28th at noon! Last year almost all of the 150 tickets were sold in just a few hours! This year’s six featured single malts include: Glenfarclas 30 Year, Caol Ila 18 Year, Glenrothes Peated Edition, Glenfiddich IPA Finish, Ardnamurchan 2017 AD and Auchentoshan Virgin Oak 2. Tickets $84.95 each. Our GUEST TAP is currently pouring Cookie Stout from Regina’s Malty National Brewery. Upcoming guest draughts include a Sour IPA from Nokomis Craft Ales and a Robust Porter from Black Bridge Brewery. Our October premium red wine feature is the WALKING DEAD BLOOD RED BLEND from California. The white is the C’EST LA VIE Chardonnay/Sauvignon Blanc from France. 650 ml glass bottles of our number one selling DUNGARVON IRISH RED ALE are currently available at the Quance Street, Broadway Avenue, North Albert Street, Dewdney & Lewvan and South Albert SLGA stores! You can also find our Palliser Porter at the Quance Street SLGA store Growler Filling Station. Bushwakker Brewpub’s Writers Corner Seeks Books! Our 3rd Edition Writers Corner Launch will take place on Saturday, November 3 at 3:00 PM. We are seeking donations of recent publications (2016-2018 publication dates) from Saskatchewan authors (all genres) to help expand our library within the Writers Corner. The goal is to gradually increase the size of the library each year. More book shelves will be installed as the number of books increases. The books in the corner library will be available for patrons interested in reading works by local authors and the books are to remain in the brewpub at all times. To be considered for the library, books must be a minimum of 40 pages and professionally bound. Please drop off a copy of your recently published book (along with purchasing information which can be shared with brewpub patrons) to Grant Frew at Bushwakker. You can email Grant at bar@bushwakker.com. Rotating individual author biographies and brief book synopsis are featured in the brewpub’s weekly newsletter and social media channels on a regular basis.

Oct. 27: SASK VS BC. Kickoff is at 5:00 PM. Be sure to stop by The Bushwakker before or after the game and enjoy our gourmet BC BURGER & A PINT game day special for only $18.95. Come “devour” the competition! Oct. 27: ANNUAL CELTIC HALLOWE’EN PARTY. Win a $100 Bushwakker gift card in our costume contest; enjoy a pint of GREAT PUMPKIN SPICED BROWN ALE, devilishly delicious food specials and great live Celtic music with one of Regina’s top Celtic bands, WEST OF MABOU. Band starts at 8:00 PM. Costume contest at 9:30 PM. $5 cover charge begins at 6:00 PM. To get a taste of West of Mabou’s talents visit this link:  https://www.youtube.com/watch?v=AyvO-KZVRk0 Oct. 28: TICKETS TO THE NOVEMBER 24TH BUSHWAKKER SINGLE MALT SCOTCH TASTING EVENT GO ON SALE AT NOON TODAY! Oct.: 29: Monday Night Jazz & Blues. TDC INC. Dueling vocalists fronting this 6 piece classic jazz/rock/blues group! 8:00 PM. Oct. 31: Wednesday Night Folk. THE HIGHLANDERS. Celtic music and more from this talented trio making their Bushwakker debut. 8:00 PM. Nov. 2: FIRST FIRKIN FRIDAY. Enjoy the pomp and circumstance of this longstanding Bushwakker monthly tradition! A piper from The Regina Police Services Pipes & Drums leads a small keg (the firkin) of special ale throughout the pub in a procession. A guest volunteer tapper is selected to wield the handmade wooden maul affectionately named, The Mighty Firkin Wakker, and attempt to tap the keg in one swift blow! This month’s special cool weather brew will be a THAI CHILI CHOCOLATE PORTER. The suds-soaking spectacular takes place at 5:30 PM. Nov. 3: BUSHWAKKER WRITERS CORNER 3ND EDITION READING. Presented by the Saskatchewan Writers’ Guild and The Bushwakker Brewpub.  Join us for this 3rd edition author’s reading in the Bushwakker  Writers Corner, a space dedicated to celebrating recent works of Saskatchewan published authors. Enjoy readings from five local authors including: Anne Campbell, Ven Begamudré, Gail Bowen, Counios & Gane and Gord Hunter. It has become very apparent that local authors love Bushwakker desserts so a special Chocolate Surprise Dessert will be available that afternoon. 3:00 PM. 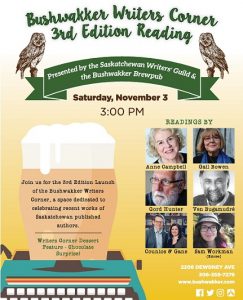 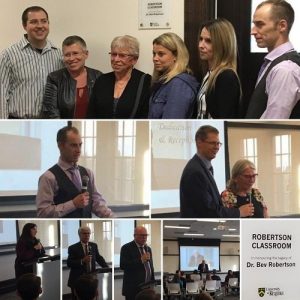 A very shy guy goes into a bar and sees a beautiful woman sitting at the bar. After an hour of gathering up his courage he finally goes over and asks, tentatively, "Um, would you mind if I chatted with you for a while?" She responds by yelling, at the top of her lungs, "No, I won't sleep with you tonight!" Everyone in the bar is now staring at them. Naturally, the guy is completely embarrassed and he slinks back to his table. After a few minutes, the woman walks over to him and apologizes. She smiles at him and says, "I'm sorry if I embarrassed you. You see, I'm a graduate student in psychology and I'm studying how people respond to embarrassing situations." To which he responds, at the top of his lungs, "What do you mean $200?"