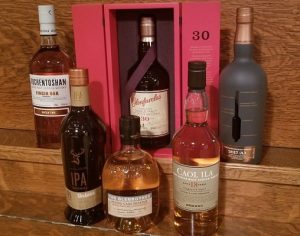 Our GUEST TAP is currently pouring 80 Shilling from the Black Bridge Brewery in Swift Current. Next up is the Toffee Five Chocolate Toffee Porter from Saskatoon’s Prairie Sun Brewery. This will be followed by the Cookie Stout from Regina’s Malty National Brewing. Our October premium red wine feature is the WALKING DEAD BLOOD RED BLEND from California. The white is the C’EST LA VIE Chardonnay/Sauvignon Blanc from France. 650 ml glass bottles of our number one selling DUNGARVON IRISH RED ALE are currently available at the Quance Street, Broadway Avenue, North Albert Street, Dewdney & Lewvan and South Albert SLGA stores! Bushwakker Brewpub’s Writers Corner Seeks Books! Our 3rd Edition Writers Corner Launch will take place on Saturday, November 3 at 3:00 PM. We are seeking donations of recent publications (2016-2018 publication dates) from Saskatchewan authors (all genres) to help expand our library within the Writers Corner. The goal is to gradually increase the size of the library each year. More book shelves will be installed as the number of books increases. The books in the corner library will be available for patrons interested in reading works by local authors and the books are to remain in the brewpub at all times. To be considered for the library, books must be a minimum of 40 pages and professionally bound. Please drop off a copy of your recently published book (along with purchasing information which can be shared with brewpub patrons) to Grant Frew at Bushwakker. You can email Grant at bar@bushwakker.com. Rotating individual author biographies and brief book synopsis are featured in the brewpub’s weekly newsletter and social media channels on a regular basis.

Oct. 22: Monday Night Jazz & Blues. ‘ROUND MIDNIGHT. Popular veteran act plays popular jazz and adult contemporary tunes. 8:00 PM. Oct. 24: Wednesday Night Folk. SEAN PINCHIN. Ontario folk and bluesman returns for an encore performance. 8:00 PM. Oct. 27: SASK VS BC. Kickoff is at 5:00 PM. Be sure to stop by The Bushwakker before or after the game and enjoy our gourmet BC BURGER & A PINT game day special for only $18.95. Come “devour” the competition! Oct. 27: ANNUAL CELTIC HALLOWE’EN PARTY. Win a $100 Bushwakker gift card in our costume contest; enjoy a pint of GREAT PUMPKIN SPICED BROWN ALE, devilishly delicious food specials and great live Celtic music with one of Regina’s top Celtic bands, WEST OF MABOU. One of CBC Saskatchewan's 2017 Artists to Watch, West of Mabou performs lively dance music steeped in the rich traditions of Scottish and Cape Breton fiddle and pipe tunes. Each of the members is an experienced performer in their own right, having performed at festivals, competitions, pubs, and ceilidhs around the world, including the World Pipe Band Championships, Canmore Highland Games, Western Canadian Music Awards, Canada Cup of Curling, and Ford World Men's Curling Championships. Band starts at 8:00 PM. Costume contest at 9:30 PM. $5 cover charge begins at 6:00 PM. To get a taste of West of Mabou’s talents visit this link:  https://www.youtube.com/watch?v=AyvO-KZVRk0 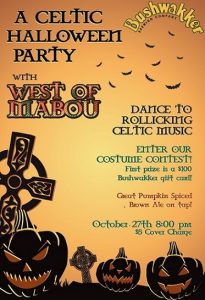 Texas bar owners launch a line of beer for dogs

By Maggie Gordon   Houston Chronicle  When Megan and Steve Long tell friends and customers about their newest venture, Good Boy Dog Beer, more often than not, they're met with the same three questions. One: Is it really for dogs? (Yes.) Two: Is it alcoholic? (No.) Three: Can I drink it? (Um, sure?) The beer doesn't exactly dance on a human palate, thanks to a complete lack of sodium. But that was never the intention. The Longs, who own Henderson Heights bar in the Sixth Ward and Reserve 101 downtown, wanted to create a new product that mixed two of their favorite things on the planet — beer and dogs, the Houston Chronicle reported . They're not pretending to be the first people with the idea. There's been a scatterplot of breweries offering pints for pups for more than a decade now. But they do seem to be the first in Houston, a city that has become increasingly dog-friendly in recent years, thanks to a growing number of patio bars willing to let four-legged friends tag along for Sunday funday. And that Fido-forward culture has helped the Longs find immediate success. Within weeks of their launch, all three flavors of their beer — IPA Lot in the Yard, Mailman Malt Licker and Session.squirrel! — are available in 15 bars throughout the city, including Front Porch Pub and FM Kitchen and Bar, for a recommended price of about $5 a can. And they're getting requests to ship cans across the country. "Everyone likes the idea of having a beer with their dog, you know?" says Steve, who is 41. Still, while the Longs saw the potential in their brew from the very beginning, they had no idea it would take off so quickly. The entire idea began as a way to fix a problem in their own home. "It all started with our oldest dog, our Rottweiler, Rocky," says Megan, who is 30. Rocky, who is 9, started having digestive issues as he progressed from middle age to his current status as a senior dog. "We had to change up his food. He was having allergic reactions, and his body was just kind of changing into an old man's, so we had to adjust to it," she says. "We talked to our vet, and our vet said the best, easiest thing to do was to just start making his own food and treats." It was a time-consuming process, but the Longs began cooking food at home for Rocky, and their 5-year-old German Shepherd mix, Chloe. They'd start with a bone-in chicken, so they'd get all the good stuff from the bone marrow, then add vegetables and other natural ingredients. "We were just shocked at how many things dogs can eat, and the good side effects of it, like what enhances their metabolism or their fur," says Megan. "So for the last few years, while we've been making this for him, filled notebooks with good and bad things for dogs, and the purposes. Like, turmeric helps their digestion. Ginger is good for their fur, and coat shininess." It didn't take long for them to start joking that they should brew the broth into a beer. But it was a couple years before those jokes turned serious. In January, the Longs began setting up a brewery in a friend's warehouse. They created recipes, found a canning company in Austin, and by this August, they were ready to brew three recipes, including an adaption of that original concoction for Rocky, which became the Mailman Malt Licker, and includes chicken, turmeric, ginger, oranges, carrots, basil, cilantro and fennel. "We brewed one night, and we brewed, I don't know, 500 cans or so. And we went out to sell it, and we were like 'Let's see if bars like it!' And we sold to like five bars, in the next day. So we were like, 'Let's not sell any more. Let's go home and brew,'" Megan says, laughing. "We thought people were going to be like 'Yeah, sure, maybe. Let me think about it.' Because when reps come and talk to us, sometimes we don't always have a space." But the bars made space. And that makes sense. The American Pet Products Association estimates that pets in the U.S. are a $72 billion business in 2018, up 29 percent, from $56 billion five years ago. Millennials — like Megan — are a huge part of this increase. Leslie May, founder of Pawsible Marketing, and expert on the pet market says pet products are a no-brainer as the industry continues expanding without a ceiling in sight. "Millennials don't really know of pets any different than as part of their family. They grew up that way, and that's the way the pet industry is going to go," May said.

During training exercises, the lieutenant driving down a muddy back road encountered another car stuck in the mud with a red faced colonel at the wheel. "Your jeep stuck, sir?" asked the lieutenant as he pulled alongside. "Nope," replied the colonel, coming over and handing him the keys, "*Yours* is."