NEWS FROM THE BREWERY! Head brewer, Michael Gaetz, reports our seasonally available CHICO LIGHT SESSION IPA, HARVEST OKTOBERFEST LAGER, MAKER’S MALT PREMIUM BROWN ALE, and GREAT PUMPKIN SPICED BROWN ALE are now on tap. A batch of KAI’S MUNICH HELLES, BLACKBERRY MEAD and MISSILETOW ALE are also currently working their way through the brewery. Bushwakker Prime Rib Weekends Return. Our melt-in-your-mouth, low-and-slow roasted prime rib dinners with jumbo Yorkshire pudding will return on Friday, October 19th. And Sunday suppers just got a whole lot better at the Bushwakker! Choose from either an 8 oz. or a 10 oz. cut. Prime rib is definitely one of Bushwakker executive chef Mike’s specialties. Tickets to our November 24th Single Malt Scotch Tasting Event go on sale Sunday, October 28th at noon! Last year almost all of the 150 tickets were sold in just a few hours! This year’s featured single malts include: Glenfarclas 30 Year, Caol Ila 18 Year, Glenrothes Peated Edition, Glenfiddich IPA Finish, Ardnamurchan 2017 AD and Auchentoshan Virgin Oak 2. $84.95 Our GUEST TAP is currently pouring 80 Shilling from the Black Bridge Brewery in Swift Current. Next up is the Toffee Five Chocolate Toffee Porter from Saskatoon’s Prairie Sun Brewery. Our October premium red wine feature is the WALKING DEAD BLOOD RED BLEND from California. The white is the C’EST LA VIE Chardonnay/Sauvignon Blanc from France. 650 ml glass bottles of our number one selling DUNGARVON IRISH RED ALE are currently available at the Quance Street, Broadway Avenue, North Albert Street, Dewdney & Lewvan and South Albert SLGA stores! You can also find our Irish Red Ale at the Quance Street SLGA store Growler Filling Station. Bushwakker Brewpub’s Writers Corner Seeks Books! Our 3rd Edition Writers Corner Launch will take place on Saturday, November 3 at 3:00 PM. We are seeking donations of recent publications (2016-2018 publication dates) from Saskatchewan authors (all genres) to help expand our library within the Writers Corner. The goal is to gradually increase the size of the library each year. More book shelves will be installed as the number of books increases. The books in the corner library will be available for patrons interested in reading works by local authors and the books are to remain in the brewpub at all times. To be considered for the library, books must be a minimum of 40 pages and professionally bound. Please drop off a copy of your recently published book (along with purchasing information which can be shared with brewpub patrons) to Grant Frew at Bushwakker. You can email Grant at bar@bushwakker.com. Rotating individual author biographies and brief book synopsis are featured in the brewpub’s weekly newsletter and social media channels on a regular basis. Our Bushwakker Local Artist Wall for the month of October features the works of BROOKLYNE LYON. Brooklyne has been creating art since she has been able to hold a pencil. She soon developed a creative-driven mind which inspired her to pursue her career in the field by working towards a degree in visual arts at the University of Regina. Her art is influenced by her love for spirituality and nature. She utilizes acrylic paint, India ink and pen for her mediums. From simple to intricate line work, Brooklyne’s art style screams her personality. She hopes you feel peaceful vibrations from her pieces. She was Ness Creeks’ 2018 visual artist and attends the festival as a vendor and is also a vendor at the Cathedral Street Fair. You can find her art on Facebook @brooklyneartworks and on Instagram @brooklynelyonartworks. Enjoy her talents all this month! 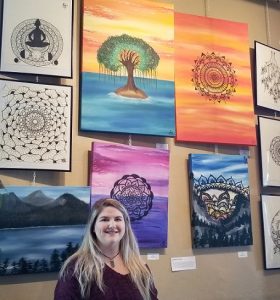 Oct. 13: SASKATCHEWAN CRAFT BREWERS FESTIVAL. Our provinces newest beer festival is all about celebrating the delicious and creative brews being produced by small independent breweries right here at home. Fifteen of our province's craft breweries all under one roof! Exclusive cask offerings, locally sourced cuisine, all Saskatchewan music, meet the brewery owners and brewers! Takes place at Winston's Pub in the Hotel Senator in Saskatoon! Don't delay and visit Eventbrite.ca to get your regular or VIP tickets! Only 300 tickets will be made available to this premier Saskatchewan craft brewing showcase! Oct. 15: Monday Night Jazz & Blues. THE MINISTRY OF GROOVE. Great 1970’s jazz funk and beyond. Love those horns! 8:00 PM. Oct. 17: Wednesday Night Folk. AUTUMN SINGER/SONGWRITER SHOWCASE.  This edition features the talents of; Devon Floyd, David Molloy, Trent Leggott, Regan Hinchcliffe, Neil Child, and Marissa Burwell. 8:00 PM. Oct. 18: SCIENCE PUB – I ❤ Carbon Taxes! How making you pay more to fill up your tank can help save civilization. Our wildly popular Science Pub Series has returned for a seventh incredible season! Enjoy lectures on scientific topics of general interest in our Arizona Room (main floor banquet room) over beer and snacks. The room opens at 5:00 PM and quite often is full by 6:00 PM. Avoid disappointment and come down early for dinner and a pint before the presentation which begins at 7:00 PM. This month's lecture will be presented by Brett Dolter, PhD, Assistant Professor, Department of Economics at the University of Regina.  A carbon tax will increase the cost of gasoline, diesel, natural gas, and electricity. Many economists believe this policy is the best way to move society away from fossil fuels and put a stop to increasing global temperatures and climate change. Meanwhile, the Saskatchewan government is staunchly opposed to carbon pricing, and has launched a court challenge to stop the federal government from imposing a carbon price on the province. Professor Brett Dolter will explain why economists like carbon pricing, and in the process hopes to help Rider Nation learn to stop worrying and love carbon taxes. 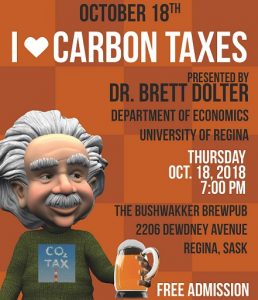 One of the airlines recently introduced a special half-fare rate for wives accompanying their husbands on business trips. Anticipating some valuable testimonials, the publicity department sent out letters to all the wives of businessmen who used the special rates, asking how they enjoyed their trip. Responses are still pouring in asking, "What trip?"