NEWS FROM THE BREWERY! Head brewer, Michael Gaetz, reports our seasonally available MOTHERWELL RHUBARB RED FIFE WITBIER, SUMMER WHEAT, LAST CHANCE CHERRY WHEAT, and HARBINGER MAIBOCK are now on tap. A batch of KAI’S MUNICH HELLES, HARVEST OKTOBERFEST LAGER, MAKER’S MALT BROWN ALE and CHICO LIGHT SESSION IPA are also currently working their way through the brewery. Our GUEST TAP is currently pouring a Raspberry Sour from Nokomis Craft Ales. Next up is the El Dorado Single Hop Pale Ale from Swift Current’s Black Bridge Brewery. Our September premium red wine features are from the SHY PIG WINERY in Australia. The white is a Sauvignon Blanc and the red is a Shiraz. Both are $6.95 for a glass and $17.95 for a half litre. 650ml glass bottles of our number one selling DUNGARVON IRISH RED ALE are currently available at the Quance Street, Broadway Avenue, North Albert Street and South Albert SLGA stores! You can also find our Irish Red Ale at the Quance Street SLGA store Growler Filling Station. 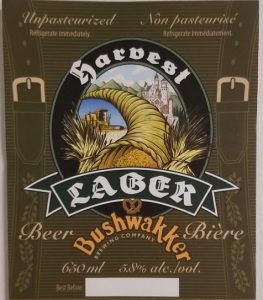 Our Bushwakker Oktoberfest brew, Harvest Lager, returns to kick off a weeklong celebration of fine German-style cuisine   Oct. 3: Wednesday Night Folk. TONGUE JUNGLE. Great harmonies from this talented duo making their Bushwakker debut. 8:00 PM. Oct. 3: MONTHLY ALES MEETING. Looking to enhance your homebrewing skills? Why not sit in on a meeting with some of Regina’s most passionate and enthusiastic homebrewers? All levels of brewing experience are welcome. Meetings are held in the Bushwakker basement clubroom on the first Wednesday of the month at 8:00 PM. This month’s presentation topics will be Belgian Strong/American Strong Ale and Fermentation Control. Oct. 5: FIRST FIRKIN FRIDAY. Enjoy the pomp and circumstance of this longstanding Bushwakker monthly tradition! A piper from The Regina Police Services Pipes & Drums leads a small keg (the firkin) of special ale throughout the pub in a procession. A guest volunteer tapper is selected to wield the handmade wooden maul affectionately named, The Mighty Firkin Wakker, and attempt to tap the keg in one swift blow! The suds-soaking spectacular takes place at 5:30 PM. Oct. 6: ANNUAL GREAT PUMPKIN SPICED BROWN ALE RELEASE. This will be Bushwakker head brewer, Michael Gaetz's latest version of this autumn specialty brew. Made with ginger, vanilla, nutmeg, cinnamon, cloves and more. Be sure to pick up some bottles or a growler fill for the Thanksgiving weekend! Oct. 8: SASK VS EDMONTON. We will open this Thanksgiving Day Monday at 11:00 AM. You will have plenty of time to enjoy our gourmet EDMONTON BURGER & A PINT game day special for only $18.95 before the 2:00 PM kickoff. Oct. 10: Wednesday Night Folk. AMAYA LUCYK. Regina born and raised singer/songwriter with a new EP. 8:00 PM. Oct. 13: SASKATCHEWAN CRAFT BREWERS FESTIVAL. Our provinces newest beer festival is all about celebrating the delicious and creative brews being produced by small independent breweries right here at home. Fifteen of our province's craft breweries all under one roof! Exclusive cask offerings, locally sourced cuisine, all Saskatchewan music, meet the brewery owners and brewers! Takes place at Winston's Pub in the Hotel Senator in Saskatoon! Don't delay and visit Eventbrite.ca to get your regular or VIP tickets! Only 300 tickets will be made available to this premier Saskatchewan craft brewing showcase! 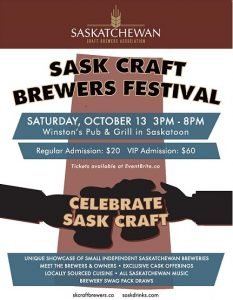 What the Heck Is an Oktoberfest Beer?

By Mike Pomranz In the flock of beer styles, Oktoberfest is a bit of an odd duck—they can be extremely tricky to classify. "But aren't Oktoberfest beers just the beers served during Oktoberfest?" you might logically ask—and you would be right. But therein lies the problem. Unlike most styles, Oktoberfest brews aren't particularly beholden to any one characteristic; instead, they are tied to a specific time. First, let's go through what we know for sure. The style of Oktoberfest includes both the beers specifically brewed for serving, or in the style of those served, at the world's largest beer festival, Oktoberfest in Munich, which takes place each year in mid-September (September 16 this year). That means these beers are typically consumed in September, not October as the name suggests. Also Oktoberfest beers are almost invariably lagers. (If you wanted to brew an ale for your Oktoberfest party, no one can stop you, but you'd definitely be bucking tradition.) However, surprisingly, the type of lager varies significantly, causing our biggest source of confusion. "When talking about Oktoberfest, it's important to understand that the beer has changed since the first festival in 1810," says Goose Island R&D Manager Mike Siegel, explaining what he believes to be the biggest misconception about the style. Siegel recently worked with Munich's Spaten Brauerei, one of the festival's official breweries, to create a new Oktoberfest beer for Goose Island. In America, our Oktoberfests tend to be red hued, slightly sweet beers known as a Marzen. But at the actual festival, the beers are closer to what most of us think of when we think of a German lager: paler beers, similar to another German style known as a Dortmunder. "[Back in 1810], the beer of Munich was Dunkel, a dark lager, and by 1872, the amber beer [aka Marzen] we are more accustomed to was introduced," Siegel elaborates. "As a result of using paler malts, it continued to get lighter in color throughout the 20th century. These days, the beer served at the Munich festival is golden, slightly more so than Helles (another pale, German lager style), but brewed to a higher gravity, resulting in a beer with a higher alcohol content. They are no longer the amber brews that American brewers make today which use lots of Munich and Caramel malts for color and a sweet, full flavor." So to summarize the Oktoberfest questions once and for all: The Oktoberfest beers made in America intended to mimic the style served at Oktoberfest in Munich are often nothing like the actual Oktoberfest beers served at the actual German Oktoberfest. They are often based on an older style. But that's not to say they have to be. Conscious of this discrepancy, some American brewers actually do make Oktoberfest beers that are more in line with the modern German style. And conversely, aware of American perceptions, some German breweries, export American-style Oktoberfest beers to the U.S. To help clarify things, the Brewers Association actually breaks down Oktoberfest into two distinct styles: German-Style Oktoberfest/Wiesn and American-Style Marzen/Oktoberfest. Though you can make an assumption about which type of Oktoberfest you're ordering, if you want to make sure, it always behooves you to ask. But here's a helpful tidbit: At the real Oktoberfest in Munich, only six local breweries serve on the premises: Paulaner, Spaten, Hacker-Pschorr, Augustiner, Hofbrau and Lowenbrau. Those are your true Oktoberfest beers in their purest form. By now, hopefully your understanding of Oktoberfest beers is as clear as a Dunkel—but we have one last question to clear up: If these are supposed to be Oktoberfest beers, why are the American versions based on a Marzen, German for March? Well, turns out that even though, like Oktoberfest, the style of Marzen is also named after a month, Marzen is now brewed year-round and, unlike the style of Oktoberfest, is no longer tied to a specific time period. Therefore, though the October style is still tied to, uh, September, the Marz style is no longer tied to March. And with that, let's simply say, "Prost!" Whether you're drinking a German Dortmunder-style Oktoberfest or an American Marzen-style Oktoberfest, you've earned this beer. 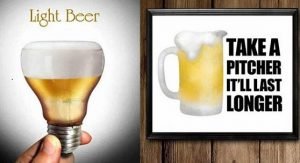 TIME OUT– Garden of Eden

Adam was hanging around the Garden of Eden feeling very lonely. So, God asked him, "What's wrong with you?" Adam said he didn't have anyone to talk to. God said that He was going to make Adam a companion and that it would be a woman. He said, "This pretty lady will gather food for you, she will cook for you, and when you discover clothing, she will wash it for you. She will always agree with every decision you make and she will not nag you. And will always be the first to admit she was wrong when you've had a disagreement. She will praise you! She will bear your children. And never ask you to get up in the middle of the night to take care of them. "She will NEVER have a headache and will freely give you love and passion whenever you need it." Adam asked God, "What will a woman like this cost?" God replied, "An arm and a leg." Then Adam asked, "What can I get for a rib?"