NEWS FROM THE BREWERY! Head brewer, Michael Gaetz, reports our seasonally available MOTHERWELL RHUBARB RED FIFE WITBIER, SUMMER WHEAT, LAST CHANCE CHERRY WHEAT, and HARBINGER MAIBOCK are now on tap. A batch of KAI’S MUNICH HELLES, HARVEST OKTOBERFEST LAGER, MAKER’S MALT BROWN ALE and CHICO LIGHT SESSION IPA are also currently working their way through the brewery. Our GUEST TAP is currently pouring the Cold Pressed Coffee Cream Ale from the Black Bridge Brewery in Swift Current. Next up is a Raspberry Sour from Nokomis Craft Ales. Our September premium red wine features are from the SHY PIG WINERY in Australia. The white is a Sauvignon Blanc and the red is a Shiraz. Both are $6.95 for a glass and $17.95 for a half litre. 650ml glass bottles of our number one selling DUNGARVON IRISH RED ALE are currently available at the Quance Street, Broadway Avenue and North Albert Street SLGA stores!!! 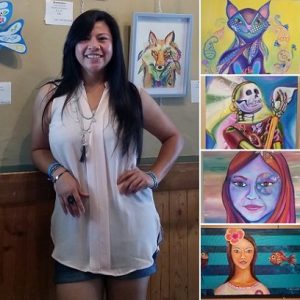 The Bushwakker LOCAL ARTIST WALL for the month of September features the talents of ADDY MALDONADO. Her artist biography is as follows: I grew up in Veracruz México and now I reside in Regina Sk. I'm a self-taught artist who has always had a passion for the visual arts and painting. It wasn't until early 2012 that I created my first paintings. I spent most of my childhood living with my grandparents in a small town in Veracruz. During this time, and thanks to the values I learned from my grandpas, I developed a deep love for nature and animals in general. Now as a painter, pets and nature influence most of my work. In my paintings I express my feelings for all that I love, my dreams and my most beloved memories.  My Mexican roots also influence the vibrant colours I use in my paintings. Enjoy Addy’s vibrant colourful works all this month! 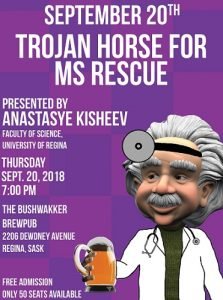 Sept. 20: HEALTH SCIENCE PUB – Trojan Horse For MS Rescue! Presented by the Integrated Health Research Cluster. Our wildly popular Science Pub Series has returned for a seventh incredible season! Enjoy lectures on scientific topics of general interest in our Arizona Room (main floor banquet room) over beer and snacks. The room opens at 5:00 PM and quite often is full by 6:00 PM. Avoid disappointment and come down early for dinner and a pint before the presentation which begins at 7:00 PM. This month's lecture will be presented by Anastasye Kisheev, Faculty of Science, University of Regina. Many people are likely familiar with Greek mythology, with one of the more famous stories being that of Troy. Using principles in this legend, we are developing ways to treat Multiple Sclerosis (MS). MS is a devastating disease where the protective insulation around the nerve is destroyed. This leads to impairment of movement and unfortunately eventually death. Saskatchewan has the highest incidence of this disease in the world, but the cause remains very elusive. Unfortunately current treatments are lacking. We are currently developing a therapy to treat MS using the story of the Trojan horse as a guideline, demonstrating that myth and science very much go hand in hand. Sept. 24: Monday Night Jazz & Blues. ‘ROUND MIDNIGHT. Popular veteran act plays popular jazz. 8:00 PM. Sept. 26: Wednesday Night Folk. BILLARNEY. Traditional reels from this very large Celtic act. 8:00 PM.

By David Baxter   Global News Regina Craft beer is usually associated with the west coast, but Regina’s brewing scene continues to hop into the national spotlight. Now, Expedia has ranked the Queen City the 4th best beer town in Canada. For members of the local brewer community, like District Brewing Company’s assistant brewer Walter Martin, it’s a major feather in the cap. “Regina’s beer scene is very vibrant. We have a lot of really great brewers here at District, but also Bushwakker, Malty National, Rebellion, Pile O’Bones. There are lots of great venues in Regina that carry great beers,” Martin said. Martin believes that the growth of the craft beer in Regina and in general can be attributed to changing tastes. “I think people are really looking for alternatives to the mass market sort of almost bland type of beers that have been the staple for going on 30, 40, 50 years,” he said. “Now beers are becoming available that have real quality ingredients and real flavor, and a lot of people are looking for that.” That’s not just Martin talking either. District brews one to two 10,000 litre batches each week. Martin estimates that equals about 24,000 cans a week. Economist Jason Childs has taught a class on the economics of beer at the University of Regina for the past six years. He says some of this growth can be attributed to the Saskatchewan Liquor and Gaming Authority (SLGA) changing laws that previously got in the way establishing a craft size brewery in the province. Now, Childs says the Saskatchewan industry has caught up. He’s not surprised at all by the Expedia ranking. “We’re getting recognized internationally now. We’re making some of the international lists as places to go and have really good locally brewed beer,” Childs said. Much of Regina’s brewing scene flows from a Dewdney Avenue staple, Bushwakker Brew Pub. Opening its doors over 27 years ago, Bushwakker is still going srong and creating new brews. “I think the late Bushwakker co-founder Bev Robertson would be very pleased to see the Queen City faired so well,” Bushwakker bar manager Grant Frew said. In addition to helping popularize craft beer in Regina, Bushwakker and Robertson helped get many brewers started through the Ale & Lager Enthusiast of Saskatchewan (ALES) club. “They got a leg up on everybody else. They were introduced to really high quality craft brewing techniques and they were brewing at home for many, many years before they decided to make that jump to the commercial level,” Frew said. The ALES Club hosts the annual ALES Open homebrewer competition. This sees thousands of bottles of beers submitted from across Canada, and judged by a team of club members in Regina.

Carolyn Albee – Expedia.ca     September, 2018 Ask any hophead from Nova Scotia to British Columbia, and you’ll hear the same refrain: craft beer in Canada just keeps getting better. Hoppier IPAs! Lighter lagers! Even more sour sours! There’s so much going on, it can be hard to keep up—but our annual report of the best beer towns in Canada is here to help. The 2018 edition covers even more hoppy happenings, the latest ester experiments, and the most up-and-coming sudsy cities. Whether you need IBU inspiration or are looking for a malty getaway, we’ve got your must-sip cities right here. These towns are home to some of the best breweries in Canada and should be on any beer lover’s bucket list. Let’s get hopping. #4. Regina, SK Regina is home to some top Canadian breweries, and continues to slay the prairies’ beer scene. District Brewing Co. took home a new medal in 2018 for the Lemon Ginger Radler, Bushwakker’s Wee Heavy keeps racking up awards, and Rebellion Brewing won recognition for its Flanders Sour Ale. The new kids on the block are doing big things, too. Pile O’ Bones Brewing shows off the enterprising Sask mindset, brewing out of the basement of O’Hanlon’s Pub with delicious results. At Malty National Brewing Corp., the beer lineup changes so quick it’ll make your head spin—or maybe that’s all the Septembeer Pale Ale you just drank. Too see the complete list of top Canadian Beer Towns visit: https://www.expedia.ca/travelblog/best-beer-towns-in-canada-2018/ 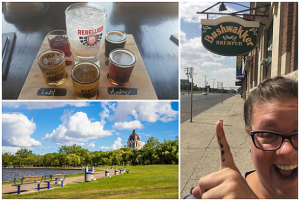 A linguistics professor was lecturing to his class one day. "In English," he said, "a double negative forms a positive. In some languages though, such as Russian, a double negative is still a negative. "However," he pointed out, "there is no language wherein a double positive can form a negative." A voice from the back of the room piped up, "Yeah, right!"