NEWS FROM THE BREWERY! Head brewer, Michael Gaetz, reports our seasonally available MOTHERWELL RHUBARB RED FIFE WITBIER, SUMMER WHEAT, LAST CHANCE CHERRY WHEAT, HARBINGER MAIBOCK and TWO SON’S MILK STOUT are now on tap. A batch of KAI’S MUNICH HELLES, HARVEST OKTOBERFEST LAGER, MAKER’S MALT BROWN ALE and CHICO LIGHT SESSION IPA are also currently working their way through the brewery. Our GUEST TAP is currently pouring the Oat Session Ale from Black Bridge Brewing in Swift Current. Up next is the Pile O’ Bones Brewery Cranberry Sour! Following that will be a Cold Pressed Coffee Cream Ale! Our September premium red wine features are from the SHY PIG WINERY in Australia. The white is a Sauvignon Blanc and the red is a Shiraz. Both are $6.95 for a glass and $17.95 for a half litre. 650ml glass bottles of our number one selling DUNGARVON IRISH RED ALE are currently available at the Quance Street, Broadway Avenue and North Albert Street SLGA stores!!! We were asked by the Regina Public Library to give an Introduction to Craft Brewing in Saskatchewan presentation. The event took place at the end of August and was sold out with a waiting list. We were very pleased to have the opportunity to tout the accomplishments of some of our fellow Saskatchewan craft brewers. Those in attendance heard a 75 minute presentation from Bushwakker bar manager, Grant Frew, and sampled six unique local craft beers. The participants were asked to evaluate each beer according to how closely it came to an ideal example of the style. All sampled products were excellent and quite varied in flavour profile. The tabulated scores out of 50 possible points are as follows: 1. District Brewing Lemon Ginger Radler   41.10 2. Bushwakker Brewpub Palliser Porter   40.92 3. Rebellion Brewing Lentil                         40.25 4. Nokomis Craft Ales Brown Ale  39.67 5. Black Bridge IPA!                  37.44 6. Pile O’ Bones Brewing Cranberry Sour  34.21 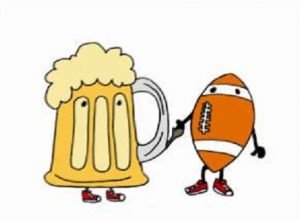 SASKATCHEWAN CRAFT BEER IN MOSAIC STADIUM. The 2018 edition of the Labour Day Classic was a historic moment for Saskatchewan Craft Brewers. For the first time ever Saskatchewan craft beer was made available inside the stadium! Three Saskatchewan breweries had products available in a “Craft Beer Corner” in the southwest part of the stadium. This is part of a four home game test to ascertain how Saskatchewan craft beer will enhance the experience of the fans. Because this is only a test and due to the considerable costs associated with installing more draught stations, only Saskatchewan craft breweries who have canned products were offered the opportunity to participate. Depending on how enthusiastically Saskatchewan craft brewed beer is embraced at Mosaic Stadium, additional draft beer lines may be installed in the future. For now, all eyes will be watching how this test progresses. The fans will decide with their taste buds and pride!

Sept. 7: FIRST FIRKIN FRIDAY. Enjoy the pomp and circumstance of this longstanding Bushwakker monthly tradition! A piper from The Regina Police Services Pipes & Drums leads a small keg (the firkin) of special ale throughout the pub in a procession. A guest volunteer tapper is selected to wield the handmade wooden maul affectionately named, The Mighty Firkin Wakker, and attempt to tap the keg in one swift blow! The September firkin offering will be a CHOCOLATE CHERRY WHEAT. The suds-soaking spectacular takes place at 5:30 PM. Sept. 10: Monday Night Jazz & Blues. JEFF MERTICK. Veteran Regina songwriter returns with his soulful vocals and New Orleans blues style. 8:00 PM. Sept. 12: Wednesday Night Folk. REGINA SONGWRITERS GROUP (A Regional Group of the Songwriters Association of Canada) & SASK MUSIC PRESENTS. Local singer/songwriters showcase featuring Luke Rossmo, Dale Mac, and Glenn Sutter. 8:00 PM. Sept. 13: OUTLAW TRAILS SPIRITS CRAFT DISTILLERY TASTING EVENT. Sample over a half dozen products from one of Regina’s newest craft distilleries. John & Charmaine Styles opened their doors in December 2016 in Regina’s Warehouse District. Their overall objective is to produce unique and flavourful spirits in a manner consistent with artisanal values using Saskatchewan raw products, with a focus on whiskies. Don’t miss this rare opportunity to meet the people behind the spirits and enjoy a presentation of the some of their vodkas, molasses rum, single malt and experimental grain spirits. Only 50 tickets will be made available and are $20 each. On sale now!

Sept. 15: SASK VS OTTAWA. Kickoff is at 7:30 PM. Enjoy our gourmet OTTAWA BURGER & A PINT game day special for only $18.95. Come “devour” the competition! Sept. 17: Monday Night Jazz & Blues. THE JAZZ BAND-ITS. Enjoy big band, jazz and swing from the largest band to ever grace the Bushwakker stage. 8:00 PM. Sept. 19: Wednesday Night Folk. SUN ZOOM SPARX. Funk, jazz fusion, psychedelia and mid-70’s ambience. 8:00 PM. Sept. 20: HEALTH SCIENCE PUB – Trojan Horse For MS Rescue! Presented by the Integrated Health Research Cluster. Our wildly popular Science Pub Series has returned for a seventh incredible season! Enjoy lectures on scientific topics of general interest in our Arizona Room (main floor banquet room) over beer and snacks. The room opens at 5:00 PM and quite often is full by 6:00 PM. Avoid disappointment and come down early for dinner and a pint before the presentation which begins at 7:00 PM. This month's lecture will be presented by Anastasye Kisheev, Faculty of Science, University of Regina. Many people are likely familiar with Greek mythology, with one of the more famous stories being that of Troy. Using principles in this legend, we are developing ways to treat Multiple Sclerosis (MS). MS is a devastating disease where the protective insulation around the nerve is destroyed. This leads to impairment of movement and unfortunately eventually death. Saskatchewan has the highest incidence of this disease in the world, but the cause remains very elusive. Unfortunately current treatments are lacking. We are currently developing a therapy to treat MS using the story of the Trojan horse as a guideline, demonstrating that myth and science very much go hand in hand.

Remember that Study Claiming no Amount of Alcohol is Safe? Here’s Why You Shouldn’t Worry!

Ethel checked into a motel on her 50th birthday. She was lonely and a little depressed at her advancing age so she decided to risk an adventure. She thought - I’ll call one of those men you see advertised in phone books for escorts and sensual massages. She looked through the phone book, found a full page ad for a guy calling himself Tender Tony, a very handsome man with assorted physical skills flexing in the photo. He had all the right muscles in all the right places, thick wavy hair, long powerful legs, dazzling smile, six pack abs!! She figured - What the heck, nobody will ever know, I’ll give him a call. “Good evening, ma’am, how may I help you?” Oh my, he sounded sooo sexy! Afraid she would lose her nerve if she hesitated, she rushed right in: “I hear you give a great massage. I’d like you to come to my motel room and give me one. No, wait, I should be straight with you. I’m in town all alone and what I really want is sex. I want it hot, and I want it now ... Bring implements, toys, everything you’ve got in your bag of tricks. We’ll go at it all night - tie me up, cover me in chocolate syrup and whipped cream, anything and everything, I’m ready! Now how does that sound?” He said, “That sounds absolutely fantastic, but you need to press 9 for an outside line.”