NEWS FROM THE BREWERY! Head brewer, Michael Gaetz, reports our seasonally available MOTHERWELL RHUBARB RED FIFE WITBIER, SUMMER WHEAT, LAST CHANCE CHERRY WHEAT, HARBINGER MAIBOCK and TWO SONS MILK STOUT are now on tap. A batch of KAI’S MUNICH HELLES and CHICO LIGHT SESSION IPA are also currently working their way through the brewery. Our GUEST TAP is currently pouring the Pineapple Pale Ale from Regina’s Pile O’ Bones Brewing. Next up is an Oat Session Ale from Black Bridge Brewing in Swift Current. Following that Pile O’ Bones is back with their Cranberry Sour! Our September premium red wine features are from the SHY PIG WINERY in Australia. The white is a Sauvignon Blanc and the red is a Shiraz. Both are $6.95 for a glass and $17.95 for a half litre. 650ml glass bottles of our number one selling DUNGARVON IRISH RED ALE are currently available at the Quance Street, Broadway Avenue and North Albert Street SLGA stores!!! The late Bushwakker co-founder and president, Bev Robertson’s name will live on forever at the newly revitalized University of Regina College Avenue Campus. Room #308 is a larger classroom overlooking Wascana Lake and the Legislative Building. Bushwakker general manager emeritus, Elaine Robertson, and current Bushwakker general manager, Kelly Monette, received a private tour of the beautiful room named in Bev’s honour at a preview opening of the multi-million dollar restoration project. Among many of Bev’s accomplishments, he was as a physics professor at the University of Regina for many years. He contributed $500,000 to the Johnson Shoyoma Graduate School of Public Policy which served as seed money and generated well over 40 million in additional funding for the university. 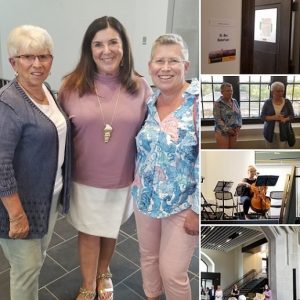 Vianne Timmons, president and vice-chancellor of the University of Regina with Bushwakker GM emeritus and current Bushwakker GM, Kelly Monette at a preview event of the revitalized College Avenue Campus where the Bev Robertson Classroom will be located. Congratulations to Justin Lacelle who won our Blackberry Mead Package Draw conducted at the Symphony Under the Sky event at the Motherwell Homestead on August 25th. Justin has won bottles of mead, glassware and a mead t-shirt.

Sept 1, 2 & 3: LABOUR DAY LONG WEEKEND BURGER BATTLE.  We welcome our many Manitoba friends who make their annual pilgrimage to the Bushwakker and the new Mosaic stadium. This is also the only weekend of the year where you can choose from either our Winnipeg Burger & a Pint feature or our Saskatchewan Burger & a Pint feature. History has shown that the burger which sells the best prior to the game is a strong indicator as to which team will win the Labour Day Classic! 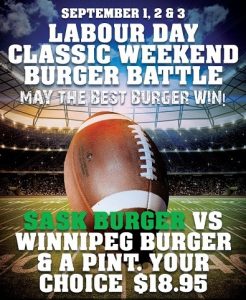 Sept. 1 - 3: LABOUR DAY LONG WEEKEND KEG EVENT. Receive free coasters, cups, ice and the use of a Bushwakker keg chiller tub and pump/faucet when you order any one of our four sizes of kegs for a long weekend. Place your order at least 24 hours in advance to avoid disappointment. Sept. 2: THE LABOUR DAY CLASSIC: OPEN AT 10:00 AM. Can Team Green produce a Labour Day Classic win this year? Join the Sea of Green at the Bushwakker for our Saskatchewan Burger & a Pint or a Winnipeg Burger & a Pint feature and to discuss the probable outcome before the 1:00 PM kick-off. Meet “Back at the Bush” to conduct your post-game analysis. Sept. 3: OPEN LABOUR DAY MONDAY. Monday Night Jazz & Blues. THE FUNKEY BRUNCH BAND. Talented sextet featuring bass, drums, piano and a brass section make their jazz funk debut. 8:00 PM. Sept. 5: ALES CLUB MONTHLY MEETING. After a two month summer break, one of North America’s top ranked homebrewing clubs is set to reconvene for another brewing season. The September meeting is historically the largest meeting of the year. This month’s presentation topics include: Munich Helles and Marzen as well as the German Purity Law. If you are interested in getting into the art of home brewing or would like to improve your skills, come to the Bushwakker basement clubroom at 8:00 PM and discover what the ALES Club can offer you. Sept. 5: Wednesday Night Folk. BRADFORD. Talented acoustic guitar duo featuring Brad Papp and Mark Radford. 8:00 PM. Sept. 7: FIRST FIRKIN FRIDAY. Enjoy the pomp and circumstance of this longstanding Bushwakker monthly tradition! A piper from The Regina Police Services Pipes & Drums leads a small keg (the firkin) of special ale throughout the pub in a procession. A guest volunteer tapper is selected to wield the handmade wooden maul affectionately named, The Mighty Firkin Wakker, and attempt to tap the keg in one swift blow! The September firkin offering will be a CHOCOLATE CHERRY WHEAT. The suds-soaking spectacular takes place at 5:30 PM. Sept. 10: Monday Night Jaz & Blues. JEFF MERTICK. Veteran Regina songwriter returns with his soulful vocals and New Orleans blues style. 8:00 PM. Sept. 12: Wednesday Night Folk. REGINA SONGWRITERS GROUP (A Regional Group of the Songwriters Association of Canada) & SASK MUSIC PRESENTS. Local singer/songwriters showcase featuring Luke Rossmo, Dale Mac, and Glenn Sutter. 8:00 PM. Sept. 13: OUTLAW TRAILS SPIRITS CRAFT DISTILLERY TASTING EVENT. Sample over a half dozen products from one of Regina’s newest craft distilleries. John & Charmaine Styles opened their doors in December 2016 in Regina’s Warehouse District. Their overall objective is to produce unique and flavourful spirits in a manner consistent with artisanal values using Saskatchewan raw products, with a focus on whiskies. Don’t miss this rare opportunity to meet the people behind the spirits and enjoy a presentation of the some of their vodkas, molasses rum, single malt and experimental grain spirits. Only 50 tickets will be made available and are $20 each. On sale now! Sept. 15: SASK VS OTTAWA. Kickoff is at 7:30 PM. Enjoy our gourmet OTTAWA BURGER & A PINT game day special for only $18.95. Come “devour” the competition!

The Fight for Local Craft Beer

Craft breweries inject culture, youth, and cash into communities. It’s no wonder towns across the country are fighting to get one. The citizens of Roanoke, Virginia, were desperate for a good drink. In the past ten years, five of America’s biggest craft brewers—Deschutes, New Belgium, Oskar Blues, Sierra Nevada, and Stone Brewing—all went in search of East Coast headquarters, and Roanoke, Mills River, North Carolina, and Philadelphia, among others, were tripping over each other to win their affection. In 2011, Mills River beat out Roanoke for Sierra Nevada, and in 2014 Roanoke lost out to rival Richmond, Virginia, for Stone. But the city of 99,800 refused to back down. After a hard-fought four-year pitch process that involved state and local governments earmarking up to $13 million worth of incentives for Deschutes and taking location scouts on big-wheel-tricycle rides, Roanoke became HQ2 for the Bend, Oregon, brewhouse. Deschutes is just one of over 6,000 craft breweries in the U.S., and the industry’s effects on the ground can be profound. According to a 2016 University of Montana economic study, 61 of the state’s craft breweries raised residents’ incomes by $33 million and helped employ 1,044 people. In Kent County, Michigan, home of Grand Rapids—known as Beer City USA—brewers generated more than $7 million in direct spending from visitors in a single year, according to one study. The impact on Roanoke could be even more substantial. Landing an operation on the scale of Deschutes is expected to create more than 100 jobs and generate more than $200 million in annual revenue. Currently, there is no construction date set for the Roanoke brewing facility, but the expansion is already transforming the midsize metro area, which is nestled in the Blue Ridge Mountains. The company hosts local charities at its new taproom and has established an East Coast cyclocross team, says Pete Eshelman, director of the Roanoke Outside Foundation. “Most of all, the people here felt like they were finally seeing the benefits of an overall reinvention of the town that’s been in the works for a while now,” he says. That’s not an uncommon sentiment, explains economic-development consultant John Karras. “Breweries can really help brand a community,” he says, pointing to the Northeast, where beer lovers instantly associate Dogfish Head with Milton, Delaware, and Otter Creek with Middlebury, Vermont. “And more important, it helps create a culture around young people and outdoor recreation.” As it turns out, those were the same qualities Deschutes was looking for when it went in search of an East Coast home. “Outdoor activities are really important for us as a company and for our culture,” says Deschutes president and CEO Michael LaLonde, who shared in the arduous task of biking and hiking the heck out of several candidate towns. Roanoke was not only flush with adventure, but it felt like a blank slate in much the same way Bend did 30 years ago. “Bend in the late 1980s was struggling quite a bit,” says LaLonde. “We had a significant impact on its growth. Brewing really does improve the economy, as well as tourism. The same holds true for Roanoke.”

The 6th grade science teacher, Mrs. MacGregor, asked her class, "What human body part increases to ten times its size when stimulated?" No one answered until little Mary stood up and said, "You should not be asking sixth-graders a question like that! I'm going to tell my parents, and they will go and tell the principal, who will then fire you!" Mrs. MacGregor ignored her and asked the question again, "Which body part increases to 10 times its size when stimulated?" Little Mary's mouth fell open. Then she said to those around her, "Boy, is she going to get in big trouble!" The teacher continued to ignore her and said to the class, "Anybody?" Finally, Billy stood up, looked around nervously, and said, "The body part that increases 10 times its size when stimulated is the pupil of the eye." Mrs. MacGregor said, "Very good, Billy," then turned to Mary and continued. "As for you, young lady, I have three things to say: One, you have a dirty mind. Two, you didn't read your homework. And three, one day you are going to be very, very disappointed."