NEWS FROM THE BREWERY! Head brewer, Michael Gaetz, reports our seasonally available SUMMER WHEAT, PINEAPPLE MANGO BLONDE ALE, HARBINGER MAIBOCK and TWO SONS MILK STOUT are now on tap. A batch of MOTHERWELL RHUBARB RED FIFE WITBIER, KAI’S MUNICH HELLES and CHICO LIGHT SESSION IPA are also currently working their way through the brewery. Our GUEST TAP is currently pouring the Pineapple Pale Ale from Regina’s Pile O’ Bones Brewing. Next up is an Oat Session Ale from Black Bridge Brewing in Swift Current. Our August premium red wine feature is ERRAZURIZ ESTATE CARMENERE from Chile. The white is FAT BIRD MARLBOROUGH SAUVIGNON BLANC from New Zealand. Both are $7.95 for a glass and $21.95 for a half litre. 650ml glass bottles of our number one selling DUNGARVON IRISH RED ALE are currently available at the Quance Street, Broadway Avenue and North Albert Street SLGA stores!!! The Bushwakker was the host venue for one of the largest homebrewing competitions in the country last April. The 25th annual ALES Open saw Trevor Armstrong from Toronto winning the Best of Show award for his English Barleywine. Part of Trevor’s recognition for this admirable feat was an invitation to come brew has national champion beer with Bushwakker head brewer, Michael Gaetz and assistant brewer, Bradley Dalrymple. The massive malty brew saw a wonderful day in the Bushwakker brewery earlier this month. Now the lengthy aging process begins. Trevor recommends aging this award-winning beer for at least a year. We’ll see just how long we can wait! 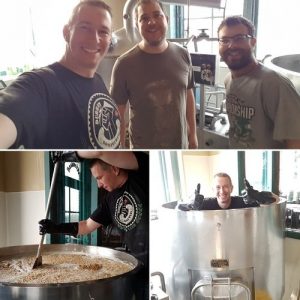 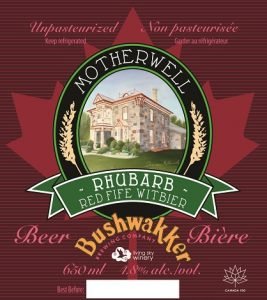 Aug. 25: Motherwell Red Fife Rhubarb Witbier Release at the Motherwell Homestead national historic site near Abernethy, Saskatchewan. Our Motherwell Red Fife Witbier infused with rhubarb juice from Living Sky Winery! A limited number of commemorative bottles will be produced. The label depicts an original painting of the Motherwell Homestead painted by Shannon Sambells  who is William Motherwell’s great, great granddaughter. This commerative brew will be available on tap and in bottles at The Bushwakker and at the Regina Symphony Orchestra’s Symphony Under the Sky at the Motherwell Homestead. We will be taking an even larger supply of bottles to the festive site this year so  hopefully we won’t run out! Makes a great Saskatchewan keepsake. Aug. 27: Monday Night Jazz & Blues. CALL ME MILDY. Blues/rock, slide & harmonica blues peppered with reggae-laden melodies. We don’t get a chance to hear this act often so don’t miss this rare opportunity! 8:00 PM. Aug. 29: Wednesday Night Folk. WINNIE BRAVE. Alberta touring folk duo plays classic folk, country, classic rock and mid-century pop. 8:00 PM. Sept 1, 2 & 3: LABOUR DAY LONG WEEKEND BURGER BATTLE.  We welcome our many Manitoba friends who make their annual pilgrimage to the Bushwakker and the new Mosaic stadium. This is also the only weekend of the year where you can choose from either our Winnipeg Burger & a Pint feature or our Saskatchewan Burger & a Pint feature. History has shown that the burger which sells the best prior to the game is a strong indicator as to which team will win the Labour Day Classic! Sept. 1 - 3: LABOUR DAY LONG WEEKEND KEG EVENT. Receive free coasters, cups, ice and the use of a Bushwakker keg chiller tub and pump/faucet when you order any one of our four sizes of kegs for a long weekend. Place your order at least 24 hours in advance to avoid disappointment. Sept. 2: THE LABOUR DAY CLASSIC: OPEN AT 10:00 AM. Can Team Green produce a Labour Day Classic win this year? Join the Sea of Green at the Bushwakker for our Saskatchewan Burger & a Pint or a Winnipeg Burger & a Pint feature and to discuss the probable outcome before the 1:00 PM kick-off. Meet “Back at the Bush” to conduct your post-game analysis. Sept. 3: OPEN LABOUR DAY MONDAY. Monday Night Jazz & Blues. THE FUNKEY BRUNCH BAND. Talented sextet featuring bass, drums, piano and a brass section make their jazz funk debut. 8:00 PM. Sept. 5: ALES CLUB MONTHLY MEETING. After a two month summer break, one of North America’s top ranked homebrewing clubs is set to reconvene for another brewing season. The September meeting is historically the largest meeting of the year. This month’s presentation topics include: Munich Helles and Marzen as well as the German Purity Law. If you are interested in getting into the art of home brewing or would like to improve your skills, come to the Bushwakker basement clubroom at 8:00 PM and discover what the ALES Club can offer you. Sept. 5: Wednesday Night Folk. BRADFORD. Talented acoustic guitar duo featuring Brad Papp and Mark Radford. 8:00 PM. Sept. 7: FIRST FIRKIN FRIDAY. Enjoy the pomp and circumstance of this longstanding Bushwakker monthly tradition! A piper from The Regina Police Services Pipes & Drums leads a small keg (the firkin) of special ale throughout the pub in a procession. A guest volunteer tapper is selected to wield the handmade wooden maul affectionately named, The Mighty Firkin Wakker, and attempt to tap the keg in one swift blow! The suds-soaking spectacular takes place at 5:30 PM. Sept. 10: Monday Night Jaz & Blues. JEFF MERTICK. Veteran Regina songwriter returns with his soulful vocals and New Orleans blues style. 8:00 PM. Sept. 12: Wednesday Night Folk. REGINA SONGWRITERS GROUP (A Regional Group of the Songwriters Association of Canada) & SASK MUSIC PRESENTS. Local singer/songwriters showcase featuring Luke Rossmo, Dale Mac, and Glenn Sutter. 8:00 PM. Sept. 13: OUTLAW TRAILS SPIRITS CRAFT DISTILLERY TASTING EVENT. Sample over a half dozen products from one of Regina’s newest craft distilleries. John & Charmaine Styles opened their doors in December 2016 in Regina’s Warehouse District. Their overall objective is to produce unique and flavourful spirits in a manner consistent with artisanal values using Saskatchewan raw products, with a focus on whiskies. Don’t miss this rare opportunity to meet the people behind the spirits and enjoy a presentation of the some of their vodkas, molasses rum, single malt and experimental grain spirits. Only 50 tickets will be made available. Only $20 each.

From the BA Insider Much has been written about the purchase habits of millennials in recent years, but they still represent only 40 percent of craft beer drinkers. As brewers and distributors, it is critical we continue marketing effectively to both Generation X and baby boomers as well, who collectively account for more than 55 percent of craft beer drinkers today. Non-Millennials Prioritize Value According to a 2016 study from IRI Worldwide, “Baby boomers remain more likely than millennials and Gen Xers to drink once a week or more at home.” Unlike the younger generation, boomers are more concerned with finding strong value than maximizing their choice when making a purchase decision. Since non-millennials drink less than millennials, they seek out higher-quality products, not just in beer but in most consumer packaged goods (CPG) categories. Non-Millennials Drink at Home Since maximizing value is a factor in non-millennial purchase decisions, consumers are choosing to eat and drink more at home. While foot traffic at most casual dining restaurants continues to decline, many restaurants are experiencing a significant boost in their take-out sales. Gen Xers reported enjoying an average of 3.6 different types of alcohol at home over the previous 3 months, according to IRI. Non-Millennials Seek Variety While dining at home is on the rise, the search for great craft beer still drives consumers to seek variety on a regular basis. According to a recent Nielsen study, non-millennials visit an average of 2.5 breweries near their house (within 2 hours) and 1.6 while travelling a year. They represent 45 percent of local brewery visits and 40 percent of travelling visits. Non-millennials are (slightly) more brand loyal than their younger counterparts, however. 75 percent of millennials said that they at least sometimes “purchase a craft beer brand that [they] have never seen advertising for or heard of,” compared to 68 percent for non-millennials. Overall Craft Beer Stats to Watch Although the popularity of craft beer in general continues to rise, we still have a massive audience of consumers who do not regularly enjoy a fresh, independent craft beer. In fact, only 11 percent of millennials enjoyed a craft beer in the past month. For the older generations, that figure is even lower – 8.6 percent of Gen Xers and 5.7 percent of boomers. Even more concerning is the declining number of adult males between the ages of 21-27 who consider beer their primary alcoholic beverage. In 2006, 65 percent of males listed beer as their go-to drink in the beverage alcohol category. Fast forward to 2016 and that figure has dropped all the way to 43 percent. Overall, beer is increasingly losing share to wine and spirits—especially among millennials—at a concerning rate. But with innovation and positive messaging from our industry, we can again become the alcoholic beverage of choice by giving both millennials and non-millennials beverages that fit their changing needs. 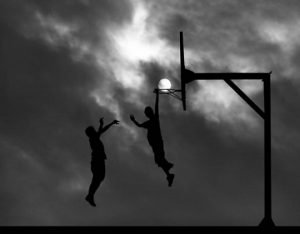