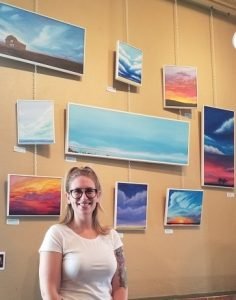 The Bushwakker LOCAL ARTIST WALL for the month of August features the works of HALEY GARTNER. In addition to being a talented artist, Haley is a former Bushwakker server. Her artist bio is as follows: Haley Gartner is a University of Regina Fine Art alumni. During her degree she experimented with multiple mediums and techniques; charcoal, pencil, pen, acrylic paint, sculpture paintings, bronze working, wood working, ceramics, and many others. But her heart fell into oil painting. Now she focuses on landscapes based from her home city Regina, Saskatchewan. Finding the simplicity, and vastness both inspiring and humbling. Now she is back in school for Graphic Design at Regina Sask PolyTechnic so she paints for herself most days, unless it is a commission.  To explore Haley’s talents even further please visit her website at www.haleygartner.com

Aug. 13: Monday Night Jazz & Blues. 8’S ENUFF. Mini big band packs a powerful punch. 8:00 PM. Aug. 15: Wednesday Night Folk. ZULU PANDA & JOSH GONZOLES. A talented double bill featuring both a local and a touring artist. 8:00 PM. Aug. 17: MOTHERWELL RHUBARB RED FIFE WITBIER “SNEAK PEEK” FIRKIN at 5:30 PM. The Bushwakker is a proud partner of Parks Canada and Living Sky Winery this summer and will once again brew the extremely popular Motherwell Homestead commemorative brew. To acknowledge the fact that William Motherwell abstained from alcohol and preferred rhubarb tea, the Motherwell Red Fife Witbier will utilize the historic Red Fife wheat as well as rhubarb juice from Saskatchewan’s Living Sky Winery. Motherwell Homestead interpreters will be at the Bushwakker for a special Firkin Preview tapping. They will be wearing period dress, and will briefly describe the big Motherwell Threshing Day/Symphony Under The Sky event which will take place just outside of Abernethy, Saskatchewan on Saturday, August 25th where this unique Belgian-style wheat beer will be officially released. A limited number of commemorative bottles will be produced and made available on August 25th. The label will depict an original painting of the Motherwell Homestead drawn by Shannon Sambells who is William Motherwell’s great, great granddaughter. Makes a great Saskatchewan keepsake! 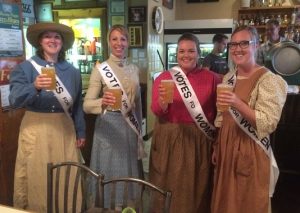 Staff members from the Motherwell Homestead will be participating in a special preview firkin tapping of the 2018 Motherwell Rhubarb Red Fife Witbier at 5:30 PM on Friday, August 17th. Aug. 19: SASK VS. CALGARY. We open at noon for the first Sunday football contest of the season. Enjoy our gourmet CALGARY BURGER & A PINT game day feature for only $18.95 before the 5:00 PM kickoff. Aug. 20: Monday Night Jazz & Blues. THE MINISTRY OF GROOVE. Fine 1970’s jazz funk and beyond with a great horn section. 8:00 PM. Aug. 22: Wednesday Night Folk. THE RED WAGON GYPSIES. Acapella/acoustic harmonies from Angela Ell and Tamara Scrimbit. It doesn’t get more “folkier” than this! 8:00 PM. Aug. 25: Motherwell Red Fife Rhubarb Witbier Release at the Motherwell Homestead. Our Motherwell Red Fife Witbier infused with rhubarb juice from Living Sky Winery. A limited number of commemorative bottles will be produced. The label will depict an original painting of the Motherwell Homestead painted by Shannon Sambells who is William Motherwell’s great, great granddaughter. Will be available on tap and in bottles at The Bushwakker and at the Regina Symphony Orchestra’s Symphony Under the Sky at the Motherwell Homestead. Aug. 27: Monday Night Jazz & Blues. CALL ME MILDY. Blues/rock, slide & harmonica blues peppered with reggae-laden melodies. We don’t get a chance to hear this act often so don’t miss this rare opportunity! 8:00 PM. Aug. 29: Wednesday Night Folk. WINNIE BRAVE. Alberta touring folk duo plays classic folk, country, classic rock and mid-century pop. 8:00 PM. We still have a few weeks left to get away for a summer beer-cation. If you are planning on heading south this month, there are some great Craft Beer Trails you may wish to visit.

Two men were adrift in a lifeboat following a dramatic escape from a burning freight vessel. While rummaging through the boat's provisions, one of the men stumbled across an old lamp. Secretly hoping that a Genie would appear, he rubbed the lamp vigorously. To the amazement of the castaways, one did come forth. This particular Genie, however, stated that he could only deliver one wish, not the standard three. Without giving much thought to the matter the man blurted out, "Make the entire ocean into beer!" Immediately the Genie clapped his hands with a deafening crash, and the entire sea turned into the finest brew ever sampled by mortals. Simultaneously, the Genie vanished to his freedom. Only the gentle lapping of beer on the hull broke the stillness as the two men considered their circumstances. The other man looked disgustedly at the one whose wish had been granted.  After a long, tension-filled moment, he spoke: "Nice going! Now we're going to have to pee in the boat."