NEWS FROM THE BREWERY! Head brewer, Michael Gaetz, reports our seasonally available HONEY THISTLE WIT, HARBINGER MAIBOCK, PEACH PASSION FRUIT BLONDE ALE, and TWO SONS MILK STOUT are now on tap. A batch of KAI’S MUNICH HELLES and CHICO LIGHT SESSION IPA are also currently working their way through the brewery. SUMMER WHEAT will soon make its triumphant return! Our guest tap is currently pouring the Rumple Plum Skin Plum Sour from Regina’s Malty National Brewing. Following that the Nokomis Craft Ales Summer Kettle Sour will be flowing. Our premium wines for the month of July are from the VILLA TERESA WINERY in Italy. The red is their ORGANIC MERLOT and the white is an ORGANIC PINOT GRIGIO. Both are $8.95 for a glass and $24.95 for a half litre. Our number one selling DUNGARVON IRISH RED ALE is currently available at the Quance Street SLGA store Growler Filling Station. Bushwakker executive chef, Mike Monette, has recently “kicked-up” his weekend STEAK & A PINT SPECIAL. The “New & Improved” version features a six ounce sirloin steak charbroiled to your specifications and is presented on a baguette with arugula salad, balsamic marinated mushrooms, smoked cheddar, dijon mayo and chimichurri sauce. Served with our award winning fries and a pint of any regular Bushwakker beer for only $19.95! This delicious great value is available very Saturday and Sunday! 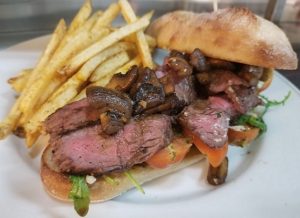 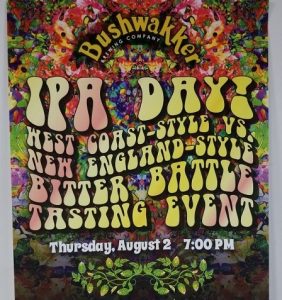 Aug. 3: FIRST FIRKIN FRIDAY. Enjoy the pomp and circumstance of this long standing Bushwakker monthly tradition. A piper from the Regina Police Services Pipes and Drums leads a keg of special brew in a procession throughout the brewpub. A guest volunteer is selected to wield the handmade wooden maul affectionately referred to as The Mighty Firkin Wakker, and attempt to tap the firkin in one mighty blow. Hopheads rejoice! In acknowledgement of the IPA Day festivities taking place the previous day, the August firkin offering will be an AZACCA DRY-HOPPED IPA. The Azacca hop profile is described as being intense and tropical. Sustained impressions of citrus and very ripe mango, with notes of orchard fruit and pine needles. The delicious suds-soaking experience takes place at 5:30 PM. Aug. 3 – 6: AUGUST LONG WEEKEND KEG EVENT. Receive free coasters, cups, ice and the use of a Bushwakker keg chiller tub and pump/faucet when you order any one of our four sizes of kegs for a long weekend. Place your order at least 24 hours in advance to avoid disappointment. Aug. 6: OPEN NOON TO NINE for the holiday! Happy Saskatchewan Day! Aug. 8: Wednesday Night Folk – Special Edition. JON BROOKS. Toronto artist holds the dubious record of most nominations for “Songwriter of the Year” at the Canadian Folk Music Awards. 8:00 PM. Aug. 13: Monday Night Jazz & Blues. 8’S ENUFF. Mini big band packs a powerful punch. 8:00 PM. Aug. 15: Wednesday Night Folk. ZULU PANDA & JOSH GONZOLES. A talented double bill featuring both a local and a touring artist. 8:00 PM. Aug. 17: MOTHERWELL RHUBARB RED FIFE WITBIER “SNEAK PEEK” FIRKIN at 5:30 PM. The Bushwakker is a proud partner of Parks Canada and Living Sky Winery this summer and will once again brew the extremely popular Motherwell Homestead commemorative brew. To acknowledge the fact that William Motherwell abstained from alcohol and preferred rhubarb tea, the Motherwell Red Fife Witbier will utilize the historic Red Fife wheat as well as rhubarb juice from Saskatchewan’s Living Sky Winery. Motherwell Homestead interpreters will be at the Bushwakker for a special Firkin Preview tapping. They will be wearing period dress, and will briefly describe the big Motherwell Threshing Day/Symphony Under The Sky event which will take place just outside of Abernethy, Saskatchewan on Saturday, August 25th where this unique Belgian-style wheat beer will be officially released. A limited number of commemorative bottles will be produced and made available on August 25th. The label will depict an original painting of the Motherwell Homestead drawn by Shannon Sambells who is William Motherwell’s great, great granddaughter. Makes a great Saskatchewan keepsake! Aug. 19: SASK VS. CALGARY. We open at noon for the first Sunday football contest of the season. Enjoy our gourmet CALGARY BURGER & A PINT game day feature for only $18.95 before the 5:00 PM kickoff.

The Short History and Uncertain Future of CBD Beer

A priest, a doctor, and an engineer were waiting one morning for a particularly slow group of golfers. The engineer fumed, "What's with those guys? We must have been waiting for fifteen minutes!" The doctor chimed in, "I don't know, but I've never seen such inept golf!" The priest said, "Here comes the green-keeper. Let's have a word with him." He said, "Hello George, what's wrong with that group ahead of us? They're rather slow, aren't they?" The green-keeper replied, "Oh, yes. That's a group of blind firemen. They lost their sight saving our clubhouse from a fire last year, so we always let them play for free anytime." The group fell silent for a moment. The priest said, "That's so sad. I think I will say a special prayer for them tonight." The doctor said, "Good idea. I'm going to contact my ophthalmologist colleague and see if there's anything he can do for them." The engineer said, "Why can't they play at night?"